Camille Sledge apologizes when I finally connect with her. Her mom kept her on the phone too long—something that happens often to her and to others who are close with their parents. Sledge’s mom is a typical mother, apart from the fact that, well, she was part of the super group Sister Sledge, which created the international hit “We Are Family” in 1979 at the height of disco.

Some artists are reticent to talk about their influences because it might expose their work as mimicry or seem to discredit their individual aesthetic, but with Sledge—who is the lead singer of Phoenix Afrobeat Orchestra—it’s obvious who her main influence is, and she’s not shy about it.

“I saw my mom [while] growing up,” said Sledge. “I saw how she was able to reach people. I would see people cry and thank her.” 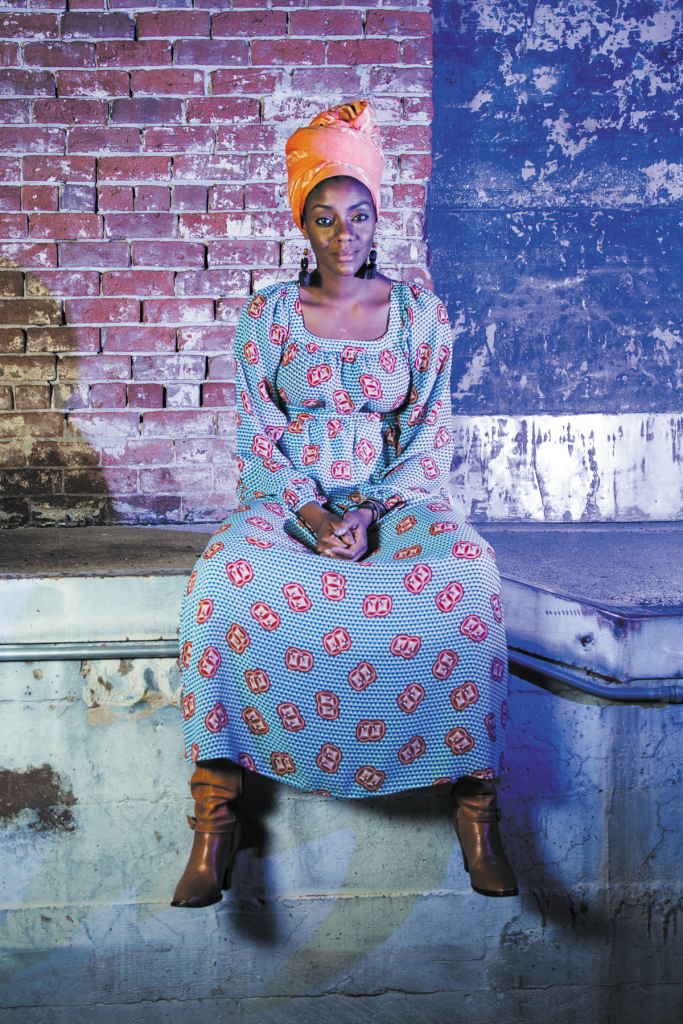 It wasn’t until Sledge became a mother herself—she has three-year old daughter and an eight-month old son—that she realized her true calling in music was to continue the positive message espoused by her mother.

Her mother performed with the Jackson 5 and other huge acts, but in ordinary life she was one of the people. She would walk into grocery stores wearing sweats and her hair in a bun; she’d feed and pray for every homeless person she came across. That’s just the type of person she was, Sledge said. Though fame required her to travel, Sledge remembers her mom always being there for her.

“My mom was the one constant. I don’t know if she knows that, but she was a very good mom. She raised six of us and none of us are addicts or in jail,” Sledge said.

What stands out to Sledge is her mom’s ability to be a universal mother to the world—to see the world as hurting and in need of family, in need of a hand. Sledge wants to help provide to that to people through her music, as well.

In that way, the proverbial apple didn’t fall far from the tree. But in many other ways Sledge is her own person. Whereas her mom would walk into a grocery store in normal, humble clothes, Sledge would be just fine walking in wearing a fur coat and sunglasses. Sledge is one of those people who likes to talk about herself; it’s natural and reflects a deep self-awareness that was nurtured by her caring mother, whose shadow she felt she lived in as a performer for a while. She doesn’t have the voice of her mother—the booming R&B voice that’s typified by modern singers like Beyonce. Instead her voice lends itself to funk and soul a bit more. Her voice was a natural fit for the local super group PAO, a 15-member band that plays in the Afrobeat tradition of Fela Kuti and Tony Allen and has shared a stage with The Roots and George Clinton, to name a few.

Sledge lived as a gypsy of sorts before she settled in Arizona. She was always galvanized by music. At one point she was part of a rap group in New York, but they were criticized for sounding too much like The Fugees. When she arrived in Arizona she wasn’t really aware of the music going on in Phoenix until a friend told her about PAO and that they were looking for a vocalist. She went to the rehearsal intending perhaps to sing vocals on a few tracks, but after the rehearsal they asked her to become the lead singer. What felt good to Sledge was the fact that they did this purely off the strength of her voice—they hadn’t seen her perform, yet.

Sledge is a self-professed ham on stage, and she is able to take on a litany of forms.

“I like to act; I’m an actress. I need to do something more theatrical on stage. There was never an opportunity for me to do that with just one genre of music. I can dance like nobody’s business. I can go outside of my own body with PAO and I can also rap and sing folk.”

In that way, Sledge is a full tour de force on the stage, whipping her body and voice with every inclination in her spirit to the tribal rhythms brought out by the band.

It seems like Sledge has found her fit and lives without regrets these days, living a life of purpose and calm.

“I have moved around a lot, lived in like seven different states. I am a Gemini. We like change, new things. We like to explore. When you have kids you have to have some stability for them, so that’s good for the band situation. I normally wouldn’t stay anywhere for very long. I might be somewhere for two or three years, then I’d be out. Now I am getting this new visual on what life is supposed to be,” said Sledge.

In terms of its message, PAO is inherently political, yet it tries to reach many different people on myriad levels. According to Sledge, anyone can make a good groove, anybody can make a song to dance to, but not anybody can make a great song. The difference, for Sledge at least, is whether the song can affect someone positively. If a song with a great groove has a negative message, then it is not a great song—it’s just a great groove.

As the primary songwriter for PAO, Sledge is trying to dismantle the prevailing social injustices of the world one song at a time. PAO’s album, set for release at the beginning of the year, includes a song called “Come With Us” that is a continuation of the “We Are Family” message.

As Sledge puts it, “I’m part of you, you’re part of me. Let’s help each other breathe.”

The teamwork inherent in the conglomeration of PAO, bringing 15 people together to breathe and act as one musical organism, reflects the reality of the planet: we need each other in all our divergent pieces.

PAO has a song that addresses police brutality, which is an issue that’s been in the spotlight of late. However, many of PAO’s songs address long-standing issues in the world that are often ignored. In that way, PAO is here to remind us of the old African (though not limited to that) values that can help bring us back to our core. PAO is a call back to the beat of the world—the beat of love as a revolution where we all have a part to play because we need each other to make a joyful noise.

“There are so many things you can do with a microphone. [And] now we have the Internet. There’s some power behind that. If you can say something important it is worth it to try,” said Sledge.

For Sledge, it all comes back to being a mom. She describes herself as a mom first, then an artist and activist. Her role as a mother informs everything else in her life and how she views music especially. Like her own mother, Sledge reaches out to the world and offers a hand. She shares her voice, not to speak for the world but to speak with the world. To sing in agony and joy, to dance in wonderment and abandonment, but unequivocally to join the cacophony of sound of the miracle called earth.

Music means a lot of things to different people. In its most raw form it is a reaction to the earth. It is African in root, indigenous in voice and powerful in all of its manifestations. For Sledge, language adds a beautiful dynamic that pushes music into the realm of soul therapy. She is helping liberate the earth from itself in many ways.