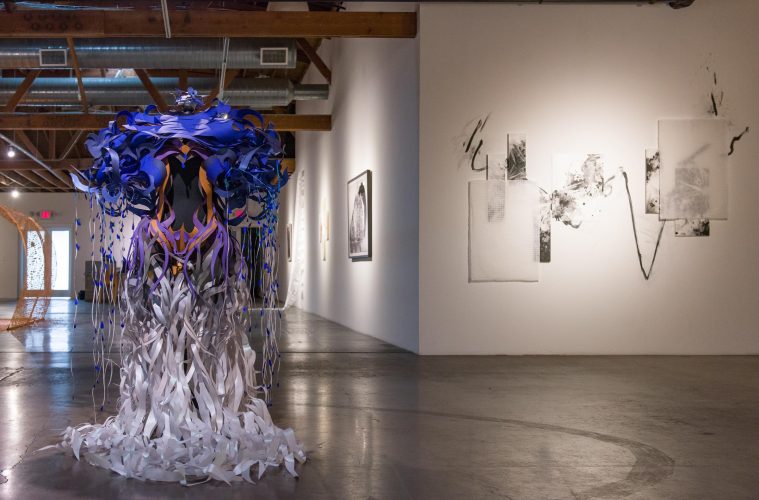 In, On and Of Paper At Bentley Gallery

Paper, as opposed to precursors such as papyrus, has only been around for about 2,000 years – its exact origins are unknown. The earliest documented papermaking process can be traced back to second-century China and Cai Lun, who is often regarded as the inventor of paper. Over the course of several centuries, his invention traveled into the Islamic world and then to Europe, where the wood-based paper of modern times would eventually be developed in the nineteenth century. The twenty-two artists in In, On and Of Paper, all of whom happen to be women, approach paper from a variety of angles: as a substrate, a raw material, a document.

Presented at Bentley Gallery and curated by Rembrandt Quiballo, the exhibition is cohesive and well organized. Showcasing a wide range of artistic voices while maintaining a sharp yet varied focus on its subject, the exhibition stands as a testament to the versatility of paper as both a primary artmaking material and a reliable substrate for drawing, printmaking and collage. Part of its success lies in its presentation of a spectrum of approaches rather than limited groupings of like-with-like. 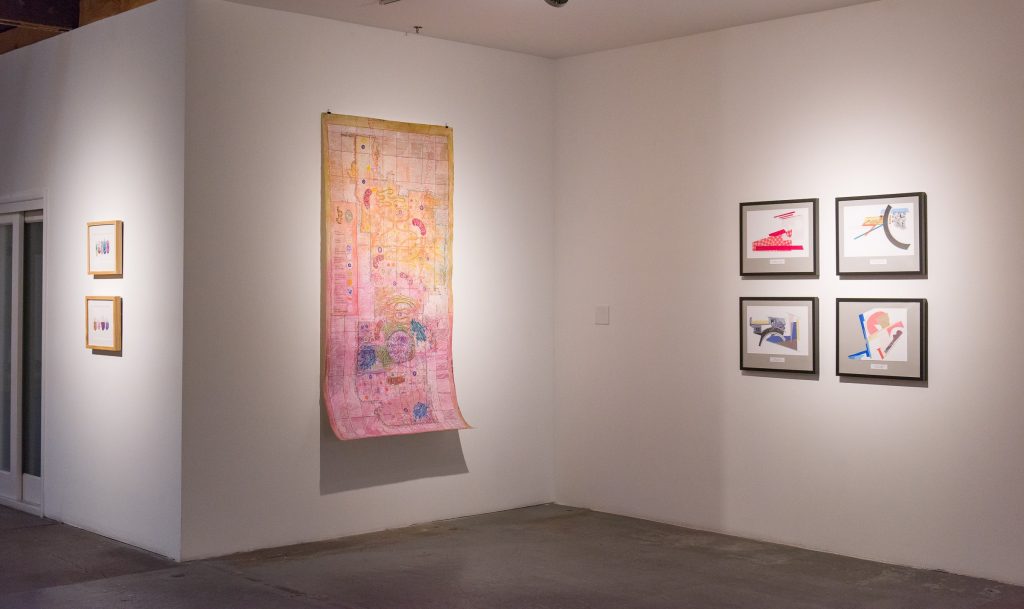 The exhibition highlights paper’s contradictory relationship to both spontaneity and order. Paper indeed lends itself to improvisation (jotting down, if you will), but there’s always the limit of the sheet itself. In Kenosha Drucker’s works on paper, amorphous compositions ooze throughout the surface. Contoured by delicate black line, the liquid forms become strange configurations – one a humanoid blob, the other a muddled landscape. Ashley Macias’s Anatomical Reflections utilizes a similar mode of operation, but with a sense of neurotic abandon. Lines zip and zoom around to form a human head, depict an eyeball over here, scribble a message down there. Once your eye does find a place to settle, it simply goes for another spin.

Paper goes hand-in-hand with knowledge. Monica Aissa Martinez’s A Human Cell as the City of Phoenix, as the title suggests, approaches the built environment of Phoenix as a microscopic organism. Equal parts playful and politically resonant, the work combines urban mapping and cell biology, suggesting the means by which we navigate the world on both a micro and a macro scale. The city, an organized grid with constructed hierarchies and pathways, guides the movements of its inhabitants. Government offices reside in the nucleus, along with the arts district.

Several other works in the show approach paper with the diagrammatic language of science and mathematics. The works in Lena Kelt’s Just Another Rock series are small renderings of natural forms that mix the visual references of geometry, stratigraphy and topography. As diagrams, the works seem to operate wholly under their own logic. Estrella Payton Esquillin’s material assemblages borrow from mapping and architecture. The disparate components of these collages – painter’s tape, graph paper, blueprints – undergo a kind of poetic classification in the short text fragments that caption each work. In the two works on paper by Danielle Hacche, the artist arranges shapes and lines into balanced configurations that resemble physics diagrams. 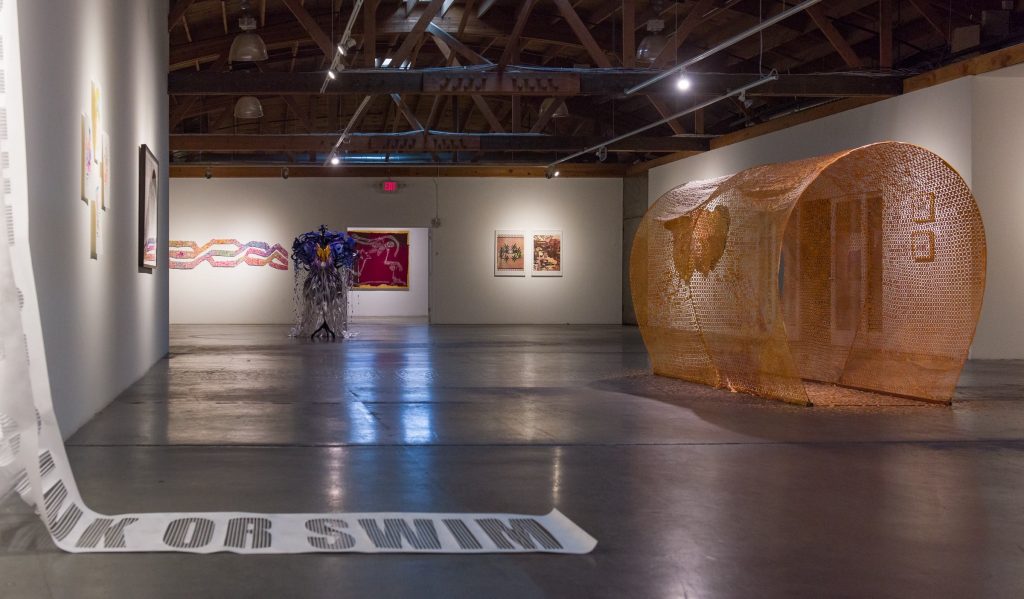 The only video work in the show, Topology by Ashley Czajkowski, is an homage to Dr. Alice B. Stockham, whose 1888 book of the same title foregrounded her as a radical figure in obstetrics and gynecology. Projected onto the top of an antique table, the video features a narrator perusing the blurred-out book, providing focus on its pages with a magnifying glass. A distorted voice reciting fragments of the book’s passages becomes a ritualistic hum. The work grapples with the relationship between women’s bodies and the medical industry, favoring a more natural and spiritual approach.

A sense of the transformative reverberates throughout the show. Works by Annie Lopez and Katharine Leigh Simpson turn paper into wearable garments that convey identity. Sam Fresquez’s Nesting, a hand-cut paper tunnel situated in the center of the gallery, delicately catches light as you move around it. Cece Cole’s installation exemplifies paper’s materiality and plays with luminance, transparency and shadow. Arizona Fault Line by Beth Ames Swartz, the only work not made in the last several years, floats on the wall yet embodies the weight of volcanic rock. 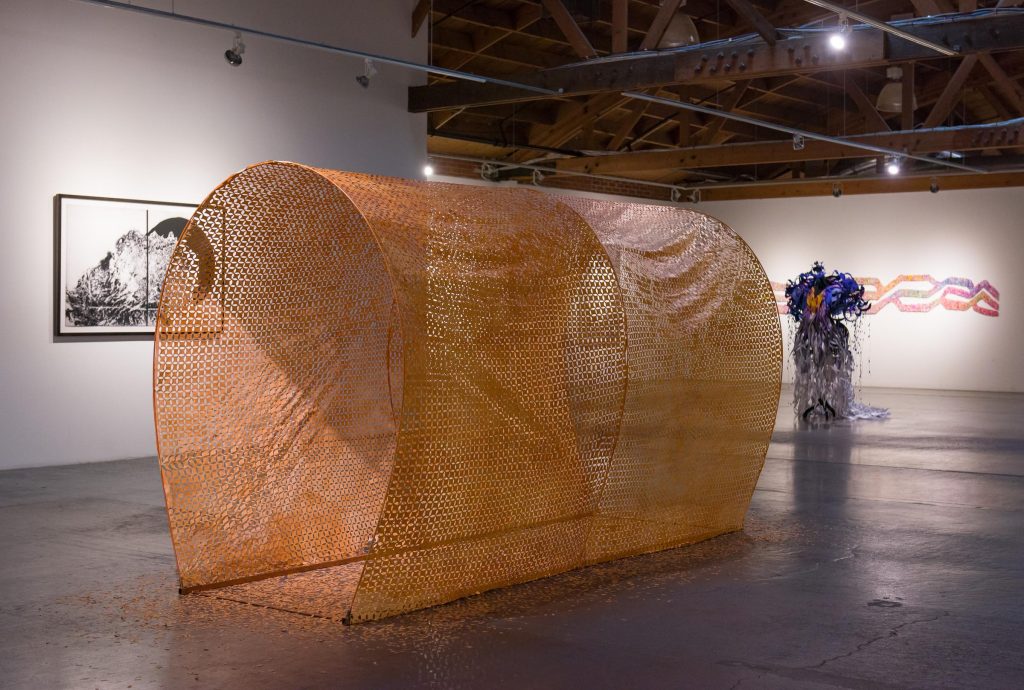 Paper is presented in this exhibition as a material that knows no bounds and has an extensive range of implications. Not only can it serve as a stand-in for other materials, such as fabric, metal or glass, but its status as a foundation of our everyday lives (which, today, might often be overlooked) positions it as one of the most important inventions in human history.

In, On and Of Paper