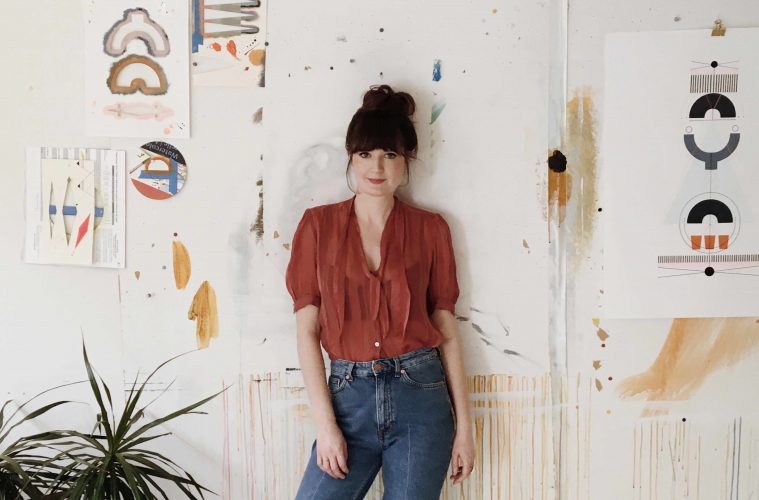 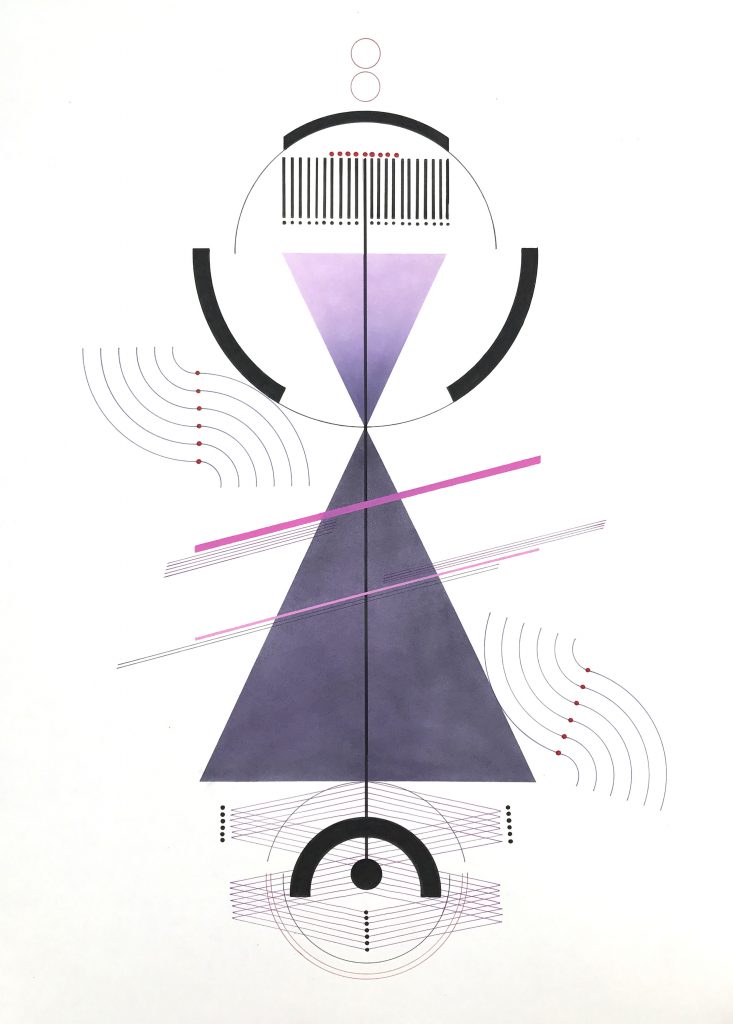 Phoenix-based artist Danielle Hacche’s recent work is a series titled Coalescing Form and Focus. These pieces feature pastel, acrylic, gouache and micron pen on paper in geometric abstractions. Her crisp and clean lines bring her astute sense of composition to the fore, while thoughtful uses of shapes and colors combine for sharp, dynamic and engaging results. We chatted with her about her work, its history and what’s next.

Tell us about when you started making art.

To be honest, I can’t remember a time when I wasn’t making art. From a very young age I excelled at art in school, and it was the only class I looked forward to. I went to New School for the Arts for high school, and that’s when I knew I wanted to get an art degree in college. I did a foundation year at Falmouth College of Art and Design, primarily studying painting. That led to a scholarship to the School of the Art Institute of Chicago, where I further honed my technical abilities. It helped me refine my style, along with everything it took to consider art as a possible career.

What inspired this current body of work?

My most recent work has evolved a little this last year. I began the series six years ago, but it had a little more of a Southwest feel. In the last year, it’s been heavily influenced by early 20th century Modernist art and architecture, especially from the German Bauhaus and those that it influenced, like the Brutalist movement that began in the 1950s in England. The large monoliths of raw concrete with emphasis on the natural textures of the material and the geometric shapes are an aesthetic I adore. I love working on paper with pastels or gouache, in a similar way, to allow the textures to enhance the overall image.

What do you notice about the evolution of your work since you started making art?

My work in high school was a lot messier. I was just developing my own style and turned to the likes of Basquiat, for reference. Same thing in my early college years. In my last year of college, I began a cleaner, more minimal look, with emphasis on the materials and color. I was pouring paint at that time to give me a very flat, shiny surface. That became too messy for me, so I’ve simplified things even more now to a very minimal aesthetic. 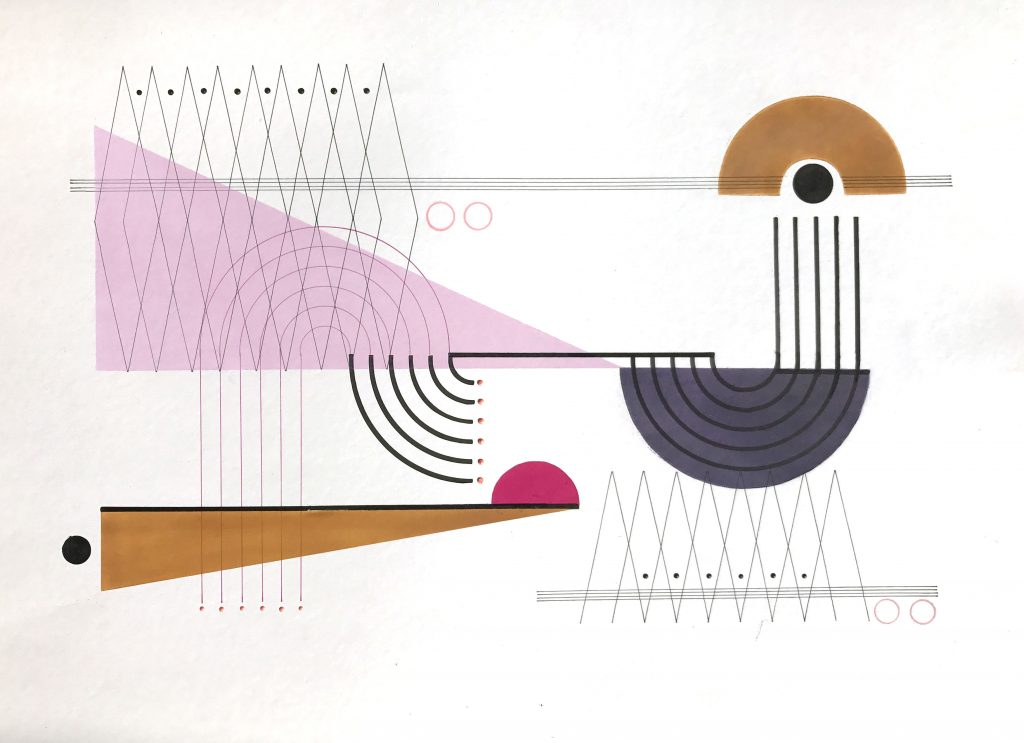 Your work exemplifies an affinity for precision – does that play into the message you want to convey?

When I go into the studio to paint, it’s a time of focus for me. I can completely concentrate and still my mind. I’m mostly a process painter, so I’m not overly concerned about conveying a message to a potential observer. With all the noise out there, it’s exactly what I want to escape from in the studio. I appreciate art with an agenda, but personally I choose to avoid making too many statements within my work.

You were showing in the phICA shipping containers (on Roosevelt) in December. Work in one of the containers by Bob Carey was controversial, due to a portrait of the artist in blackface. The curators pulled his show. Subsequently, you chose to take your work down, too. Can you tell us why?

I didn’t feel it was appropriate to continue showing, in light of the reaction to the show next door to mine. I only saw the work Bob Carey was displaying on the day of the opening. I felt similarly confused, initially, and then concerned by the imagery and intentions of the artist. Without an artist statement, there was no context in which to view the work, so therefore we had to make up our own assumptions. I was a bit consumed at the time with launching my exhibition, but the public reaction reinforced my initial gut feeling and, even though Carey’s show was removed, it still didn’t feel right for me to continue exhibiting within that environment. 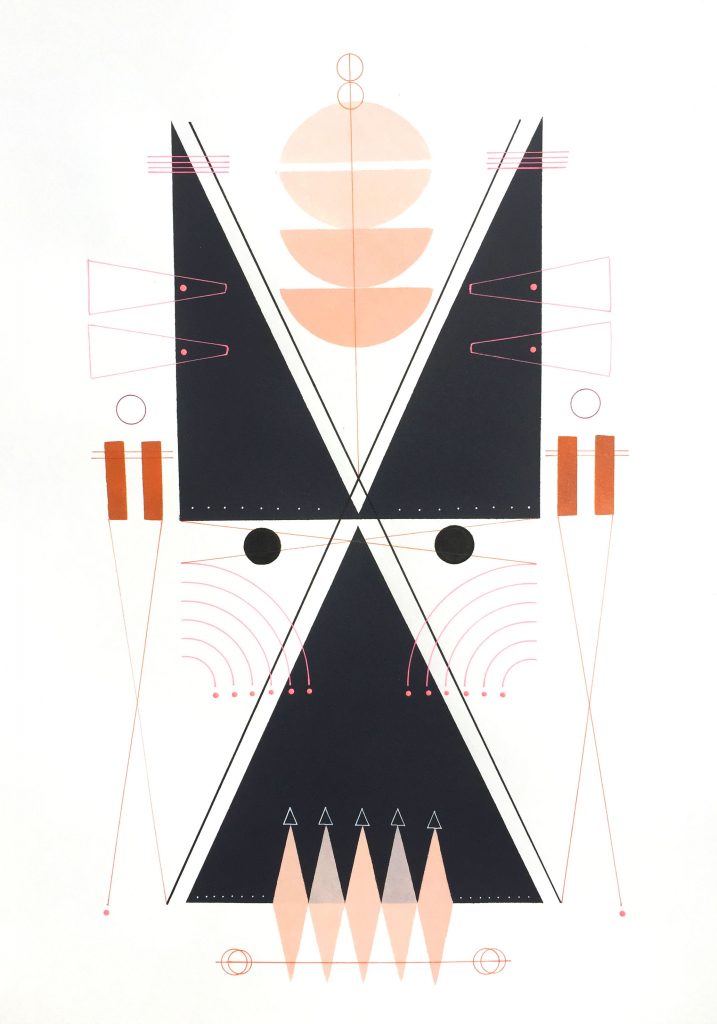 What’s next for you?

I’m in my studio every week working on new pieces. Most of this series is on paper, and that limits me, regarding materials and size, so I’m toying with the idea of larger-scale works on a new substrate. I see some experimentation in the near future.

What do you hope people take with them from your work?

I hope they take away the stillness I experience when creating them. Making art is a meditative process for me, and I hope others gain a quiet moment to observe whatever it is they want to take away from the imagery. People are always trying to make out something in the geometric shapes, so it’s always fun to hear the different perspectives. 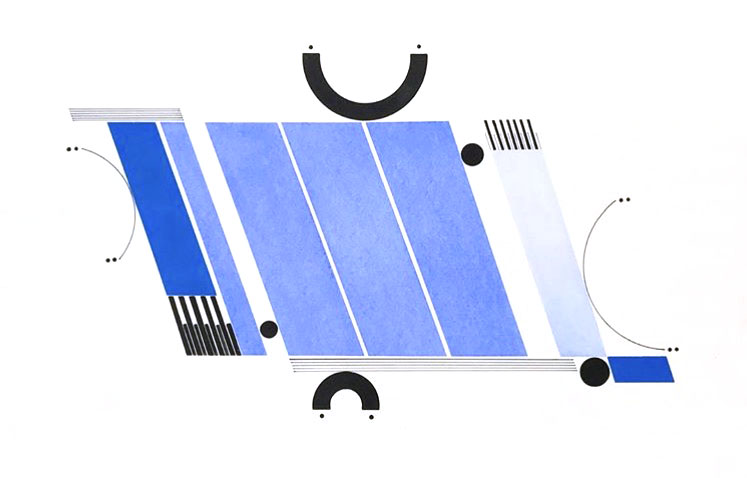