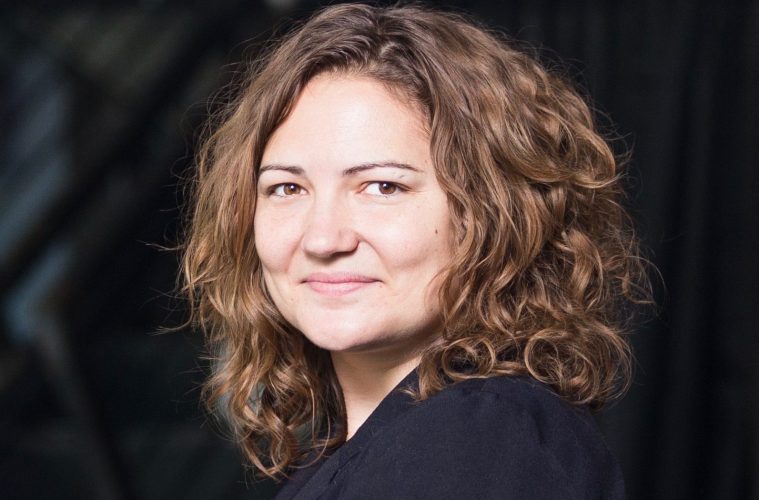 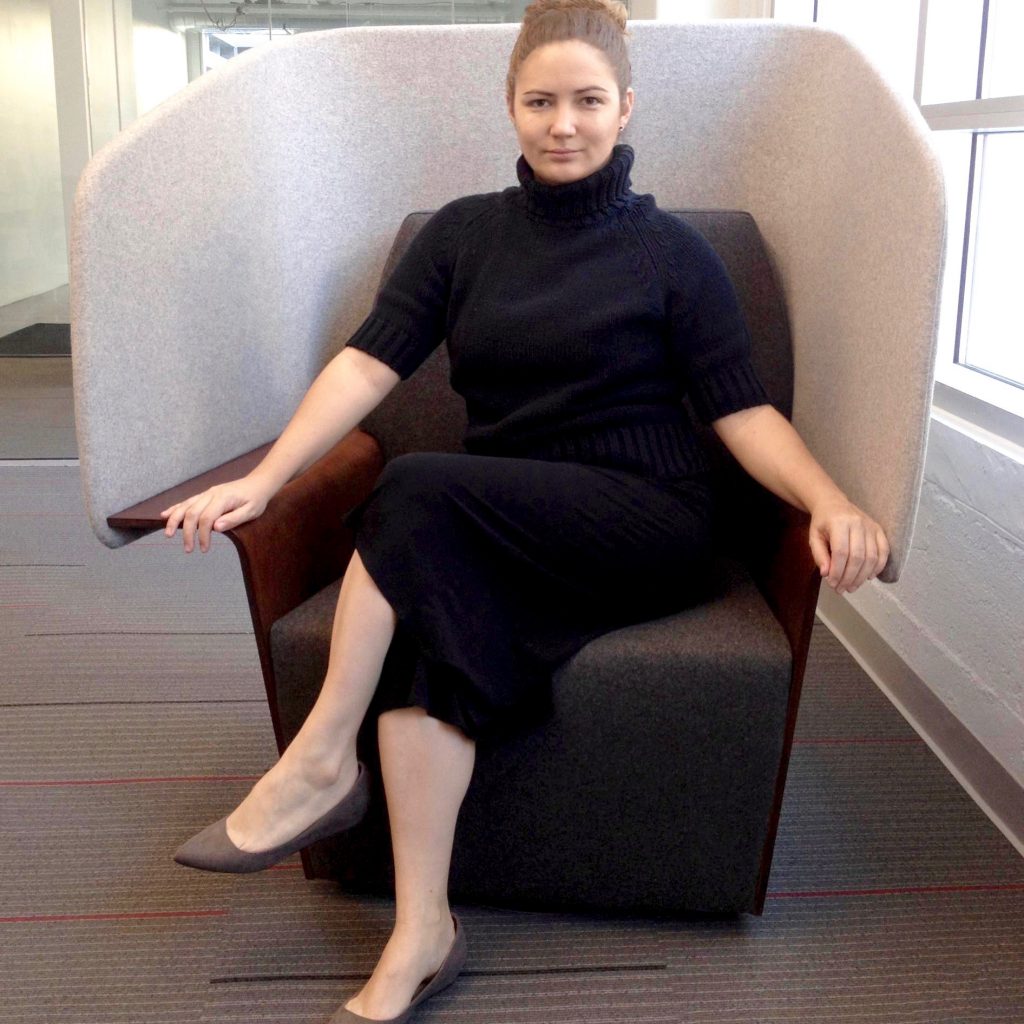 We are all creatives.

This is the essential promise instilled by Apple when you purchase any of their products, and in many ways this outlook represents the current state of art in the Western world. Within a post-modern lens, our antiquated, haloed notion of the creator becomes rather irrelevant. There is no artist with their back turned to the audience creating works that are somehow divorced from the context of where they are from or whom they have encountered.

The artist does not have power over interpretation, either. Rather, they are merely the holder of meaning, vessel of a contextualized understanding who yields to the interpretations of their audience. In that sense, the line between curator and artist has begun to blur. The democratization of art has dethroned the artist as someone sacred and different from a curator who acts as steward of art. In many ways, both artist and curator are stewards of meaning.

Phoenix’s Kara Roschi is what one would call an artist-curator. She got her start in the Phoenix scene by performing at poetry readings hosted by Ernesto Moncada and grew up working in photography, painting and writing. What began as finding spaces to read work turned into finding spaces for others to create work. What’s important is that she is in the business of developing artists and connecting them with spaces, which is an art of creation in itself. Her position as Chief Curator at Curator Engine allows her to do that. 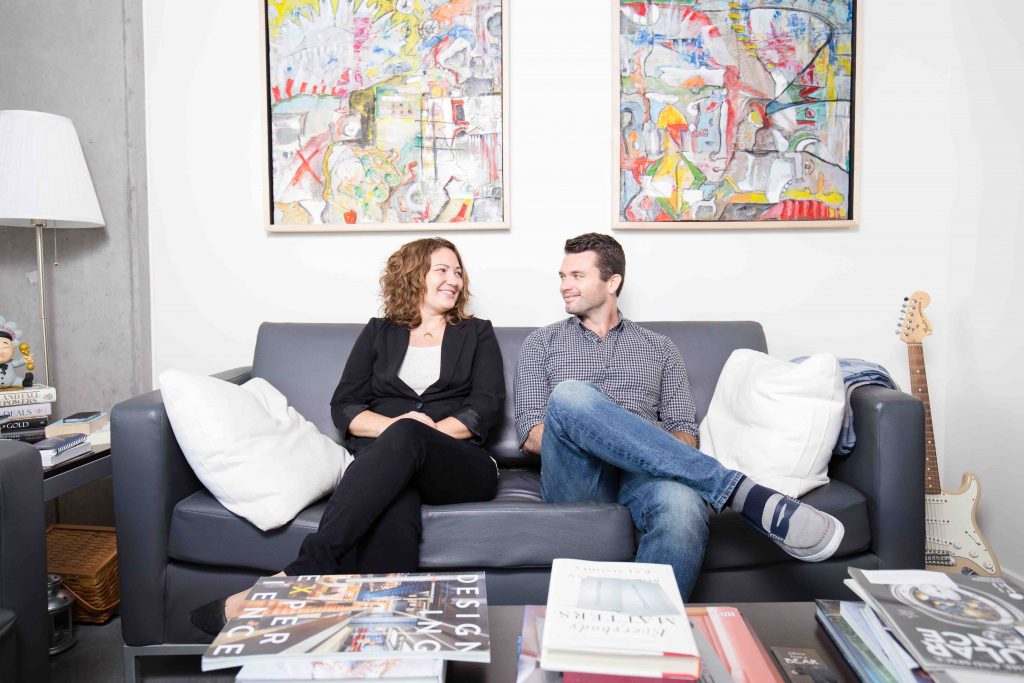 Roschi’s story starts as a kid in Girard, Pennsylvania. Girard is a tiny town. There are only two traffic lights, one into and out of town. A self-described “loner” who spent her time in books or on four- to six-hour bike rides, Roschi sought out herself—though she would never say it in those words. Her parents were high school sweethearts, but like a lot of people who fall in love in high school, they grew apart as the years went by.

Roschi’s parents couldn’t spend any time together, as her mother worked the second shift and her father worked the first shift. This, combined with the fact that they had become less compatible, made her nuclear family not quite so idyllic. Still, they charged ahead, like most families do in small Midwestern towns.

“My dad is pretty reserved and was in the blue collar field,” Roschi said. “He was very analytical. My mom liked to be out in the world and talking to people. She is funny in a goofy way, and my dad was funny in a dry, witty way. I thought they were complementing each other, but they were fundamentally different people,” said Roschi.

Most artists have pivotal, foundational texts that sort of disoriented them and altered their path forever. For Roschi, it was reading Stephen King in the fifth grade. Her first big King book was Needful Things, which deals with murder—not something a typical young Midwestern girl would gravitate toward. 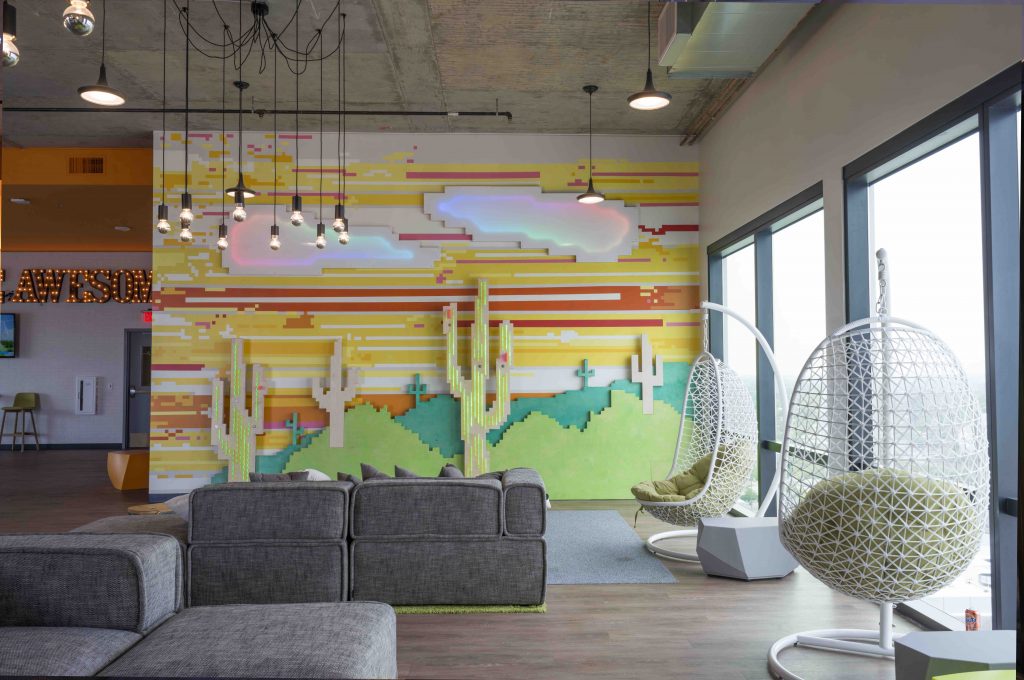 As Roschi puts it, “I have a love for learning about the softer stuff in the world, kind of like the nuanced things between the actual things.” In that sense, the schizoid world of Stephen King led her down a path of inquiry as an outsider who wanted to connect. Eventually she found comfort in Herman Hesse’s Siddhartha and Voltaire’s Candide, which led her to a set of ethics that would serve as her north star for years to come.

Roschi resisted her parents, which is natural. But resistance is futile. Roschi in many ways is an amalgamation of her parents. She’s someone who’s grounded in the winged wisdom of philosophy and can easily navigate among people with social gravitas. She is her parents’ portmanteau. But that didn’t happen without struggle. Rather, it happened because of struggle. The crucible birthed a diamond strewn with the residuals of her parent’s spiraled longings.

Roschi was in accelerated reading programs throughout school, and her parents—who didn’t go to college—urged her to attend university. Roschi was fine with that, but by her late teens she wanted to move out of the house. She didn’t want to feel obligated to anybody. She wanted to wander. However, her mom insisted that she stay until she was 18. Roschi obliged.

After turning 18, Roschi moved away from home and attended school in Pennsylvania, majoring in interdisciplinary arts. “I grew up always noodling in creative work—photography, writing, drawing, collaging—and wound up in college for an intermedia arts degree,” Roschi said. “I still couldn’t settle on a medium. Every field and format seemed just as suited as another to express ideas.” 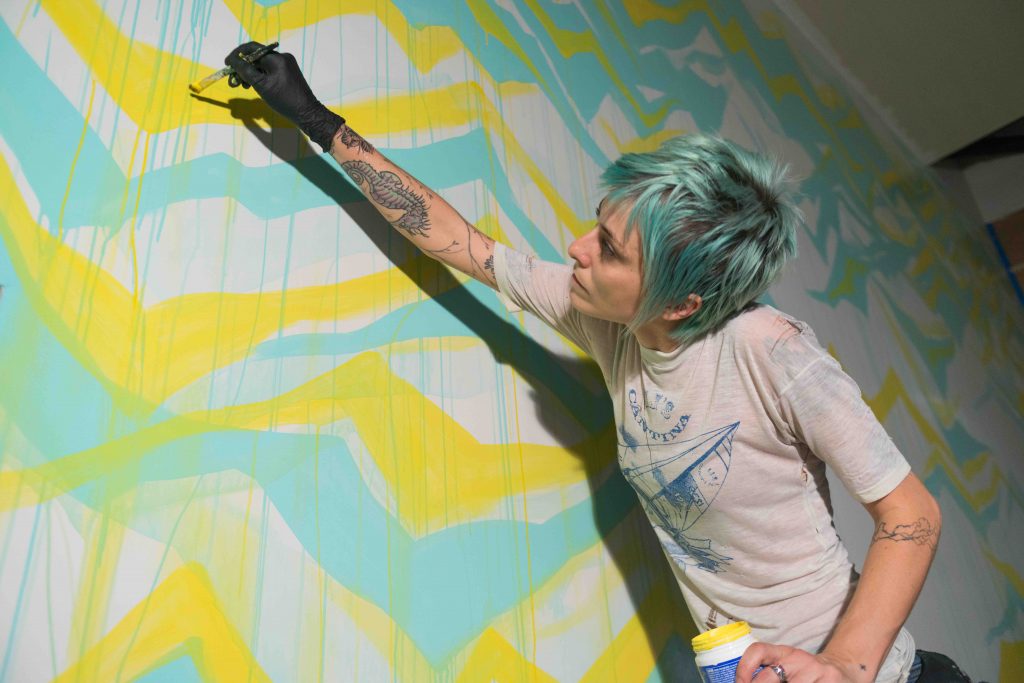 A year into college, she decided to move with her boyfriend out to Arizona. “We woke up one morning and he was like, ‘Do you actually want to do this or do you want to move somewhere else?’” said Roschi. “I didn’t even think there was an option. I was totally on board with moving, so we [got] the computer up into the bed and looked for a place where it never snows, had a comparable cost of living to PA, and had a school with an intermedia arts program, because that’s what I was enrolled in. And then Tempe, Arizona popped up.”

Roschi eventually graduated from Arizona State University in 2007. What helped shape her interest in curating and arts advocacy was a class in performance work with Angela Ellsworth and an introduction to Gregory Sale’s work—specifically how the work helped her explore ideas of intangible mediums. “I could work with time, with experience, with interactivity, with friends and strangers; I could play with the fabric and reweave or tug on the threads of social and civic interaction,” said Roschi.

“I wasn’t as compelled to create objects at that point; it seemed there was a more direct and immediate, visceral way to engage people. Being present for the actions and reactions of a work, those actions and reactions BEING the work… the relationships born from those moments…. That is all particularly attractive to me,” said Roschi.

Around 2008, Roschi came in contact with arts advocate Jane Reddin at Legend City Studios, who was looking to open up a retail store dedicated to selling local functional art. At the time, Roschi was working two jobs and performing at various venues. Eventually the conversation crystalized and Kara joined Reddin for the Practical Art launch. 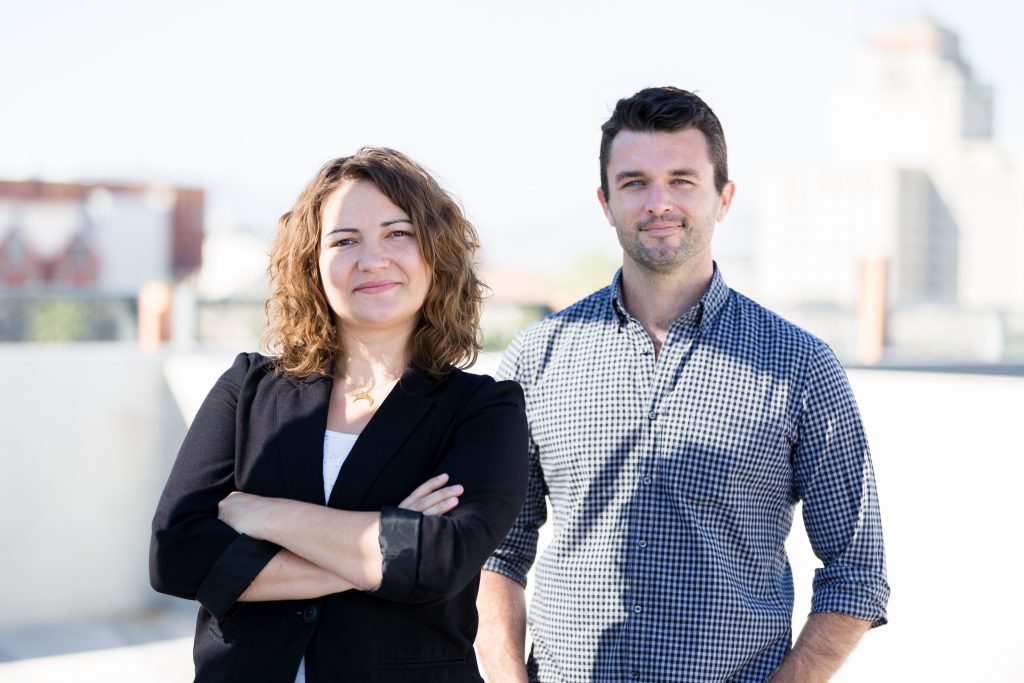 Roschi enjoyed working with the team at Practical Art, but after Reddin passed in 2011, she began to lose some agency and felt she would be better suited to furthering her education. A year or so prior starting graduate school, Roschi met and fell in love with fellow artist Chris Miller. They have enjoyed a strong, blossoming relationship as an artist couple.

Roschi decided to sign on as a research assistant, and this led to grow closer to the School of Art’s then-director Adriene Jenik. Through Jenik, Roschi helped start an arts placement service called Art Xchange, which would later lead to a more developed idea: Curator Engine. Jenik introduced Roschi to Tim McElligott, who decided to fund the Curator Engine project and serve as the founder.

“Curator Engine focuses on placing local artists’ work according to client needs—organizing the work in response to interest, theme, palette, demographics and budget,” said Roschi. “For our clients, we hub everything they could want into one simple transaction—high service from start to finish. For artists, we take care of the business side of their practice so they can keep their head in the generative creative space that yields the best, most inventive work.”

Having already completed around a dozen large projects, with another dozen actively in the works, things really starting to ramp up at Curator Engine. “Our very first big project was doing a suite of artwork for Marina Heights, which was one of the largest developments in Arizona history,” said Roschi. “We did a couple of the executive floors and also introduced a local art option for their public art component.” The Rise student living complex on Apache and Rural has been one of Curator Engine’s larger overall packages, with a collection of photography, five murals and a huge exterior wall installation. 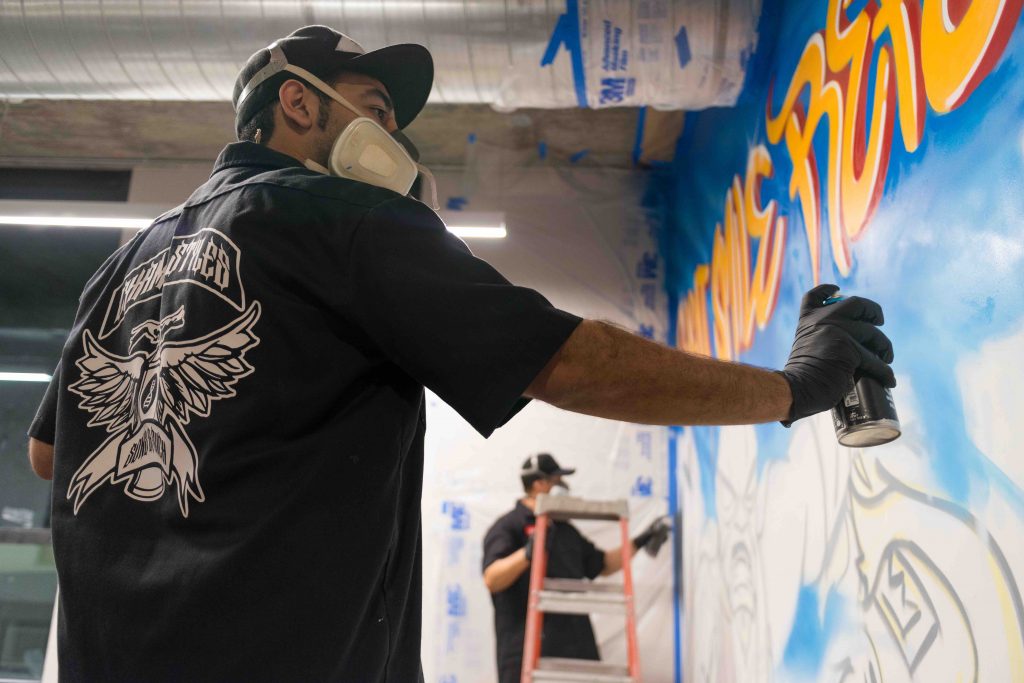 Roschi and McElligott come from different backgrounds, as Roschi has an arts education and McElligott went to school for business. Together they’re able to form a nucleus that reaches out to businesses and artists alike. “Tim is really good at connecting up with development companies,” said Roschi. “He likes those communities in the way that they can effect change in the world and he’s helping them connect with more millennial workers.”

The future is still tantalizing for Roschi. She has myriad skills and has promoted a lot of artists to develop and profit from their work in many ways throughout the Valley. She is drawn to connect, but naturally doesn’t stray far from home—even as a wanderer. At heart, Roschi is forever that child cruising through the neighborhood on her bike seeking adventures—seeking herself.