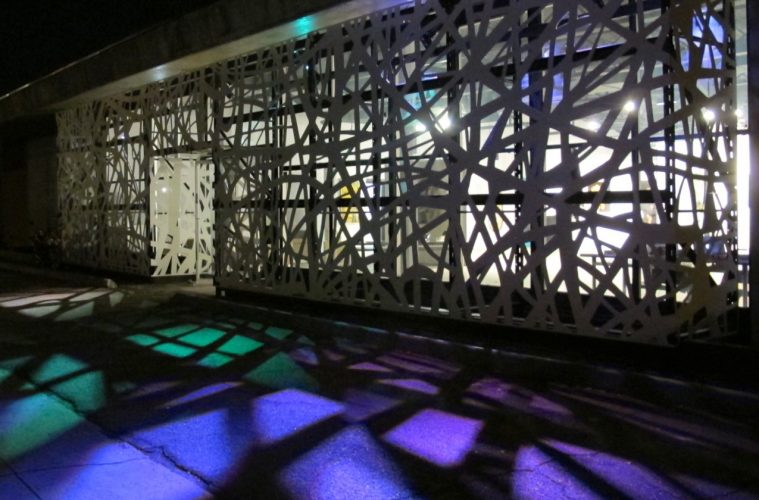 Auction-company entrepreneur John Lines and his wife, Sammy, founded the Unexpected Art Gallery in 2012. Since then, the gallery has hosted a range of art exhibitions: “The Veteran Vision Project,” by photographer Devin Mitchell, featuring images of veterans in and out of their uniforms to highlight PTSD; “(Ink)arcerated: Creativity within Confinement,” a show facilitated by ASU featuring works by current prisoners in Arizona; “Crystals and Lasers,” by Francisco Flores, featuring video and photographic works exploring the convergence of spirituality and technology—and that’s just to name a few.

The gallery also plays host to a wide range of events, including meetings of Women Grow, a group dedicated to supporting female cannabis entrepreneurs, on the first Thursday of each month; a graffiti mural live painting event every Tuesday; full moon parties and more. On May 3 of this year, they launched Ustudios, a creative cooperative and studio space housed in the western portion of the building and run by the gregarious and energetic Shane Smith.

For modern galleries in downtown Phoenix, it’s hard to sustain the ever-increasing rents, and this is particularly true for Unexpected, with its 10,000-plus square feet of space, A/C bills and other operating expenses. In addition to all the above-listed endeavors, the space is available for rent for private functions such as weddings or business and professional association meetings. For a modern art gallery and mixed-use space, it’s all part of the hustle.

The vast openness of Unexpected is matched by the openness that Cherish Coole, director of operations, and Chelsea Rusing, director of sales, try to foster. Both explained repeatedly that Unexpected is open and safe to people of all backgrounds. On a given visit you might find yourself brushing elbows with Phoenix Mayor Greg Stanton and a host of veterans, or partying late into the night with an eclectic ensemble of local characters. You’ll find none of the snootiness or elitism sometimes associated with traditional galleries. Instead, there is a friendly atmosphere where seemingly anything could happen.

Coole is a bit of juggler. She has to be: the gallery is in a near constant state of flux. One day it serves as a meeting space for Women Grow, which sees the gallery turned into a theater. This monthly event regularly draws crowds of 100, 200 or more. The next day the chairs disappear, replaced by a massive, modular screen and a maze of temporary walls that workers are frantically hanging with art for the next show. Despite this, Coole and Rusing try to take the time to make all comers feel welcome. 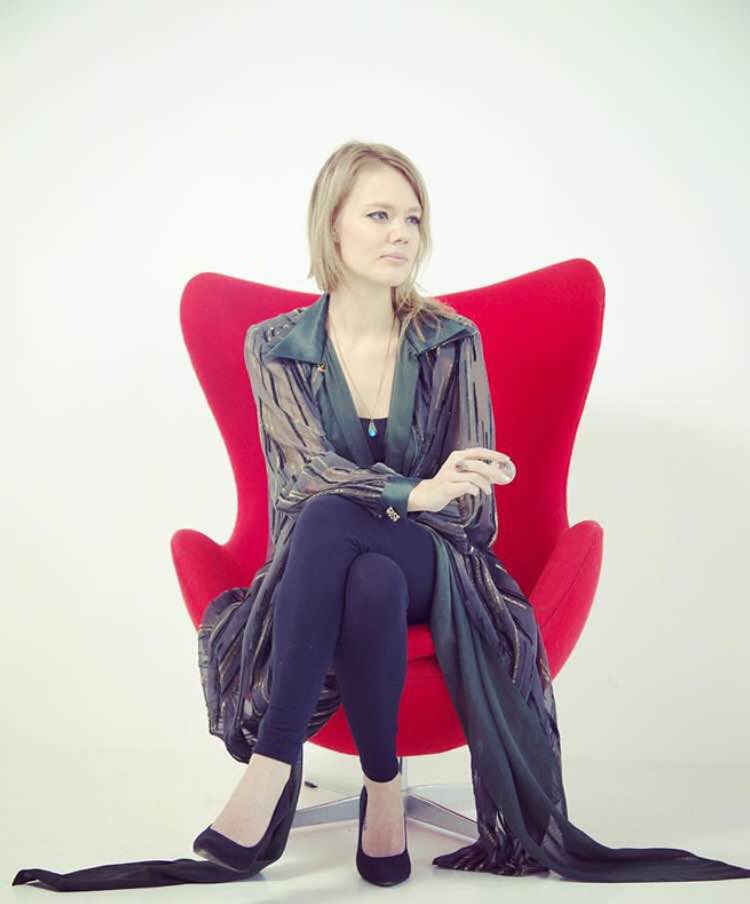 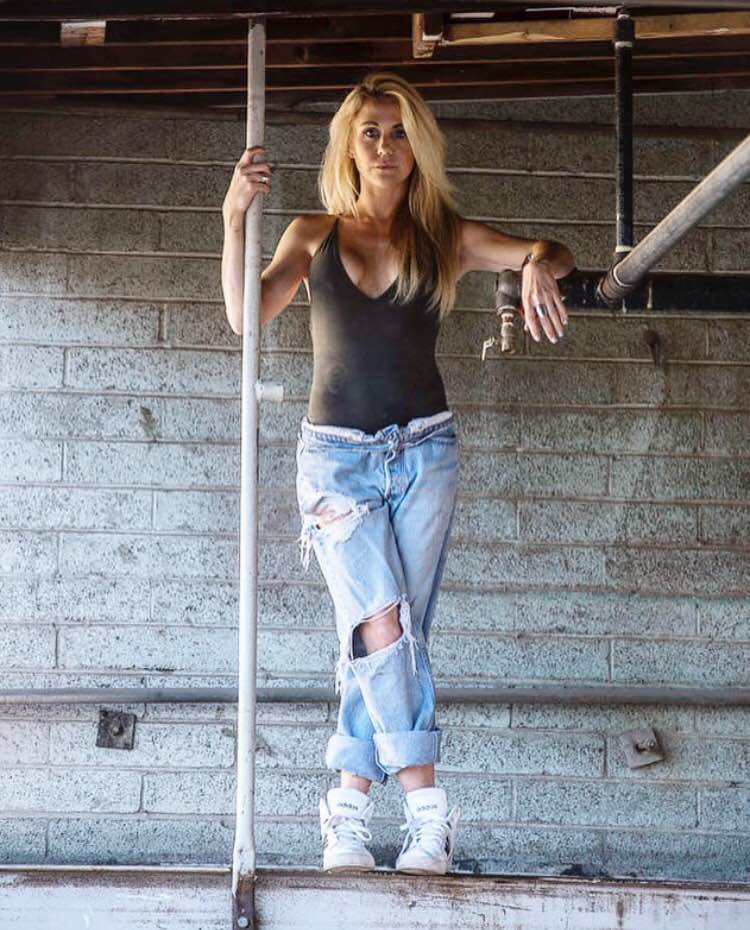 Running auction companies has naturally led Lines to accumulate a staggering array of, well, stuff. A helmet with what looks like ibex horns lies casually beside a pile of loosely bound scrolls, as if some sorcerer had just stepped out for a moment. There are hundreds of paintings, framed and unframed, sketches, statues, wood carvings and even a full-piece papier-mâché mariachi band. While one might be inclined to label much of it junk at first glance, it was from this pile that Unexpected Gallery may have unearthed a long-lost Salvador Dalí painting. If it is authenticated, the painting stands to complete Dalí’s “William Tell” series. One expert said if the painting is authenticated, it could fetch upwards of $10 or $15 million at auction, though the actual sale price could be even higher. More on this later.

As you might expect, Unexpected has a unique backstory. It was born out of one of Lines’ other ventures, Surplus Asset Management Auctions. SAM Auctions coordinates the sale of items from recently closed businesses, mainly through online auctions. From giant corporations like Fresh & Easy down to local mom-and-pop outfits, they work with a wide range of business types and sizes. While the closing of a business is usually a sad affair, Lines tries to get his clients the most for their assets. He tries to reuse and recycle materials that he can’t sell. In keeping with this philosophy, many of the elements within Unexpected are recycled, including its temporary walls on wheels that were salvaged. 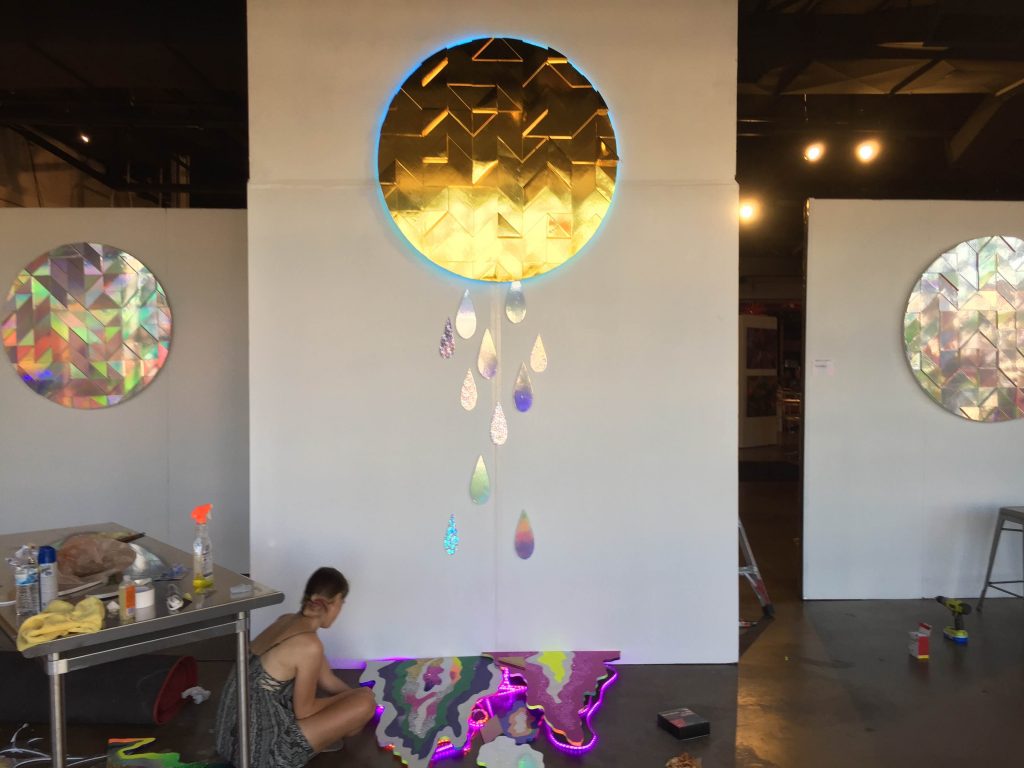 In 2012, Miller Store Fixtures closed and Lines acquired its 734 W. Polk St. location, which would become the site of Unexpected Gallery. The building is vast, perhaps one of the largest galleries in Phoenix in terms of raw square footage. Wedged on Polk Street between 7th Avenue and Grand Avenue, at that time the neighborhood was decidedly less advanced in the steady march from run down to gentrified. “It was a little bit of a scary neighborhood,” Lines said. Initially, the Lineses were unsure what to do with the huge building. Having amassed a considerable art collection, and as the result of long-standing personal interests, they decided to open a gallery. It was Sammy who came up with the gallery’s name. It seemed to perfectly encapsulate the nexus of the peculiar location and the assorted objects that made up the gallery’s initial collection.

Constructed in the 1930s, the building once housed a Chevrolet dealership. It was during this phase of the building’s history, sometime in the 1940s, that a mechanic was stabbed in the back by another mechanic while washing his hands in the locker room upstairs, Coole said. She explained that the story they heard was that the victim was stabbed for having an affair with the perpetrator’s wife. The locker room is still present and preserved upstairs in a room just off the speakeasy. 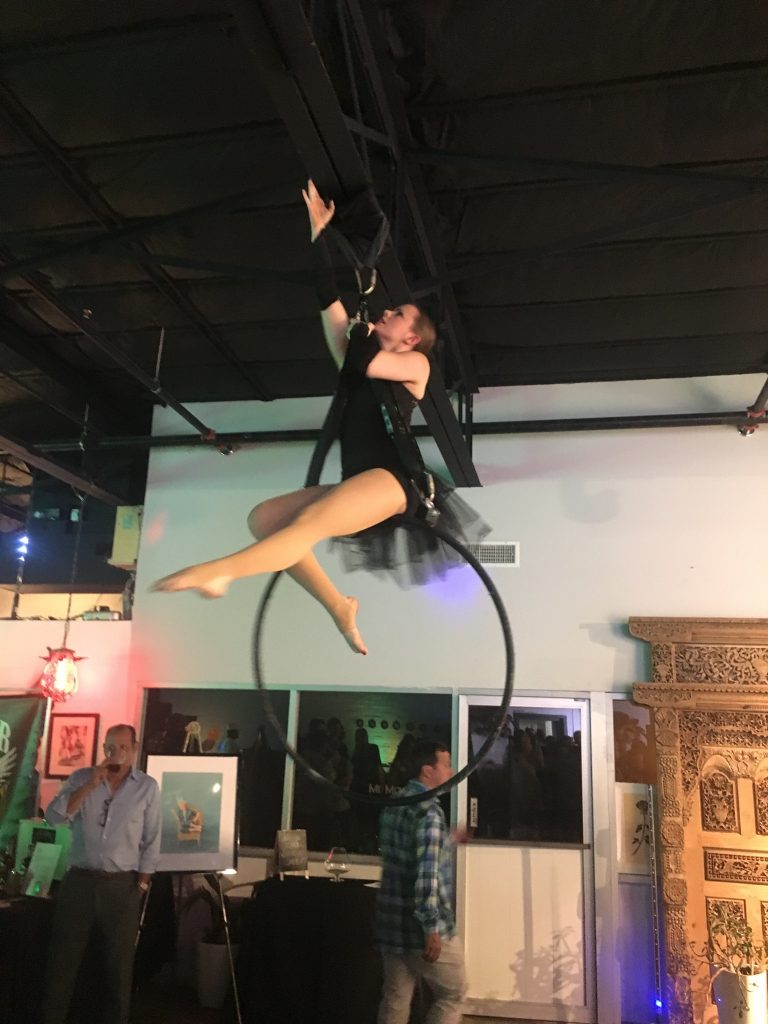 Did I mention the gallery has its own speakeasy? As I stood in the spot where the murder may have occurred, Coole told me they believe it may be haunted. They even brought in a psychic, who claimed to have sensed a presence there. Coole said that when working late at night, they sometimes hear footsteps and other unusual sounds emanating from the old locker room. While my neck hairs remained decidedly flat, the space is a little creepy. I attempted to find further details on the murder but was unable to confirm it. Coole assured me copious amounts of sage had been burned.

Another mystery of Unexpected is the status of a select number of the works included in the art collection of Roland E. Hill, which was initially brought to Unexpected by his grandson Steven Hill, a longtime friend of Lines. Roland E. Hill was an artist and architect whose most iconic work is the Disneyland Castle. Hill first fell in love with drawing castles while serving in France during World War I.

Initially a fighter pilot, after 13 sorties, Hill was shot down. According to Steven, Roland was significantly injured and was reassigned to driving officers due to his French-language skills. During this time, it is likely that Hill first met Walt Disney, who was then serving as a Red Cross ambulance driver in France. Disney had been too young to enlist in the military proper but was eager to serve. We can’t know if they were dreaming up magic castles and magnificent spectacles, but whatever Hill and Disney talked about would land them in a lifelong friendship and creative partnership. 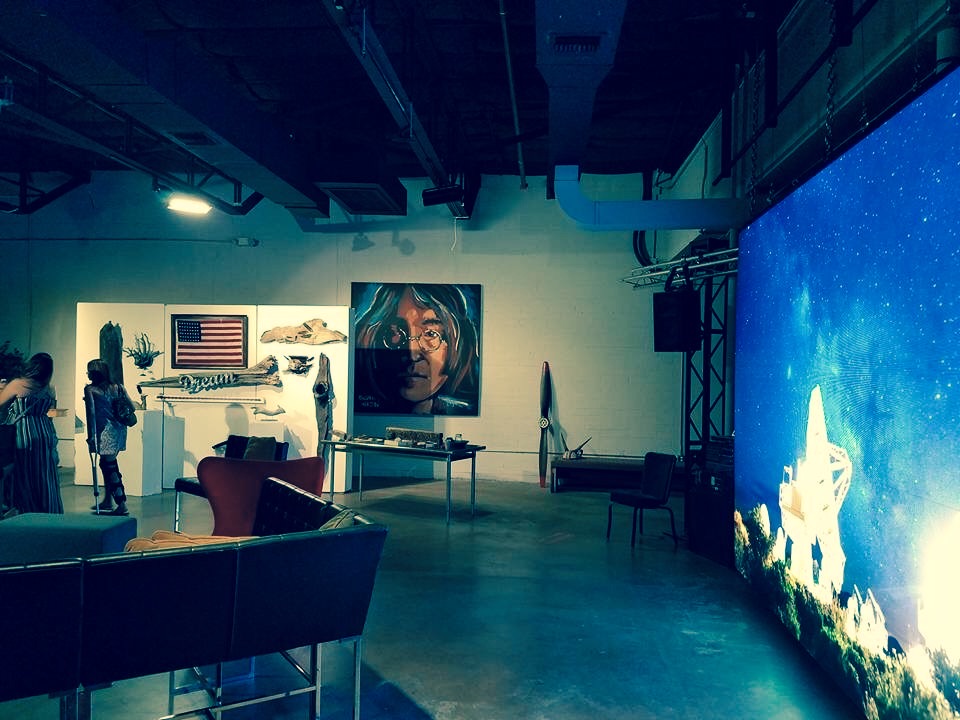 Hill stayed in France after the war, eventually enrolling at the École des Beaux-Arts, a prominent art school in Paris. While there, he walked the banks of the Seine amid the famous or soon-to-be-famous artists, writers and others who called Paris their home during that fateful time. They mingled in cafés and bars in neighborhoods like Montparnasse.

It was during this time that Hill first met Kiki Montparnasse. While we have no documentation of their first encounter, family legend holds that it may have been in a life drawing class, according to Steven. Wherever and whenever it was, Roland was smitten, judging by the vast collection of images of Kiki that he acquired and kept the rest of his life. These sketches, photographs and paintings done by various artists are part of the Roland E. Hill collection.

Born Alice Prin, Kiki Montparnasse was a master of self-invention who used her beauty and charm to become something like a 1920s Kardashian. Apparently born literally in the streets of Burgundy, she had a hard childhood, bouncing around and sometimes having to steal or work for food at a very young age. Flouting convention, she began posing nude for artists around the age of 14.

Kiki became the muse to a troop of creatives, inspiring greats from Man Ray to the filmmaker Fritz Lange. In Lange’s still popular science fiction masterpiece Metropolis, the female lead’s iconic style is believed to be modeled on Kiki. Two of Man Ray’s most famous works, “Le Violon d’Ingres” and “Noire et Blanche,” use her as both model and subject. Her memoirs feature introductions by Man Ray and Ernest Hemingway, who traipsed about Paris at the same time as Hill. 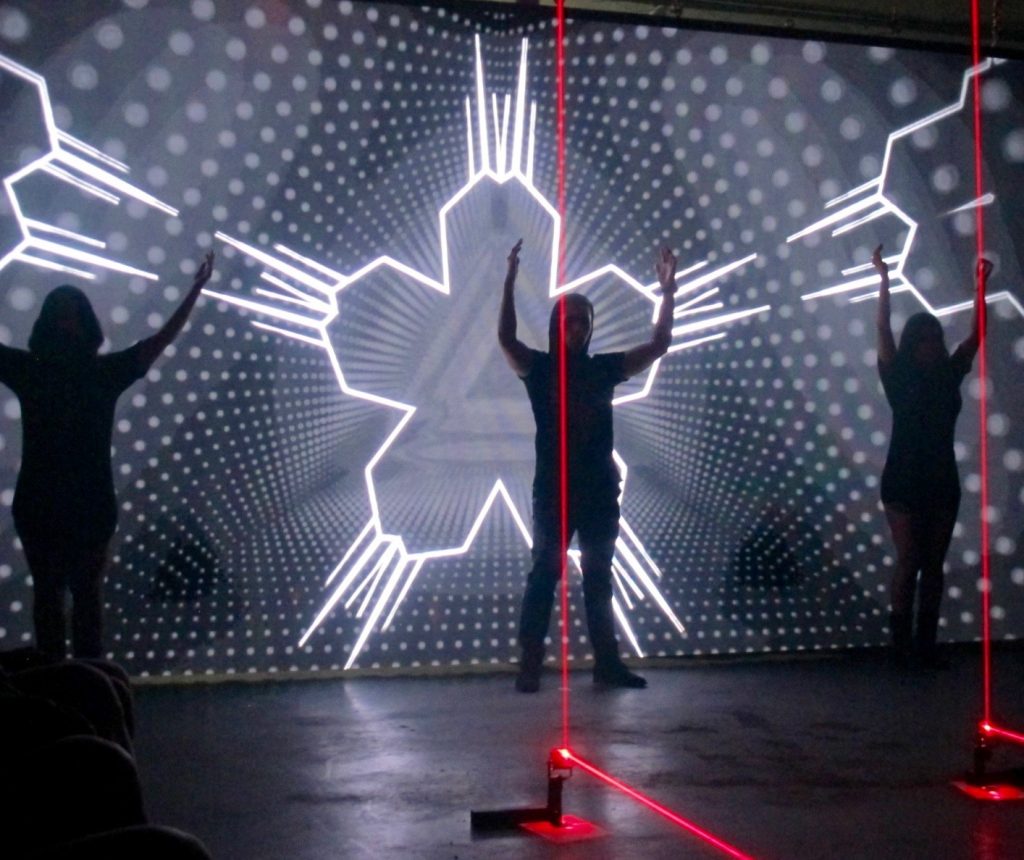 According to Steven, his grandfather and Kiki dated for a few months before she left him to begin her storied relationship with Man Ray. Heartbroken or not, Hill completed his studies before moving back to the United States in 1924. He started working formally with Disney in 1925. Whether it was during his initial stint in France or on one of his later excursions that he first met Salvador Dalí is unknown. What is known is that he knew Dalí and may have helped introduce Dalí and Disney, who collaborated on a long-unreleased short film, Destino, finally completed and released in 2003.

This information is important, as it could bolster Steven Hill’s claim that one of the paintings in his grandfather’s collection could be Dalí’s long-lost “The Youth of William Tell,” part of a famous series widely seen as a reflection on Dalí’s troubled relationship with his father. The series also marked the beginning of Dalí’s split with the Surrealists, who were angered over a depiction of Lenin’s face in one of his paintings and went so far as to (unsuccessfully) attack the painting when it was shown in the Salon des Indépendants in Paris in 1934. Painted in 1932, “The Youth of William Tell” disappeared from the history books shortly thereafter.

Could this be the painting in the Roland E. Hill collection that was recently exhibited at Unexpected? There is some evidence to suggest that it is. Emilee Simpson is currently researching the painting for Unexpected and will reveal her findings at an event scheduled at Unexpected on Friday, Sept. 15 at 7:00 p.m. If the painting is shown to be authentic, could this mean that works in the collection appearing to be by van Gogh, Monet and Matisse may be authentic, as well? This is all beyond the knowledge and expertise of this reporter, but if the answer is yes, not only would it be one of the most extraordinary artistic finds of the century, it would be quite unexpected as well. 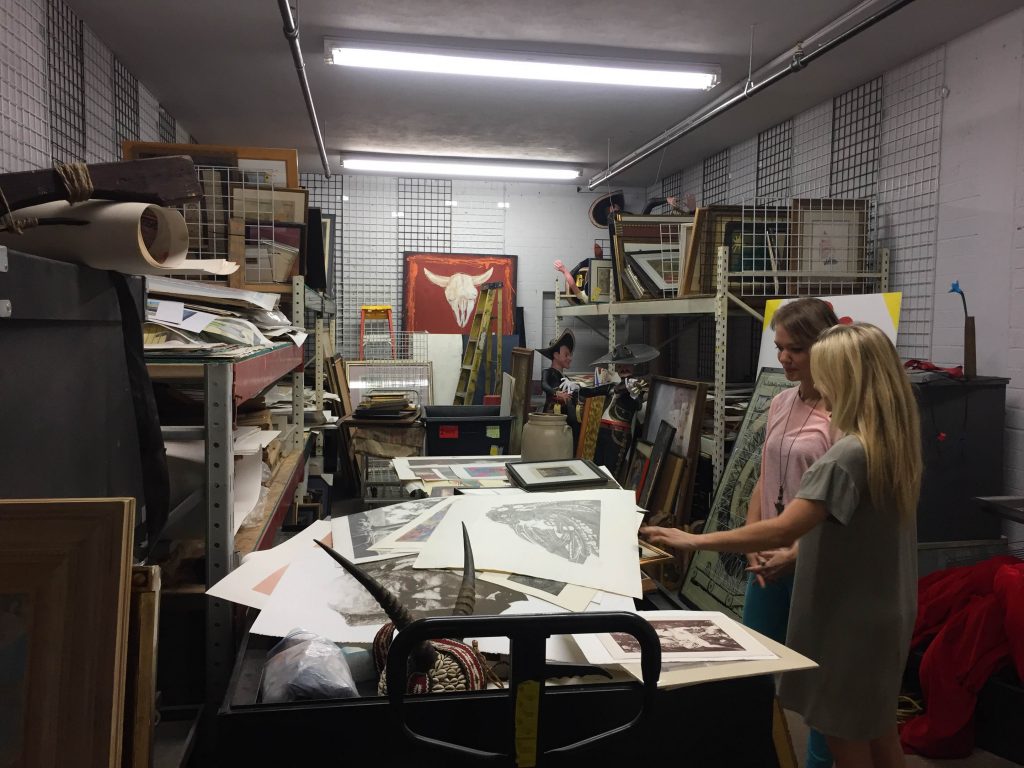 If you’re looking for something fun and thought-provoking, whether it’s a full moon party, live body painting or the potential reveal of a long-lost work by one of the 20th century’s most groundbreaking artists, then you should make a journey to the Unexpected Art Gallery. 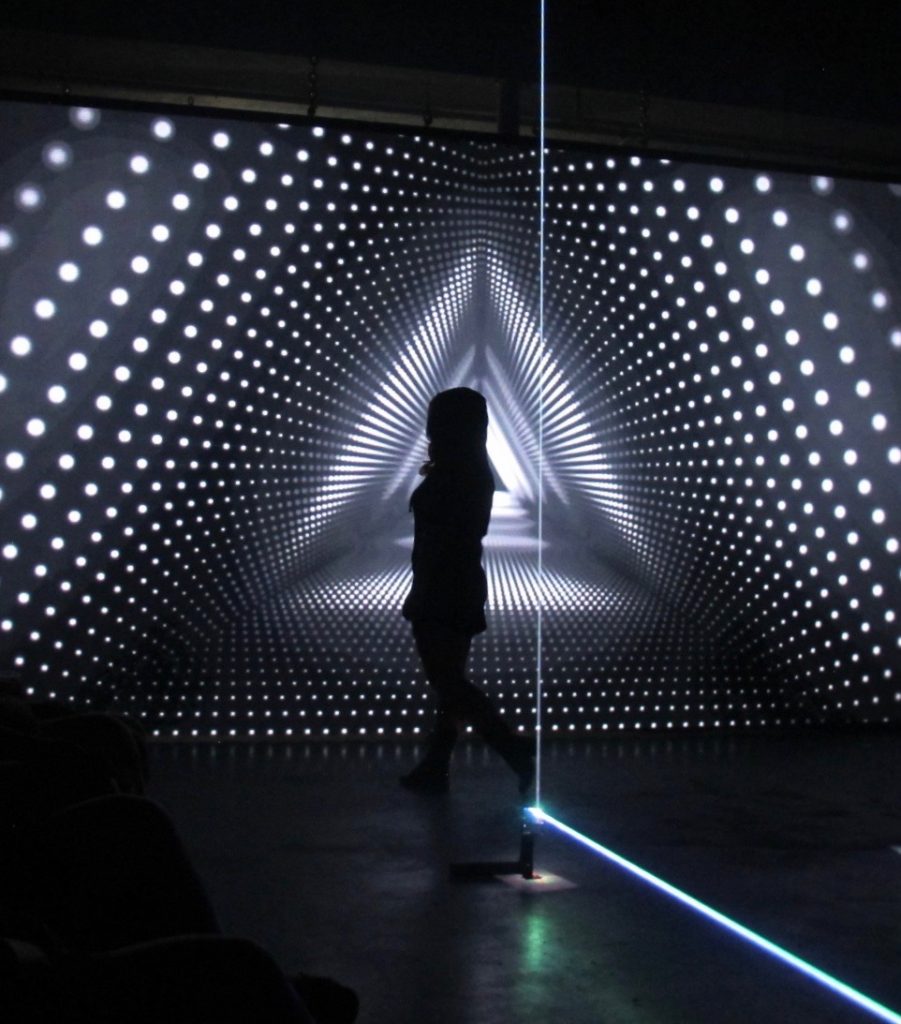