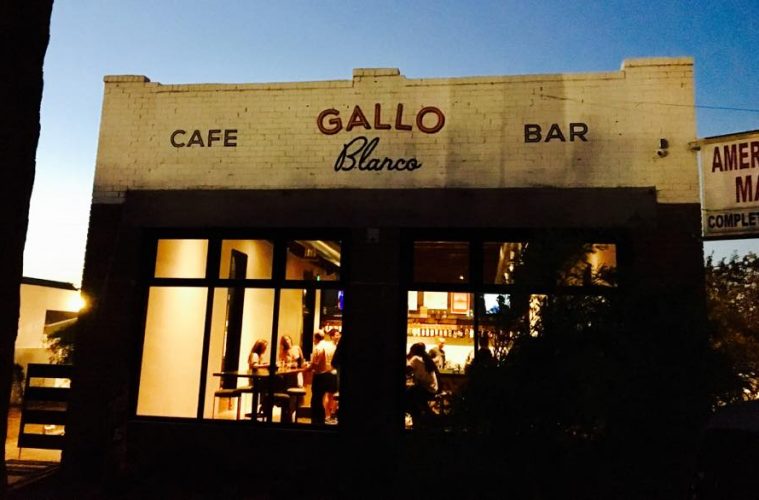 Gallo Blanco: Reincarnation of the Rooster 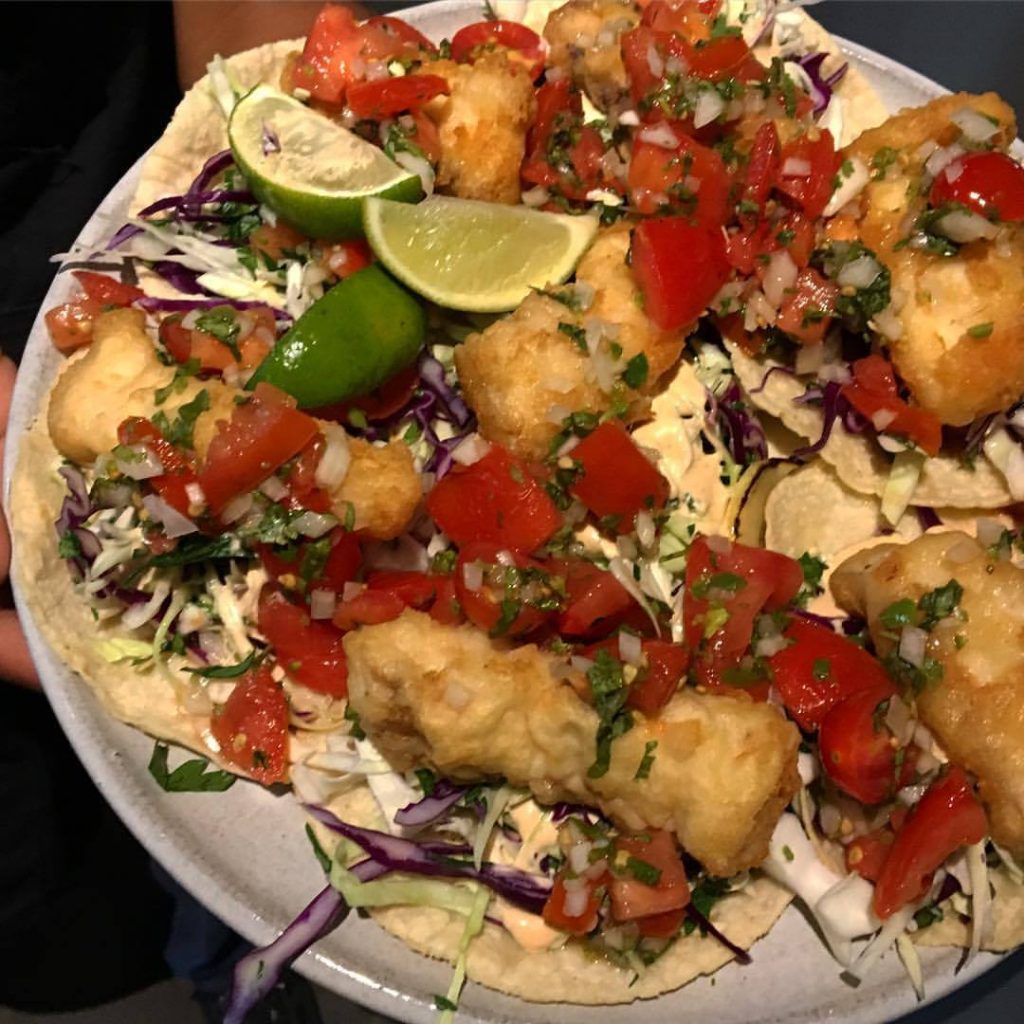 Very few restaurants get a do-over. Usually, when a spot closes, that is the literal end, memories and flavors be damned to the trash heap of history. Maybe because we are Phoenix, like a phoenix, a place can climb out of the ashes and start again. But will it be any good?

I thought a lot about that when Gallo Blanco closed. I dig Otro Cafe, Chef Doug Robson’s other spot (ha ha), but it wasn’t Gallo. I know that is kind of the point—separate spots, separate vibes—but there was always something hopeful about such a successful place finding a way to reimagine itself. I’m quite certain that I wasn’t the only person in town who kicked off a countdown clock when the announcement came that Gallo was opening again, and I’m pretty sure I was not alone in crossing my fingers and praying to the taco gods that it would be good again.

After its fateful opening in July, I can confirm: it is as good, if not better than the original. Of course, I’ve had to go back numerous times to collect more data points (read: tacos), so I feel confident in asserting that happy asada days are here again. 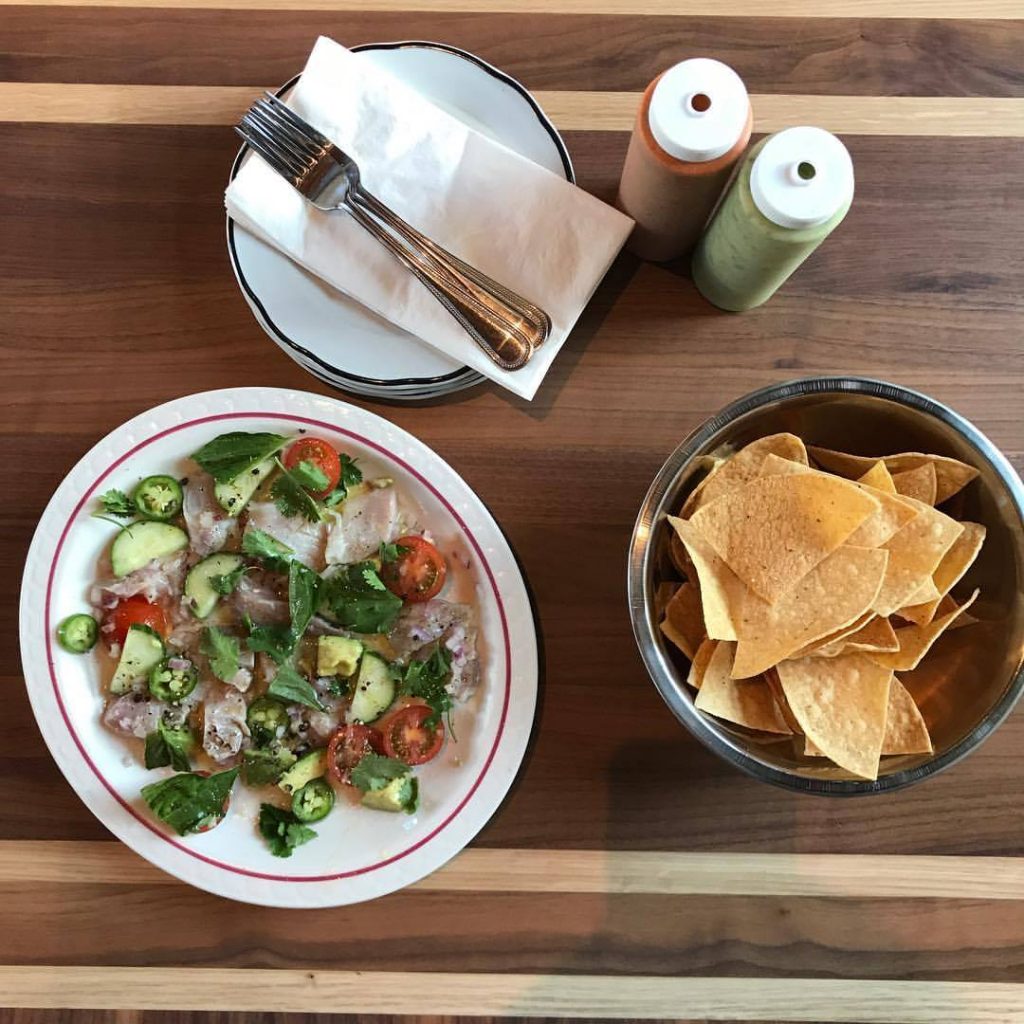 It took about a year to rehab its new home, an almost 100-year-old brick building in downtown’s Garfield neighborhood, the kind that are disappearing faster than you can say ensalada cortada. And that amount of time was clearly spent doing the Lord’s culinary work. The new Gallo Blanco is shiny, modern and welcoming. The front of the space is the bar area, with full service. I must confess that I prefer the back section, the fast casual model, with a counter for ordering. Busy times include a creative solution, where the hostess checks you in and drops your number on a table while you proceed to order, so there is no circling like a shark hoping a spot will open soon.

The menu is more streamlined and sophisticated, while never losing what made Gallo Blanco so tasty the first time, with a few new kicked-up additions. Fans of tacos will appreciate that they have now been stripped down to their core—grilled meat, a smattering of onions and herbs, perched on freshly made tortillas. 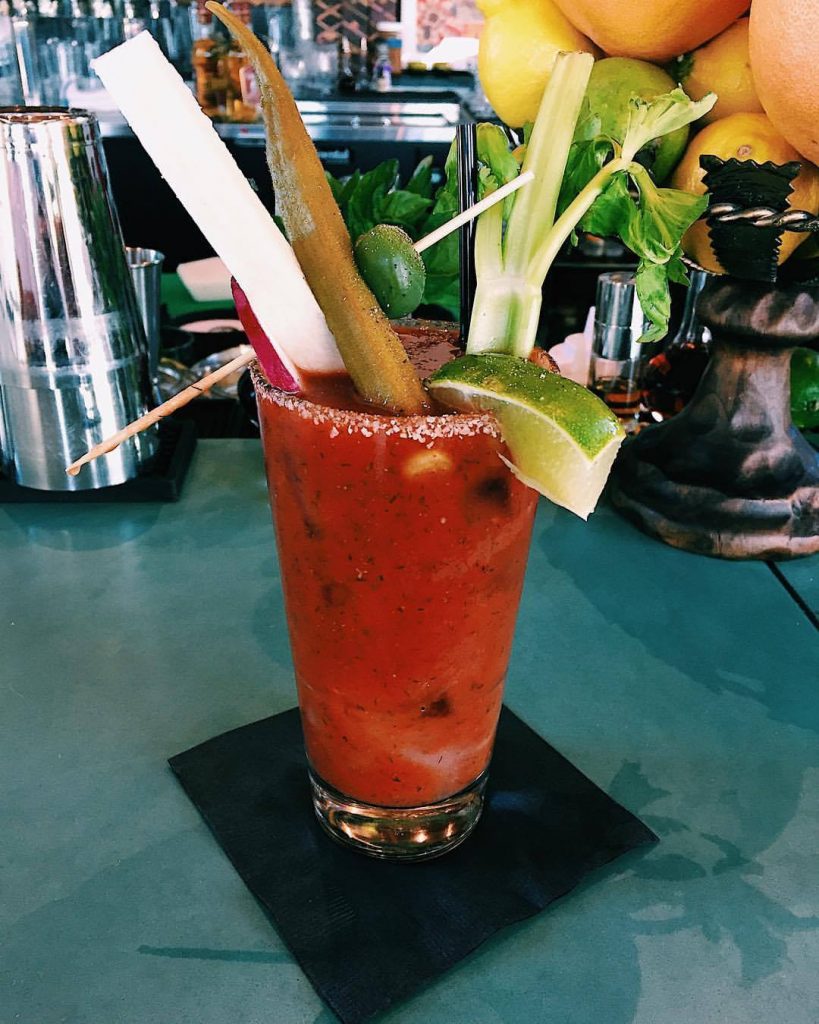 Of course, the Carne Asada (all tacos are $3.25) is not to be missed. A slightly smoky, flavorful explosion that is even better than its previous version. You’ll love the Al Pastor, a kicky pork creation, and their Vegetable version is no mere afterthought. You’ll also want to try the Campechano, a carnivorous blend of al pastor, carne asada and longaniza that is inventive and tasty, an homage to protein.

Taco fans rejoice, because you can now order tacos family style, dubbed La Parillada ($15). A sizzling cast iron skillet arrives with enough filling for at least six very generous tacos, with tortillas on the side. I love the addition of a grilled long green onion, and you’ll even get a choice of two kinds of filling. I love the Campechano and Vegetable combo; it feels almost virtuous. Veggies change seasonally, and today it was a savory mix of squash, onions and earthy mushrooms.

Don’t skip the Torta, a resplendent mix of the aforementioned options (carne asada, al pastor or veggie $9, or campechano $10), served on a warm grilled bolillo roll. If you’ve been missing their Naco Torta ($10), you’ll find it again, and it is every bit as ooey gooey as it once was, thanks to the expertly fried eggs placed on top of grilled ribeye and fresh guacamole.

Fans of their housemade sauces can rejoice—they are back. Consider upgrading to the La Charola ($9), a tray of perfectly thick, salty, warm chips served alongside three more housemade salsas and an impressive guac, loaded with hunks of orange and grapefruit. 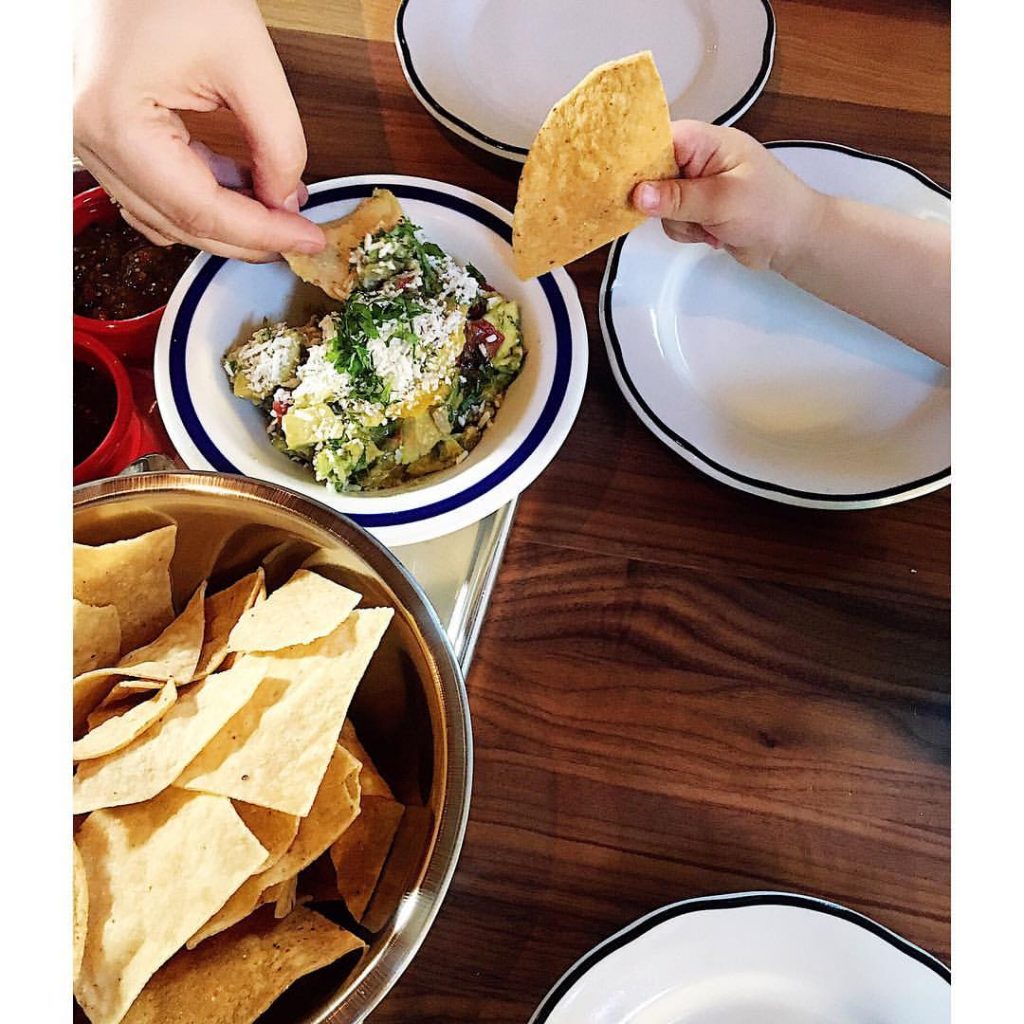 I’d forgotten how much I loved the Chicharon de Queso ($7), a slab of perfectly grilled cheese, crisped to perfection until it mimics a tortilla chip, and its luscious yellow spice that packs a surprising hit of heat. Personally, I think strips of this crispy cheese treat are the perfect delivery mechanism for the aforementioned guac, but it’s fantastic on its own. This dish defies the laws of physics, since there is no spreading oil slick anywhere, which happens every time I attempt this at home.

Salads are no mere afterthought here, as well. I’m still in love with the Cortada Dos ($10), quite possibly the crunchiest salad on earth, filled with ribbons of kale, crunchy peas, hunks of grilled cheese, egg and giant local corn nuts. Spend the extra $4 to gild the lily with some of the killer carne asada. This time there are no size options (as opposed to the small or large before). Sized slightly larger than previously, this iteration comes served in a gorgeous ceramic bowl that almost seems handmade.

Gorgeously grilled seasonal veggies ($5, the same as in the tacos) also come in a largish bowl, and are nearly a meal in themselves. I confess to using chunks of the crispy cheese to scoop up the veggies, which seemed to vary from visit to visit. One of the perks of truly seasonal cooking is that particular fact—the dish evolves through the year. I’m especially looking forward to eating veggies and herbs that will one day be grown on site. 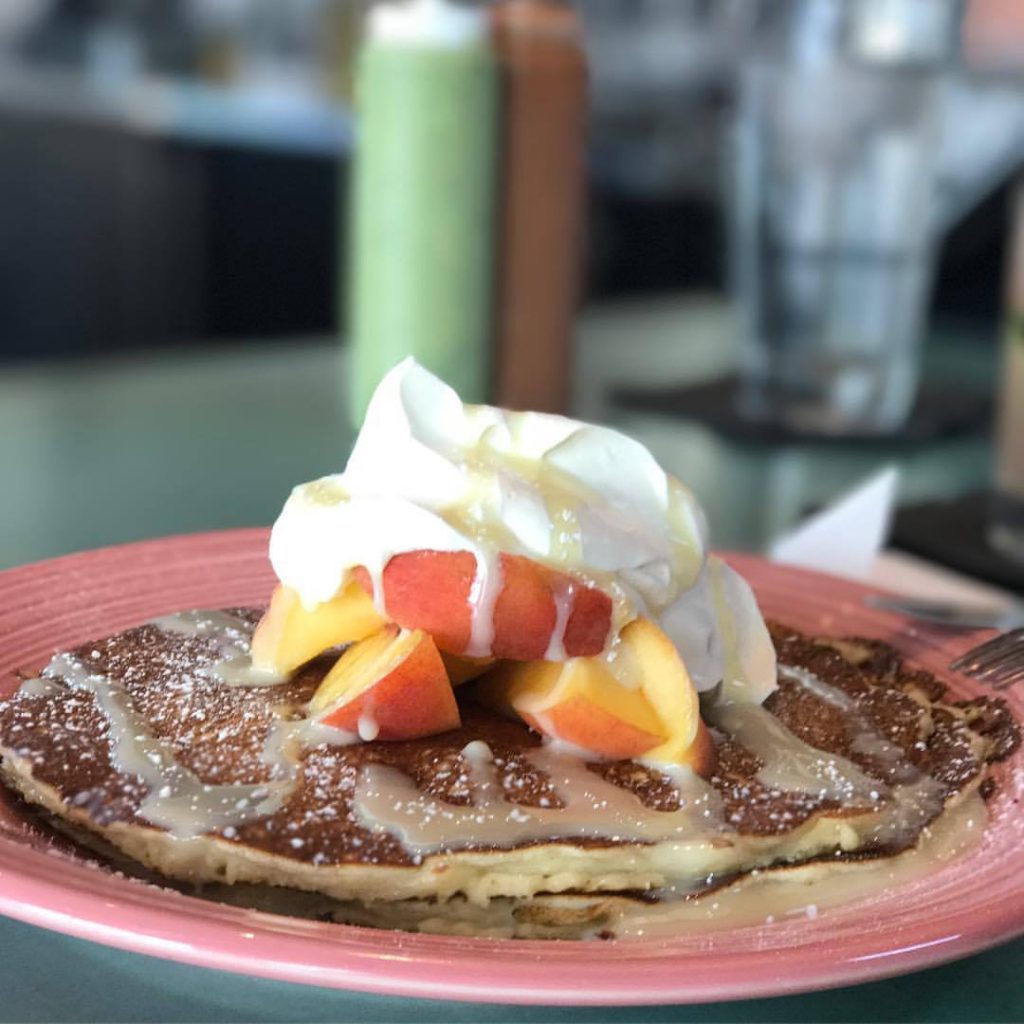 Perhaps my favorite new addition is the Enveluto ($12), which is almost like an al pastor burrito, except the tortilla has been replaced with another form of grilled cheese. I sense a theme here, a delicious theme. You’ll find tiny bits of grilled pineapple folded inside, with another slice perched atop. It’s no mere garnish—this pineapple amplifies the flavors and contrasts with the slightly kicky heat.

An impressive cocktail program is in effect, with handcrafted drinks ($10) and an impressive list of mezcals, served in a generous two-ounce pour. Like all things at Gallo, expect selections to rotate with the seasons. Their house margarita is an affordable option ($6) and during happy hour, cocktails are a dollar off.

I shouldn’t have been worried about this version of Gallo Blanco. Doug Robson is a great chef with a fantastic team and an impressive attention to detail. It’s clear the entire project is a labor of love. It looks great, feels like it’s always been there, and Robson managed to keep the existing signage of the building, a cool nod to its previous life. He has built upon Gallo Blanco’s foundation, and it is already special. I can’t wait to eat what happens next. 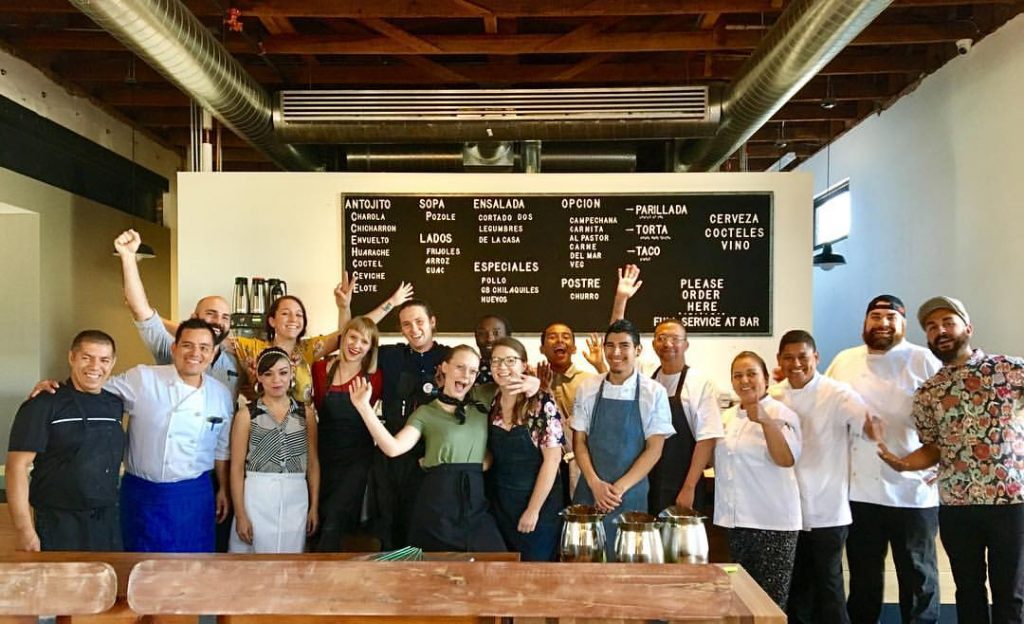