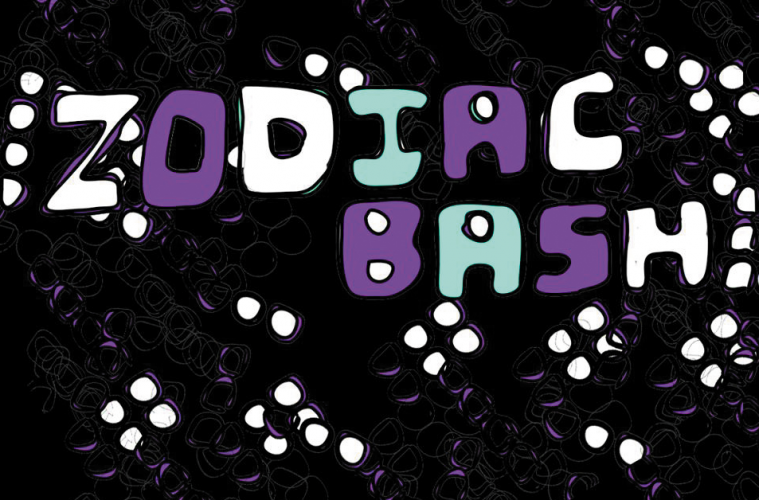 Mitchell HillmanMarch 19, 2016
Music0 Comments
0
0
0
0
0
0
0
Over the last year and a half Zodiac Bash have been playing some of the most vital live shows in town. They are something of an indie super group, featuring Patro Gaston (Paper Foxes), Ari Leopold (Rolling Blackouts), Ben Foos (Fairy Bones) and Ben Fuqua (Bacchus and the Demonsluts). Whereas Gaston has been a sideman in other musical projects, here he is the visionary and leader of the group.

Their debut EP might appear to be an album with ten tracks in tow, but starting with “ATTENTION,” every other song is a short, psychedelic link track that sounds imported from outer space. With a name like Zodiac Bash, this all makes sense. These link tracks are essential to the construction of this EP, as they connect the five actual songs. Two of their earliest songs, “Vocosis” and “Bouncy,” are here, and they sound better than ever, fully fleshed from the demos from which they were born. The latter is a clear choice for a single.

The EP does come off as a sort of greatest hits package of favorites from their live shows, with “Break Party” kicking things off. Then there is the amazing keyboard part in “The Crane Zodiac” that kills me every time. It’s my favorite track for sheer composition alone. The EP concludes with the epic-length, apocalyptic “Tectonic Dreams,” which is harrowing in its darkness. There is almost no better moment on the record than when this song spins out of control into the finale. This is a pretty impressive debut that puts Zodiac Bash’s weirdness right up front and delivers their signature sound perfectly