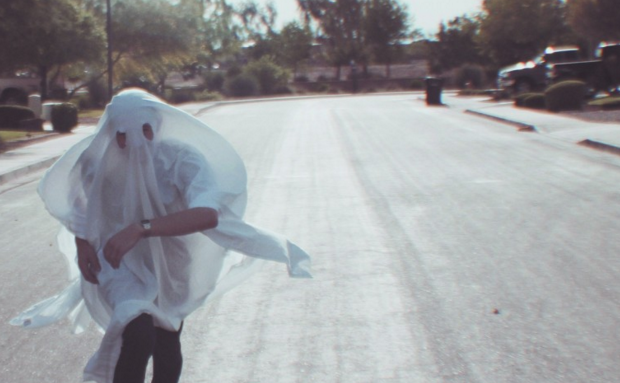 If you’ve ever wondered what The Smiths would sound like if they were a surf band, I may have found the answer for you. Phantom Party is one of my new favorites, and the lead singer sounds like Morrissey, backed by the Ventures. It’s a pretty great contrast, and I’ve had their Stellar EP on heavy rotation for the last couple of months. Together, Joshua Capati (lead vox/guitar), Nathaniel Levine (guitar), Matthew Slusser (bass) and Austin Cooper (drums) are Phantom Party, a band that has come up with quite an original twist on some familiar sounds. It’s an interesting mix that features dour lyrics concerned with religion, death, aging and the future, with music that is as upbeat and head-bopping as possible.

These are pop songs in no uncertain terms, just with darker concerns.

The EP opens with “Catholic School,” which is marked with stunning surf guitar, fantastic harmonies and Capati doing his absolute spot-on Morrissey voice. The title track, “Stellar,” is a dreamy, summery number with reverb guitars, a beautiful bass line and some fantastic cymbal-crashing drums. Capati’s vocals echo seamlessly across the entire song, and it will have your hips swaying by the end. With chiming fast-paced guitars and brilliant bass, “Sunflower Eyes” serves as a slightly less surf-laden showcase for the lyrics, and it may be a song that is more in line with Morrissey’s solo work when it mattered.

“Skin” is the only song where the music is nearly as dark as the lyrical content. It creates a Tarantino feel, which is pretty great, and it is also the longest song found here. Wrapping things up is “Twenty,” an ode to that age, to that time in life filled with uncertainty and contemplation of therapy. It’s a great way to end the EP. Not a single song touches the three-minute mark, and it’s pretty awesome how much thought can fit into such compact packages. Let’s hope Phantom Party have an entire album for next year.