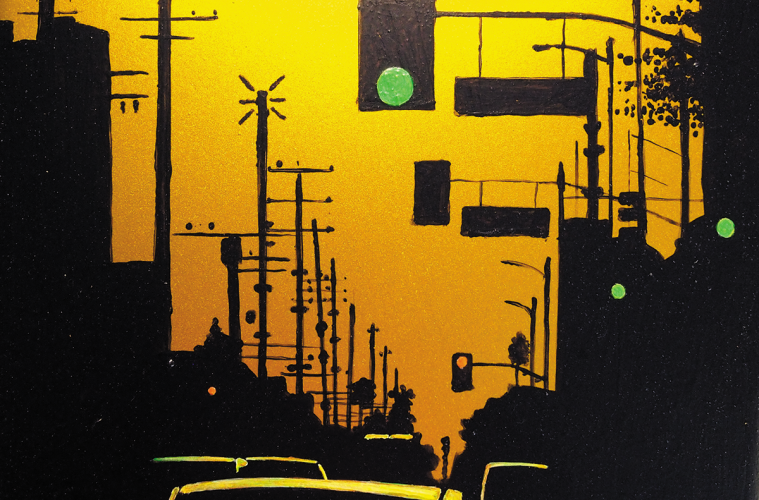 Colton Brock certainly isn’t the first artist to create work that is inspired by travel, but when his solo show “Location3” opens at The Hive on October 16, you will be clearly aware of his passion for the exploration of different cultural and physical landscapes. The show, which features mostly paintings, along with a couple of photographs, offers a look at some of Brock’s destinations of the last year and a half, including parts of Arizona outside of the Phoenix metro area, as well as California and Mexico.

One of the most striking pieces in this exhibit recollects Brock’s visit to a cemetery in Guadalajara, a trip that fell on the Dia de los Muertos holiday. Though he was excited to witness the traditional celebratory festivities to honor the dead, his painting is a showcase of the cemetery itself, without the people. This unoccupied version highlights the cemetery’s simultaneous existence as both a magnetic structure and a spot to find solace and serenity. There’s a softness to the piece, in both the palette and the presentation. Touches of yellow flowers and soft pink portions of a chaotic, grey sky add both authenticity and mood.

Brock uses color as a way to connect with the viewer.

“About 10 years ago,” he recalls, “I got really interested in color schemes. The color schemes that end up in my work are more based on what my mood was during the experience and trying to portray that mood.”

Where the motion in that piece was captivating in its flow, some of Brock’s nighttime streetscapes are equally attention demanding in their stillness. Sometimes, he utilizes a few colors to juxtapose buildings and sky. His fine lines and razor-sharp edges allow you to feel the tenacity of a city’s structure, but the background hues give a continuous hint of nature’s warmth.

One reason Brock was in Mexico was to study tequila, along with other members of the U.S. Bartenders Guild. As a knowledgeable bar manager at chef Silvana Salcido Esparza’s Barrio Urbano, he is always looking to continue his alcohol education, especially when it comes to agave-based spirits. He also works at Esparza’s renowned Barrio Café location a couple of days a week and has a great affinity for Esparza and her commitment to the arts.

Brock likens his experience creating beverages behind the bar to painting.

“I enjoy working with flavors,” he says. “It’s like mixing colors, in a lot of ways—there are factors of composition and aesthetics.”

He also does a pop-up mini-bar at downtown’s Jobot, citing the popular hangout’s owner, John Sagasta, as another member of the community he is glad to have an opportunity to work with. 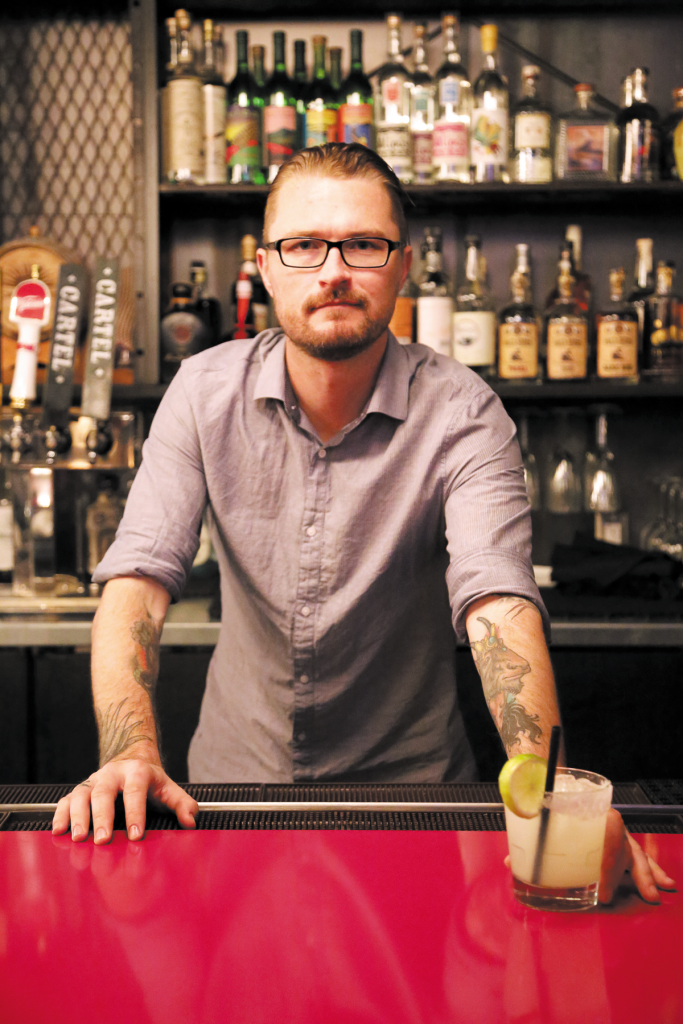 Though he loves venturing to different locations, Brock has a true love for the desert. Both of his grandfathers were born here, and he is happy to call it home, expressing how his long hikes and admiration of the Sonoran desert often influence his work.

“I love Arizona’s rich, romantic history, its folklore and its proximity to Mexico,” he says. “I also love the way it smells. Nothing else smells quite like creosote when it’s raining.” 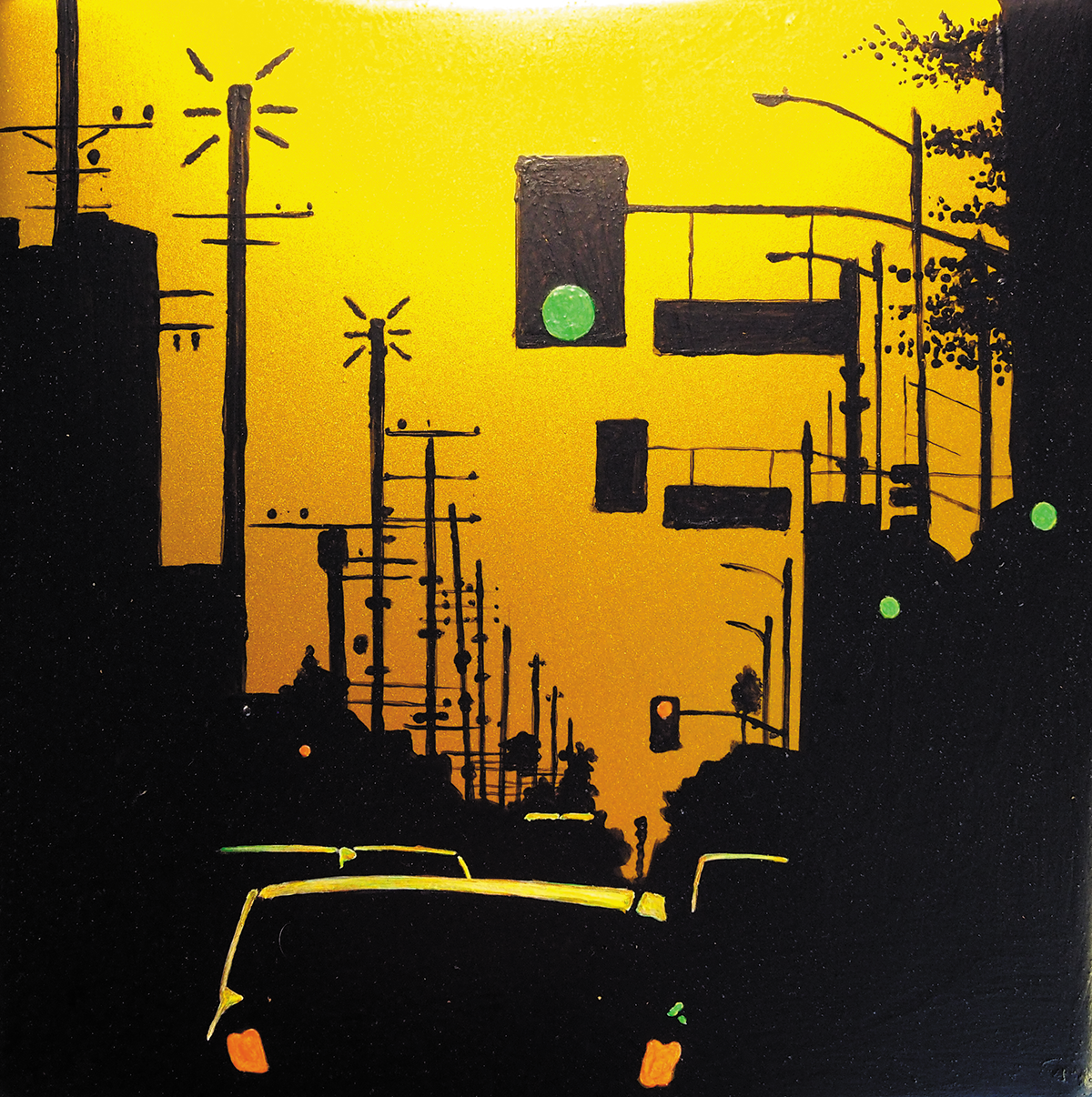 The artist, who started creating more prolifically in high school and then went to ASU to nail down a degree in fine arts, says that his years of skateboarding heavily influenced his love of landscapes, cityscapes and structural compositions. Getting close to and inside a building’s angles was one part that he liked; another was how being in those positions affected his visual perspectives. When a skateboarding accident took his right arm out of commission for a while, Brock learned how to draw and paint with his left hand, and he says this ambidextrous nature also works well when he’s bartending, as he’s working with a variety of items simultaneously to create cocktails.

It was while he was at ASU that Brock really got into photography; he studied with some notable Arizona photographers, such as Mark Klett and Betsy Schneider. He really fell for the medium. Brock uses his photography largely as a source from which to paint, but if he decides to exhibit more of his photographic work in the future, it would definitely be a good thing. His shots are vivid, perspective-driven offerings that pull you in and inspire your senses to reel. In some, you can feel yourself at the center looking outward.

The opening night reception will be a multisensory experience. In addition to viewing Brock’s artwork, attendees will enjoy goods from the evening’s sponsors, Casa Noble Tequila, Modelo Especial and Barrio Urbano, the first two providing drinks and the last, food. For those not wanting cocktails, agua frescas will feature seasonal fruits.