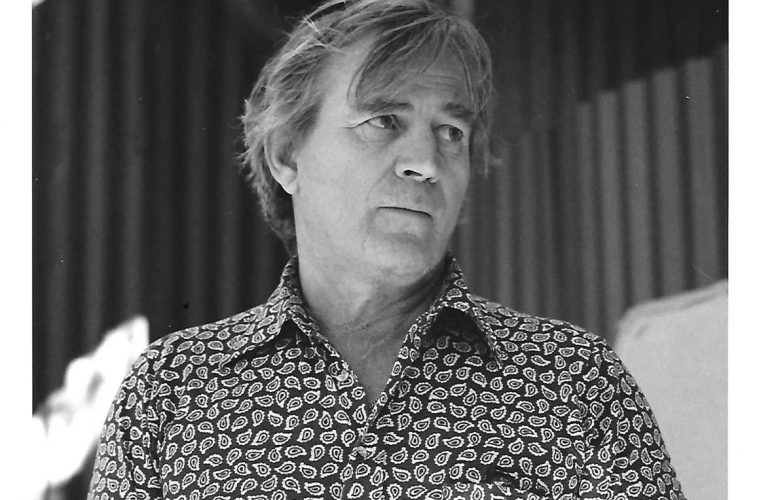 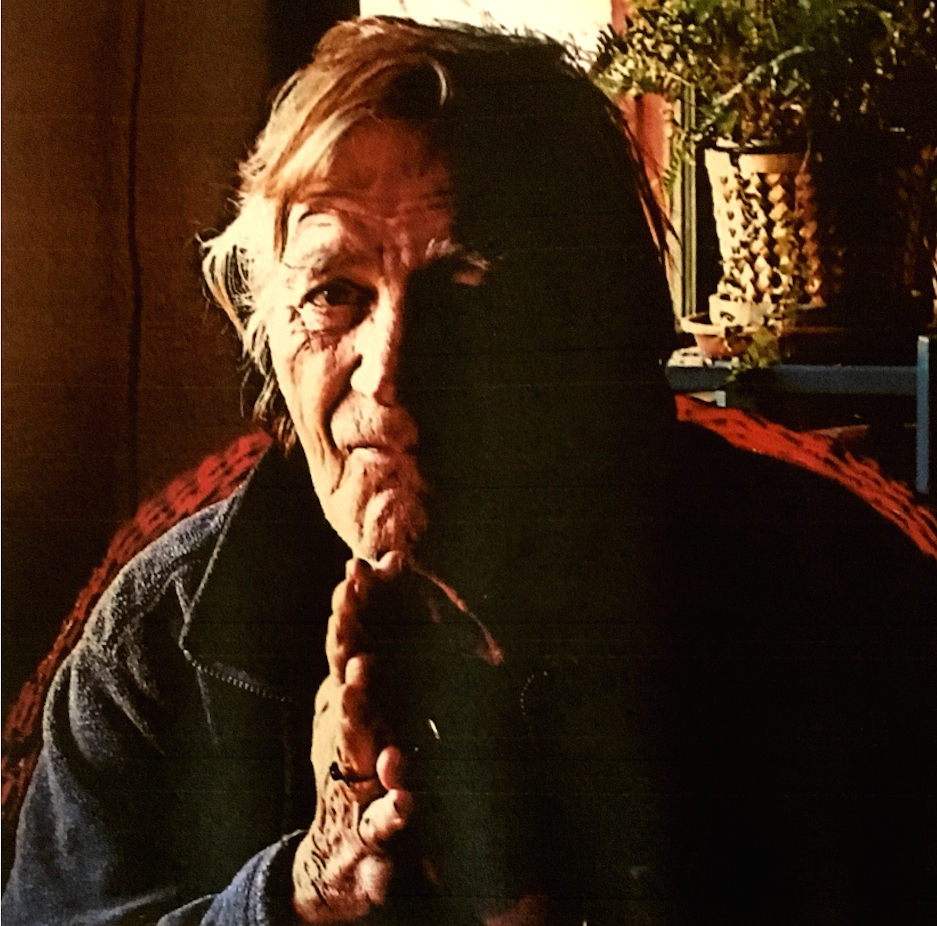 Though it might not be immediately evident, there’s a grand serendipity in artist James G. Davis’ first posthumous exhibition, held in the gallery of the most recent version of the Mountain Shadows resort. Both the man and the property are elemental tangles in the creative roots of Arizona history, their presences cemented and full of stories that outline their evolution.

April 13 is the public reception for the exhibition, curated by John Reyes, who was a longtime part of the team at Bentley Gallery. Reyes is now an independent curator who will be employing his esteemed eye to add another layer of interest to the Mountain Shadows through multiple exhibitions yearly, as well as at other galleries and venues in the region.

Reyes worked on the exhibition with Davis’ son Turner, a respected local artist in his own right. The younger Davis is dedicated to seeing his father’s artwork reach new galleries, museums and institutions, locally to internationally. Though the two were bonded in art, showing together many times throughout the years, and both being represented by Scottsdale’s Riva Yares Gallery for a lengthy stretch of time, Turner said that his own art career evolved naturally, as in not from paternal pressure or expectation. “We grew up in an arts-oriented environment, and I always helped my father, stretching canvases, things like that, but he was not the type of person to try and force someone in a certain direction.” 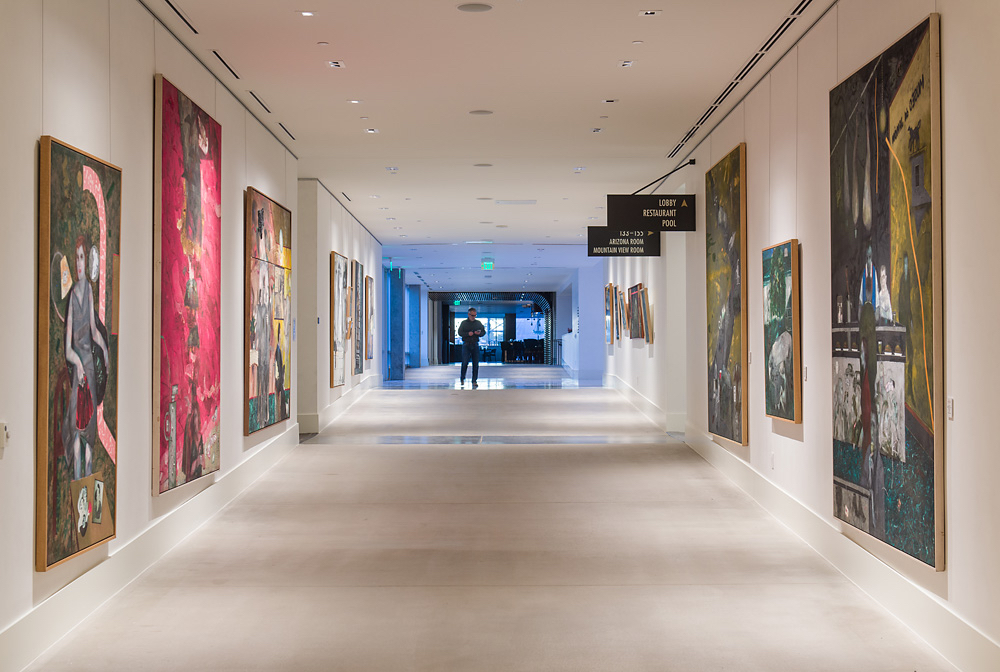 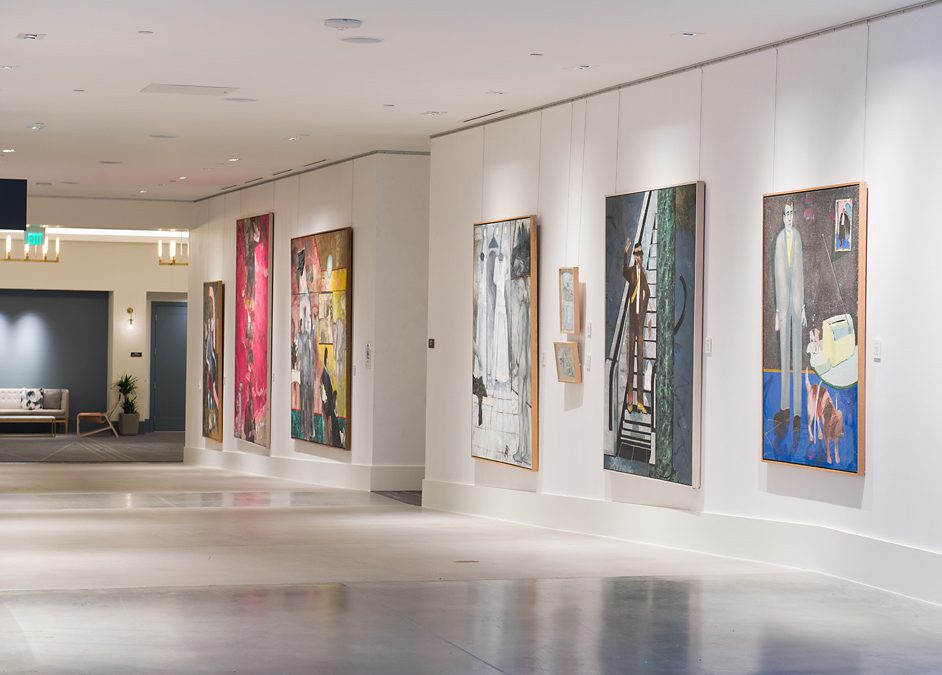 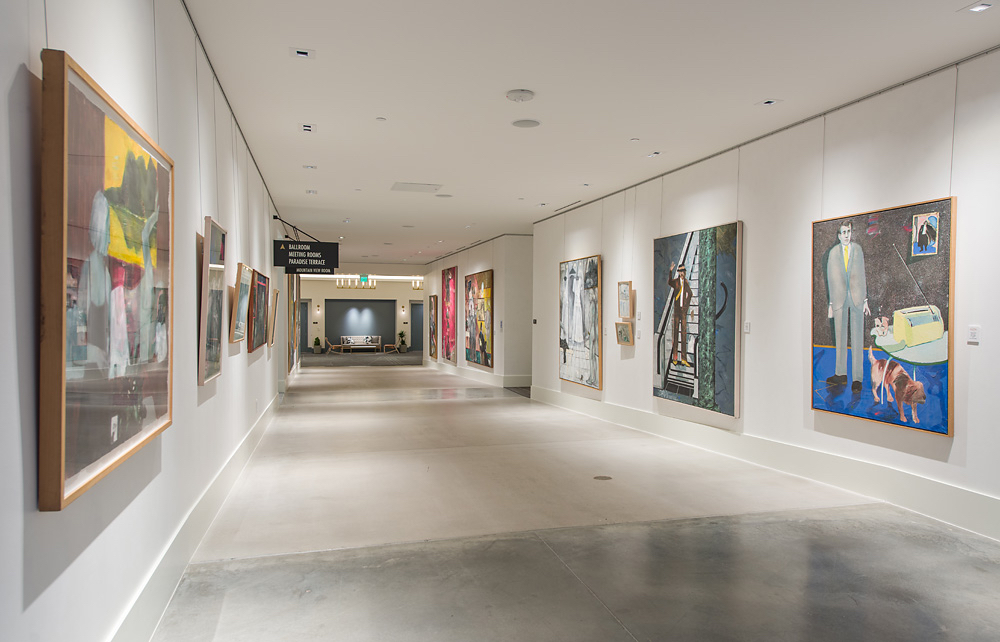 James Davis retired as professor emeritus in 1990 from the University of Arizona, and Turner said that his observational and subdued nature was present in the way he approached teaching. Turner said his father, a notably quiet man in general, would spend ample amounts of time watching students, seeing how they created and how their work developed before bringing his own thoughts and direction into the mix. When Davis retired from teaching, it was so that he could fully devote his time to painting and maintaining a busy exhibition schedule. He remained active until his passing in September of last year.

His penchant for observation, along with an inherent need to immerse himself in new situations, regions and experiences, is as much to thank for the depth and knowledge present in James Davis’ artwork as is his formal education. Davis was born in 1931, and as a young boy he suffered a harrowing trauma when his foot was pinned beneath a train. During his recovery he was mostly immobile for a period of time, and that’s when he started drawing. His son speculates that this experience might have created an ever-present association between art and escape for the elder Davis.

Eager to get out into the world and see what was possible, Davis didn’t bother with finishing high school. He did odd jobs, read voraciously and never stopped drawing. In Chicago, for a time, he painted toys in a toy factory. When he decided to go back to school, he applied to the University of Wichita, where a combination of life experiences and talent got him in the door, even minus a high school diploma. He went on to receive his master’s degree.

Davis paralleled his teaching career with life as a successful artist. He earned a place in the permanent collections of prominent institutions such as the Metropolitan Museum of Art, the Hirshhorn Museum and the National Gallery of Art. He also surrounded himself with artists. He lived at Rancho Linda Vista, an arts commune in Oracle, where his wife still resides. When he was traveling, he spent much of the time with creative peers. Additionally, though it didn’t factor into his teaching career, he was also a master printmaker.

You don’t have to know about Davis’ history, or his affinity for observation, to perceive the sincerity that pervades his work. As he captures the mechanisms of people, daily life and various scenarios, the realness is palpable. It doesn’t read as an outsider’s observation, but often more as someone painting his way out from the inside, recognizing his subjects and subject matter down to the origins that created the scene that resulted on the canvas. This is especially true when he is pronouncing himself the main subject, as in “Self Portrait – 1972.” His suit-clad self is tense in both stature and facial expression.

One of the remarkable things about Davis’ work is that he doesn’t over-define to create or set a mood. His narrative is often fluid and emotional, but conveyed in minimal strokes. For Turner, his father’s use of space was something to note. “The way he manipulated space was both flat and dimensional, simultaneously. He came of age during abstract expressionism, and it often shows,” he said. In this piece, Davis saved the motion for the framed painting on the wall behind him, further solidifying the main subject’s off-kilter mood. 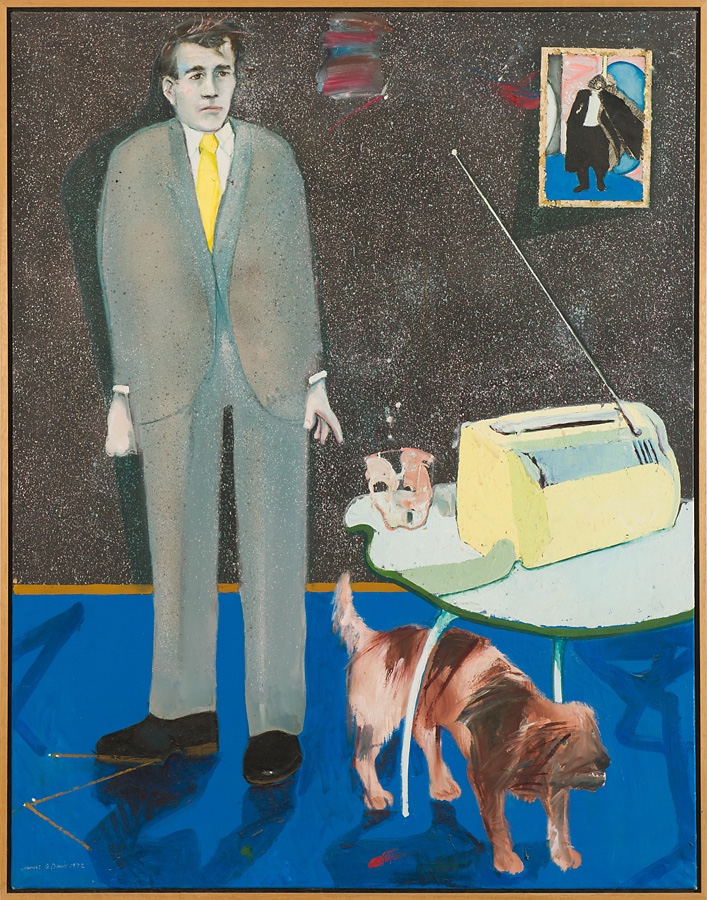 The composition in this self-portrait, as well as in pieces not present in this show, such as “I Breathed Deeply and Squeezed,” is reminiscent of Fritz Scholder. Both artists let you view the work without trying to beat you over the head to convey their distinctive messages. 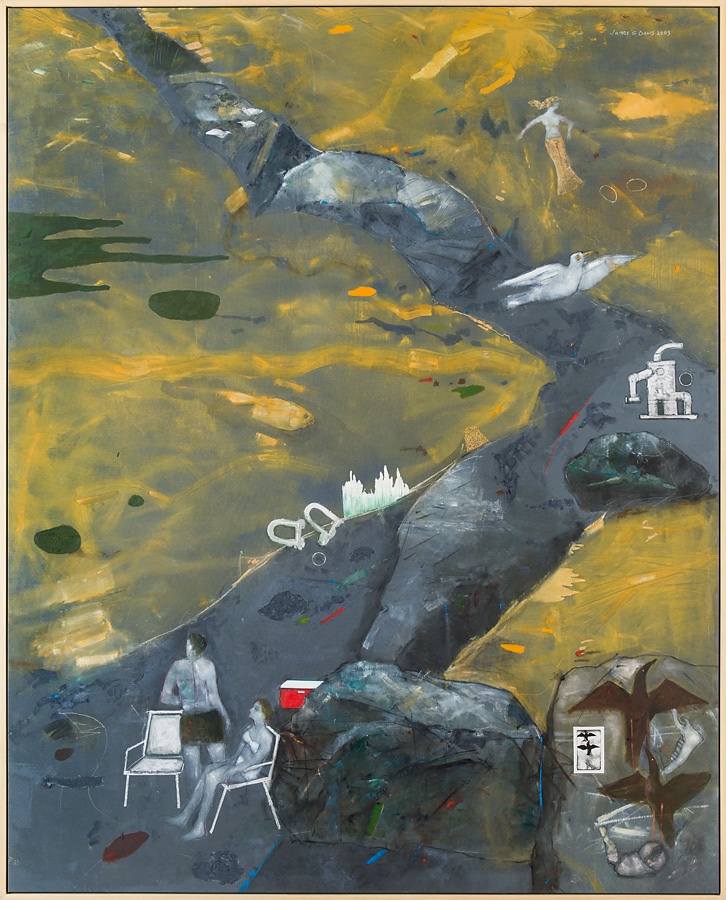 Davis’ fondness for oceanic settings shows up often in his work. His alliteratively titled “Sensual Sienna Sea” exemplifies what seems to be a reoccurring perspective on shore life. The people on the beach exude tranquility and seem personally calm. The chaos comes from nature: jagged rocks, choppy waters and sharp edges. Rather than simply observing, there’s a component in Davis’ work that seems to say that it’s okay to just let things be as they are. 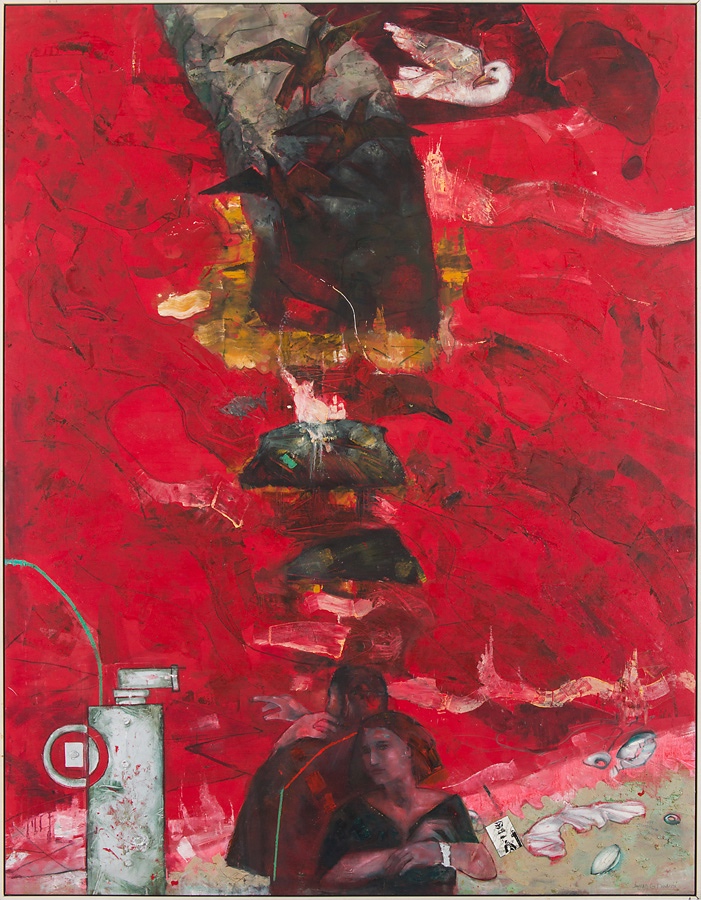 “Red Day on Blueberry Bay” perfectly captures one of nature’s powerful moods, as it tornadoes together humans, birds, winds and waves, with a deep and striking red that adds movement and force. 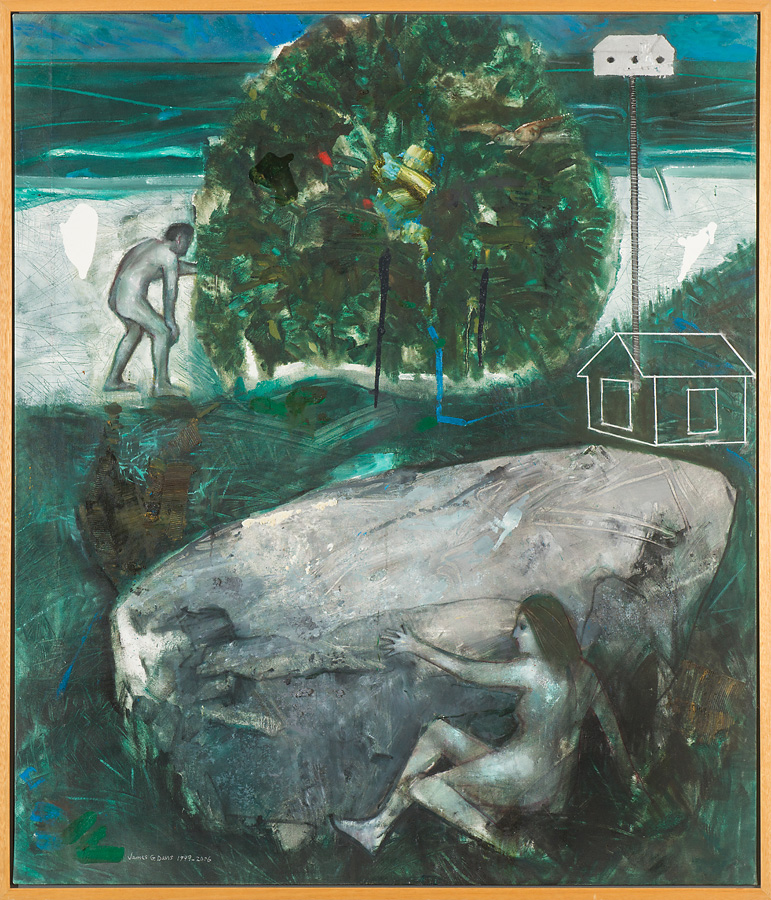 Another piece in this exhibition is “The Game,” which features a seemingly nude couple engaging in a game of hide and seek, though it appears that they are both hiding. Their outlines are stark, while the weight of the piece is contained in a tree centered in the painting. The tree’s colors are deep and dark. It is thriving, full of resting birds, but somehow it seems to bear the emotion in the scenario. It feels as if the tree is taking a comforting look at life’s inherent complexities, that frolicking and hiding are options of existing that help as we muddle through harder moments. Davis’ masterful paintings, despite their emotion, seem to whisper a reminder to take things in stride. 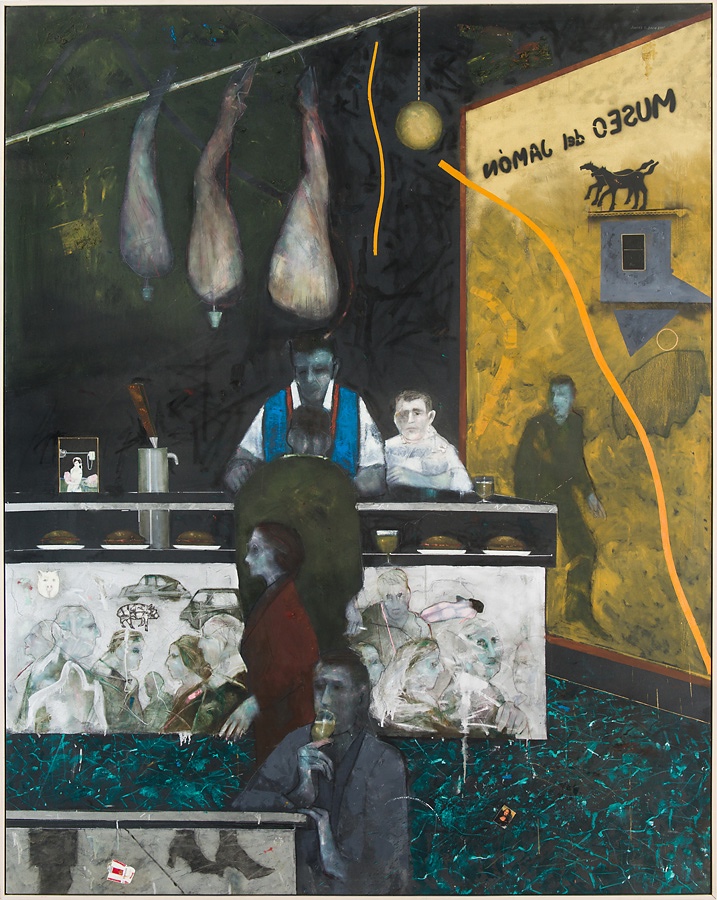 As Mountain Shadows begins its new life, the Davis paintings—along with a few of his etchings and drawings—add a grace to the resort’s minimal and airy lobby. Though the décor is scant, the building’s warmth comes from the natural light and mountainous backdrop that feels as if it is cradling the entire structure. Reyes said that he “couldn’t think of a better artist to populate the resort’s inaugural exhibition.”

William Nassikas, president and CEO of Westroc Hospitality, which owns this property—along with other vacation stunners like the Sanctuary Camelback Mountain Resort and Hotel Valley Ho—couldn’t agree more. “We wanted a gallery and artwork that would relate to the community,” he said. “James Davis is a great part of our Arizona art history, and it’s an honor to have the work as part of the Mountain Shadows rebirth.” 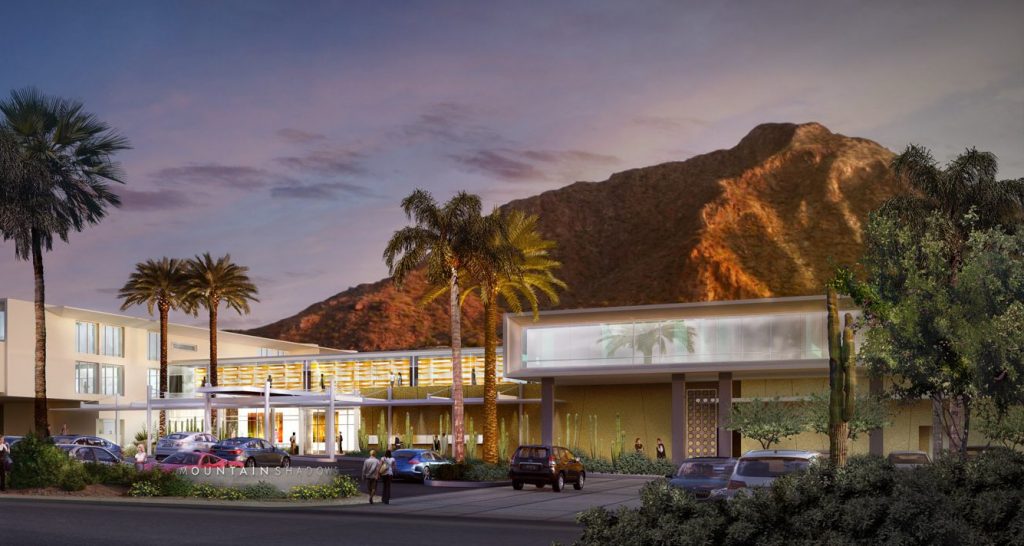 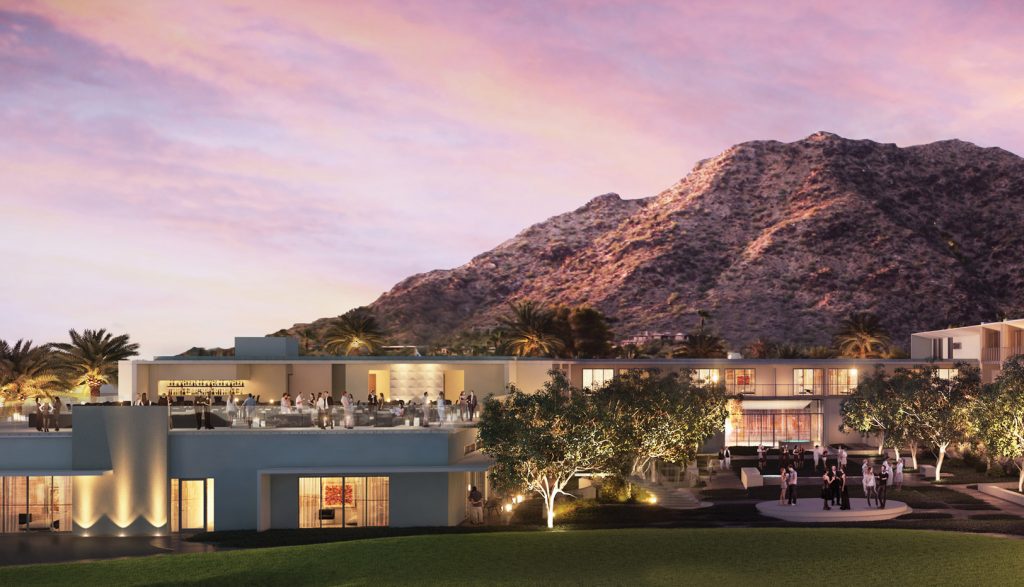 The original resort, of approximately 80 acres, opened in 1959. The ubiquitous Del Webb brought in architect Martin Stern Jr., who’d worked on some popular Vegas casinos, to bring a mid-century design with a little whimsy to the predominately Western landscape. At the time, they wanted to highlight a more modern lifestyle and bring in a bit of what Nassikas called “the ‘Mad Men’ aesthetic.”

When the original mid-century resort opened, it became a happening destination. It was even used as the location for a network television show, “The Brothers Brannagan.” The crime drama focused on two detectives, brothers, who shunned a traditional office setting for an operational home base in the lobby of the Mountain Shadows resort. Though the 39-episode show aired for only one season, it featured some well-known names, including Burt Reynolds, James Coburn and Jackie Coogan.

The property closed in 2004 and was sold to a development group that had intentions of giving it a renewal but were never able to turn it around, so it remained dormant until 2014. Westroc purchased it and brought in architect Mark Philp, of Allen and Philp, to create the new version of the resort, which Nassikas says has a “modern sensibility.” They renovated the golf course and in certain places on the site have incorporated concrete blocks from the original building.

A thoughtful union of art and architecture, the pairing of James Davis and Mountain Shadows highlights timelessness and transformation, as well as providing a chance to immerse yourself in a present moment that is rich with the fruits of the past and the possibilities of the future. The James G. Davis exhibition runs through the end of April. 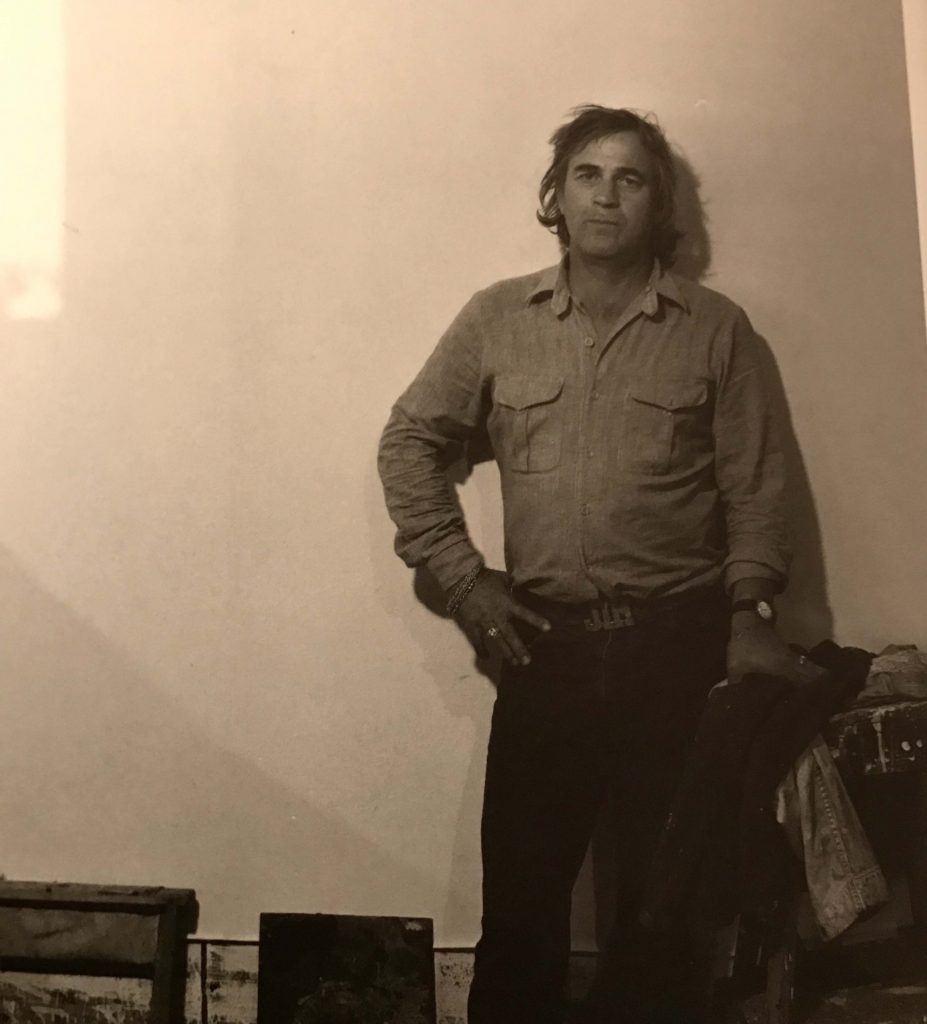