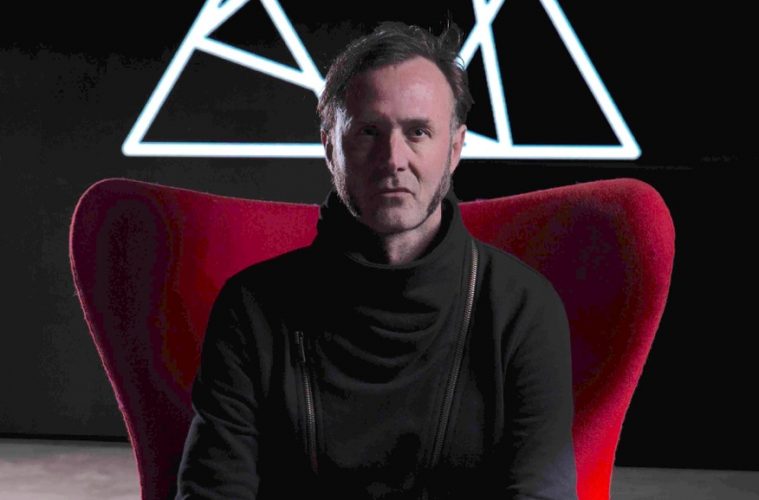 Devin Fleenor: The Future in a S.E.E.D. 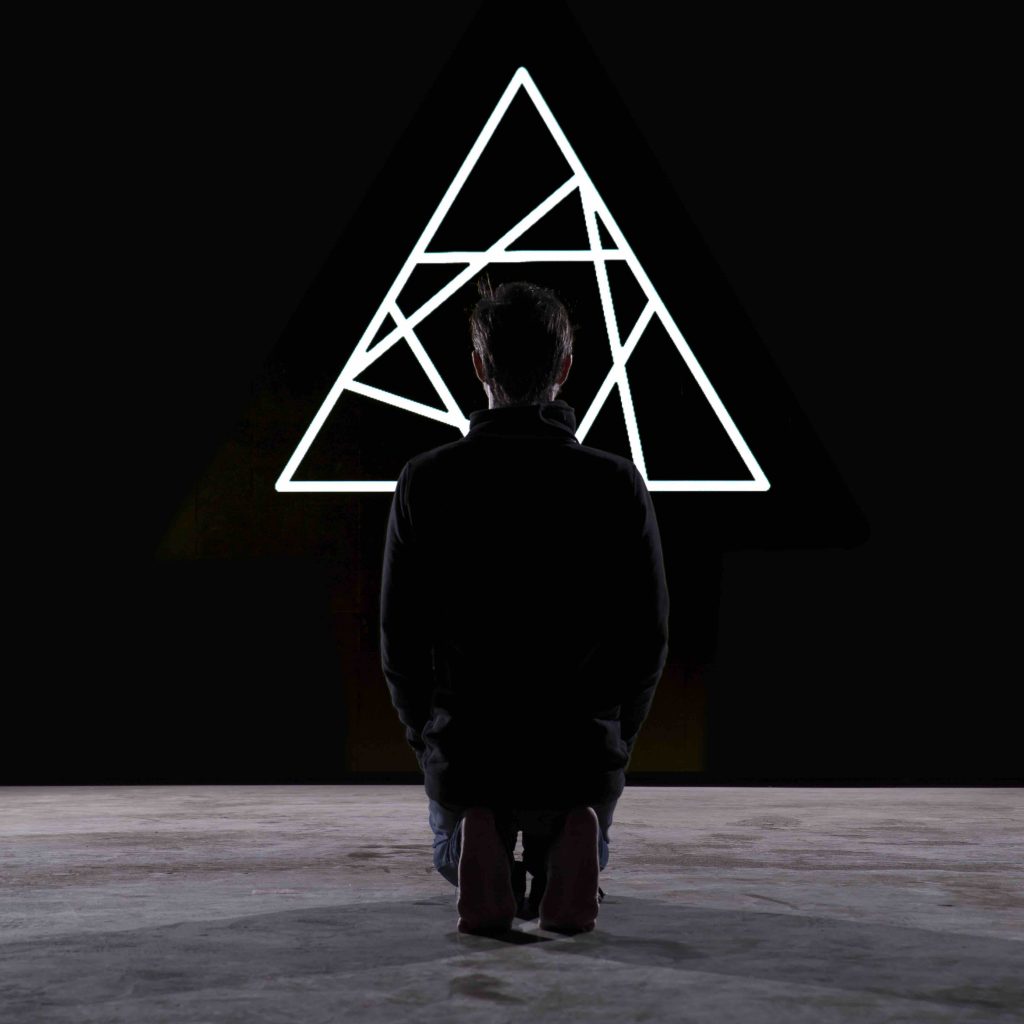 Devin Fleenor is a third-generation Phoenician, the product of a place without a distinguishing drawl or general disposition. Instead, Phoenix embodies the notion of rebirth, and its residents form a desert archipelago of perpetual renewal. It’s not surprising, then, that Fleenor has always imagined things not as they are, but as they could be. He knows the currents of change and adjusts ahead of time. In this way, he might be a typical Phoenician.

Fortunately for Fleenor, his art involves computers, a medium perpetually barreling toward the future. He’s done video production, music and laser art installations. The latter pursuit has taken up much of his time of late. The way Fleenor sees it, technology can help change humanity for the better. “I want to play with how we can use technology to reflect consciousness. I believe it can bring about an incredible understanding of human happiness,” Fleenor said. He also realizes that technology can isolate, but like anything in life, technology is multi-dimensional, and he aims to expose people to the dimensions that will help them connect. 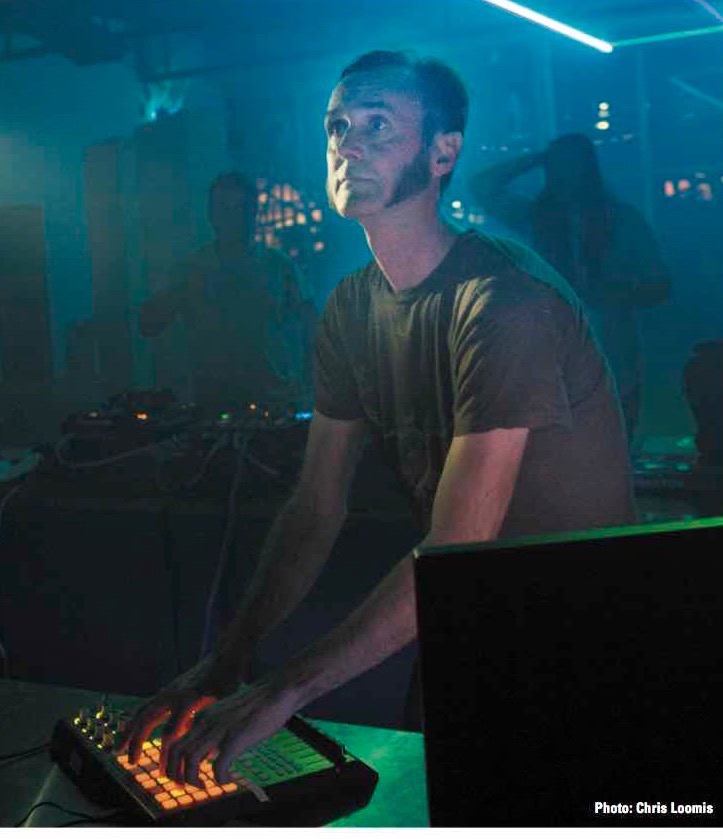 Fleenor grew up as the computer was first emerging. At a young age he was drawn to the strange device, and as an eight-year-old begged his parents incessantly to buy him one. Right when he got his first computer—the TI-99/4A—he started programming. “The programming language was called BASIC,” Fleenor said. “That’s all I would do, experiment and try to make little games. You could do some graphics and simple logic and interfaces. I just had an affinity. I’m grateful for that.” Though programming and making games was fun, Fleenor always wanted to make music with computers, even though there wasn’t the infrastructure to do that at the time.

“Some of my friends from junior high school remember my elaborate hoaxes about music-making computers that I had access to,” Fleenor said. “I would read computer magazines and knew that would be my world someday. They were very, very expensive back then.” School wasn’t engaging for Fleenor, so he would spend most of his time working with computers and making videos with his friends. Most of what he knows is self-taught. He is in many ways a product of the DIY age invoked by the onset of the computer.

To foster his musical passion, Fleenor would go to the local mall and play keyboard until they closed. He was entranced by the synthesizer and its capacity to stretch the bounds of music as he knew it. The synthesizer was the voice of the future, and he wanted to harmonize with it. “It wasn’t until around the time I got out of high school that I figured out how to get enough money to buy my first sampling workstation,” Fleenor said. “It was an Ensoniq EPS 16+, with a 61-key keyboard. It was an all-in-one workstation that you could play live. That was the beginning of me being able to jump into the artistic side.” Fleenor’s favorite band was the new wave group Depeche Mode, and he aimed to make music similar to that.

Fleenor ended up going to Arizona State University and majoring in psychology. After his undergrad, he signed up for a graduate program in neuropsychology, and he liked it, but he enjoyed working with computers and making music even more. He formed a band around that time called Mr. Meeble, and they were eventually able to go on a European tour. That opportunity was more exciting than grad school, so he decided to follow his heart. “That was the end of my academic path,” Fleenor said. “Not to say that I don’t respect academia, but I definitely can’t see myself ever going back to school. There are certain people that are made for school. I was never one of those.”

After months of touring with Mr. Meeble, Fleenor found himself financially depleted and seeking ways to make money. His girlfriend, Karina, suggested that he work with lasers like he did during the tour. That struck a chord, and Fleenor decided to use his SEO skills to create a website that advertised world-class laser services. But the problem was, at that point, he wasn’t a world-class laser guy. He was really more of a beginner. However, he didn’t let that stand in his way.

“When I built the website I had to create this image of expertise even though I had very little idea what I was doing,” Fleenor said. “I remember the first time a person called from a search engine. The conversation was about me having to represent. Really, I was speaking about my future me. That’s the best kind of lie, when you are speaking about your future life, while manifesting it into a reality. That was the beginning of Epic FX,” Fleenor said. 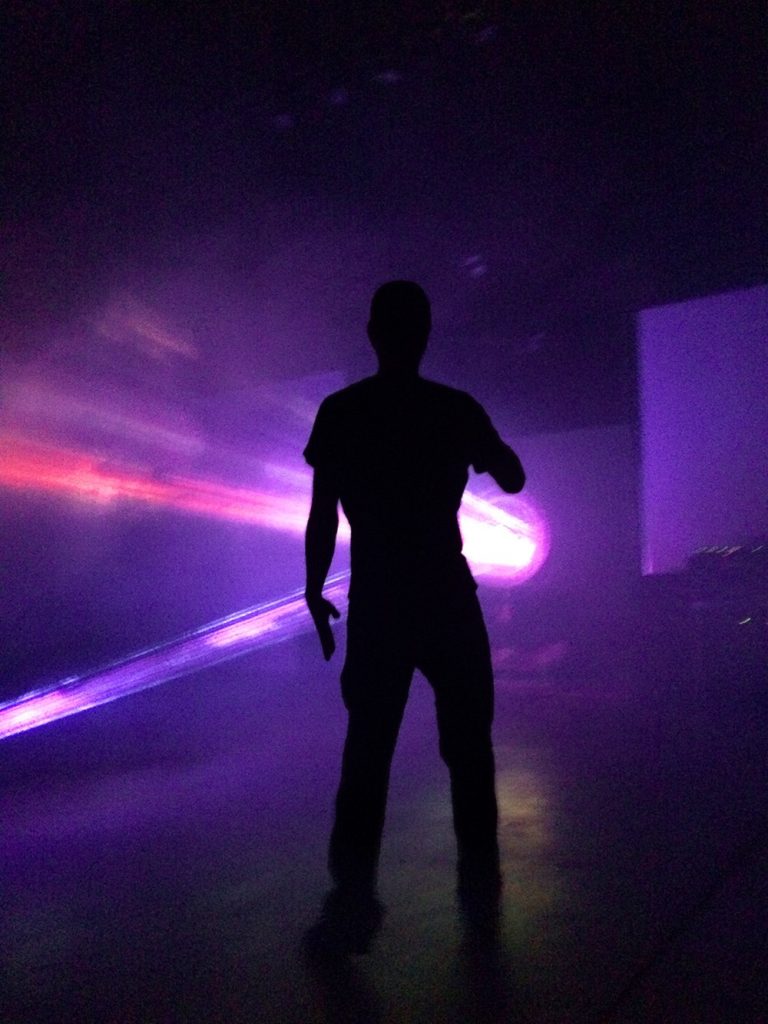 Epic FX took off around 2012 and enjoyed quite a bit of success leading up to the 2015 Super Bowl, which was played in Phoenix. Fleenor wanted to do something in response to the game but struggled to come up with an idea that wouldn’t directly benefit the NFL. He eventually decided to create a guerrilla-style art project, where social media feeds were projected in real time above the place where pregame festivities were being held.

“I remember reaching out to Michael Levine about doing a counter-culture display project, and he wrote me back that same day,” Fleenor said. “He was totally down and gave me access to his building adjacent to the Super Bowl festivities.” Fleenor worked nonstop for a week conceptualizing and creating the project, which broadcasted a large-scale anti-corporate message on the Bud Light tent. Bud Light corporate tried to stop it by getting the police involved, but it was technically legal, so they couldn’t shut it down. Fleenor displayed live tweets of people commenting on the growing corporate presence surrounding the Super Bowl. “A lot of people enjoyed it,” Fleenor said. “I loved the idea of censorship-free broadcasting. It was so inspiring, the things people were saying. They really resonated with it.”

In the beginning of 2015, Fleenor came up with the idea of producing S.E.E.D. (Stellar Emissions Encapsulation Device), a cube where lasers interact with human activity to create an immersive experience in the form of symbols, geometry and frequencies. “For a while I didn’t have many artistic outlets,” Fleenor said, “then I started thinking about the S.E.E.D. project in 2015. From May to June, we built the first one.” Phoenix Magazine covered it for their “Future of Phoenix” issue. The project is still in development, and Fleenor has been able to achieve a lot of the things he originally imagined. 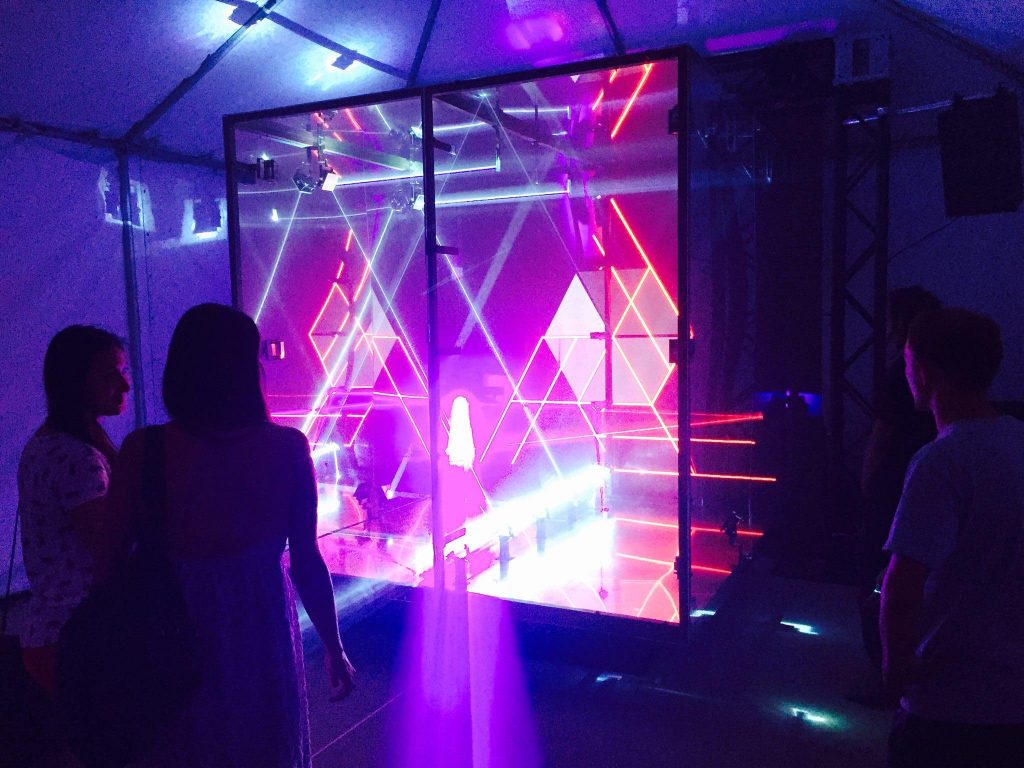 Fleenor submitted S.E.E.D. to various festivals and art shows around the nation, and it was selected by the Currents New Media festival in New Mexico. For the festival, Fleenor changed all the dimensions of the original and added a new algorithm. Although the piece didn’t come together quite like he expected, he is still optimistic. “In my mind, S.E.E.D. is a museum piece,” Fleenor said. “It’s challenging and motivating, and people love it. So you can’t dwell on the long-term successes or goals you set. You have to be about the process.”

Late last year, Fleenor attended Art Basel in Miami to show an interactive piece he had developed just prior to the show. He was inspired to do the piece after seeing a dimensional painting at a Brooklyn gallery. However, once he got to Miami, his piece malfunctioned and he couldn’t show it. This left him quite disappointed. On the last morning of Art Basel, he heard about the Army leaving the Dakota pipeline, so he decided to project a massive laser display in downtown Miami. He found an Airbnb downtown with a view of the city that allowed him to project his message on an adjacent high-rise. It said “Water = Life, Oil = Death,” to stand in solidarity with the protestors.

Fleenor hopes to continue helping people heal through technology. “I’m a big fan of anything that heals your brain, giving greater balance and happiness and helping one become more of a collective player,” Fleenor said. “I’m all about forward evolution.” 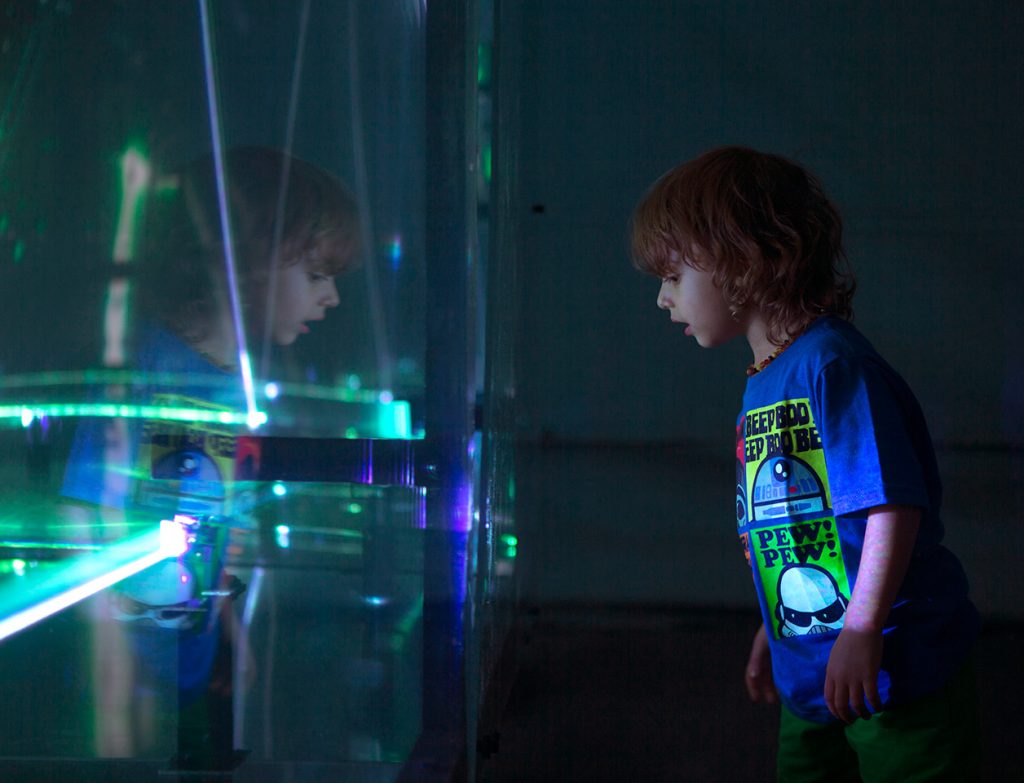