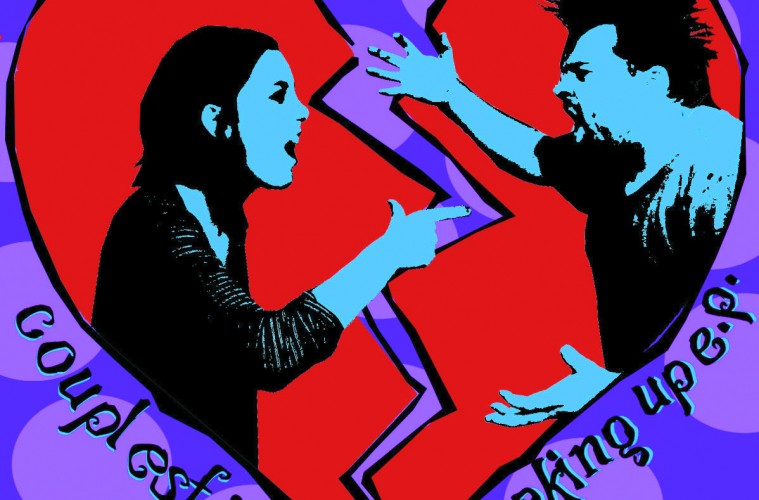 This has to be the most interesting concept for a band in quite some time. Couples Fight is the dance punk duo of Travis James (Travis James & The Acrimonious Assembly of Arsonists) and Alaynha Gabrielle, and they have taken the demise of a relationship to a whole new level. While most songs about lost love are mournful, slow and sad, this EP takes the horror show of breaking up and turns it into a miniature synth-fuelled musical of punk-tinged pop songs. This is exactly the crap that goes down when any couple falls apart.

While the music is high energy and catchy, the gold is in the lyrics, as James and Gabrielle literally fight back and forth using call-and-response phrasing. It’s never been so enjoyable to witness a couple becoming a train wreck. This is pretty much a concept piece, moving from “Whatever You Want,” which is a fight over dinner, to “Um, Who Was That,” the start of suspicion and lack of trust. Then “No, Not Tonight,” highlighting the lack of desire for intimacy, and “Cover Song,” which is a humorous piece about sleeping apart in the same bed. Finally, “Space” is the last frontier of any breakup before the actual breakup.

Breaking Up is an accurate portrayal of the stages leading to the death throes of love. Clearly these two know that territory well, at least well enough to write a song about each stage of the cycle. There is a wonderful discord found in the jaunty, upbeat electronica backing this vicious, lyrical fighting. It ends with the truest words possible, in case you’re unaware: “‘Taking a break’ means breaking up.”