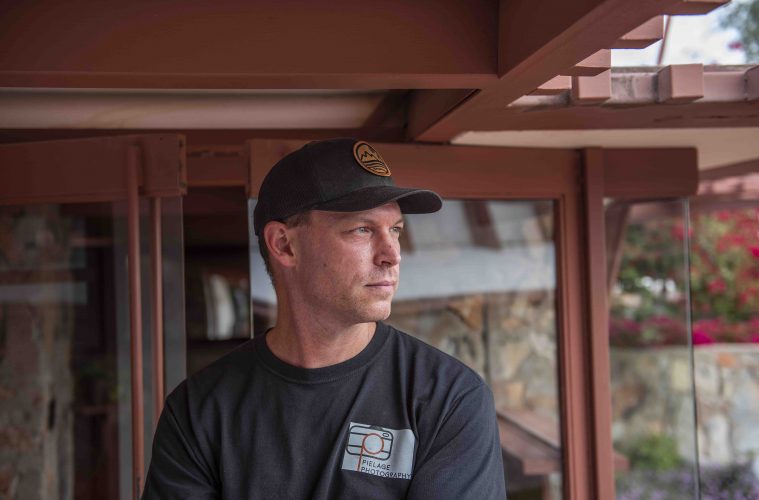 Like a wildlife photographer waiting patiently for that one moment when a rare animal reveals itself, Andrew Pielage waits for natural light to perfectly envelop the historic Frank Lloyd Wright sites he photographs. His carefully orchestrated images are sensitive to every line, angle, and shape that make up Wright’s famed architecture.

Pielage is on a mission to photograph all 431 existing Wright structures, which seems an almost impossible endeavor, especially since he is self-funding the project. However, like any huge undertaking, if you break it into smaller tasks, it becomes less overwhelming. Pielage is just taking it day by day, site by site, and he doesn’t have any publishing or exhibition deadlines to meet, only the goals he sets for himself.

But let’s take a few steps back to learn how this all started. Pielage grew up in Arizona. His father was an engineer and a published geologist while his mother worked in healthcare. They were both adventurous, enjoyed spending time outdoors, and their attachment to nature definitely rubbed off on Andrew. He has visited 25 national parks and hiked to the bottom of the Grand Canyon 20 times.

Pielage is a self-taught photographer. He remembers his first camera, a Walgreens disposable his mom gave to him when he was a kid. He would take lots of photos on family camping trips and still has those albums. After high school, Pielage went to Northern Arizona University where he earned a degree in outdoor education and leadership. While the photographic arts were not part of his curriculum, he did take one summer course in black-and-white photography that seemed to stick with him.

After graduating from NAU, Pielage worked full-time in hospitality and for REI, but he also started taking pictures on the side. Eventually, he left his comfortable day job to concentrate on being a professional photographer.

How did Pielage come to start photographing Frank Lloyd Wright structures? He had signed up for a group tour of Taliesin West – Frank Lloyd Wright’s winter home and school in Scottsdale. But at the time, photography wasn’t allowed. Luckily, Pielage had a connection with someone that worked there and he was able to get permission to bring his camera.

The Frank Lloyd Wright Foundation loved the initial photos he took and later asked him to teach photography workshops. He now runs the workshops at Taliesin West in Arizona, Taliesin in Wisconsin, Fallingwater in Pennsylvania, Unity Temple in Illinois, and Price Tower in Oklahoma. At Taliesin West, the workshops are also open to youths from grades 8-12.

What’s ironic is Pielage didn’t start photographing Frank Lloyd Wright’s work with the intent of documenting all of the existing 431 locations. Instead, it sort of happened accidentally. He was being interviewed by KJZZ’s Lauren Gilger about his photos of Wright buildings and she asked how many he planned to document. “All of them,” he replied, without even thinking about how that would change his life.

There it was, carved in stone, his voice on-air and forever part of the radio archives. At that point, there was no turning back. Now, he just has to get it done. But Pielage calls the improvised reponse a blessing in disguise. He says his passion for Frank Lloyd Wright’s work “very quickly turned into an obsession.”

Frank Lloyd Wright once said, “More and more, so it seems to me, light is the beautifier of the building.” These are words that Pielage has taken to heart and he has made photographing Wright’s work a study of natural light. Pielage believes that he would be doing the late architect a disservice by using artificial light to create or enhance the photographs.

Wright pioneered the idea of organic architecture with natural light being one of the core components of his design methodology. This holds true for how light affects both the exterior and interior spaces. “That was really apparent to me the first time I went to Taliesin West,” says Pielage, “The way the windows are positioned and how light bounces around. He was so good at controlling light.”

To photograph the architecture, Pielage uses special tilt-shift lenses that help to remove distortion created by wide-angle lenses. He often photographs in vertical sections, later combining the images in Photoshop and Lightroom to create wide and extremely detailed photographs.

For the photo geeks out there, Pielage is typically shooting in low ISOs of 50 or 100 and at an aperture of around f16. The lower ISO settings keep the photographs razor-sharp and free from the noise you find in higher and more sensitive ISOs. The f-stop seems to be a “sweet spot” for the 17mm and 24mm shift lenses he uses. And of course, he almost always has his Canon DSLR mounted on a tripod.

When asked which of Wright’s homes he would most want to live in, Pielage’s responded without hesitation, “Fallingwater. To be in that house with the windows open, to feel that waterfall, and have that connection, it’s life-changing. I could spend every second of my day in that space,” he said. The home, located in Mill Run, Pennsylvania, was designed in 1935 and constructed between 1936 and 1939. In July of 2019, Fallingwater was placed on the UNESCO World Heritage List along with seven other Frank Lloyd Wright-designed sites.

One of Pielage’s favorite images of Fallingwater was captured unexpectely in a matter of seconds. Pielage was teaching a workshop at the property. His students were just packing up after a rainy day when he noticed a stream of sunlight breaking through, illuminating several visitors holding umbrellas. He took the photograph in less than a minute with no tripod or staging. He wasn’t even photographing that day, having spent the previous 30 shooting. On this particular day, he was there to help his students shoot the iconic home. But when the magical moment arose, Pielage was there to capture it.

Pielage has a long road ahead of him to complete his project. It’s costly and time intensive, and will zig-zag him all over the country. For each building he has to organize with the owners to get permission and access to photograph the interiors. At each site he scouts out the best lighting, angles, and equipment choices before making any exposures. He has discovered that many of the homes are perfectly lit for only a small window of time.

Afterward, there is a lot of time spent in post production (which he enjoys) where images are composited, edited, and finalized. So far, Pielage has documented 85 Frank Lloyd Wright structures and has over 40,000 images stored in an Adobe Lightroom catalog.

Pielage’s work has been published in National Geographic Traveler, the Frank Lloyd Wright Foundation Quarterly, Phoenix Home & Garden, and Professional Photographer, to name a few. He has been featured in Architectural Digest, ELLE Decor Italia, Lonely Planet, and on Fortune.com, among others.