Sweetbleeders | We Were Never Here

Sweetbleeders are a legendary Phoenix band that over the last 16 years have graced us with some amazing music, both on record and on stage. Two years ago they posted a three-song sampler on Bandcamp urging fans to purchase it to assist in funding their next full-length album (their first since 2007’s bzzz). Last month this dream became a reality.

We Were Never Here is a latter-day baroque pop masterpiece.

I first became aware of Sweetbleeders in 2009 when they covered Let’s Have Fun’s “Merrily” for the landmark When in AZ compilation. At that time, they already had a decade under their belt. Over the years the band has featured many amazing musicians on their roster, including the late Mark Erickson (Colorstore) and Mike Montoya (Fatigo), among others. I remember them as being the brother band to Colorstore, mainly because Sweetbleeders was fronted by Robin Vining with Erickson on guitar—whereas Colorstore was fronted by Erickson with Vining as a multi-instrumentalist. It was a beautiful setup, so there is some bittersweet joy in the fact that Sweetbleeders continue to this day.

The Sweetbleeders 2015 lineup is a pretty impressive one, featuring members both old and new, with Robin Vining at the helm (vocals, guitar, piano and other stuff), Steven Dueck (drums), David Marquez (bass), Keith Kelly (flute, sax, clarinet), Megyn Neff (violin), and Jon Rauhouse (pedal steel guitar) and featuring Brendan Dueck (melodica and keys), as well as the late Amy Ross providing additional vocals on the record. It’s something of a dream lineup, and this is definitely a dreamy album. It should also be mentioned, due to the record’s rich production value, that it was engineered by Mike Hissong with Catherine Vericolli and Dominic Armstrong at 513 Studios.

There is something that makes this the perfect Arizona winter album. It begins with the sound of singing birds, and then dark bass tones and melancholic strings kick in. This is “Albuterol I,” the short introductory invocation and the first of four “Albuterol” pieces found throughout.

It ends as it began, with singing birds. 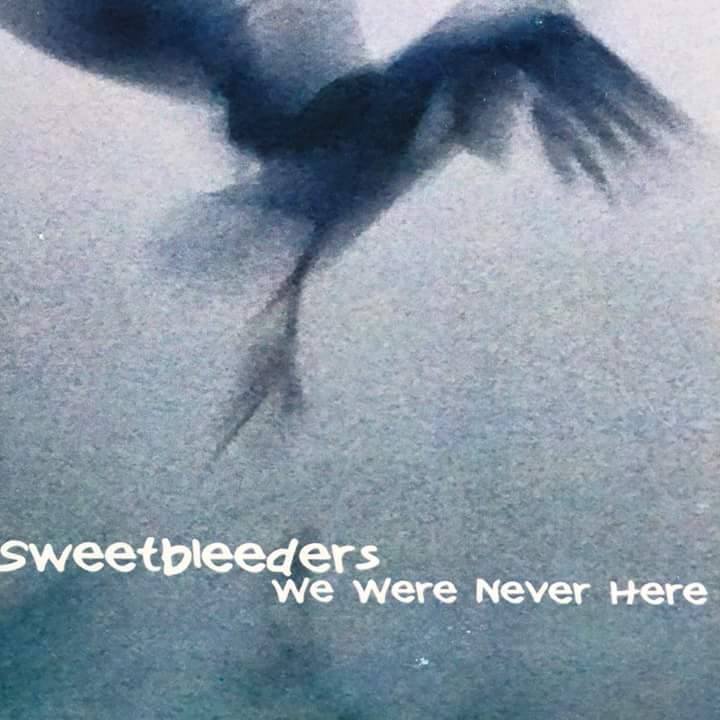 You may think that you’ve walked into Pet Sounds–era Beach Boys at the start of the stunning “Dumptruck,” with organ, sleigh bells and all the instrumentation. One of the songs that appeared on the preview sampler, it is musically amazing and lyrically quizzical, revolving around a vicious woman. Ending with almost a sense of understanding, it’s as sweet as it is jaded, and the discord between the sunshine of the music and the pointedness of the lyrics is thoroughly enjoyable.

“Albuterol II” follows, and it’s another from the sampler, but in this case it’s about a lost friend, an affection for mixing asthma medication with alcohol, and a guilty lost look back upon one’s past. It’s a stunner, and while I could speculate what or who it is about, I’d rather just quote the touching final lyrics: “Guilt’s the bitch, let’s share it ’cause it wasn’t only you, hearts and loves stick in your throat, trapped inside a dreaming ghost, wish that I could hear you, friend, talking on the other end.” Hauntingly enough, the song features vocals by the late Amy Ross from Nowhere Man & The Whiskey Girl, sadly, perfectly.

There is a cabaret jazz joy to the wry-spirited “On Their Backs,” which seems as political as it does derogatory. With a catchy piano and ukulele melody and a delivery akin to a theatrical-pop number by Queen, it is where the charm of Vining’s vision and song writing truly start to enchant.

It is the ultimate pop song about sex and death, eros and thanos, and it is delightfully clever in every capacity.

There is almost a hint of soft surf guitar to “Some Curiosity,” in a “Sleepwalk” sort of way. It also becomes evident that Vining has an unworldly, beautiful voice that comes from some source on high. This is one of the most lovely ballads I’ve heard in ages, and there is no irony in it, just a lovely song superbly executed. Yearnful, mournful and beautiful all at once—so dreamy it almost hurts.

If “Someway” isn’t a clear single from the album, I’m not sure what would be. It is drawn from a 15-year-old solo recording by Vining and features Ross, as well as some of the best drumming by Dueck on the album. It is another gorgeous number, with an amazing rollicking flow, yet it is clearly born out of sadness and loss. I suppose there is a lot of that here, and maybe that’s the gift of this album, an alchemical process that transforms our common tragic events into something uplifting and majestic.

The first jaunty semi-instrumental in the center of the album is called “Bicycle Sex,” which sounds like cartoon music or possibly the theme for a bawdy silent film. Either way, it is a hilarious romp, suggested only by the music, laughs and “doo doo doo doo doo doo doo.” Meanwhile, “Albuterol III” continues the pervasive theme, combining elements from the album so far, including singing birds, while introducing clarinet and trumpet to the mix. These instrumental songs are the centerpiece of the album, and if it is issued on vinyl, they would clearly be the end and beginning of their respective sides.

The baroque pop continues right along with “Sleeping Beauty,” which seems to channel their inner Ben Folds a bit in a cautionary tale that challenges our beauty-charged society and the cosmetic surgery industry. The harmonies are simply heavenly on this piano-based number, with enough of a mid-20th-century dance hall vibe to keep you grinning. In the end our protagonist declares, “I’m so glad we’re sharing our apple a day, keeping those quacks and butchers away, we will grow old and ugly anyway.”

The title track is the last from the preview sampler, and it’s another single-worthy tune. Featuring amazing violin from Megyn Neff and pedal steel by Jon Rauhouse, it is another song of sadness, loss and self-reflection, and it creates a comforting beauty, like your favorite blanket. Slightly hypnotic and soothing, with probably one of the simplest arrangements on the album, it concludes with, “People you know, are kinda funny, people you know, you never know ’em at all.”

With a wistful violin introduction from Neff, “No Pain” is slow and lovely, floating with beautiful harmonies, a melodica and stunning percussion, until it goes off the rails completely as Vining waxes poetic about a backyard pet cemetery and even lists its occupants. It is at once childlike and sinister, a feeling brought forth from the hyperbolic cartoon soundtrack. It finishes as it began, drifting off into memory and a bit of aural bliss.

The final Albuterol installment (“Albuterol IV”) returns to the theme, now drawing in violin, guitar, piano, harmonica and more. There is a sole lyrical passage: “Albuterol, how I depend on you…” as if added by an angelic choir, but the song ends with ominous chords and crazed guitar while cymbals crash. 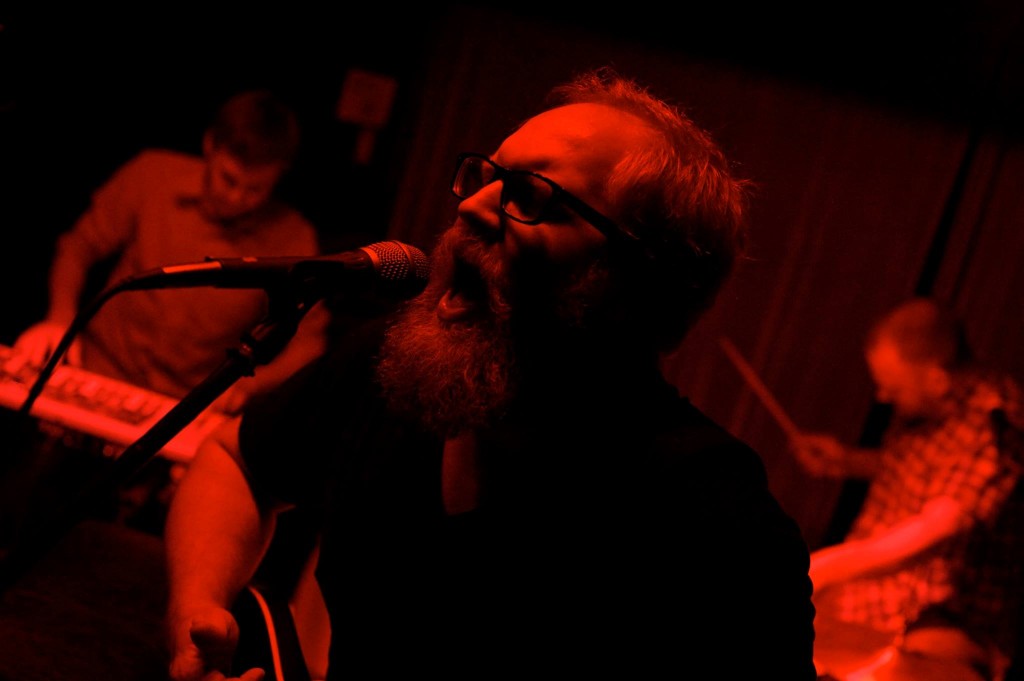 “Back in Time (Remember the Night Waltz)” seems like a song from a long time ago (at the very least the ’90s but perhaps as far back as the ’50s).

It’s a piano-driven lullaby, and it is indeed a waltz.

I imagine a beautiful moonlit starry sky and a grand piano in the middle of an open grassy field. It’s a romantic, nostalgic piece, full of smiling memories, that concludes with a wonderful vision: “I’m back in time with you, come back in time with me.” It would seem to be a great ending, but that wouldn’t be Sweetbleeders’ way.

Thus, the doo-wop groove of “Stupid Face” is the grand finale—an uproarious piano rager about ending a relationship with a terrible partner who wants the torture to go on. The song reduces the band to the core trio of Vining, Dueck and Marquez, and the album could end no other way: with a laugh and a smile, once again about horrible things. “Are you crazy? Are you nuts? What makes you think I ain’t had enough of your stupid face and those bad mistakes that are ruining my life?” Vining sings with a hilarious delivery that masks a vicious attack.

We Were Never Here has been four years in the making, following the sampler. It’s the first new complete work since 2008’s EP, The Lightning Bug Luau. After all this time, Sweetbleeders are still able to put out a relevant indie pop record that sounds as fresh and fantastic.