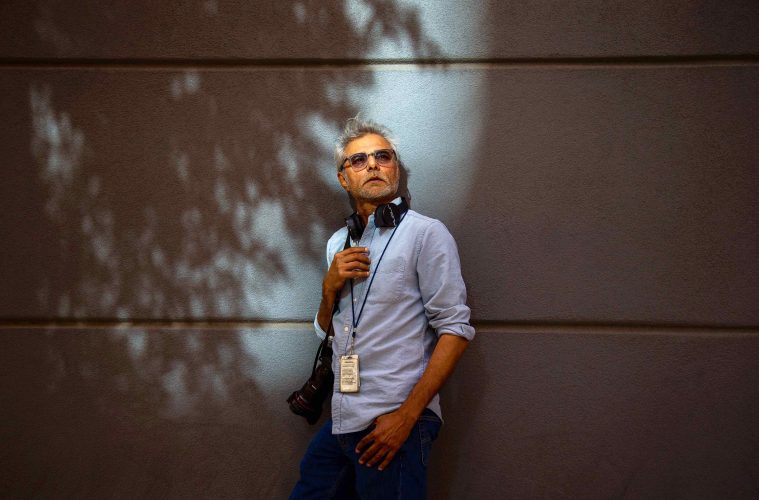 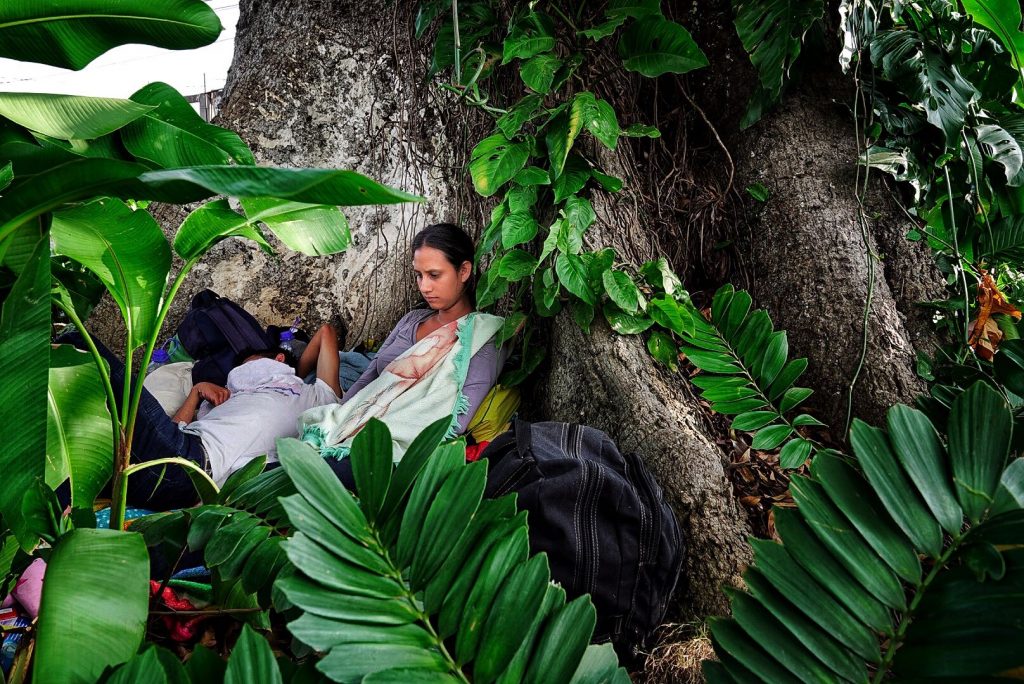 Images can tell stories that transcend time and history, align our collective souls, or change our minds completely. Photojournalist Nick Oza, who has worked for the Arizona Republic since March of 2006, is not only locally known but an internationally esteemed two-time Pulitzer Prize–winning photographer.

To say Oza’s resumé is impressive is an understatement. The Mumbai, India-born journalist is a humble yet steadfast arbiter of truth in a world weary from misinformation and “fake” news. When everyone with a smartphone can be a photographer, it takes a special talent to make photos that evoke real feelings, images that inspire viewers to think about their own place in the world and empathize with others they may never meet. Oza possesses this ability, and his talent behind the viewfinder is something to be celebrated, even when his images echo a world we do our best to ignore.

Old enough to know better, but young enough to burn the candle at both ends, Oza is, by his own admission, part of a dying breed. While good storytelling will always be an important aspect of humanity, the type of in-depth journalism Oza espouses is on life support. Over the coming decades, only time will tell if there is any hope for revival. 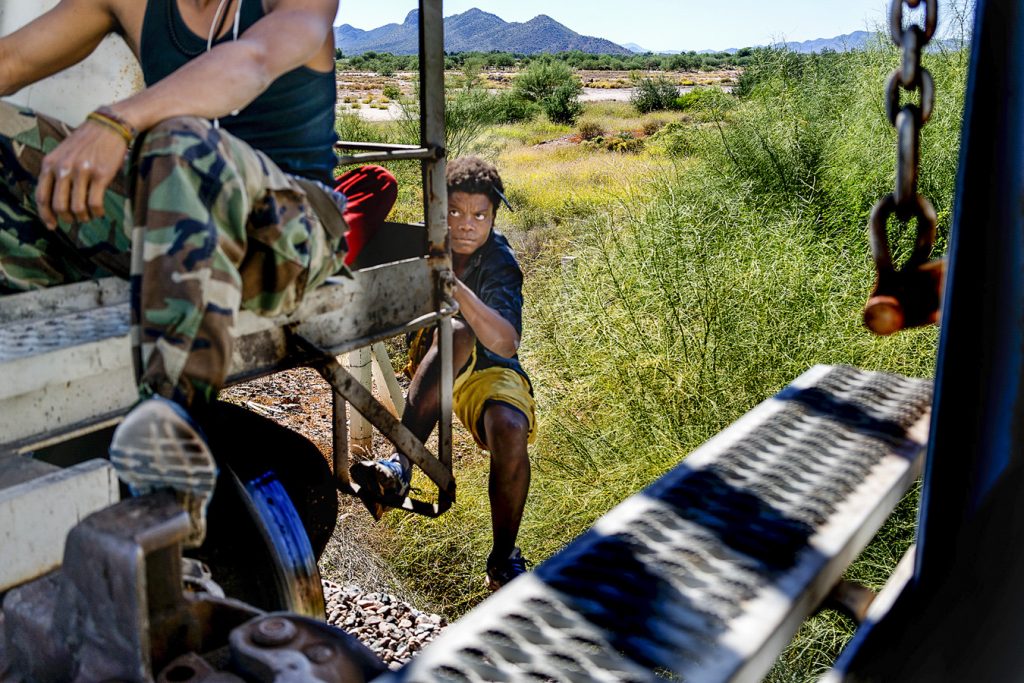 A Honduran migrant jumps aboard a moving freight train near Caborca, Sonora, Mexico, headed toward the U.S. border. Many migrants have lost limbs after falling from  freight trains, known as La Bestia, The Beast.  Nick Oza/Gannett

Recently Oza learned that he will be receiving a grant from the National Geographic Society to continue documenting immigration issues in the Americas, so – luckily for all of us – he will be able to persist in making photos that capture the spirit of truth.

We caught up with Oza to talk about his life, immigration, and what comes next.

So, Nick, where did you grow up?

I grew up in Mumbai. They used to call it Bombay.

And how long did you live in Mumbai?

So, thirty years here. What were your expectations when moving to the U.S.?

It was, for me, an opportunity. I knew I wanted to be a photographer, but my whole notion was to be a commercial photographer. When migrants come here, their focus is to be successful with money. That’s why they’re coming to a foreign land. But my professors changed my mind after seeing the way I interacted with my subject matter. And they said I had a gift of getting closer to people, and having people trust me, so I should go into documentary work and journalism. 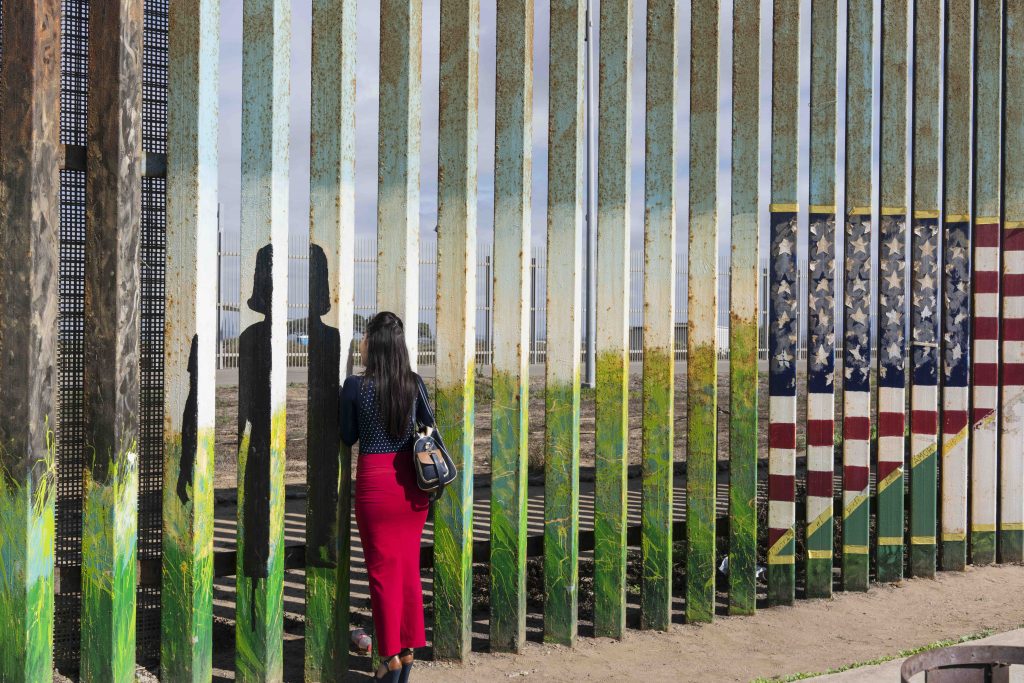 Was that anything you had previously thought about doing while growing up?

Honestly, I grew up being very shy, and people knew I didn’t like to talk much. Journalism just opened my mind on another level. As my work is maturing, I’m so grateful that the Arizona Republic editors gave me the opportunity to explore immigration issues.

So, in a way, photography is becoming a smaller segment for me, and storytelling is becoming the bigger picture. I spend tremendous hours and have a reputation for working nonstop. I work on sensitive issues like immigration, mental health, women’s issues, the opioid crisis, and all of that takes time to fully immerse yourself. You have to gain their [the subject matter of the images] trust. That’s why I spend more time talking, almost like a preacher; then the photography follows. Trust is a big thing.

So, if I’m hearing you correctly, you are pitching what you want to work on, as opposed to being sent on assignment.

Right. I do have general assignments, but yeah, a lot of times I pitch story ideas because I’m more out in the community with boots on the ground. Everybody’s a photographer nowadays because they have a cell phone, but you have to know aesthetics and understand the in-depth work of creating a story and, of course, finding the right subject matter. 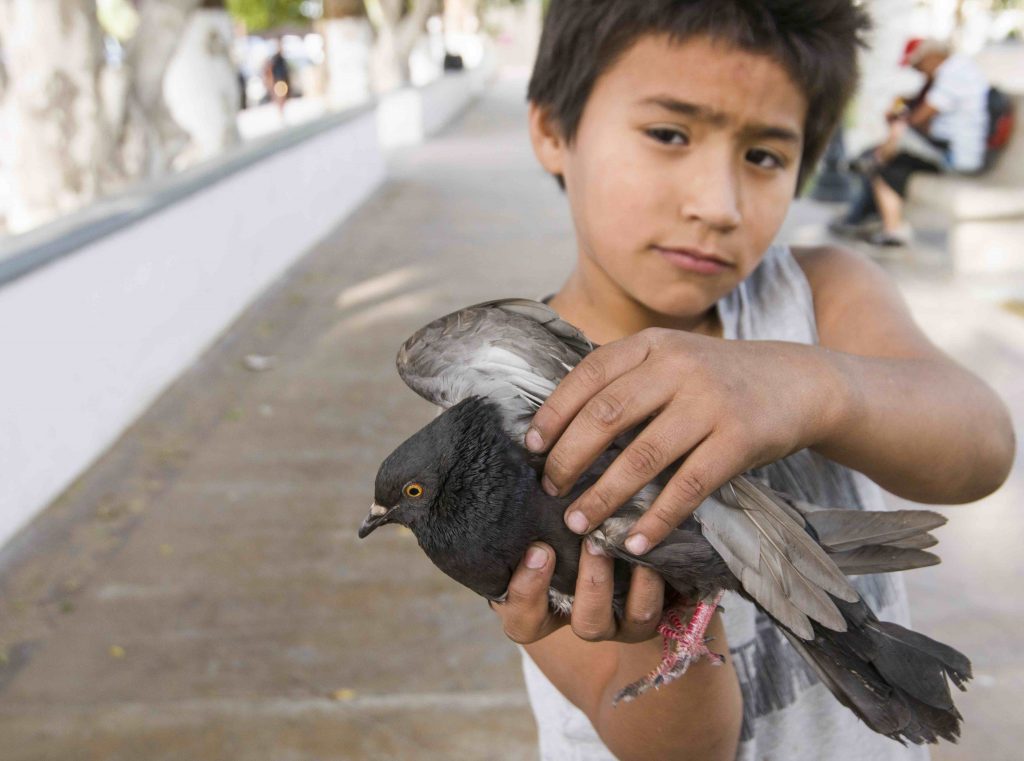 Kids play near a border park in Mexicali, the capital of Baja California. The city of 700,000 is located across from Calexico in the US, Nick Oza/Gannett

As part of the community with boots on the ground, when you’re here in Phoenix, where do you hang out? Do you go out and look for things, or let them find you?

Honestly, things seem to find me. The Indian philosopher Muktananda said: “If you’re a dancer, other dancers will follow you.” So if you truly understand yourself, things will come to you.

The biggest thing is learning the community, earning their respect. Then people will come to you with good story ideas. People know me by my successes, but success is based on previous failures. There were so many times people would just say no because they didn’t understand what kind of work I did. That was back in 2008, when I first started documenting immigration. But once people started knowing me, they would call me and say, “My uncle or my father just got deported.” Earning that trust was quite an honor.

Why do you think that is? Can you put your finger on what you did to go from being an outsider to someone that people trust with really personal and tough issues?

Well, their stories need to be told, that’s the main thing. I think that vulnerable people, once you have that trust, they become comfortable, and I become comfortable too. That is a formula that allows for amazing photographs. It’s all about understanding the people, the concepts, the story, and then everything clicks.

For an example, I did a piece on gangs in Phoenix, which was my first real attempt at storytelling. A lot of people would ask, “How did you get that shot?” and I was like, “I just explained my intentions to the family, and they saw I was showing respect, so they let me in.” I remember standing in a very deep corner trying not to be intrusive, and some family member said, “Hey, you should come on this side. This is the better angle.” When they said that, I had tears in my eyes because they understood me and why I was there. 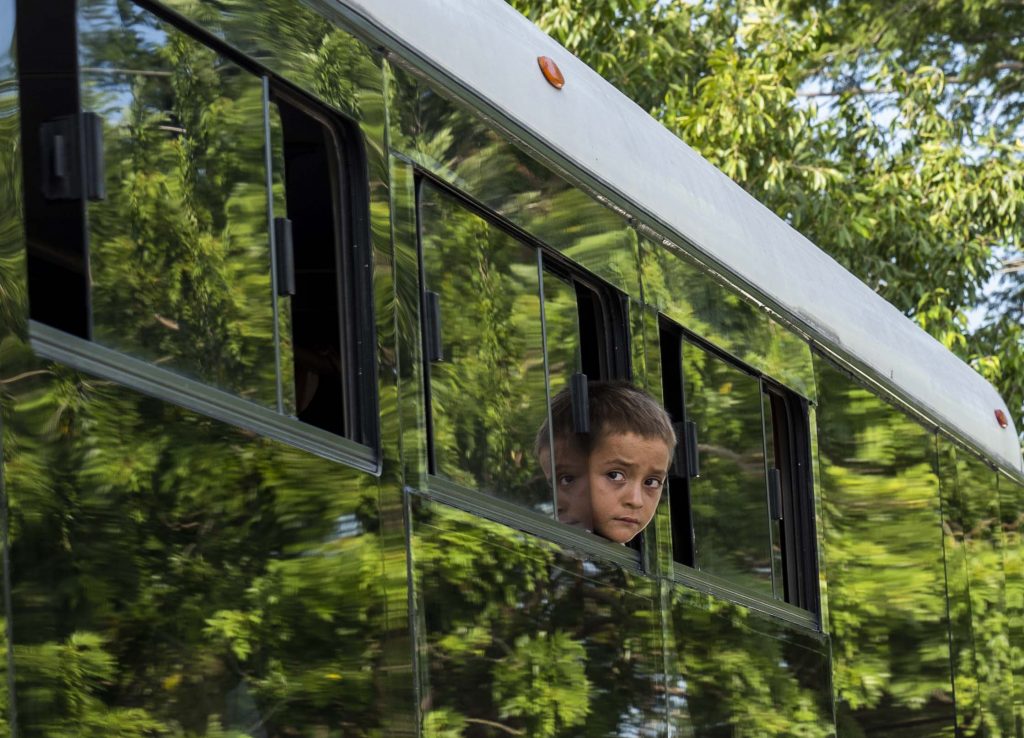 10/30/18: For the first time buses were used to transport migrant women and children arriving in Juchitan de Zaragoza. The president of the municipality converted a vacant bus station into a temporary shelter, offering the best conditions migrants had experienced so far. Volunteers set up huge water tanks for drinking, brushing teeth and even bathing. A truck arrived with boxes filled with snacks, water juice, and candy. Nick Oza/Gannett

You mentioned that you missed a great shot because it didn’t feel right to take the photo. Can you share a moment when you were compelled to put the camera down?

I was working on story about CPS [formerly Child Protective Services, now Department of Child Safety], and a caseworker was taking the kid away from the mother. The CPS worker was asking all the questions, and whether the kid was abused by one of the family members. It was such a heartbreaking moment, and the mother had allowed me into her house. She said, “I think I had so much trouble in my life and I’m just so fed up with it. I need to puke this out.” She went in the bathroom to throw up and I sat shaken, having seen all this firsthand, and never took a picture.

The second time she went to the bathroom I said, “I’m sorry to say this, but may I follow you?” And she was like, “That’s why you’re here.” That’s saying a lot. Whatever story I’m working on, whether someone likes the media or not, I want to show them that they’re beautiful, not just a face. I always want to show the beauty and humanity.

In some of the toughest possible situations, too…

Yes, yes. And covering this immigration issue, it takes a toll on your mind. You are hearing about atrocities – people that are fleeing because of gang violence, and women getting raped. I met two siblings coming to the U.S. The brother was fourteen, and he was able to stay. His sister was eighteen, so she got deported, and she was raped after going back.

The mother called to tell the brother what happened, and it was just too much to comprehend. People fleeing with nothing, leaving everything they know. Poor people, leaving their heart and soul, and they cannot go back because they’re fleeing danger and violence. 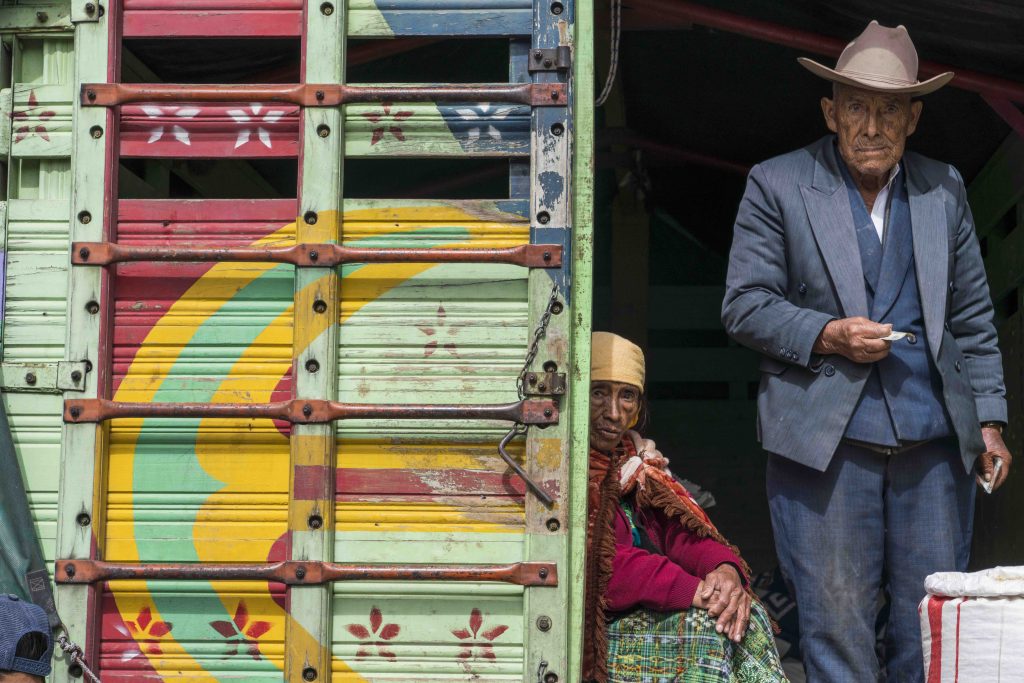 Native Guatemalans sell grain and corn in the market. Guatemalan laborers makes an average of $8 a day. Nick Oza/Gannett

Being from Mumbai, how has your own immigration experience impacted the work you’ve done?

I understand better than most, not because I relate to their specific issues, but I understand the concept and what it takes. I came here to study, so the circumstances were different. Maybe the community opens up because of my ethnicity. I’m not sure. A lot of times I feel like a cat. I go and people are so nice, and I do my work. Once you build the trust and communication, you can do much better work.

It feels like we live in a pretty interesting time, from a journalistic standpoint.

Yes, chaos. And I’m sorry to say it, but chaos creates opportunities. It’s a tough time for journalists. Things have gone so extreme on both sides, but I just want to communicate that these are the facts, this is what is happening. 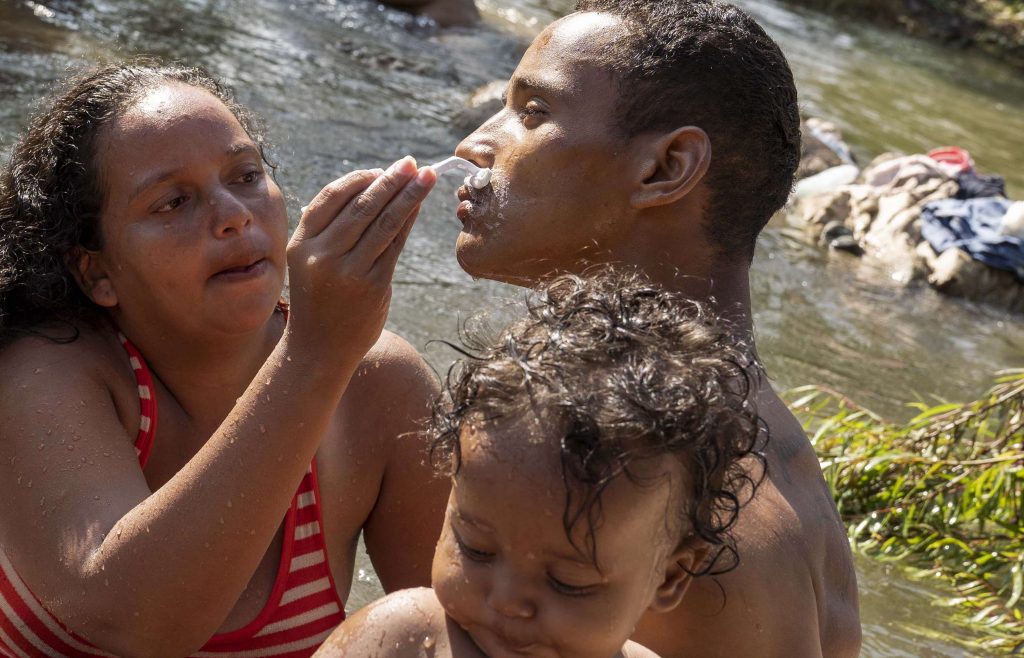 10/28/18: Maria Estrada shaves her husband Alex while they bathe in a river with other migrants. The caravan took a day of rest after a Guatemalan migrant was attacked by migrants from El Salvador who mistook the man for a kidnapper – a sign of rising tensions as the caravan inches forward. They have walked more than 180 miles since pushing through a gate into Mexico on Oct. 20, and have reached the state of Oaxaca after passing through Chiapas. But they are still more than 2,300 miles from Tijuana, the caravan’s final destination. Nick Oza/Gannett

We are living in the age of social media. Traditional media is having a hard time keeping up. Everybody wants to be first, without fact checking. I’d rather be good than first. First is not my priority and neither are the awards, though I do have bragging rights. I would rather leave the awards for athletes because that’s what they do. Everything is about competition, but in journalism, you shouldn’t think about competing. Journalists should focus on an effective way of storytelling with the facts.

What do you think is going to happen in the next decade in terms of how journalism exists?

We are living in an evolving society. Everything changes, but good journalism and good storytelling will always exist. You can see forty or fifty photojournalists’ work in one place, but everybody has a unique way of seeing. I have my own vision, and nobody can take it away. I know some amazing photographers who have done great work, even pocket cameras. They are visionaries and poets of storytelling. That’s what I aim to be. 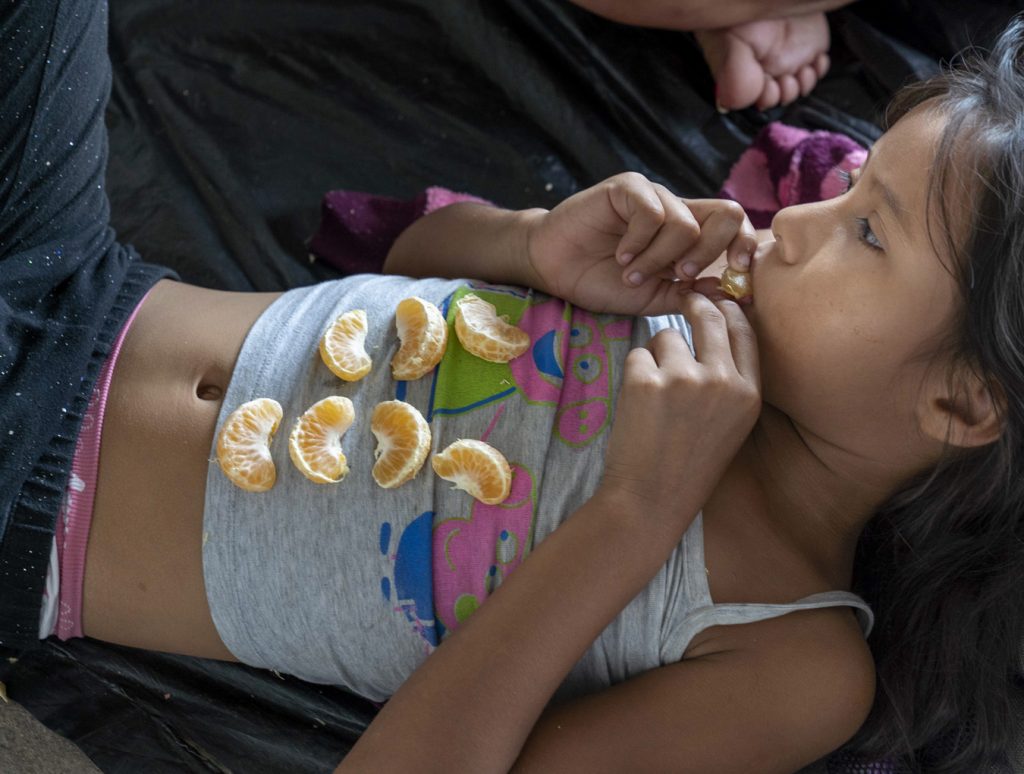 10/29/18: Alexandra Paisano Perez, 8, from Honduras eats an orange given by humanitrain volunteers in Santiago Niltepec in the state of Oaxaca. Many of the children are experiencing illness from heat exhaustion. Nick Oza/Gannett