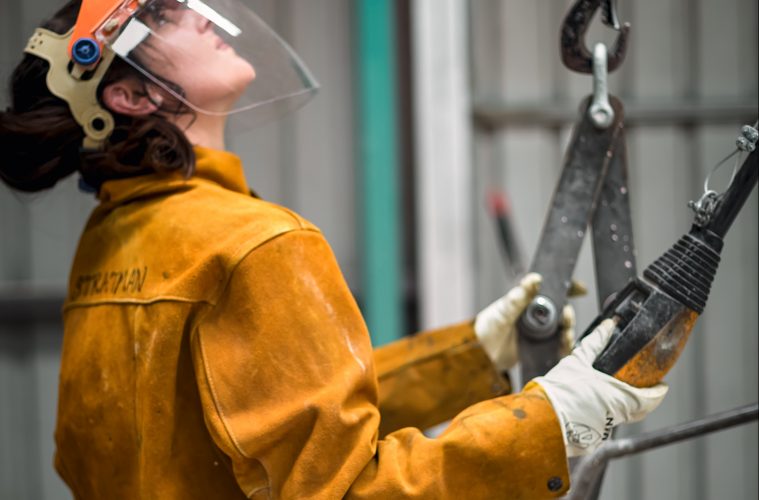 “I liken it to the death of a star, which relates to molten metal being instantly cooled,” Jennyfer Stratman explains to me over a picnic on a farm in South Phoenix where she lives part of the year. “I throw the molten metal on the ground and it instantly cools into these crazy shapes, very similar to a star exploding.”

Stratman’s artistic vision is cosmic in scale yet personal in nature, obsessed with the interconnectivity of all things. “Then, over time, the gravity pulls all these bits and pieces back into a sphere and the whole thing starts again. It’s birth, transformation, death, renewal and the cycle of life, which is similar to my previous work with more plant motifs.” 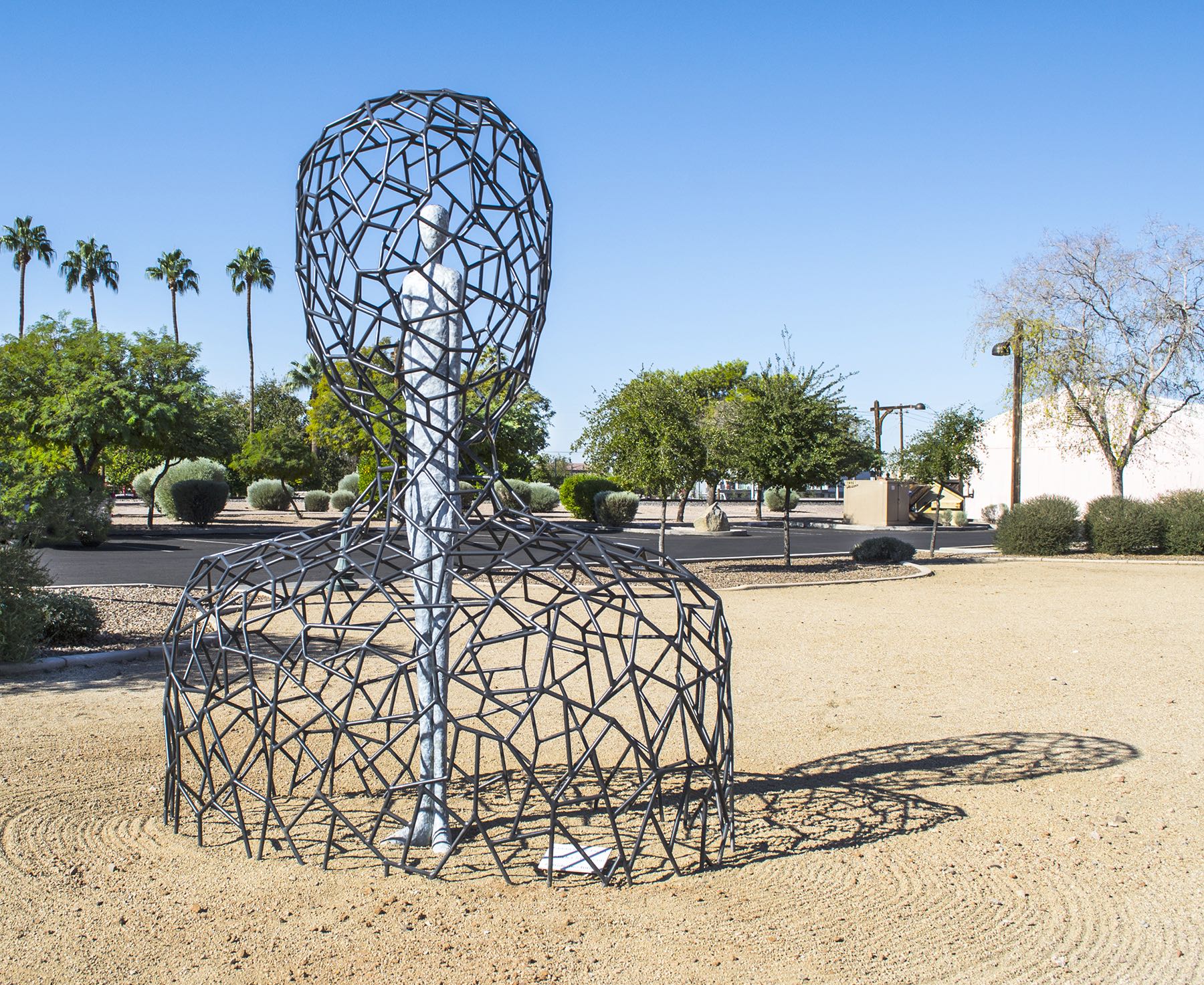 Take, for example, her large-scale piece “Connection Point,” which is located in Gilbert. A human form from the chest up, made out of an irregular lattice, emerges from the ground. Contained within it is one of Stratman’s slender human figures. While she explained the work is about the nexus of inner and outer universes, it also seems to explore the loneliness and solipsism that defines contemporary American life. The inner figure seems trapped within a prison cell in the form of a person.

Another example is Stratman’s hexagonal bicycle rack design, reminiscent of a honeycomb, and one of two prototypes unveiled recently at “Pedal to the Medal: PHX Bike Rack Project and Art Show.” In collaboration with Downtown Phoenix Inc., Artlink, the City of Phoenix’s Street Transportation Department and Office of Arts and Culture, the project will see 25 of Stratman’s bike racks installed around Phoenix.

“I actually came up with the visual as I was laying in bed one night,” Stratman recalled. “The idea was of bike hives and how bicyclists commingle and do these rides together from place to place, like swarms of bees pollinating different areas.”

A sculptor working primarily in bronze, though she uses other metals and materials as well, Stratman crafts work in a number of different styles, drawing heavily from a pool of ideas she has explored since at least as early as high school. 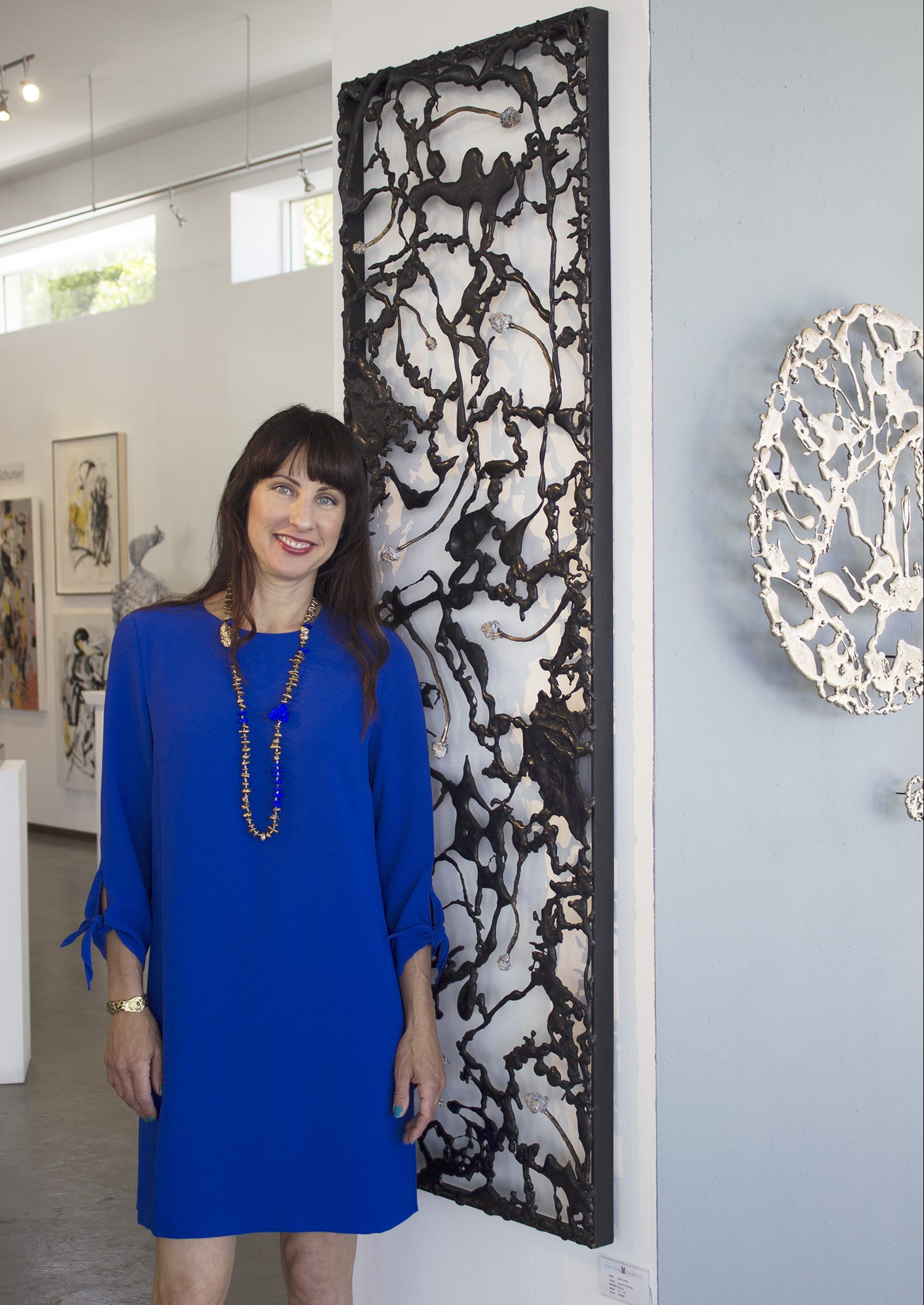 “I’ve been painting the solar system since I was 16,” Stratman said. “Even the tattoo I got when I was 18 years old, I drew while I was still in high school.” Her tattoo consists of celestial objects, both in our solar system and beyond, snaking their way from the top of her foot up her calf.

Stratman’s creative drive emerged even earlier than this, though. “As a child, my mom could put a piece of paper and a pencil in front of me and just shut me up,” she began to explain – until interrupted by a male Arabian horse named Bubba, one of the three horses she shares the farm with, braying loudly and rattling the wrought iron fence between us.

Stratman assures me the horse’s bravado is just his way of asking for carrots. She momentarily steps away from her 28-year-old pet iguana, Cosmo, to whom she was feeding leaves beneath a towering old pine tree. After Stratman dispenses a number of carrots, the other two horses, Willow and Amber, wander over to get in on the action. Then Stratman returns to her youthful reminiscences alongside her loving lizard. The scene is like a Wyeth painting on acid.

“The first sculpture I made was when I was three,” Stratman said. “I actually remember making it, strangely enough. I think it was in the newspaper, which is even weirder, but it’s this little clay dinosaur-looking thing with these little jewels.”

Stratman’s mother was a photographer and her father was an aerospace engineer who worked for Motorola and NASA. She started getting more serious about art in high school, where her favorite classes were ceramics, jewelry making and Earth science. 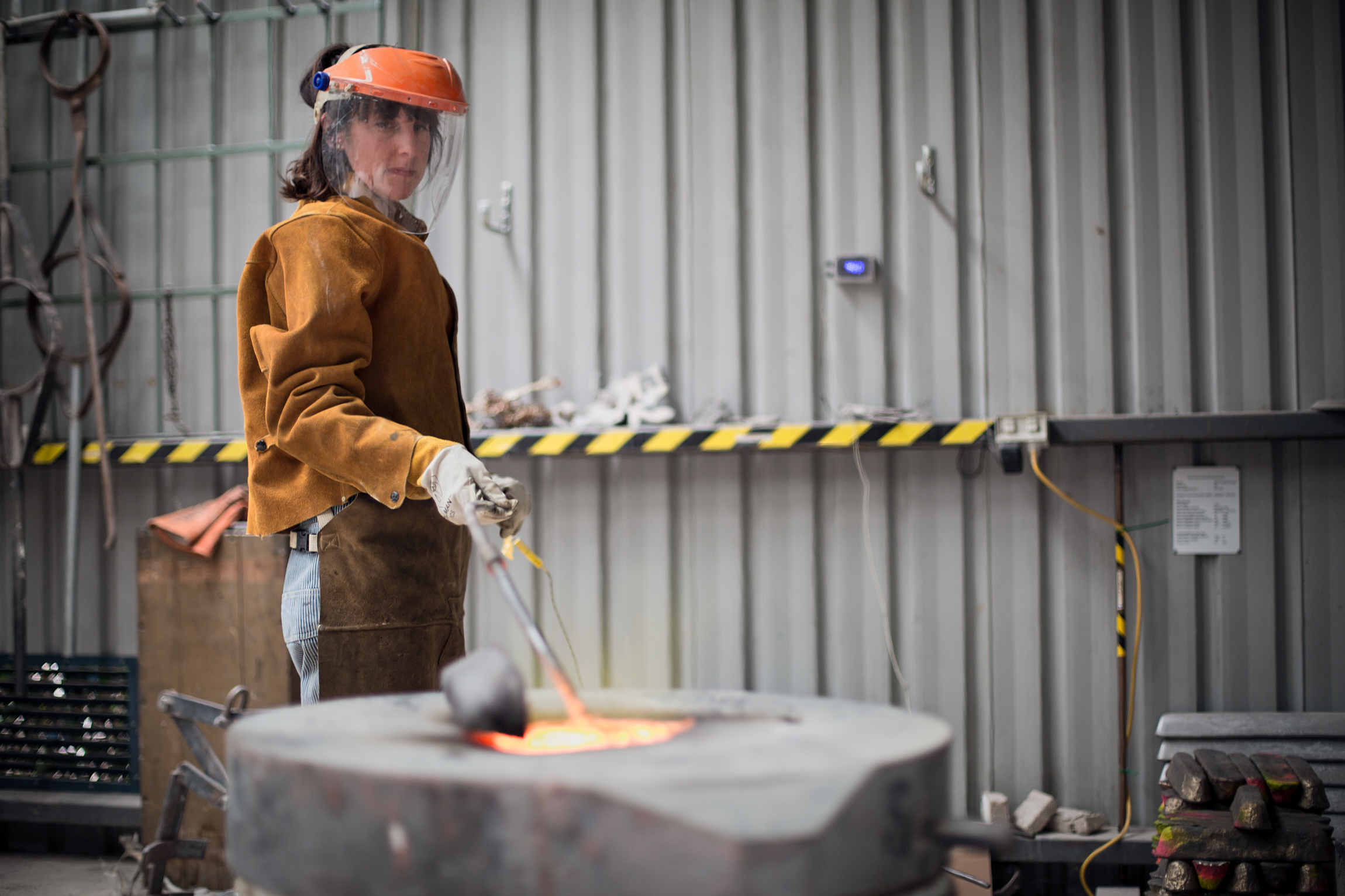 “I could see why I was interested in those particular subjects,” Stratman said. “As I grew into being an artist, the conceptual side of what I do is based on science, the Earth and cosmic connectedness. And then obviously there is the art side of it.”

She continued to pursue these interests at ASU, where she majored in fine art and art education and continued to work in ceramics until her vision proved more elastic than her medium. “I was moving in a more sculptural direction,” Stratman explained, “trying to cast these very tall elongated forms. But I only had various degrees of success because they would often break in the kiln or after. Later, when I was installing them, it got a little bit frustrating, and one of my professors suggested that I go up to the foundry.”

Stratman admits that at first the foundry was somewhat intimidating. She was unfamiliar with all the tools, the specialized terminology and the extreme conditions. At the time, she didn’t even know what a crucible (a container that holds molten metal) was. Whatever initial misgivings she may have had about the macho environment were soon overcome by a love for the process. She quickly learned the tools and began mastering the techniques.

Discovering how things are made proved empowering for Stratman, and it gave her a heightened appreciation for the built environment. She started seeing things that before had been invisible. All the while, she continued to refine her conceptual approach while experimenting with a range of styles and motifs.

“I was doing a lot of hands and different body parts, even vaginas. I had a very feminist approach to my work in college,” Stratman said. “It was probably also a reflection of the times, in the early ’90s.”

“The figurative work came in the mid 2000s, which is really funny because I was much more abstract and conceptual in college and I never thought I’d move in that direction. Toward the end of my college years, I steered away from the more conceptual because it just didn’t bring me a lot of joy.” 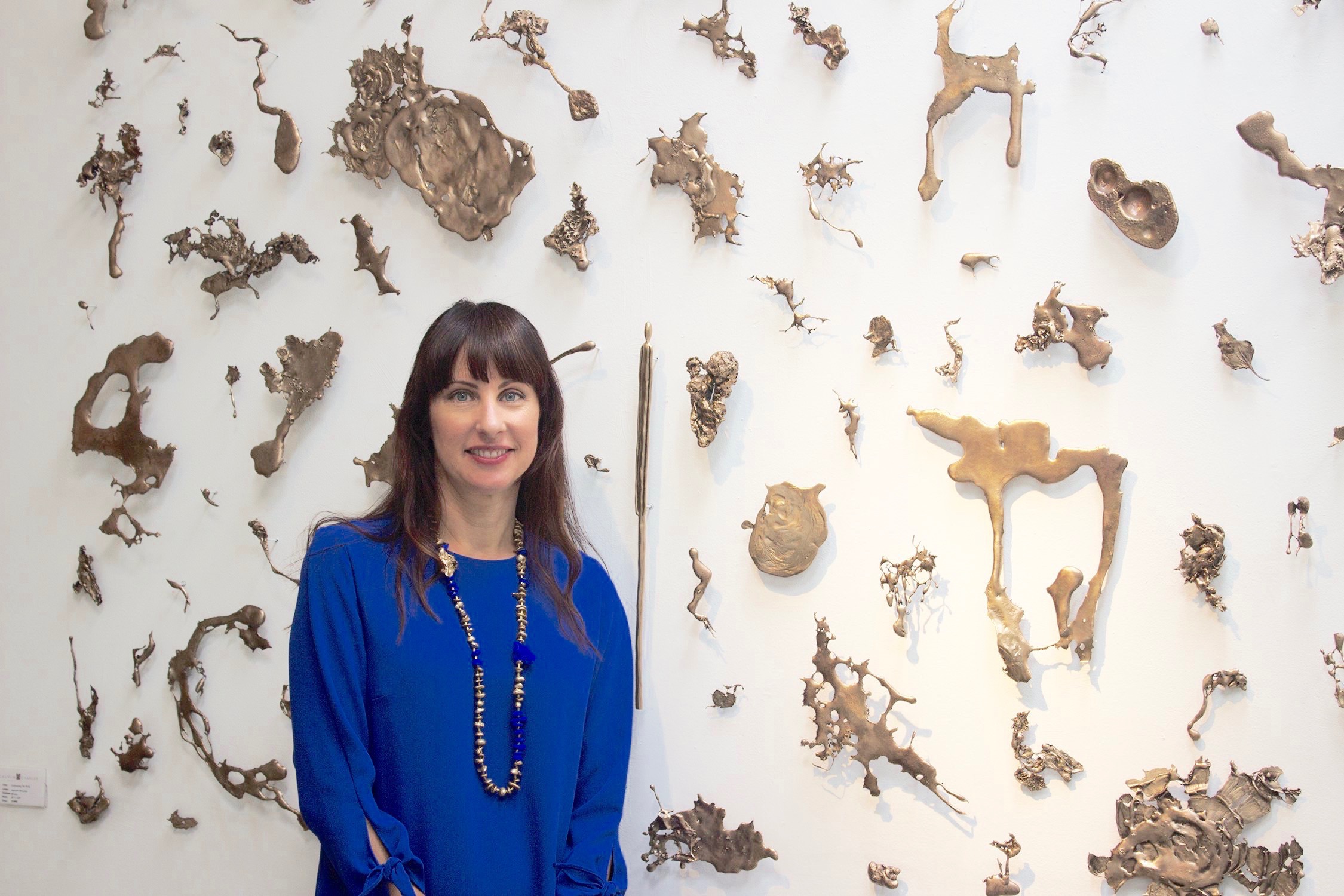 “I had a commission to do a piece with hands coming from a tree root. It was all about connecting with humanity and the earth. In a previous piece the client had seen, I had put buildings on one hand and a hole in the other hand, a kind of symbolic raping the earth. He wasn’t interested in that.”

“I thought, what if I put little figures on the hands, like there’s the single figure on one hand, which kind of represented me, and then it came down into this root system and the other hand had a series of figures on it.”

The crowded palm of the other hand represented her community and homeland. The figures were meant to be genderless and faceless, the essence of bodies. In time, these figurative elements would become something like her signature.

“It was my way of connecting the other bits of my work, the more nature-based or cosmic stuff, into humanity,” Stratman said. “I am very interested in those archetypical shapes found in nature. It could be from when you look under a microscope and see cellular structures and then you look out into the cosmos and you see similar patterns.”

“Or the veins in our bodies. Tree roots. You could liken it to so many things. I remember early on, when I was doing more feminist work and was in Monterey. I was watching the seaweed wash up on the beach and those pods were shaped like breasts. I just started casting them and referencing that.”

“I have a succulent garden in Australia, so I’ve got a myriad of plant forms,” Stratman said. “At certain times of the year, when things are flowering, I’ll cut those off and dip them in wax, which sort of freezes their form, though not always successfully.”

Stratman walked me through her process. She begins by dipping an original object, a flower or root, for example, in wax. Next, the wax forms are dipped into ceramic shell slurry and dusted with sand, which picks up the details of the wax mold to an astonishing degree.

“It’ll even take fingerprints,” explained John Tuomisto-Bell, another artist and sculptor, who helps Stratman cast her works at a foundry located in the backyard of his Phoenix residence.

Once a sufficient number of layers of ceramic shell and sand have been built up, the molds are placed into a burnout kiln, where the wax is removed, leaving a hollow form holding the original shape. Molten bronze is poured into this, and once it cools, the fun work of removing the ceramic shell begins.

“Some of this stuff just pops off, but the rest is taken off with jackhammers and sledgehammers,” Tuomisto-Bell explained. “That becomes the real work.” 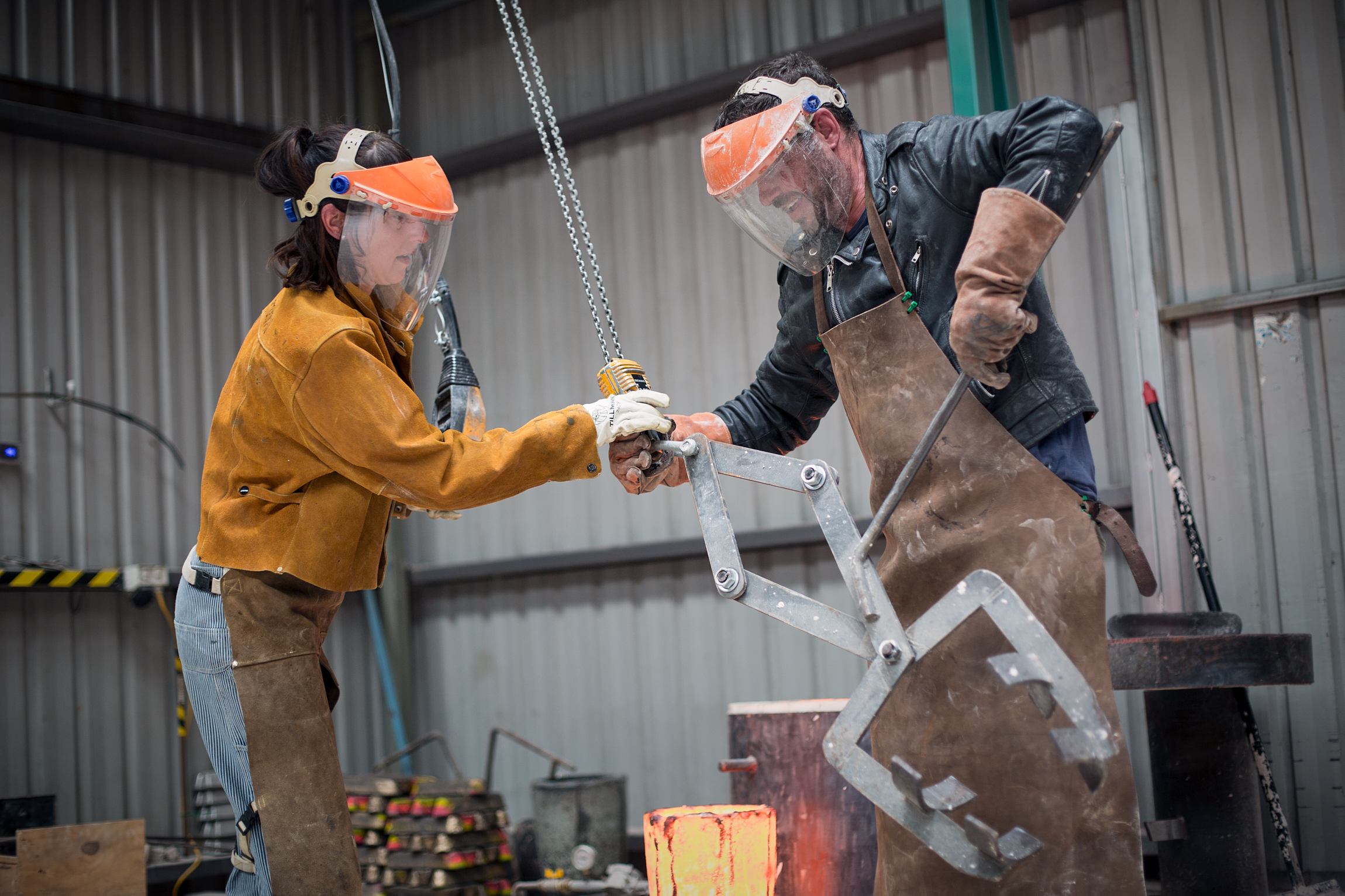 The artists explained the process as they loaded old sprues into a crucible. Sprues are a waste product formed when metal cools in the various feeder channels that molten bronze is poured into. When casting, they use a mixture of old sprues and fresh bronze. It takes roughly 45 minutes to an hour for the metal to melt, slowly slumping into the red-hot crucible. The furnace roars like a small jet engine as flames, mostly invisible in the afternoon sun, reach up like the branches of one of Stratman’s works.

Stratman’s pieces are as varied as her zip codes. Her strong artistic vision and well-honed production skills have ensured not only her continuing success as an artist, both commercially and critically, but perhaps have also granted her (much like the roots and flowers she transmutes) some measure of immortality.

“The whole process of getting these base materials from the earth and then creating an alloy that you can melt and mutate is similar to the cycle of birth, death and transformation,” Stratman said. “This stuff formed in the earth millions of years ago. Then we dig it up and repurpose it. Who knows, my sculptures may last for a very long time, until the sun gets closer and it all melts away and perhaps reforms into something else.” 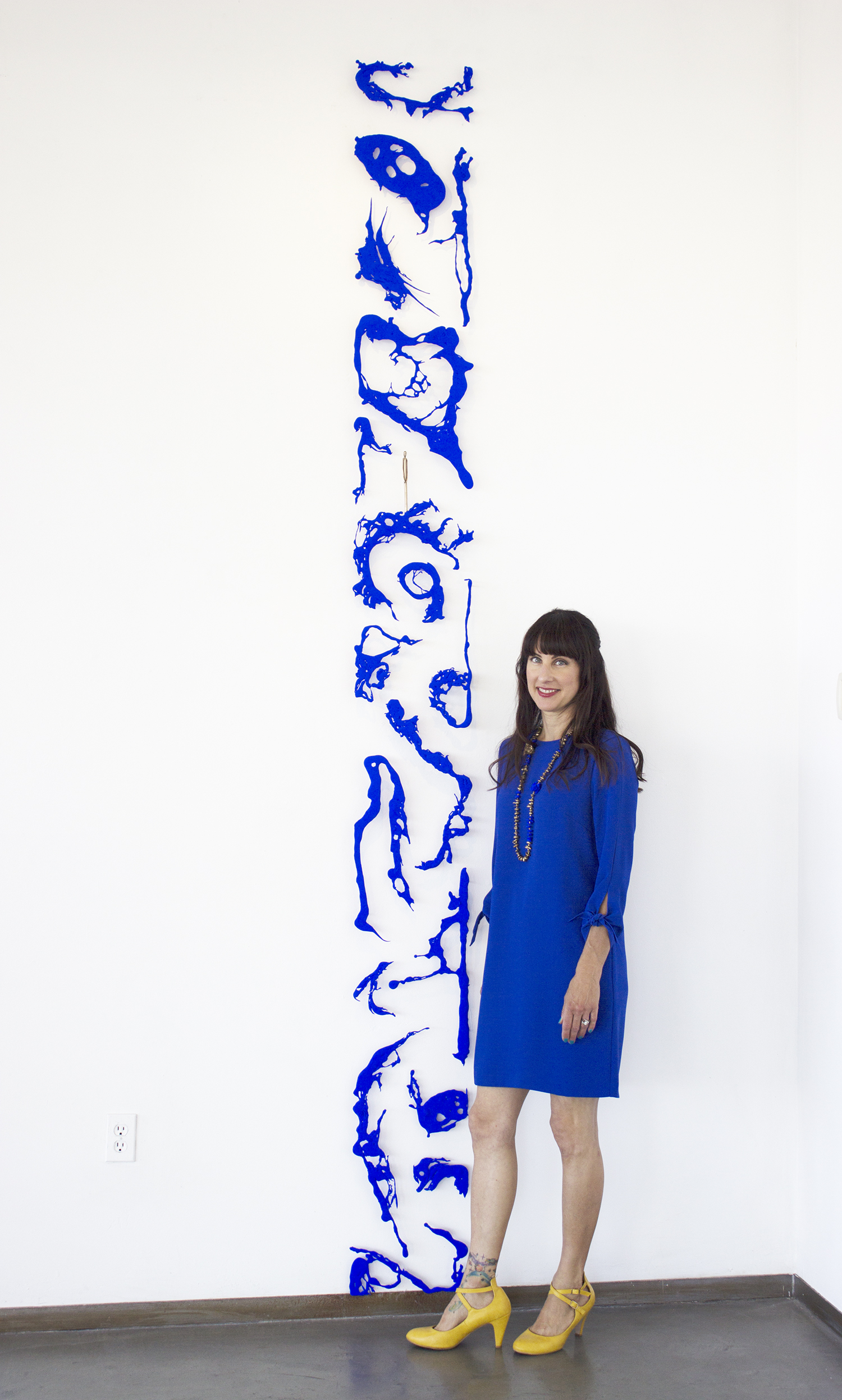