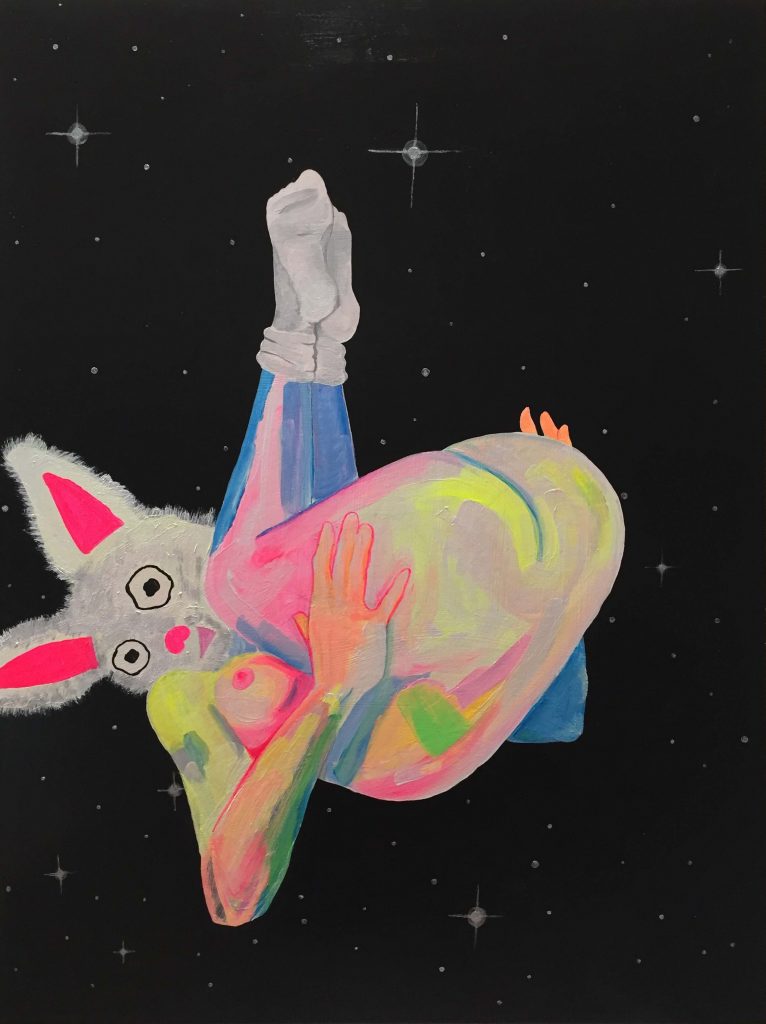 Psychiatrists explain that many of our emotional responses are tied to electrical impulses firing off in our brains. That’s why horror films set your heart racing or you feel tightness in your chest as your airplane begins its descent. Even the illusion of falling in love creates a physical reaction. But psych professionals blame another internal deviant when things start to go wrong. That culprit is chemistry.

Yes, the chemicals in your brain can go wrong. And when they do, the results can be disastrous. Fortunately for modern humankind, just like a virus-scan on a PC can pinpoint and fix a problem, so can modern-day apothecaries. The answer is often a simple little pill. This pill will set your chemicals right, and you’ll feel better—less sad, less disturbed, less delusional, less disoriented. But it comes with a catch: you may grow to rely on the pill every single day, for the rest of your life.

Oakland-based artist Kellesimone Waits takes a different approach to unpacking and examining the strange modern-day tendency to turn to chemical adjustments to “feel better,” with the story behind her new series of paintings, Astrobunnies: The Visitation. 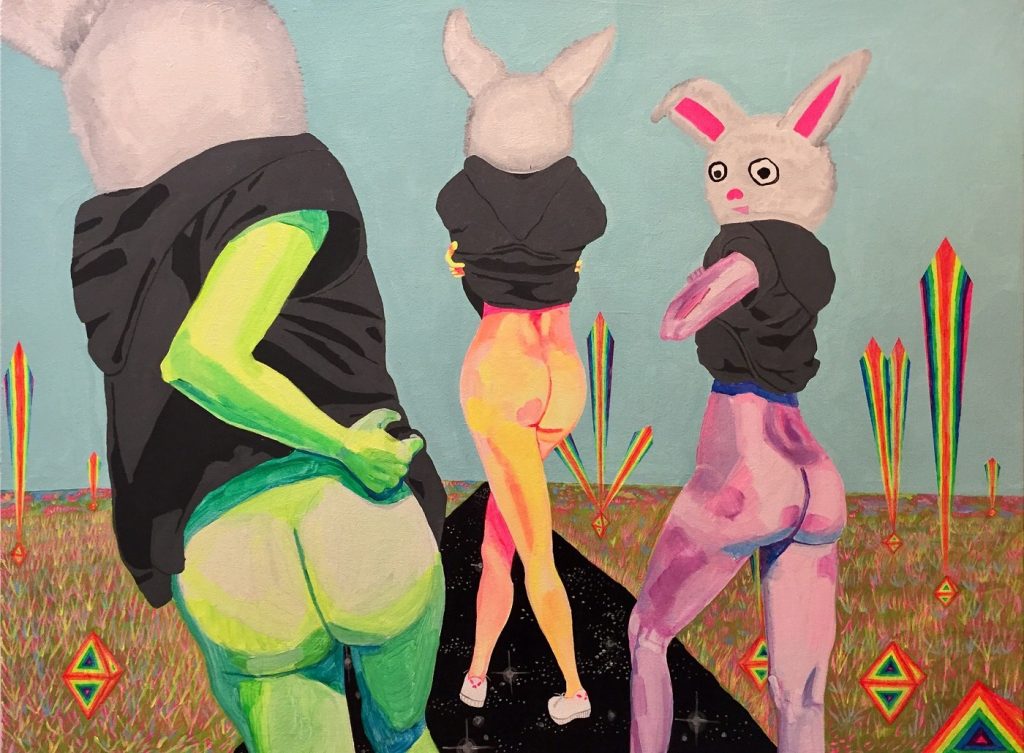 Waits enjoys merging the human female form with a chimerical, absurdist bunny head. But it’s not that the women in these pictures are just playfully donning a mask. The Astrobunnies are transient aliens from outer space, Waits explains. They travel around the cosmos and eventually select planets to explore. They have chosen Earth to check out next. “They are parasitic creatures from outer space,” Waits explains over the phone. “They travel around in these rainbow light pods.”

In addition to being homeless space vagrants, they also need host bodies to occupy. And they really like humans. “They crawl up our bodies and consume our heads,” Waits continues in a plain, matter-of-fact tone. “They don’t have feelings of their own. By consuming us, they feel what we feel, and they feed off our more negative feelings.”

During this transformative process of the Astrobunnies inhabiting us, physical changes begin to manifest. For example, Astrobunnies can make the physical bodies of their hosts—no matter if they are men, women or children—into the sexy bodies of adult females (they believe everyone looks better as a lady, Waits explains). Our head turns into their homogeneous bunny head. While they are feeding off our negative feelings—our fears, loathing, sadness and hate—they are dumping their own chemical byproducts into our bloodstream, Waits explains. “They leave a trail of this black goo behind them. They gobble our heads and then replace them.”

The chemicals they leave behind are euphoric for humans. They make us feel sexy and blissed-out, Waits says; they make us feel high. We become addicted to Astrobunny residue and run-off. “We are left in this sexy but passive state,” she says. “We get turned into these sex bunnies. But if they leave us, we will die.”

Waits says she was inspired to paint the highly infectious bunny-head by a mask she created a few years ago. It’s a simple, funny headpiece that she made for some videos, with pink fur, slightly crumpled ears and widely spaced, unblinking eyes. She says she kept looking at it, packing it with her on various moves, and eventually keeping it close in the studio while she worked. “I became sort of obsessed with it,” she says. It was only natural it would eventually find its way into her paintings.

The Astrobunnies series isn’t about animalizing women, but more about obscuring identity by using the animal heads. It’s not something new for Waits’ work; she had another series a few years ago where she painted human bodies with the heads and other attributes of animals. But that series was more connected with myth and steeped in folklore, she explains.

Waits also very much likes drawing and painting women’s bodies, because that’s what she relates most deeply to from her own experience. She uses art to address issues of femininity and transformation. “I really like Francis Bacon and Marlene Dumas,” she says. “I used to be more ‘drippy.’ Not so much anymore.”

About the Astrobunnies, Waits says, “It’s a fun story and I love it, but it’s also a way to talk about other things, like chemical intervention,” adding, “I think my work is personal. And I think it ought to be that way. I don’t want to make work about something I’m not connected to.” 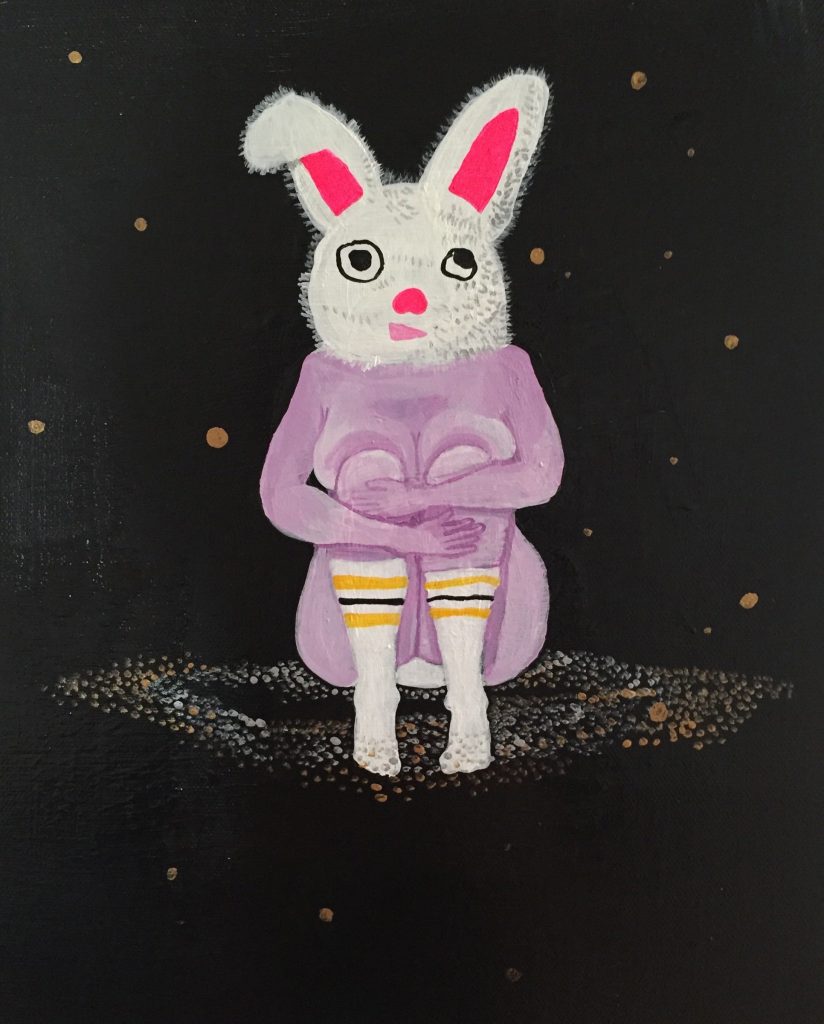 Also finding their way into this series are representations of the starry night sky, rainbows, and illuminated cacti from the Fort Bragg/Mendocino County area. Waits says that as a child she remembers staring at her Rainbow Brite bed sheets quite often. That may feed into some of the rainbow allusions in the paintings, or inform their hypercolor palette, even though Waits says there was never much television watching in her childhood home. She says the Astrobunnies “radiate a lot of the time. The rainbows symbolize that bliss and sometimes the orgasmic feelings that we get from their chemicals being dumped into our bodies.”

Astrobunnies: The Visitation
Through May 21
Tieken Gallery
For viewing times and information email fred@fredtieken.com