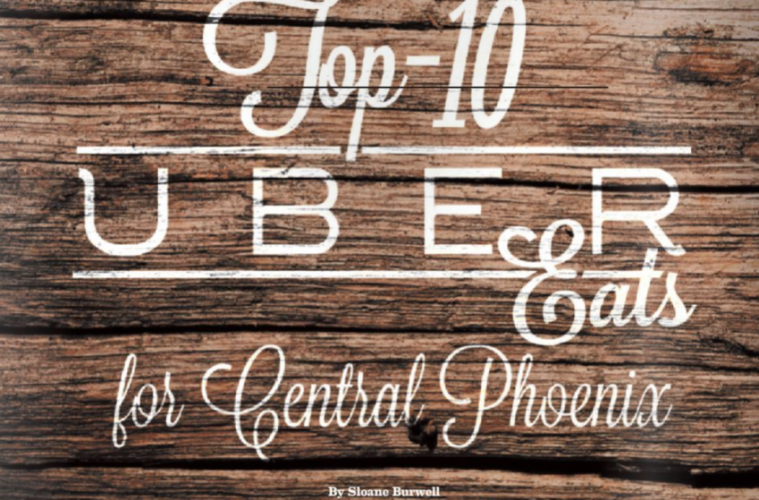 Perhaps the most decadently delicious part of urban living is food delivery. Any number of online sites let even the most anti-social among us order without talking to anyone. Uber Eats makes that even easier with their app, as they’ve now joined the multi-billion-dollar food delivery business.

Uber disrupted the transportation game, so the question is, can they do the same with food delivery? Maybe. Sometimes the answer seems to be, absolutely. And sometimes, not even close. 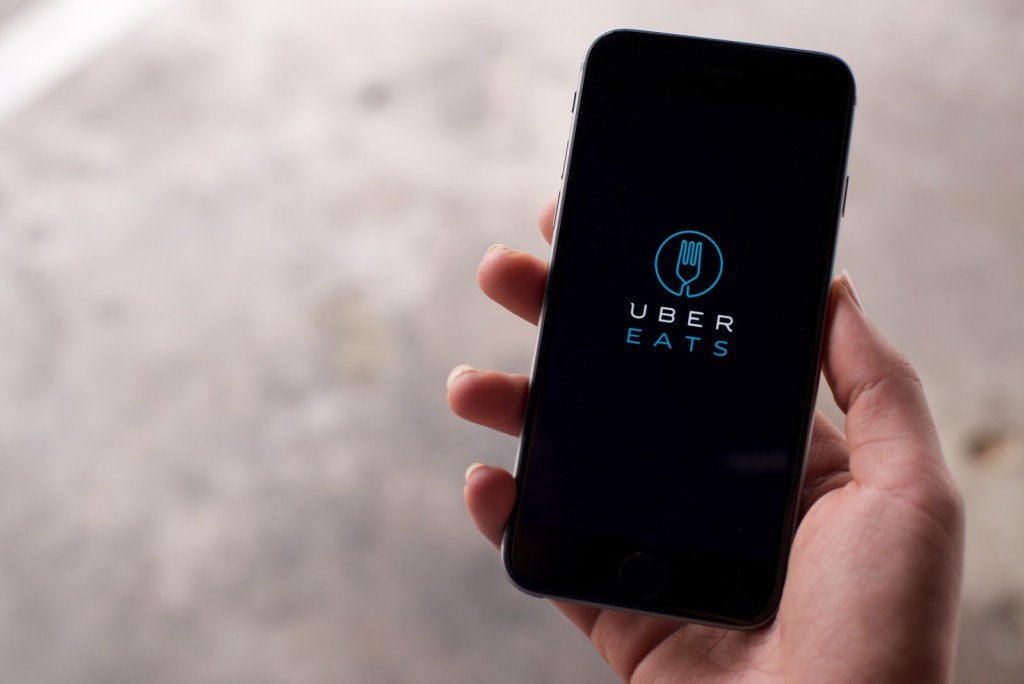 I’m almost embarrassed to say how soon I jumped on the Uber Eats bandwagon. At this point, I’m giving up my amateur status to go pro. Here’s my guide to enjoying the ride and my take on Uber Eats Top 10 options in Central Phoenix.

Delivery chow is hardly new. Nary a sports fan, slacker or, dare I say, 420 aficionado exists on earth who has not ordered delivery. Where Uber Eats attempts to impress is in its culinary credentials. This isn’t Domino’s, or even merely pizza. Second-wave food delivery attempts to literally drive fine dining to your living room.

Does it travel well, and is it worth it? I might have had a different answer as a consumer before Uber Eats added a $3.99 delivery charge on August 12. Hopefully this upcharge benefits the restaurants, who were previously charged 30% per order (yowza!). As a consumer, I’m still on the fence.

The drivers are generally nice, and they drive newer cars than your average pizza delivery person. They are also more inclined to call to find your house. That happens to me most of the time. It’s worth noting that a pizza delivery person has never called to find out where I live.

One last thing before the Top 10: Pizza joints have had decades to perfect their space-age delivery bags to keep food warm and not soggy. Uber Eats provides drivers with profoundly mediocre thermal bags with less insulation than my reusable lunch bag. That is IF the driver uses them. Most often, they don’t. How do I know? The bags are impossibly small and only fit one order. The driver will inevitably bring them to the door so I can pull out my order. 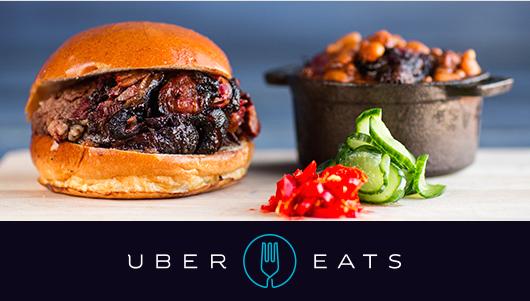 And at the risk of being accused of blasphemy, several top Phoenix spots didn’t make my list. Crudo, I love you, but it’s far too hot for raw fish to be driven to anyone’s house, especially given Uber Eats’ poor-quality insulation. And some legendary dishes travel so poorly that I’d prefer you save your money (so sorry, Ramen Burger!). With that aside, here we go:

1. The Larder + the Delta: Their cauliflower take on buffalo wings is amazing and makes me happy to be alive. The portion is larger than if you order in house, which is reflected in the price difference ($8 vs. $6). The crispy pig’s ears ($8) travel well, but the toast/bread/bruschetta doesn’t fare as well. It’s too hot for the burrata to travel right now, so wait until fall. Also, they don’t always keep their posted hours, which almost dropped them to #2. That cauliflower, though.

2. Tacos Chiwas: The most talked-about taco parlor in town brings $3 lengua tacos (and burros) to my front door? YES PLEASE. They travel well, and are often delivered faster than waiting during lunch rush.

3. Paz Cantina: The best Mexican side dishes on Uber Eats (YES, Street Corn! $5). Don’t miss the Tinga Taco ($3.50). Bacon isn’t listed as an ingredient in the Fried Brussels & Crispy Kale—bonus for me, but not for vegetarians.

4. Okra: Fried Chicken Skins ($7)? These are so decadent it almost feels like a sin, eating them at home alone. The Grilled Broccolini with Almond Pesto & Egg ($8) was a successful risk. A cracked egg in the summer? Thankfully it arrived still runny, having traveled well. Love the smoky grill flavor.

5. Armadillo Grill: Sometimes you just need chicken wings. These are my pick as the best wings on Uber Eats, and at $8.95 they almost feel like a bargain. Sauce them up your way, but I prefer the classics. If there are meatier, higher-quality wings on Uber Eats, I haven’t found them.

6. Pork on a Fork: Excellent brisket and pulled pork, with sides that are no mere afterthought. These guys spend money on their to-go packaging. I’m still using mine after at least 10 times through the dishwasher. The baked beans come loaded with burnt ends from the brisket, and one of my friends thinks their potato salad is the best in town.

7. Thai Long-an: $7.95 gets one of the best Pad Thais in town delivered to your door in 30 minutes, with a great egg roll. Please note, their stripped-down menu is spiced down. Make sure when your order you up the spice game, because the standard takeout Pad Thai borders on sweet. The portion is slightly smaller than their in-location version ($10.95), but is a fair value.

8. Sweet Republic: Brownie Sundae to your door for $7.50. They basically dropped the mic. There is nothing more I can say. Except $18 gets you four ice cream sandwiches.

9. Forno 301: Because sometimes you need a pizza. Hands down the best pizza on Uber Eats is the Quattro Formaggi Blanca ($12), with four amazing white cheeses, fresh from a wood-fired oven. It’s what every chain pizza delivery wishes they could be. Also excellent salads. However, Uber Eats needs to provide pizza bags. It’s summer and they don’t need the heat now, but there is no reason for food delivery people (especially working for such a tech-heavy company as Uber Eats) to have such poor tools.

10. Short Leash Hotdogs: Unlike some burgers that I’ve tried, their naan-wrapped dogs travel very well. However, Short Leash needs to up their game. Both my orders came in open-topped paper boats. As in no cover—no paper, no tin foil, no nothing. I’m trusting that the driver didn’t turn a corner and my hot dogs rolled onto the floor, but this isn’t good. That aside, those Fried Pickles ($3) travel well, and pair perfectly with the Igby ($6.50), a dog with coleslaw, bbq sauce and blue cheese. Live a little and get the Cinnamon Gigante ($6), a fabulous cinnamon roll the size of your head.

For the most part, I’m a fan of Uber Eats. Most of the time they get it right. But when they fail—watch out. One order literally never showed up. The restaurant cared, a lot in fact; one of the employees was ready to personally drive to my house. Uber Eats? Well, it was 5:01 on a Friday, and they were closed until Monday. That’s an issue if you have a customer service request for something you pre-paid for. It’s faster to dispute something with your credit card. Uber Eats would do well to remember that.

Clearly, some food does better in our summer heat. Packaging will be an issue at some point. But the business model is fluid—there have already been changes in the pricing model. I’m sure that is all part of being a disruptor. And I’m sure once the seasons change a whole new world of delivery options will appear, as new restaurants join in. I’m almost counting down the days until it’s cool enough (for me) to order crudo from Crudo.