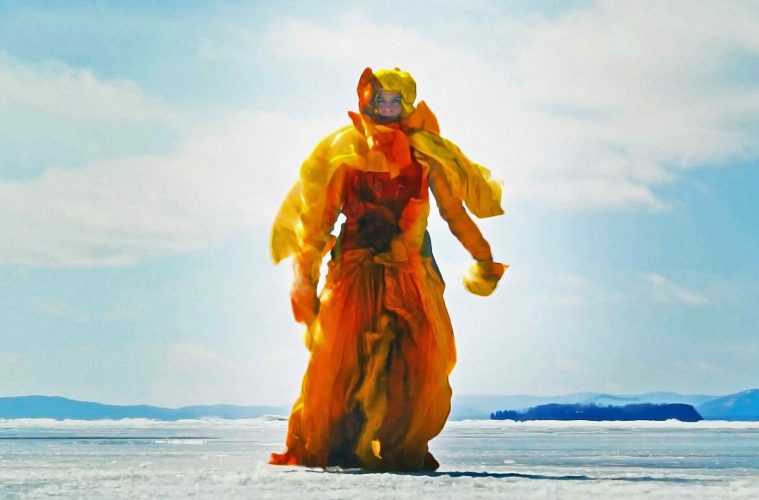 The exhibition Counter-Landscapes: Performative Actions from the 1970s–Now at SMoCA is both a curatorial and an artistic triumph. It celebrates the work of three generations of the most important performance artists, including the likes of Marina Abramović, Francis Alÿs, VALIE EXPORT, and Adrian Piper, to name a few. The breadth of the artists selected by museum director and chief curator Jennifer McCabe, which includes 24 in total, provides a concise and thought-provoking survey of the kinds of motivations that have been often overlooked in the history of the genre.

Of course, the idea of counter-landscapes is a reference to the work of the French philosopher Michel Foucault, who defended the notion of counter-memories as those that have been repressed or marginalized: memories of happenings that the status quo could not accommodate. Starting from this premise, we could say that works like Abramović’s “Looking at the Mountains” is a counter-landscape in the sense of inverting the iconic image of Caspar David Friedrich’s “Wanderer Above the Sea of Fog.”

Friedrich’s painting of a rather well-dressed man at the summit of a high mountain peak is considered by many to be the epitome of Romantic art because it provides an image of mankind overcoming nature, where the mind is set free by the sublime expanse of pure metaphysical contemplation, and the gaze places humanity in the position of being both the pinnacle and surveyor of the natural world.

Abramović’s work is a counter-landscape inasmuch as it inverts all three of these premises by situating the artist between the heavens and earth, where the image places her firmly in this world, and the darkened clouds above provide a sense of existential isolation rather than metaphysical mastery.

A different kind of counter-landscape, aiming to challenge the ideals of the Enlightenment as much as those of Romanticism, can be found in the works of Agnes Denes. Her three images from the Wheatfield series serve not just to question the narratives of progress and civilization but to highlight how skyscrapers provide corporate CEOs with a Friedrichesque worldview from atop, in their offices and boardrooms, albeit places decidedly removed from nature.

But, of course, this is the point, and these three photographs can also be read as a three-act play of sorts, with the first image revealing the detritus of modern civilization set off against one of the greatest symbols of the Enlightenment – the Statue of Liberty. The next shows us an expanse of unharvested grain, demonstrating the power of reclamation, but not just in a literal sense. Rather, the juxtaposition of field and figure, the latter bearing the words of the poet Emma Lazarus, serves to underscore an expanded notion of “liberty, equality, and fraternity.” Denes’ project points to the hope of reclaiming a lost sense of congress between nature, people, and the greater ecology of exchanges that make up modern life.

This is highlighted by the third photograph from Wheatfield, which struck a chord at the height of the environmental art movement, but which reads differently today with the World Trade Center pictured in the background. The image now occupies the place of a memory as much as it functions as documentation. Denes’ work, and the space allotted to the twin towers, becomes even more relevant for having pictured the place where a conflict over capitalism, the first and third worlds, and secularism and fundamentalism would eventually explode in an act of terror. In this way, we learn that counter-landscapes always already contain counter-memories, and that the archeology of images from our past can come to haunt our understanding of the future.

It is this temporal element that is highlighted throughout the exhibition as we encounter Mendieta’s symbolically charged acts with her body and the earth, or Piper’s critique of silenced minority positions, as well as Pope L.’s profound performances about the grueling struggle for artistic recognition in an art world that continues to be permeated by racism. These works and others in the show are part of the profound archive that McCabe has assembled in order to highlight how we think about various genealogies of artistic disciplines that have not only challenged the status quo but have forever changed the art world as we know it.