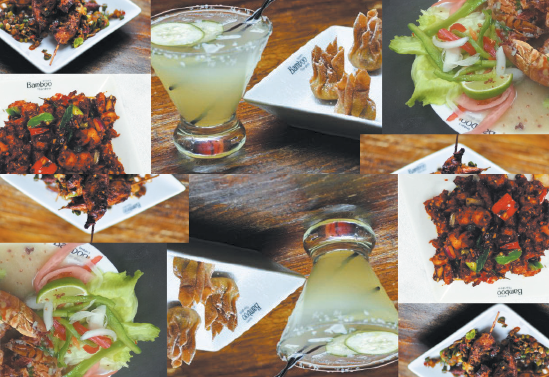 Sloane BurwellMarch 12, 2016
Taste0 Comments
0
0
0
0
0
0
0
I’m not sure if I love to travel because I love to eat, or if I love to eat because I love to travel. I’ve often thought the Marines should have a peacetime recruitment slogan that says, “Visit new and exotic locales, meet interesting people and eat their food.” I might have seriously considered signing up. The story of food is the story of people, experiences, local resources, and how they merge to create new and interesting ideas.
I love being surprised by food and bringing along friends to share the surprise. I’m always on the hunt for new culinary ideas, and sometimes it’s hard to maintain a childlike wonder for the hope of something new. Well, I found it recently. I know I’m late to the party, but as they say—better late than never.
Inchin Bamboo Garden in north Scottsdale was my first exposure to Chinese food with an Indian accent. Actually, having been there repeatedly, I’m not sure if it is that or Indian food with a Chinese accent. Either way, I love it and I’m hooked.
Over a century ago, a small but mighty population of Hakka-speaking Chinese took root in Kolkata (formerly called Calcutta). Their influence on the largely vegetarian dishes has been embraced and become a bit of a national treasure (in the same way that the English have adopted curry as a national dish), and can now be found in North Africa, Singapore and regional hubs like Chicago. And now Scottsdale.
Inchin’s cavernous location is a square box filled with rows and rows of tables. Being so large, it deceptively seems like you might be the only one there. You aren’t. This place is packed with families on weekends. Lunch is a great time to enjoy a slower-paced, less-hurried meal.
I’d start with their tasty soups, like the Sweet Corn (cup $4, bowl $12), a magically thickened clear broth with a hint of sweetness from the handful of kernels found throughout. This tasty soup is a sweet foil to the heat that comes from the rest of the dishes. A note: the food here can go from mild to nuclear. When you say, “I like it spicy,” make sure your server knows what that means for you.
I loved the Manchow Soup ($4/$12), a thicker concoction loaded with chunky veggies cut into batons, and swirled with eggs, à la egg drop soup. This toothsome potage beats the winter blues, not that we’ve had them as of late.
I’m crazy for their Momos—a spin on potstickers and dumplings, with a hint of the spices you’d find in samosas. These steamed versions are pillowy and loaded with goodies. My favorite was the lamb ($10), a half-dozen chunky contenders that beg you to create your own dipping sauce. About that—each table comes with seven bottles of sauce, from a mild soya to tongue-popping chili (both green and red). Exercise caution. When the bottle indicates hot, it is HOT. Let’s just call my green hot sauce experience a lesson in future restraint.
Get the Chicken 65 ($10), which is chicken sliced into large coins, wokked in hot sauce (adjusted to your palate) and served with fresh curry leaves, bell peppers and dry chilis. This dish makes for fantastic leftovers. One note about this fusion: it is much better the next day than classic Chinese because it’s missing the cornstarch-y congealed factor. I ate this cold for breakfast the next morning. Lazy? Maybe, but it was delicious.
The Crispy Chicken Chili Honey ($14) is about as close to sweet (minus the sour) chicken as you’d get at a Chinese joint. Spicier, of course, with enough honey to round out the chili-based bite. Chunks of wok-cooked chicken coated in crunchy batter give textural interest, without the otherworldly orange-red sauce that Panda Express made Americans think is legit Chinese food.

The Crispy Eggplant Chili Honey ($12) utilizes the same kicky sauce, coating the well-battered and wokked eggplant, creating a fantastic texture and flavor explosion. It’s a great exposure to eggplant for the eggplant-challenged. I hear from friends all the time that they’d eat more eggplant if the texture were different. If that is you, then this is your dish. Go for it!

The Shanghai Potatoes ($12) were interesting, in a good way. Sliced like extremely thick potato chips, these guys come tossed in a spicy red sauce (kick it up a notch!) with cashews for crunch. My dining companion said these were an Indian version of scalloped potatoes, and I think that’s about right.
The Cauliflower Manchurian ($12) is my favorite dish. You might recognize the dish as Gobi Manchurian in other places. Here, it comes with two options, the dry rub (good, actually very good) or in a gravy for $1 extra. Spring for the extra buck so you get the thick, chunky, crunchy version loaded up with umami flavors, with the same veggies as the Manchow Soup. Perfectly battered and fried hunks of cauliflower are wokked to perfection and coated with gravy. If you eat it without the white or brown rice that comes alongside, it’s almost a stew.
For noodle fans, please don’t skip the Hakka noodles ($13, with the addition of chicken). These eggless noodles are a ramen-vermicelli hybrid. Cooked “dry,” they retain their shape and texture and never dissolve into a starchy mass (even the next day). Ask the kitchen for an extra minute or two in the wok for more snap and crunch. At one point, I found myself wondering if Indo-Japanese fusion is possible, because these Hakka noodles would make a fantastic ramen.

I am now a big fan of Indo-Chinese cuisine. So while I save up money for my next big culinary travel adventure, you can catch me at Inchin, whetting my appetite for the big world and all of its flavors.