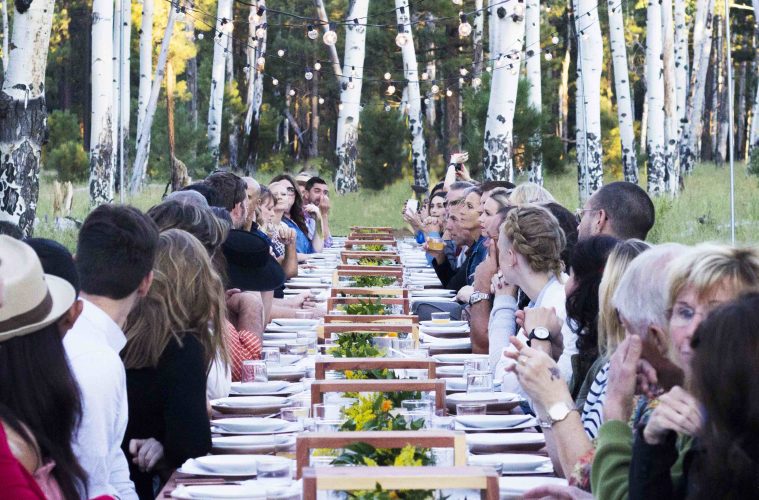 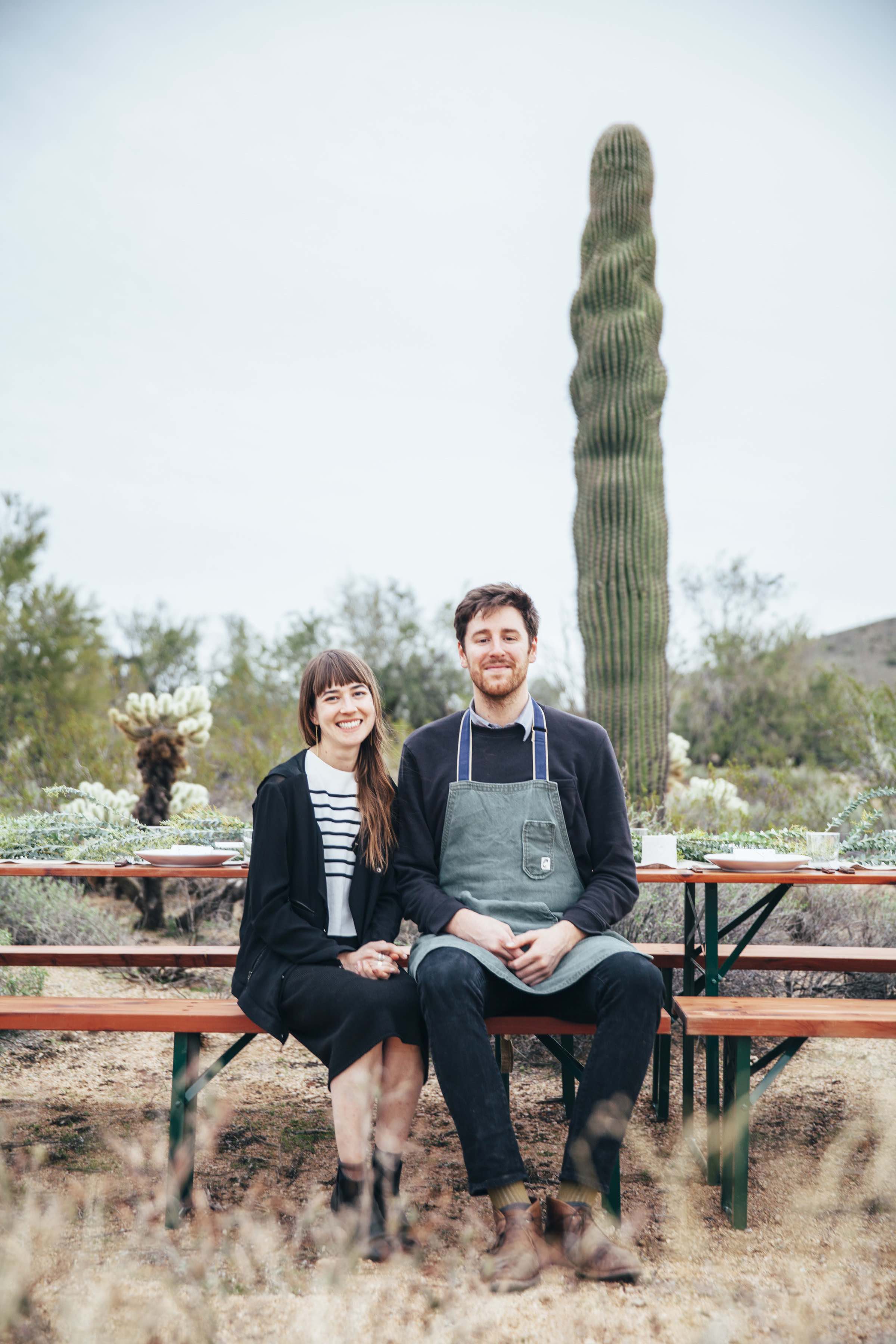 Destination dining company Cloth & Flame combines a sense of adventure with the desire to taste and explore high-quality food. Cloth & Flame was founded four and a half years ago by Matt Cooley and Olivia Laux, business and romantic partners, who share a love of travel, exploration and wilderness.

The couple recently became engaged – coincidental because their business hosts so many weddings. “Cloth & Flame will host our wedding, however, we won’t be in the production,” Laux says. “Inevitably, we will probably end up carrying a table or something, in a tux or wedding dress,” Cooley says.

More than just a catering company, Cloth & Flame currently counts around 15 regular employees; six are on salary, along with a number of regular contractors, Cooley says.

Here is the basic concept: find a mesmerizing outdoor space not often frequented by the usual hiking, mountain biking and camping crowds and host unique and unforgettable outdoor dinners, not just for celebration, but also to build community.

“When we go scout and explore, it is fun to try to figure out what unique logistical challenges may happen at each site,” Cooley says. 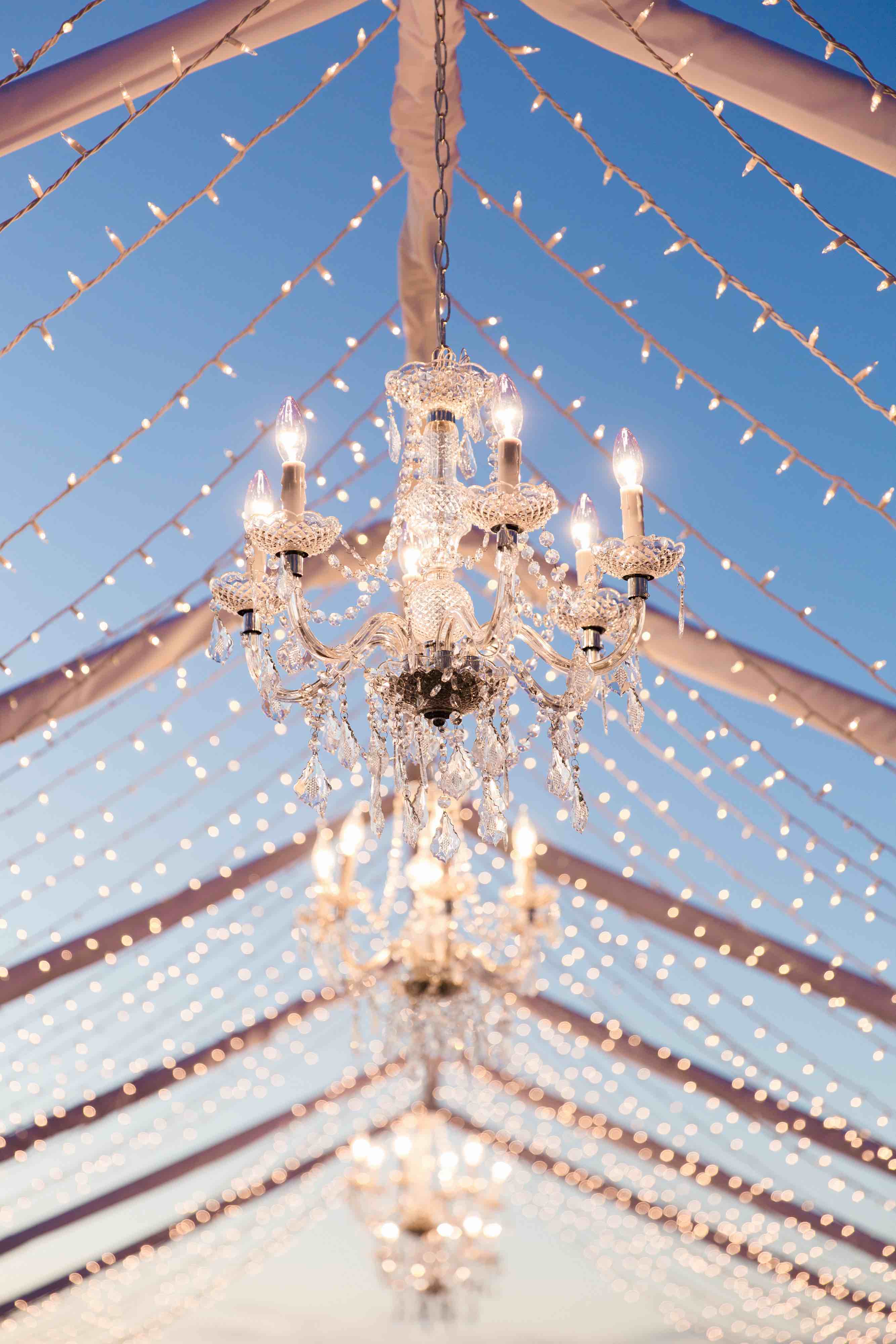 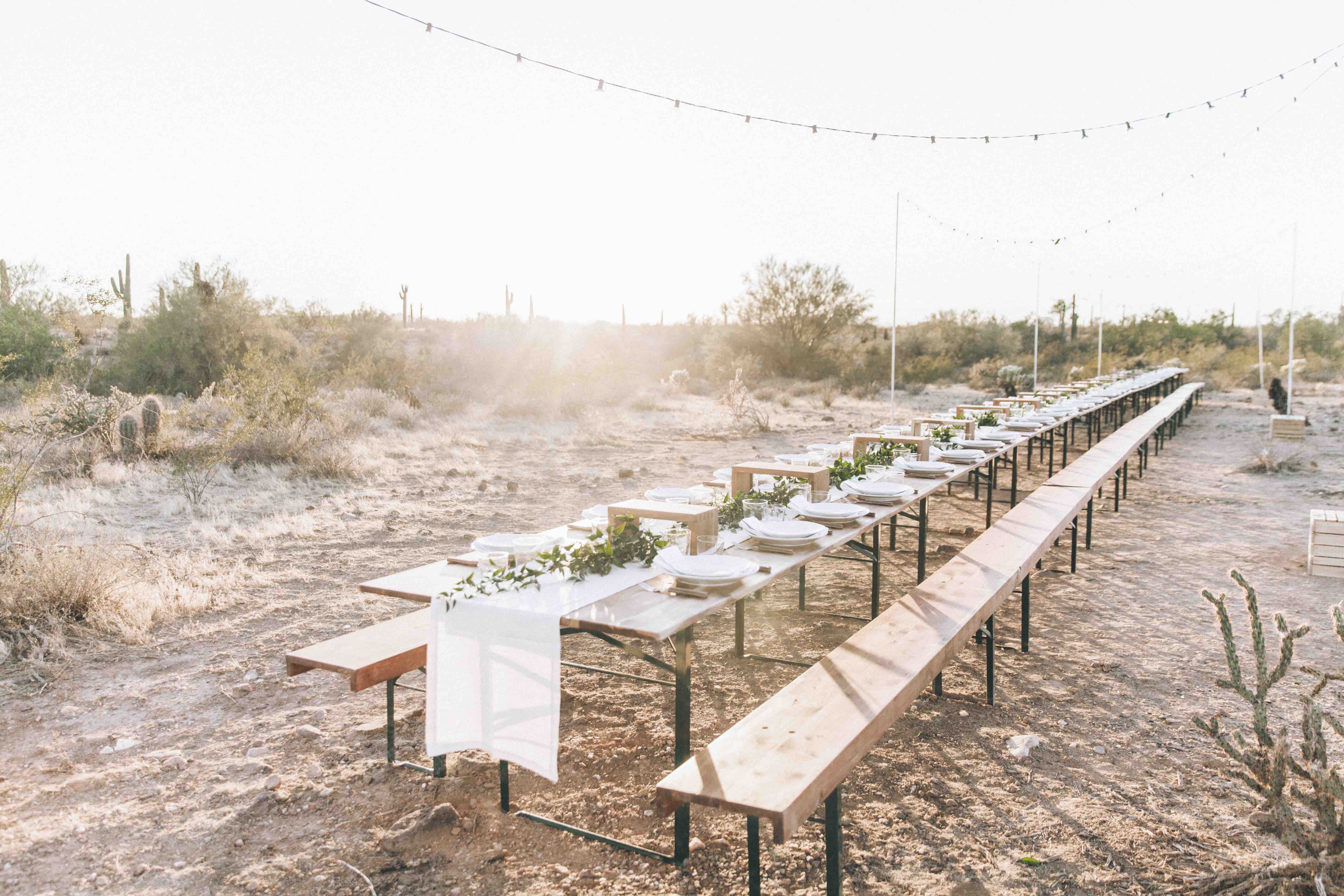 The business hosts three main types of events: corporate functions, weddings and public-invited shared dinners. All of the dinners are hosted outdoors with unique natural backdrops, and all the meals are served family style.

When Cooley and Laux host an open-to-the-public dinner, they have a list of sites they love to visit and people they like to work with. Sometimes they rent an event space from state or local parks, but often they are working with private landowners and trusts.

Cooley says they have a commitment to work with partners to promote conservation and help them keep their lands undeveloped. Often the places they go are not large spaces, so they keep some of their dinners small (around 40 people).

Some of the unique spaces they’ve brought guests to include the Nordic Village site in Northern Arizona, the base of the Superstition Mountains, Papago Park, Joshua Tree in California and sites around Park City, Utah. Cloth & Flame often arranges transportation options to their sites, sometimes by bus or caravan.

This year Arizona State Parks won the highest honor for state parks in the United States, and Cloth & Flame will be hosting a celebration dinner for the directors. Other clients have included Uber, Tuft & Needle and even McDonald’s Corp. “We had Audi out here recently. They drove all these new models that they just released up to Roosevelt Lake and we had a lunch out there,” Cooley says.

“We have a really cool event coming up with the Royal Bank of Canada where we plan to go out to Saguaro Lake, build a dock and serve a floating lunch,” Cooley says. “Then we will take guests in a helicopter to the bottom of the Grand Canyon for a dinner, and later fly to the Superstition Mountains and do a meadow-style dinner out there.” 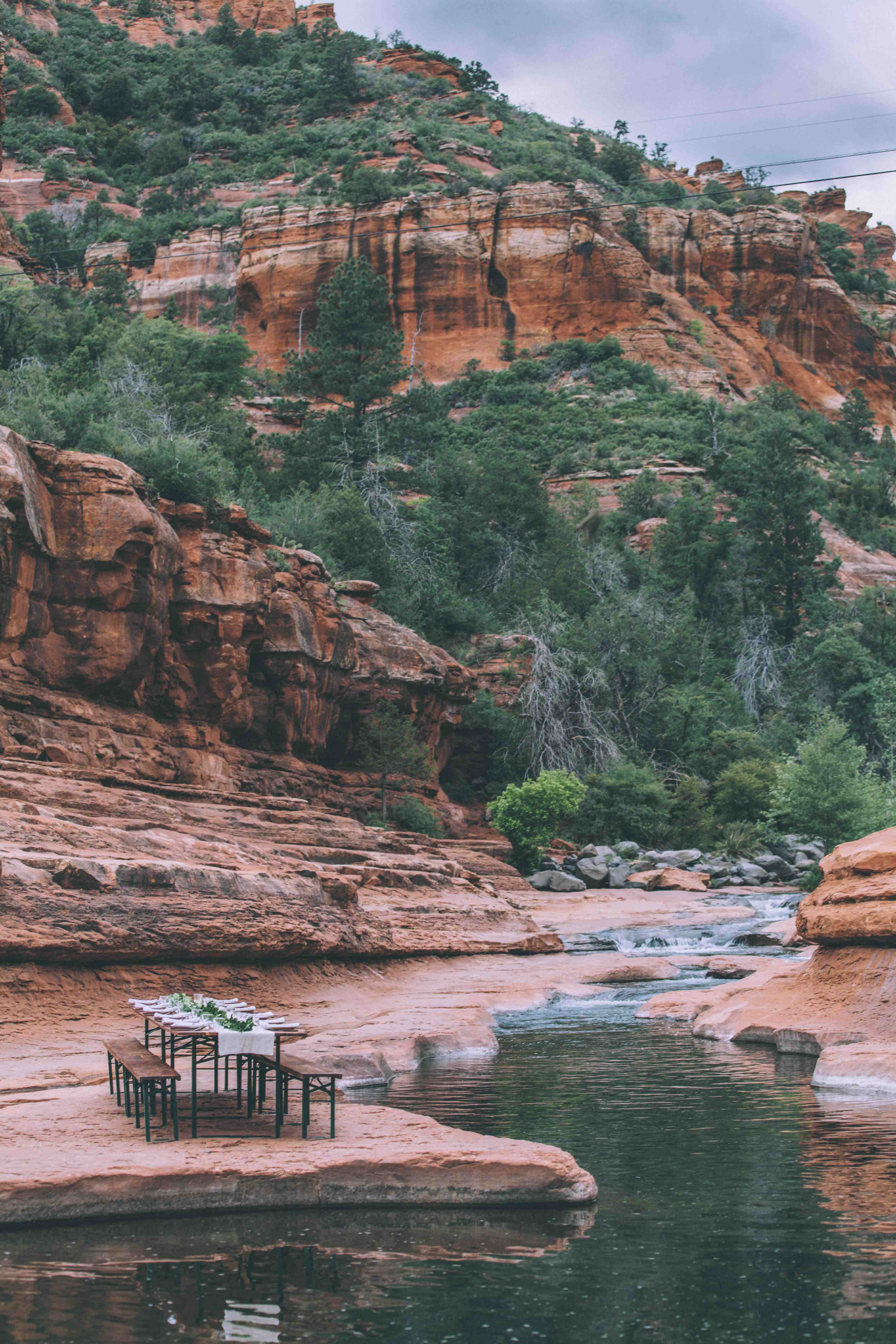 The couple that helms Cloth & Flame has a romantic story to match their wild, exciting and unique events. They met in 2009 while couch-surfing and remained friends for years. Their mutual love of the outdoors and adventuring provided opportunities to spend time together, even though they lived in different states. Laux has roots in Wisconsin, and Cooley is mostly from Nebraska but has family on the East Coast.

Laux has a background in chemical engineering and was working for a while in Globe as a metallurgical engineer. One trip, Cooley came to visit from Portland and then rode his bicycle nine hours from Tempe to Globe. “I have been so inspired and enthralled with Cooley’s personality. He’s so vivacious. I think I always had that as part of myself, but it took someone else to bring it out,” Laux says.

The name of Cloth & Flame comes from a different company they started together that specialized in custom hot air balloon rides. “We started the balloon ride company first. But now we try to keep them separate because as soon as you mention hot air balloons, people think that’s how we are going to be transporting them,” he says.

The hot air balloon business can fly 25 to 50 passengers per day and will then do a meal service after the flights. Cooley says they take people to extraordinary spots that no one could really get to unless they landed there.

After the balloon ride, they build their own wooden tables, put put flowers, plates and settings and serve the food. The concept became so popular that it snowballed into the idea of shepherding folks to even more locations for the catered events and functions. 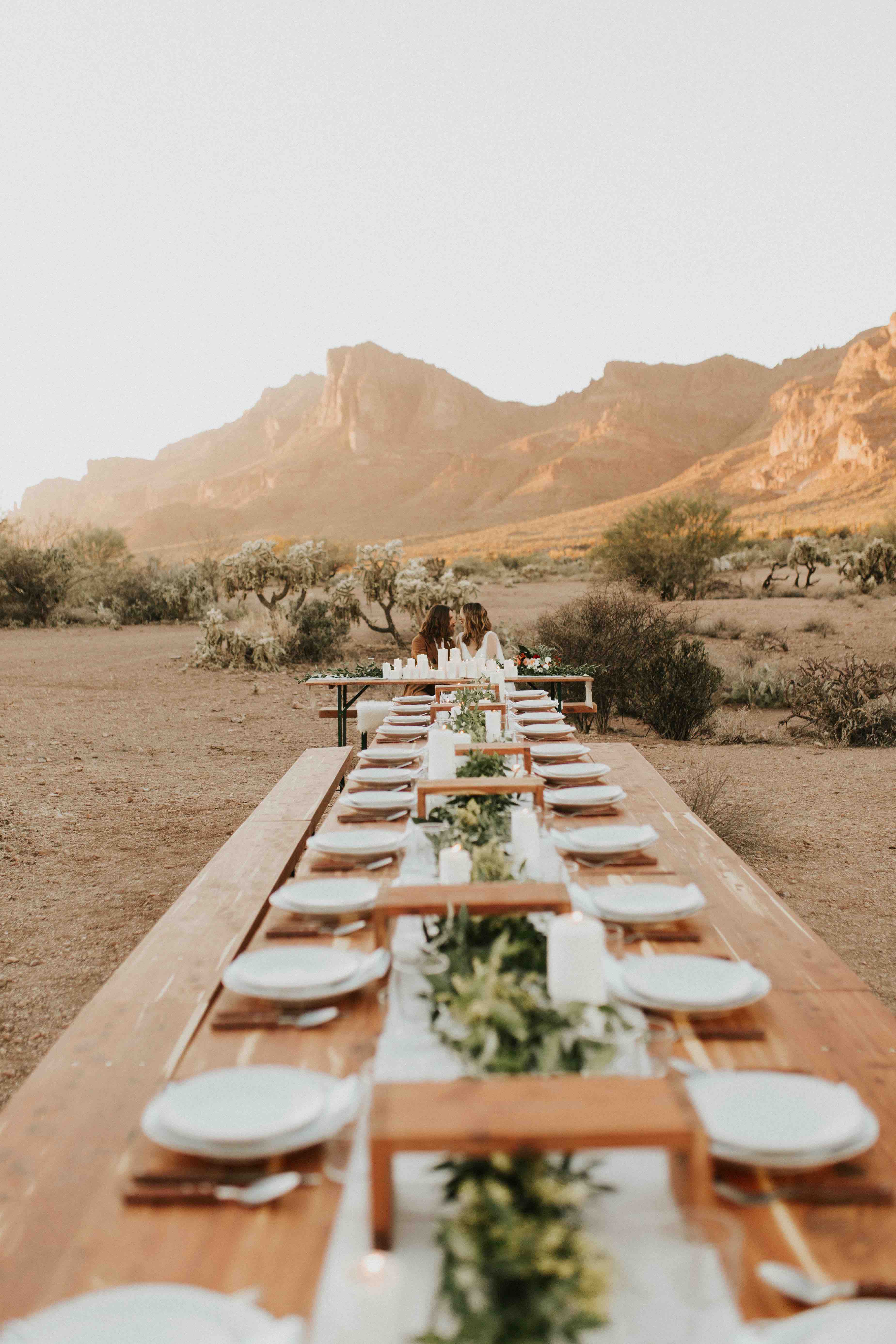 What they serve on the table largely depends on what’s in season and what’s on-trend in the dining world, while also catering to the whims of their executive chef, Aurore Yasinsky. “What we do very much fits into the farm-to-table movement,” Cooley says.

Yasinsky, previously of Vogue Bistro in Surprise, has what Cooley and Laux describe as a big personality and an eagle eye for quality ingredients. “We serve exciting foods that people don’t usually see in restaurants,” Cooley says.

They generally source organic and naturally produced foods, and their meals are hyper-seasonal. Yasinsky and their other chefs work directly with local farmers, such as Crooked Sky Farms, local vendors like Hayden’s Flour Mill and local sources for butter and other dairy products.

“Aurore loves food, whole food. She’ll go visit Farmer Frank from Crooked Sky and see some onions, pull one out of the ground, start nibbling on it and ask: ‘Hey can I pick some of these? They seem ready,’” Cooley says.

At the group meals, everything is served family-style. Menus are posted approximately one week prior to the occasion, in case any guest has a dietary restriction that needs accommodation. “It’s kind of an educational process because people don’t often rub shoulders with the food [sourcing] process, so they don’t actually know when the vegetables they like are in season,” Cooley says. 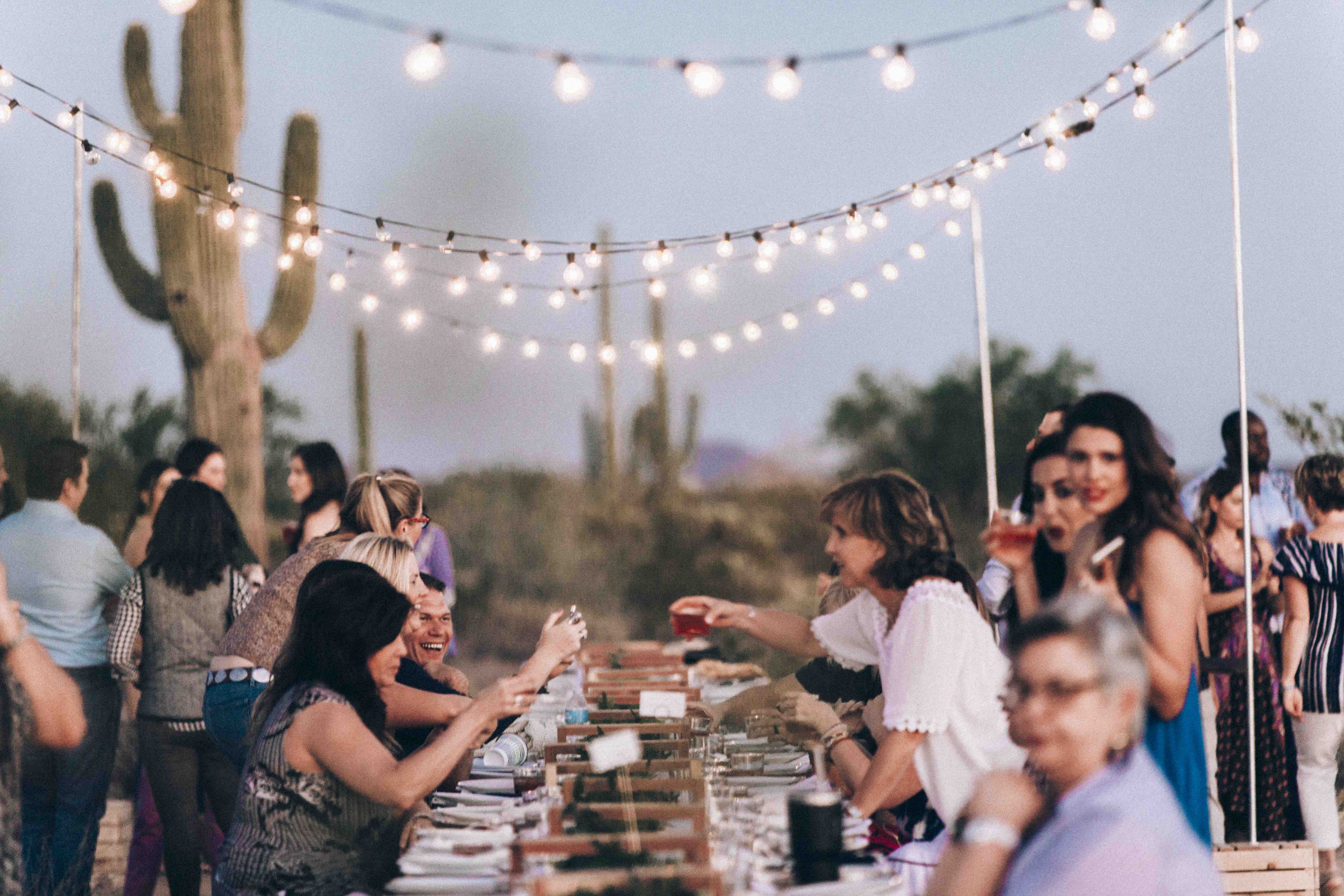 Cloth & Flame also has a guest chef program where they invite drop-in chefs, some well known, such as Aaron Chamberlin, others who don’t necessarily have restaurants of their own.

At present, Cloth & Flame maintains a business office downtown near Cartel Coffee. But they are currently planning to buy a larger facility to use as their catering staging kitchen.

They are also developing an idea for a luxury camping (glamping) resort near the Superstition Mountains and are working with Chuck Backus, formerly of ASU, who owns some of the last private property on the way to the Peralta Trail. Cooley and Laux are envisioning a large visitors area and welcome center, along with canvas tents with steel and wood structures. The concept will be similar to an eco-resort, like the ones that are popular in Mexico or the Caribbean. “I would say the Superstition Mountains is one of the most iconic areas in our state,” Cooley says. 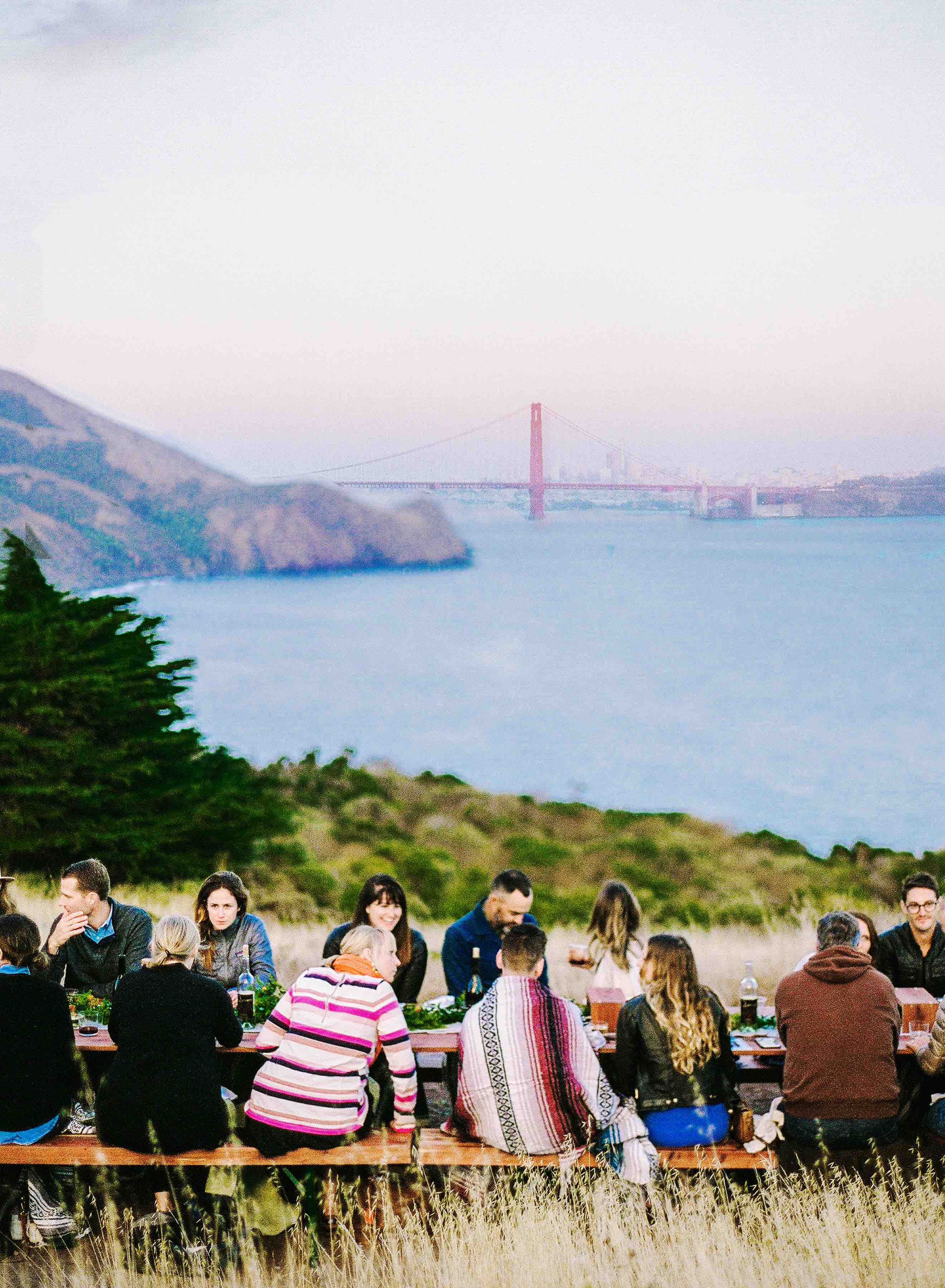 While the couple continues to plan for the future and dream big, Cloth & Flame will host its first pop-up urban dining experience April 19 at Cityscape. They plan to block off Central Ave. between Washington and Jefferson and have invited chefs from the surrounding restaurants, including The Arrogant Butcher, Blue Hound Kitchen, Chico Malo and Squid Ink Sushi.

The idea for this open-to-the-public dinner is to expand beyond amazing outdoor spaces into other offbeat, fun or unlikely locations. “It’s amazing how many ideas can come together from the people who support us that are so adventurous,” Cooley says.

If you would like to try the Cloth & Flame urban dinner experience, plan to book a seat early, as most of their events sell out fast. Visit clothandflame.com for prices and details.