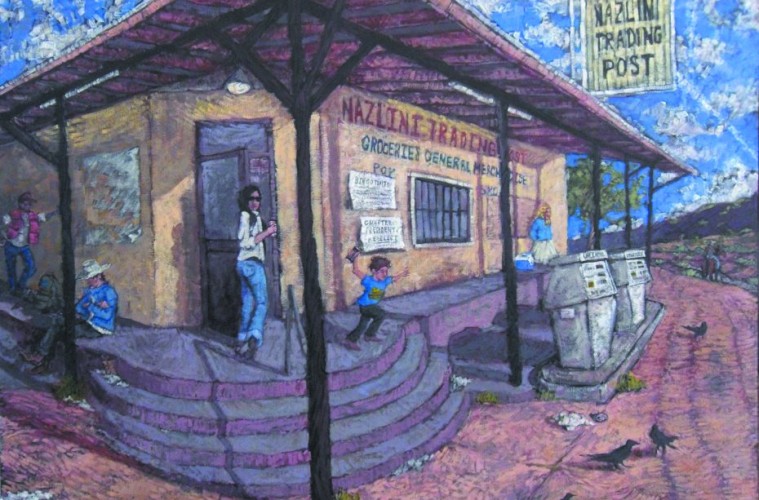 In the Phoenix metropolitan area, art certainly isn’t relegated to fine art galleries. There are plenty of exciting murals and outstanding public art projects about town, and some great exhibitions happen in places that may be known primarily for a different function. For instance, local rock ’n’ roller and artist Steve Davis of Glass Heroes had his Despo-Davis exhibition at downtown bar The Lost Leaf. Central Phoenix coffee shop Lux keeps a rotation of strong work on their walls from emerging to established artists. We’ve rounded up a few of these off-the-beaten-path shows happening around town in January, the first three of which were curated by Philip Talarico of the Downtown Artists Collective.

At Fair Trade Café in downtown Phoenix, you can ring in the New Year with an exhibition of paintings by Averian Chee. The Navajo artist from the small Arizona town called Nazlini began his art career in 2006, creating murals. Eventually, smaller paintings became part of his repertoire. Chee often works in an impressionist style, thick with layers set in motion through dry brushstrokes. His human subjects are captivating, emitting subtle emotions that inspire curiosity.

Chee has shown around the Valley, attracting a growing fan base, as well as attention from curators like Nicole Royse of Monorchid/Bokeh galleries. She says, “Chee has an incredible eye, a great technique and is a vivid storyteller. His artworks are simply striking, evoking the senses with a beautiful color palette, bold lines and painterly brushstrokes.” You can see his Chee’s paintings all month at Fair Trade Café, 1020 North First Avenue in Phoenix.

Abe Zucca is another artist whose work will be adorning walls in the downtown area. He has been exhibiting his paintings around Phoenix for the last five years. A large percentage of Zucca’s work is portraiture. The subjects vary, and they often elevate mundane scenarios, such as a passenger and bus driver engaging in a routine transaction. It’s the boldness of the strokes that really stands out: the way they layer and mingle to present raw emotion. Zucca’s show runs through the end of January at Songbird Coffee and Tea House, 812 North Third Street in Phoenix.

Hotel art in Phoenix has come a long way—especially with hotel owners like Ben Bethel from the popular boutique hotel the Clarendon. An avid collector himself, Ben’s property has long been home to work by talented artists. This month, renowned local artist and sculptor John Tuomisto-Bell is gracing the Clarendon with two major sculptural works. In conjunction, the hotel will also feature paintings from his Falling Man series, which was created to explore man’s passion for war, violence and aggression. Since the 1990s, Tuomisto-Bell’s resume has been filled with exhibitions and awards. He has work in some permanent museum collections, including SMoCA and Mesa Contemporary Arts. The hotel is located at 401 West Clarendon Avenue in Phoenix.

MADE art boutique on Roosevelt Row features a variety of unique, artist-made items, from jewelry to pottery, with lots in between. Their Mantle at MADE is a wall area reserved for artist exhibitions. In January, you’ll see art by Constance McBride. The artist’s figurative clay and mixed-media sculptures are often breathtaking. McBride’s mastery of the ceramic medium is easily recognized, but it is how she parallels human life to that which withers that makes her work haunting and unforgettable. This exhibition opens on January 15 and runs for one month at MADE art boutique, 922 North Fifth Street in Phoenix.