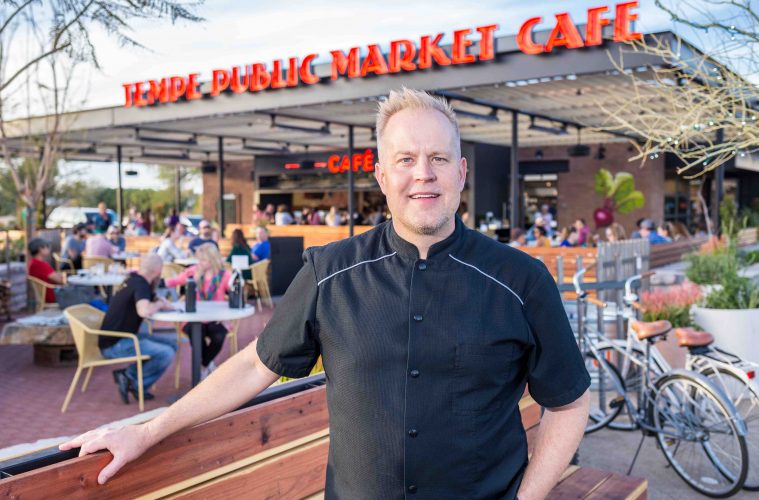 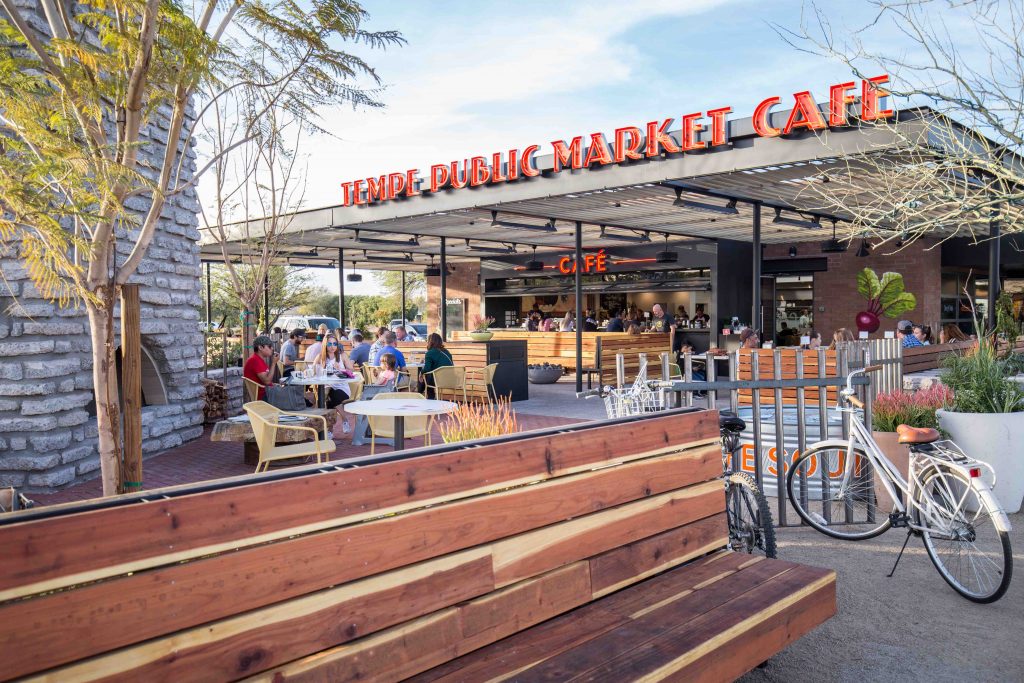 Aaron Chamberlin has known what he wanted to do since he was a kid.

“I grew up in Mesa, and right out of high school, I knew I wanted to be a chef,” Chamberlin said as we sat on the spacious patio of Tempe Public Market Café, in the shade of a large brick outdoor chimney. The café had opened its doors in south Tempe just a few days earlier, on January 12.

“I left Arizona telling myself that I wanted to work in all the major cities, work in the best restaurants, and then come back and open my own. I remember being at my house, about four miles from here, in high school, and I had to write up some sort of paper about what I wanted to do with my future, and literally what I wrote down, I’ve almost completed.”

Chamberlin, along with his brother and business partner David Chamberlin, currently operates a number of restaurants around the Valley, including St. Francis and Phoenix Public Market Café. In the next few weeks, Chamberlin, with chef Suny Santana and artist Gennaro Garcia, will be opening Taco Chelo on Roosevelt Street.

Before Chamberlin opened any of these, though, he packed his bags and headed off to San Francisco to begin a long decade of metropolis-hopping, exploring and learning from some of the buzzed-about restaurants in the country along the way.

Chamberlin worked at Rubicon in San Francisco, opened by restaurateur Drew Nieporent and co-founded by director Francis Ford Coppola and actor Robert DeNiro. Though it closed its doors in 2008, Rubicon was a trendsetter in the Bay Area gastronomy and wine scene for over a decade. Like Chamberlin, many of the restaurant’s former cooks have gone on to open their own successful restaurants.

Chamberlin worked in fine dining establishments in New York City, Los Angeles and even Mexico for a little bit, before returning to Phoenix in 2003. Upon his homecoming, he was amazed by how little the restaurant scene in the Valley had changed. 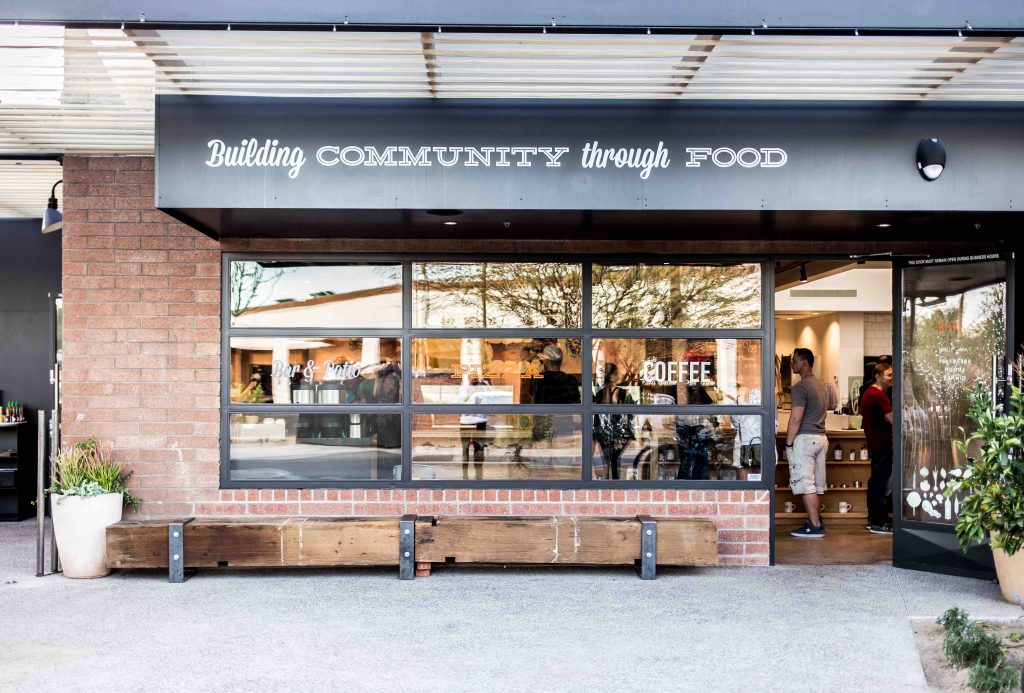 “When I was in high school, there were a handful of chefs: Christopher Gross, Mark Tarbell, Eddie Matney, Michael DeMaria and Vincent Guerholt,” Chamberlin said. “When I came back, there were, like, no new chefs that caught my attention.”

Once back in the Valley, Chamberlin began working for La Grande Orange (LGO), then recently opened, now an Arcadia landmark and anchor to a small ecosystem of restaurants in the neighborhood, run by Bob Lynn and LGO Hospitality. Chamberlin helped Lynn and company launch a few restaurants before leaving in 2007 to begin the process of opening St. Francis.

“What I learned when I worked for [LGO] is that community gathering places, where you can hang out and lounge, are what people really want – casual places where families can come,” Chamberlin said. “I slowly started shifting my career.”

St. Francis is located on Camelback Road near 2nd Street. Chamberlin knew the area was “underserved” and had “all kinds of opportunities.” The light rail starting running in 2008, and Arizona State University had opened its downtown campus a couple of years before that.

“Since I opened St. Francis, I think something like 33 restaurants have opened within a three-mile radius,” Chamberlin said, proceeding to list the lion’s share of these restaurants extemporaneously.

With the success of the locally sourced menu and fancy cocktails of St. Francis, Chamberlin then turned his eye south, launching the Phoenix Public Market Café in 2013.

Previously run by the nonprofit Community Food Connections (CFC), the 14 East Pierce Street location had served as an indoor location for the Phoenix farmers market. Phoenix Public Market Urban Grocery closed its doors in 2012, citing a lack of sufficient population density and decreased traffic due to the long construction of the light rail, which created an opportunity for Chamberlin and his team. 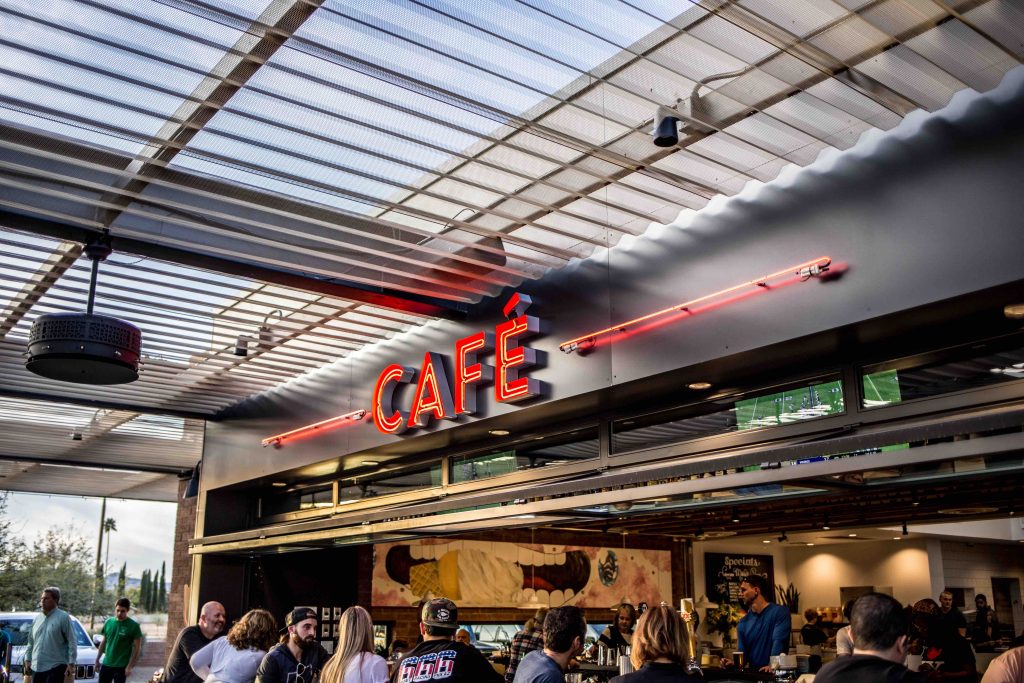 With loads of experience, a clear vision and a fresh young design team, Chamberlin was undeterred by the problems the previous tenant had experienced. But even more than that, Chamberlin wanted to partner with and help the downtown farmers market remain open and thriving. “I literally go to a farmers market every Saturday and Wednesday. I’ve dreamed of having a restaurant where I could open my kitchen door and walk out to a market,” said Chamberlin.

“I opened there purely because of the farmers market,” Chamberlin explained. “One thing that is important for me is the use of high-quality ingredients. I love seasonal produce and farmers markets, so I wanted to stick with selling high-quality seasonal food at a value. That’s the direction I went with the café.”

Sara Matlin, Market Manager at Downtown Phoenix Public Market, said working with Chamberlin has been wonderful. “He has the same kind of mission as us,” Matlin said as we stood among the bustling crowds at the market on a brisk Saturday morning. “He’s trying to build community through food. His chefs are always out here picking up produce from our farmers.”

For the redesign of the space, Chamberlin turned to his then neighbor and fellow local restaurateur Aric Mei, who opened and runs the Parlor Pizzeria and whose latest project, the Farm at Los Olivos, was profiled in last month’s issue. Mei teamed with another designer, Blake Britton, who sadly died of cancer in 2015.

“When you’re going into these adaptive reuse projects, the existing architecture always presents challenges and opportunities,” Mei explained. “We worked within the parameters of the existing building and took the front space, which is the south half of the building, and really opened it up. Then we added a bunch of windows, cut in that big bar and created the patio on the east side of the building, which is the optimal exposure for this climate, because in the summertime, if you have a patio on the west, it just gets nuked.”

Despite the challenges experienced by the former occupant, the Phoenix Public Market Café has done incredibly well. “I think success can be very simple, yet it is very hard,” Chamberlin said. “First, have a great design, good service, good food and really just be hospitable. Try to take care of people. That’s really the basics of it.”

For the Tempe Public Market Café, which is located at the intersection of Rural and Warner, Chamberlin went with architect Christoph Kaiser of Kaiserworks Phoenix. If you didn’t know, you would probably never guess that the beautiful brick building was once a Circle K, which Chamberlin described as being extremely ugly.

Aaron and David Chamberlin spent hours explaining to Kaiser what they liked and thought was important for the design and feel of the space. Chamberlin believes the area was sorely lacking the kind of community space that they strived to create.

“We worked with Christoph on how to create a vibe where families can hang out,” Chamberlin said. “How do we make it so kids can spill ketchup on the tabletops and it isn’t a big deal? We didn’t want to get too hung up on things like that.”

The Phoenix location has a wood-burning rotisserie, while Tempe serves pizza, offering four standard varieties, plus a fifth seasonal option. Those are the main menu differences between the locations, according to Chamberlin. 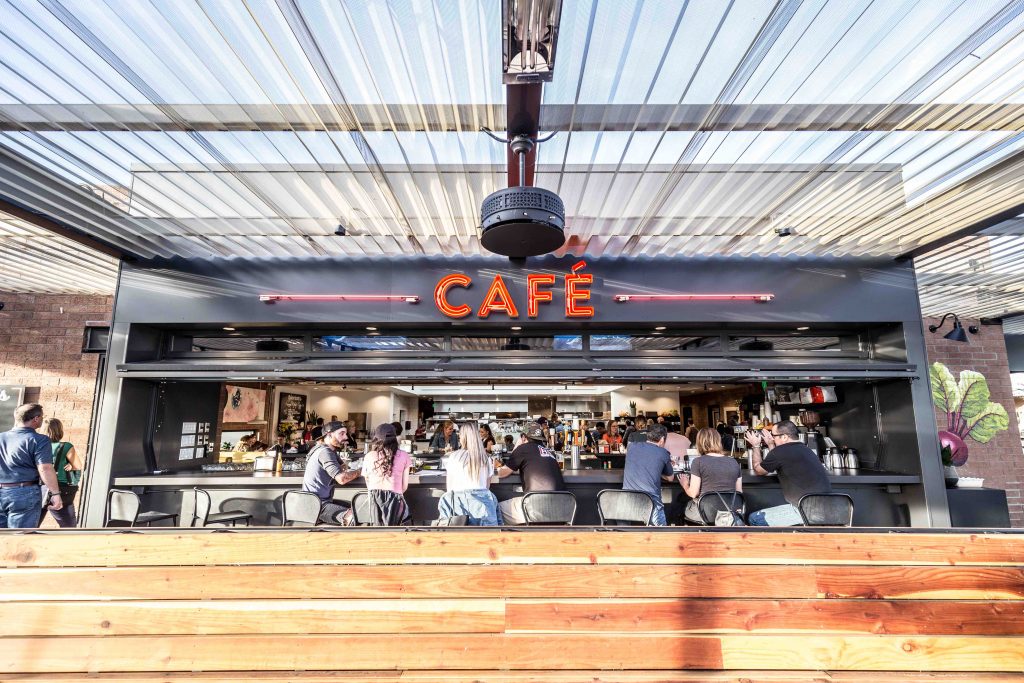 “We have a large dinner business in Phoenix,” Chamberlin explained. “We’re catering to mostly business people who work in downtown, ASU students and people that live in Roosevelt Row, so it’s a little bit of a different demographic. The Tempe café is surrounded by neighborhoods, so we’re feeding families.”

Though the Tempe location only recently opened, Chamberlin has been delighted by the support the community has shown. “This is an area where there are not a lot of independent restaurants, so people are just so ecstatic to have this,” Chamberlin said. “The feedback from the community has been overwhelming. The Mayor of Tempe has been here, and all kinds of community leaders have been supporting us.”

While the Tempe location may be just a few miles away from Chamberlin’s old backyard, where he once dreamed of opening his own restaurant nearly a quarter century ago, the chef and restaurateur has come a long way. With Taco Chelo’s opening next on the slate and just around the corner, Chamberlin is staying busy, building community one meal at a time. 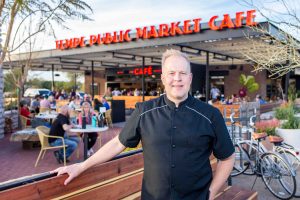