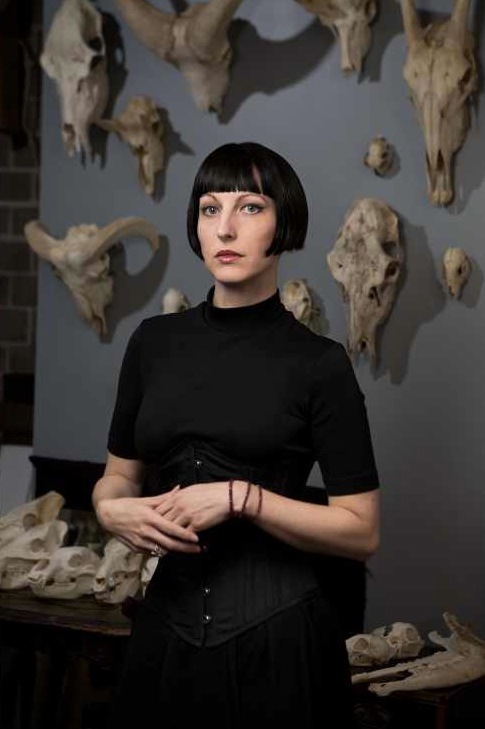 I first met artist Rachel Bess at the end of 2003, when my partner Douglas Grant (who passed away earlier this year) and I moved from New York to downtown Phoenix’s Grand Avenue to open Perihelion Arts. Rachel had a studio down the street that she shared with Karolina Sussland. The pair dropped by unexpectedly, just a few days after we had briefly invaded their building’s shower facilities; we shared a landlord, and our own bathroom was still under construction. A couple of days later, we found the pair peeking in our side door as we unloaded some boxes that had arrived after us. Eventually, we would come to work with Rachel for several years, as we found her work exciting and shared many of the same ideas about art and business, along with several personal interests. We exhibited her paintings and drawings in Phoenix, as well as around the United States and Europe, and never failed to be impressed by her evolution.

Around the time of those initial meetings, it certainly wasn’t a surprise that local artists would be interested in finding out what a couple of new-to-the-neighborhood gallery owners were up to by popping by for a peek. As I grew to know Rachel, it became apparent that her curiosity was both inherent and tenacious—the kind that impresses you and challenges you, simultaneously.

Everything with Rachel is on a need-to-know basis, as in: she needs to know. That continuous journey to the core of everything she engages with, topped off by an excruciating desire to excel, is exemplified in her extremely detailed oil paintings.

As I grew to know Rachel, it became apparent that her curiosity was both inherent and tenacious—the kind that impresses you and challenges you, simultaneously.

The path to becoming an artist was one Bess jumped on at a pretty early age. “I knew by college that I was going to try my hardest to make my living as an artist,” she says. “I started college at 16 (she is an ASU graduate) and had my art degree mapped out at that point. During my first semester, I sold a little linoleum print to a friend for $15, and that’s when it really clicked that it would be possible to pay bills doing this and that things could be okay.” She adds that the small sale paid her pager bill for two months. That technically wasn’t her first art sale— when she was a little kid, she sold Halloween drawings from a table in her front yard for a nickel a pop, adding humorously, “my prices have been steadily increasing since.”

Her determined nature helped her stay rooted in that choice, despite its obvious potential for pitfalls. “One of the hardest things about deciding that you want to be an artist,” Rachel says, “is that everyone knows how unlikely success is, so there are so many people that worry about you. People second-guess you and generally try to persuade you to do something that is perceived as safer. I chose not to apply to grad schools and instead save that money, or rather prevent having that debt, and live inexpensively and focus on making artwork.”

Bess’ work is produced through traditional techniques, and the processes are time intensive; she averages about 100 hours per painting, and her recent works are modest in size, anywhere from 5” x 7” to 11” x 14”, further highlighting the attention lavished on each painting. The ways they engage you are numerous.

The skill is undeniable; viewers add an external layer to the motion and flow of the work as their own eyes follow each impeccable detail to the next. 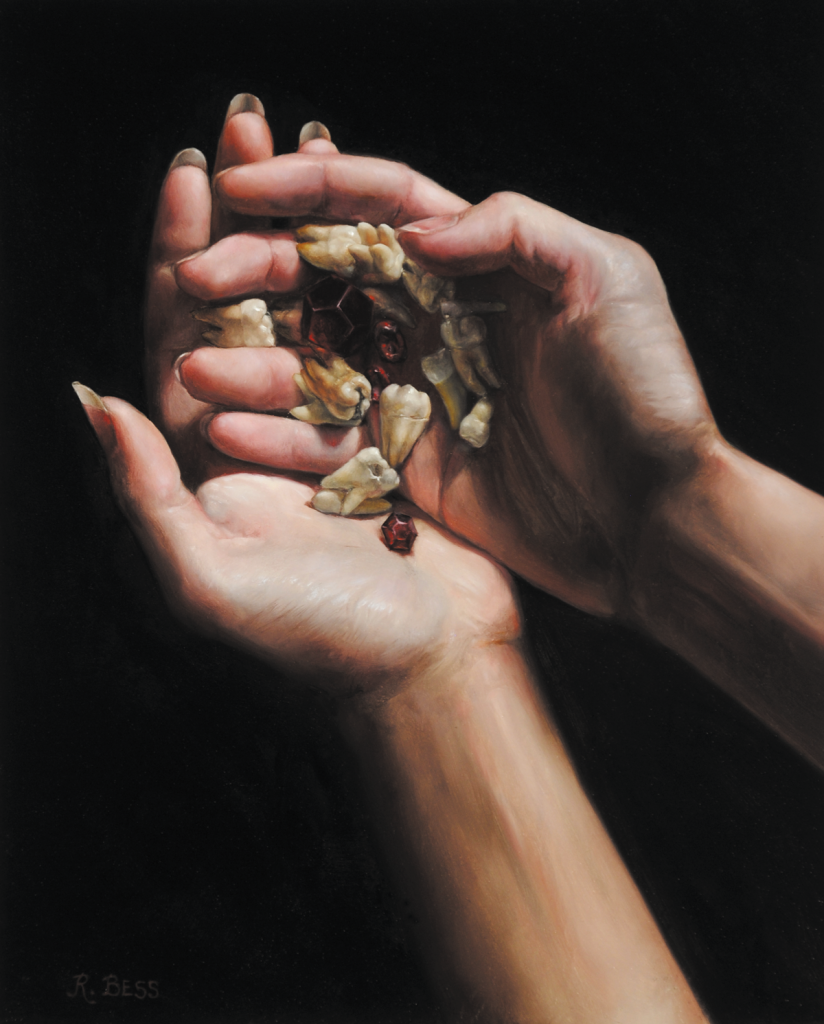 Rachel’s body of work is largely comprised of human portraiture, mostly women, though the mix is peppered by some paintings of men. Sometimes the subjects are in interesting scenarios, but generally they are alone, surrounded by objects that help make them more unique; in one case that could be ghosts, in another, like “Shattered Heart,” it may be shards of a delicate stained glass strewn atop the body of a sullen, beautiful girl.

Bess is selective in her choice of models, as she sees each finished piece as self-reflective—a version of self-portraiture. “The people I use to model are complicated people. As a chaotic person, I gravitate toward those who are similar. I can tell there’s more beneath the surface, and that’s what I am interested in capturing.” For instance, she focuses often on hands, saying that they give cues and also offer clues about what a person is thinking. She is interested in seeing and highlighting the vulnerabilities that reveal themselves, sometimes more subtly than others, and allowing those to become natural focal points. 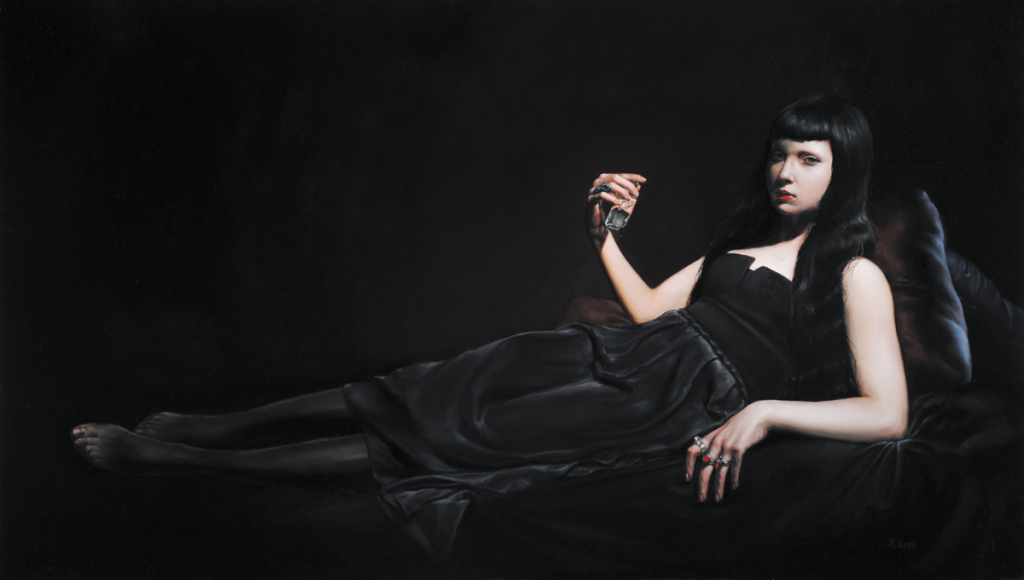 When your paintings include a dark, rich palette and items that are related to decay, like skulls or extracted teeth, people tend to assume you have a death obsession. Bess, who definitely has a love for all things Goth, doesn’t deny that, but it’s truly the entire life cycle that continually fascinates her.

“The overarching theme of my work has always been impermanence. The natural order is for things to grow and dissolve.”

What is left when that happens? When things die or are destroyed, what remains?”

Those are questions she continues to explore in her upcoming exhibition at Lisa Sette Gallery, which opens in January. “This show started out using a gemstone to symbolize the way an inanimate object could connect different people, times and places. The stone is a symbol that could represent shared knowledge, experience or other ways people can be connected, often without knowing it. While making the work for this show, my husband—a kind and wonderful person—and I filed for divorce, so then the idea of an inanimate object used to represent connection took on the idea of both connectedness and division. Previously, I was thinking about the stone being something that people shared without considering the others they may share it with and having this invisible web connecting disparate people or events across time and space. Now it also represents a reminder of a connection that you have with someone and when that connection dissolves, a reminder of that loss.” 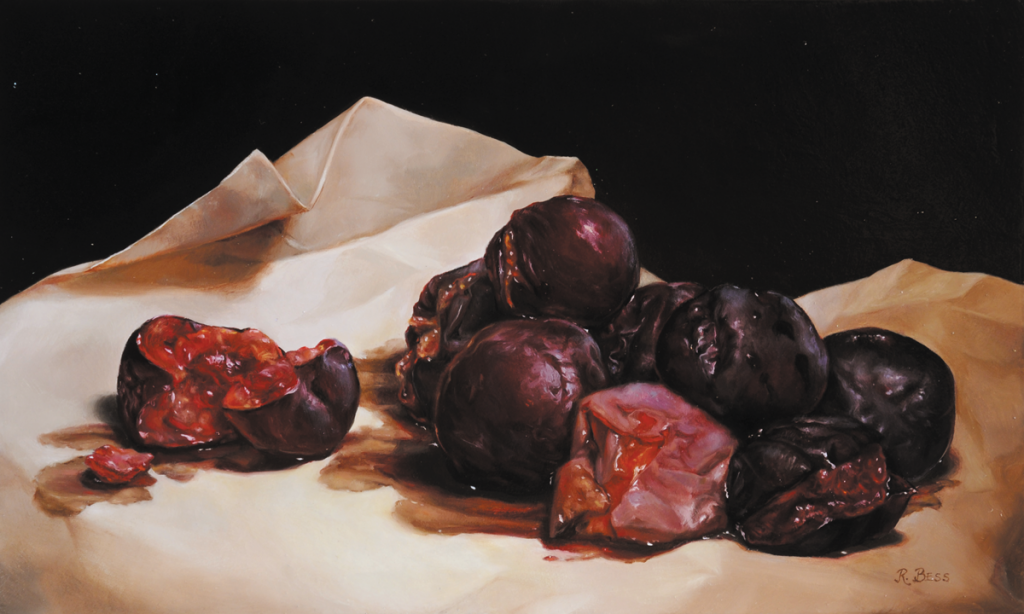 When Perihelion Arts closed its physical gallery a few years ago, I approached Duane Smith—then associate director of the Lisa Sette Gallery—about representing Bess’ work. Smith had long admired Rachel’s art and was even a collector; he saw the fit immediately. Smith is now a program coordinator at the Boca Raton Museum of Art.

“I’m drawn in by the updated classical painting technique and pulled toward the very current story Rachel is telling. Getting to live with her paintings is my admission into a fantasy of great style and mystery.” -Duane Smith

Lisa Sette, with her years of expertise, also saw the benefits of a union with Rachel. “I suppose it was her masterful use of the medium—oil on panel, an extremely old medium used for portraiture—that first drew me in. That technique used to create the type of 21st-century characters that are not a part of my everyday existence was quite appealing to me.” She adds, “Rachel’s work has everything that I look for in an artist—seamless craft that is appropriate to the concept of what she wants to show us. If she had chosen photography, for example, to document this type of today’s youth, I would not have been interested. It is the melding of classical portraiture with 21st-century characters that makes it interesting.”

Rotting fruit is another subject that Bess has been painting the last few years, and they’re enthralling for all the same reasons as her pieces featuring human subjects. Visually arresting, they send the senses into overdrive, conjuring scents and textures. For Rachel, not only does she love the visceral beauty of these different rotting fruits, painting them also gives her an opportunity to use them to parallel the process of human decay through this different perspective. The new show will give guests an opportunity to see a variety of subject matter. 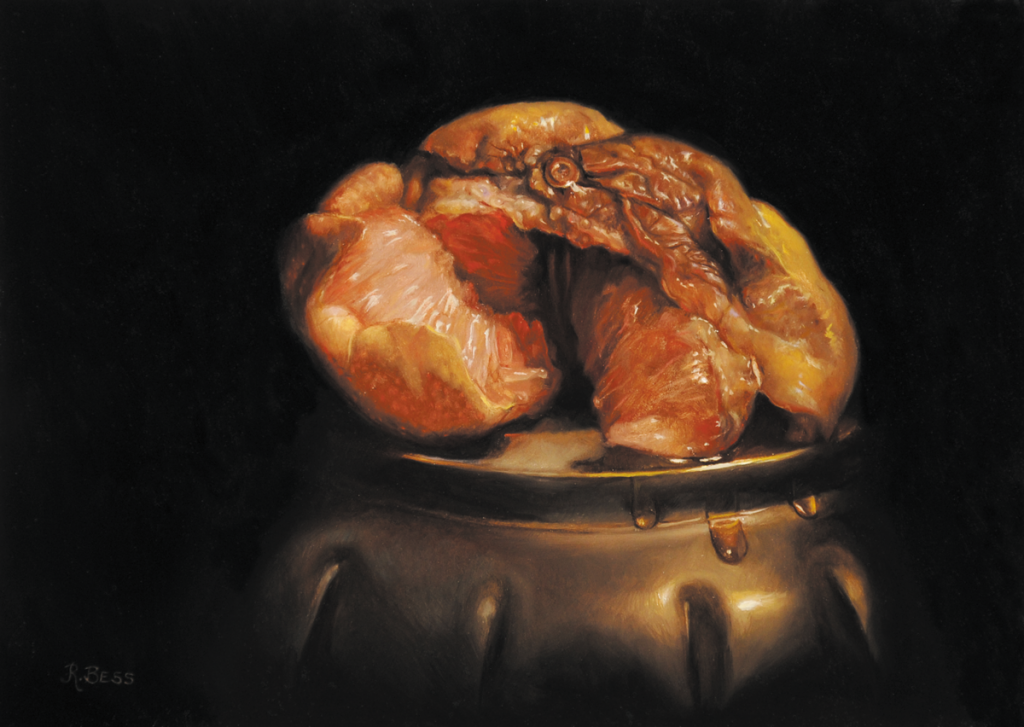 Her talent and style are consistently rewarded. Bess has been creating and accumulating serious collectors throughout her career and has received numerous accolades and awards, including the 2014 Arlene and Morton Scult Contemporary Forum Artist Award, which provided a cash prize and an opportunity to exhibit at the Phoenix Art Museum.

For those who like to draw, Rachel and artist/art teacher Matt Dickson host the monthly Anti-Art School event at the Lost Leaf bar in downtown Phoenix. Using the types of non-traditional models you might find in either of their work, this is a great event for those who want to draw outside of the box, while in the company of other artists who like to explore and create.

“Knowing the mechanics and complexity of oil painting, Rachel’s work is humbling in her technical prowess and ability to include narrative in her work. It’s rare that you find both in a contemporary realist artist.” – Matt Dickson

Dickson, also an exceptional painter, is a huge supporter of Rachel’s work. Whether she is creating art, tending to her tiny urban farm or competing with other fast-fingered members of the pinball league she is involved with, there’s no question that Rachel Bess will be doing it with her combination of a passion for life mixed with a fight to the death.