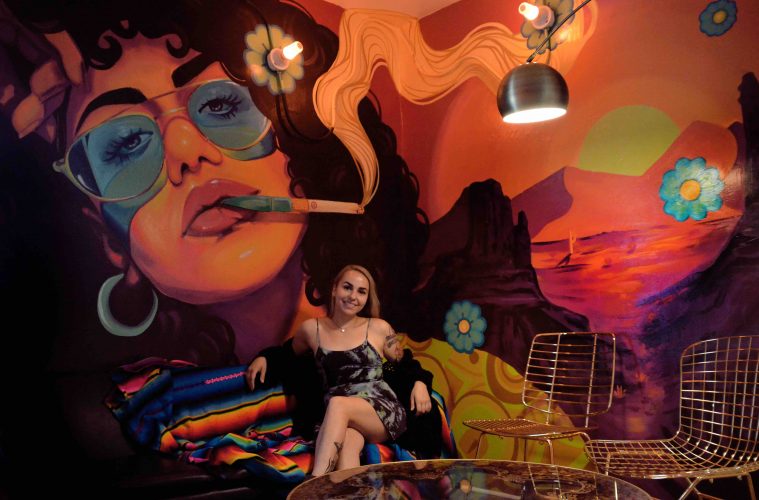 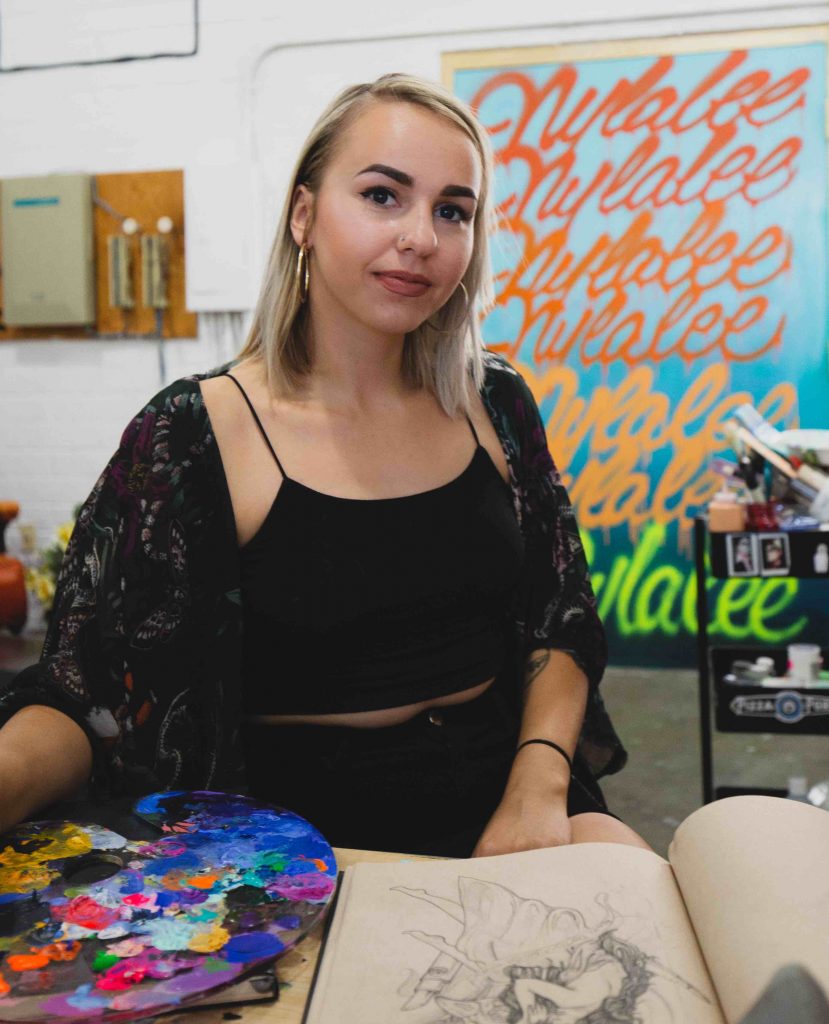 A bright and prolific artist who has become a figure in the Phoenix art scene seemingly overnight, Nyla Lee has been adding her colorful portraits to the scenery around metro Phoenix for the past two years. Her striking pieces have only recently started appearing on walls, but they’re already becoming as recognizable as longer-standing public art pieces. At this pace and with this skill level, it’s only a matter of time before her art career is launched to new heights.

We meet at a downtown café a few days before First Friday. Nyla manages to squeeze in a small amount of time to talk before heading back to her current work in progress, a tall mural featuring a young woman cradling a tiger and a bouquet of flowers, all in bright, almost neon colors. Located on a large outer wall of the Churchill, a multi-business, primarily dining space made mostly of shipping containers, hers is one of several murals that have appeared over the past week. “It’s called 1½ Street, and it opens on this First Friday – ten artists with ten new murals. I’m so happy to be a part of that, and I got one of the tallest walls! I’m next to Breeze and Lalo. It’s crazy.”

A couple of years ago, Lee’s work was virtually unknown to the public. Shortly after a mural went up on the side of Tacos de Juarez on 7th Street and Roosevelt, her brightly colored faces started appearing on more and more walls around downtown. Lee insists that her very swift transition was an organic process. “Last year was the first that I started making money doing walls, and this year, my income has been just this. I talk to a lot of people, and I’m always telling them what I do and that I’d be down to paint their wall. It’s happened so organically that now I can just do this full-time.” 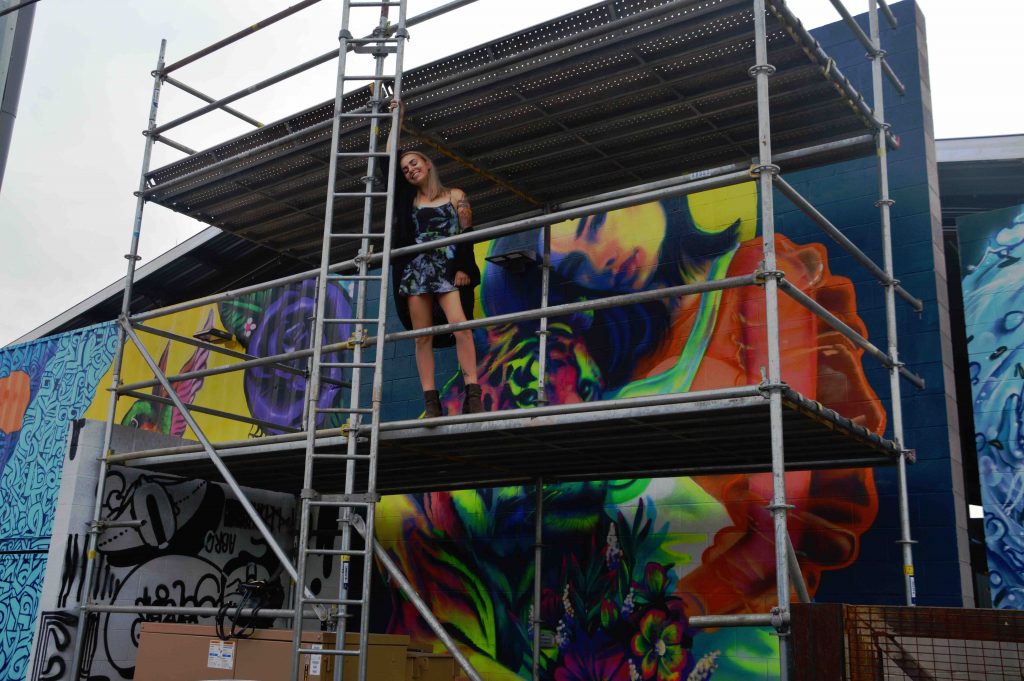 Her pieces almost always feature close-ups of serene and surreal humans, typically female faces on psychedelic backdrops. Lee insists that her process is less structured and more spontaneous. “I draw more by intuition and feelings than for a set purpose or intention. I aim for a unique color palette that creates a mood and emotion. I explained to someone the other day, it’s kind of like an aura of a person. You meet someone and you can feel what they’re giving off, if they’re sad and upset or if they’re happy and glowing from within. You meet someone who’s glowing and say, ‘I feel like you’re smiling all the time.’ I try to capture that through colors. It sounds so hippie, but it makes sense. It makes you feel good when you see it. I want to make ‘feel good’ art.”

Nyla had a very early introduction to the art world, including familial inspirations. “My grandpa was an artist. His pieces were these big black-velvet oil paintings. I saw those and his pencil drawings, and I just started wanting to learn how to draw. I also had teachers who drew portraits of me when I was in first or second grade, and seeing myself drawn, I was like, ‘Wow, you can do this? You can draw someone’s face?!’

“I went to school a block away from Fremont Street. I felt like I was in a movie when I’d go there. Vegas is very bright lights and neon central. After school, we’d go to this place called the Emergency Room. It was a café and gallery, and seeing that, I thought, ‘People can have a studio here and have shows?!’ I didn’t know that was possible. It was awesome going to school down there and being a part of the weirdness of Fremont Street. I think that’s why I draw women, too, because it’s so focused on women.” 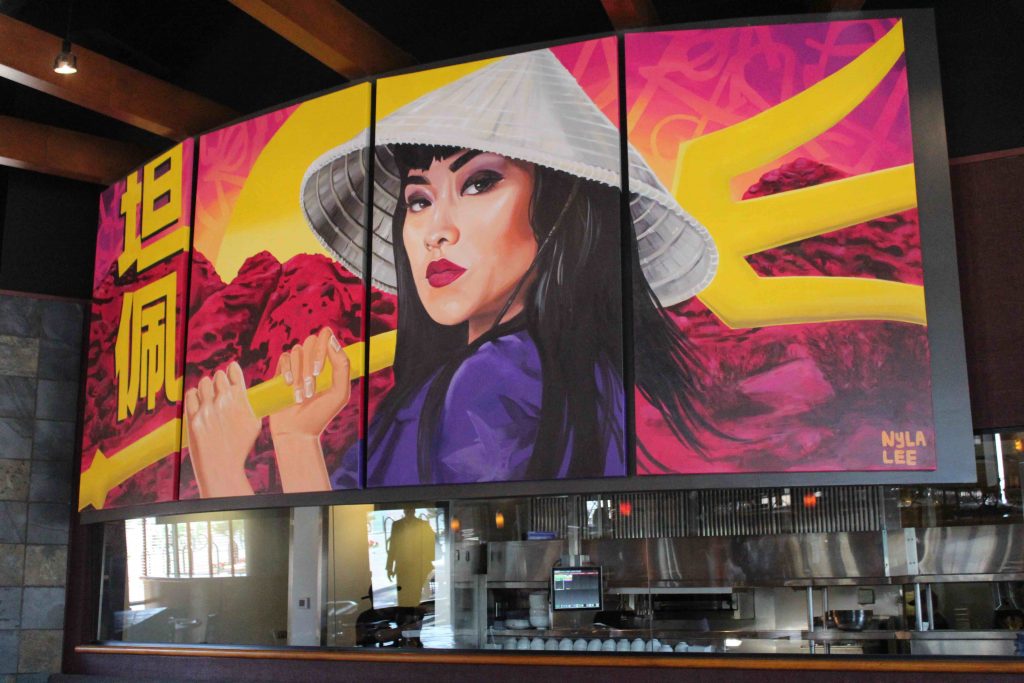 One of Nyla’s first large commissions came from the P.F. Chang’s restaurant chain, headquartered in Scottsdale. The creative director of P.F. Chang’s found Lee through social media and approached her for the commission. “I did the Tempe location on Mill Ave., two 20-foot murals. I had seven days to both, and I did the first one in three days. After I finished them, they hired me to do their corporate office, where I did four large mural installations. I only had a month and a half to do all of them, and I got pretty burnt out. I painted for nine days straight and I was like, ‘Can I take a day off?’ By the ninth day, I was falling asleep on the scaffolding.”

For those who may not have seen her murals downtown or visited the P.F. Chang’s on Mill Avenue lately, Nyla’s work can also be seen on the cover of DTPHX’s 2019 map and directory. The cover features a female half-face with a nocturnal backdrop and a corresponding male face on the back. Her work will also soon be visible on Valley Metro light rail trains and at the light rail station on Central Avenue and Roosevelt. “I’m gonna be everywhere, and I feel so selfish right now. I’m like, ‘Someone take some, please!’ I definitely feel like I’m gonna get annoyed seeing my name.”

While she may have had a sudden burst of success, Nyla has no plans to rest on her laurels. She is as ambitious as ever in moving forward with her abilities. “I’m getting to really understand the medium, and now it’s like, ‘How can I elevate my story for a viewer?’ Street art is all for the public. It’s not just for the artist. It doesn’t need to be political or tell a story, it can just be something that creates an emotion, like, ‘Wow, that’s beautiful.’ Female portraits are where I’m most comfortable. I can do them in my head. Now I’m starting to really understand what I want to say and where I’m going with the pieces. I’m trying to reach this point with my art where it feels more abstract, where you can look at it and get lost inside it forever.” 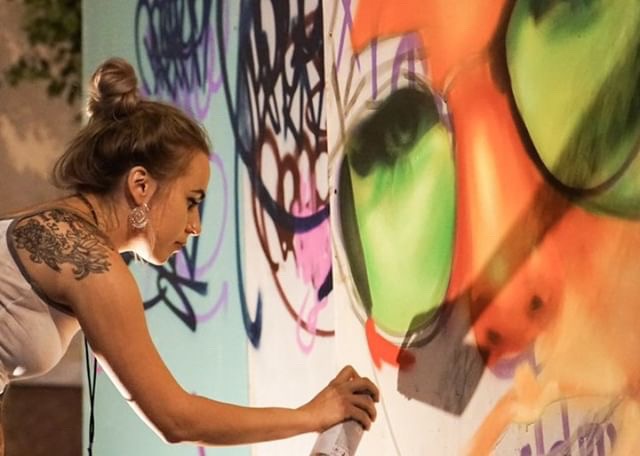 Nyla has found plenty of friends and inspiration in the local community of artists, including collaborators and mentors. I asked her to name a few inspirations, and several came to mind. “Antoinette (Cauley), she’s a hustler. I really appreciate the effort she puts into it, and she’s a great artist. Her last show definitely pushed an idea that no one else would touch. Breeze (Thomas “Breeze” Marcus). His work ethic and his style is so precise. He’s helped me out so much and given me so much advice throughout my art endeavors, and is always a great friend.

Lauren Lee has always been an amazing help. I worked with her on a solo show she was doing a while back. She’s given me so much business advice and helped me understand what I need to do to move my career along. This is the first time in my life where I’ve known this many people, and I feel very accepted. I’ve always been the only artist in my friend group, and now I have so many art friends. It makes me really think about art all the time since my friends are all artists, and I never get tired of it.”

While change has become a fact of life for the downtown arts community, with mixed reactions, Lee’s excited about the future, especially with Meow Wolf moving in. “It’s super dope to say, ‘Yeah, the Meow Wolf in Phoenix.’ It’s saying Phoenix is becoming an art hub. I was definitely not part of the beginning, but I’ve seen the progress from it being kinda chill and now it’s like, Meow Wolf!” 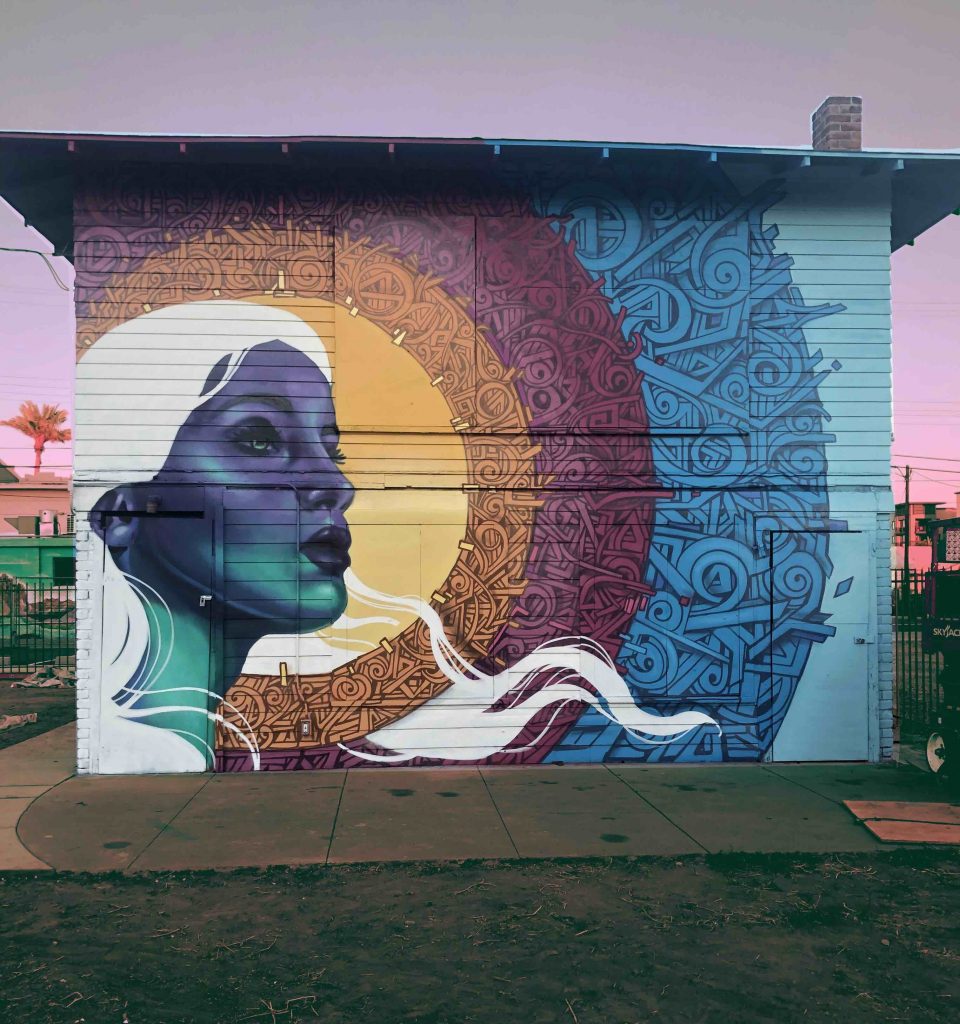 “True North is giving so many grants and commissions to artists. I’ve worked with Jonathan (Vento). Breeze and I did a piece (Pemberton House mural) for True North. Getting to know all of them was great. They took care of us the entire time, and after working with them, I’m so down for anything they have going on. These type of projects bring people and money into this community. I can see Phoenix becoming a bigger art hub, for sure.”

While painting public walls has been lucrative for Lee so far, her vision for the future also includes other types of artistic work. “I want to start focusing on solo shows and getting a body of work together for galleries. I also want to start doing installation stuff in my studio and creating immersive experiences. I have it, I want to be able to use it. Also, I just bought a podcast mic. So podcasts, stuff like that, too. I want to create more content about art and be more than just an artist.”

With this kind of brightness and momentum, it only seems a matter of time before we see more of Nyla’s vibrant creations in multiple forms inside galleries and around the city. 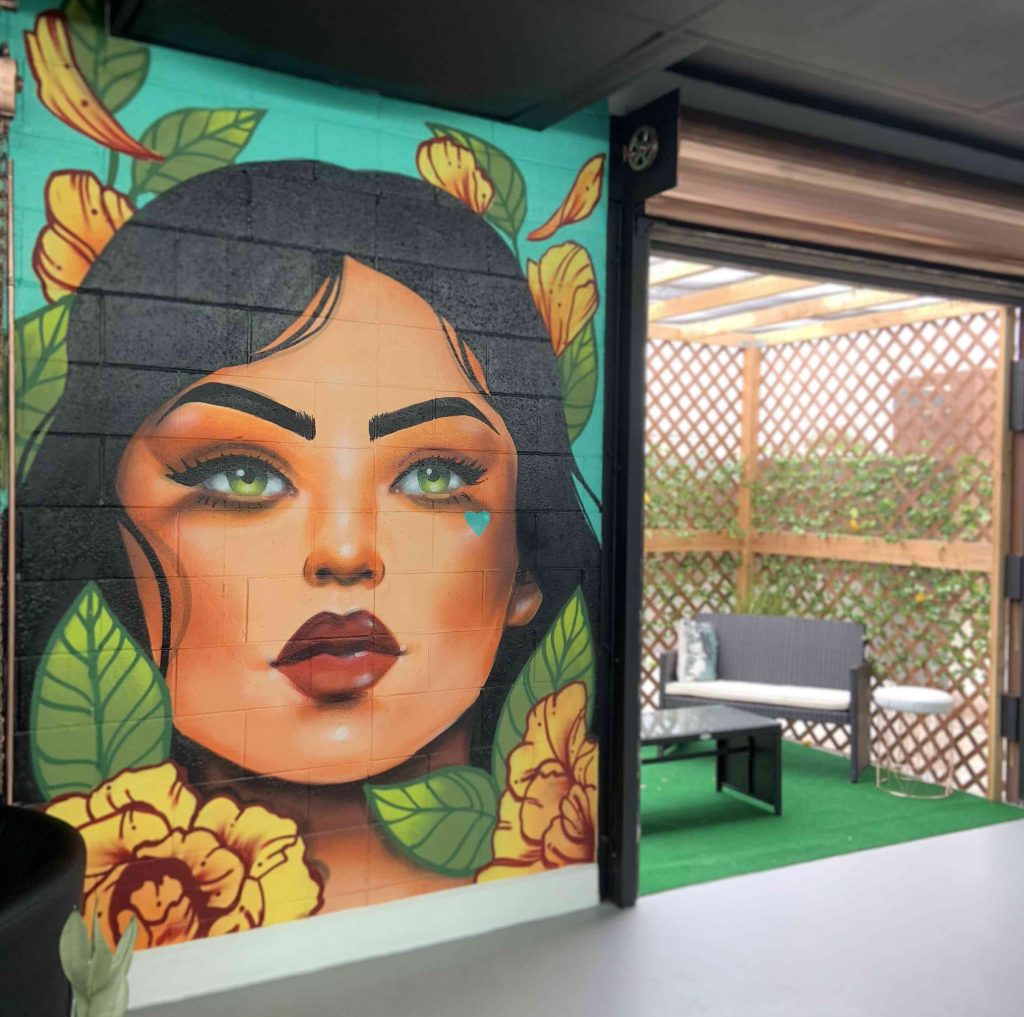