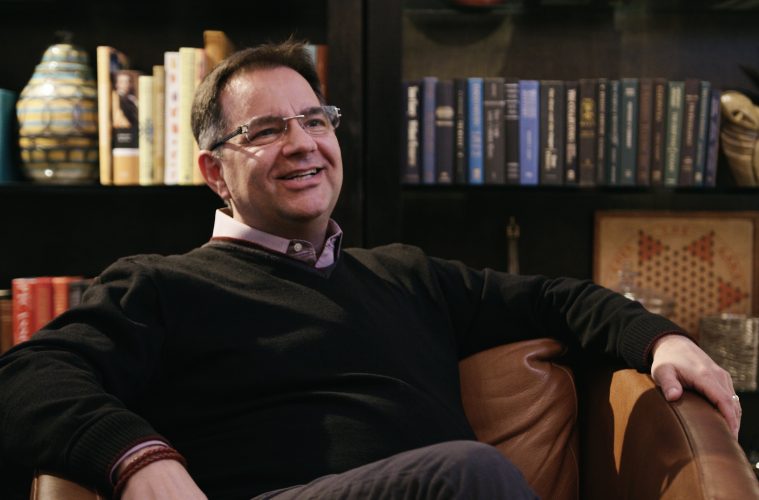 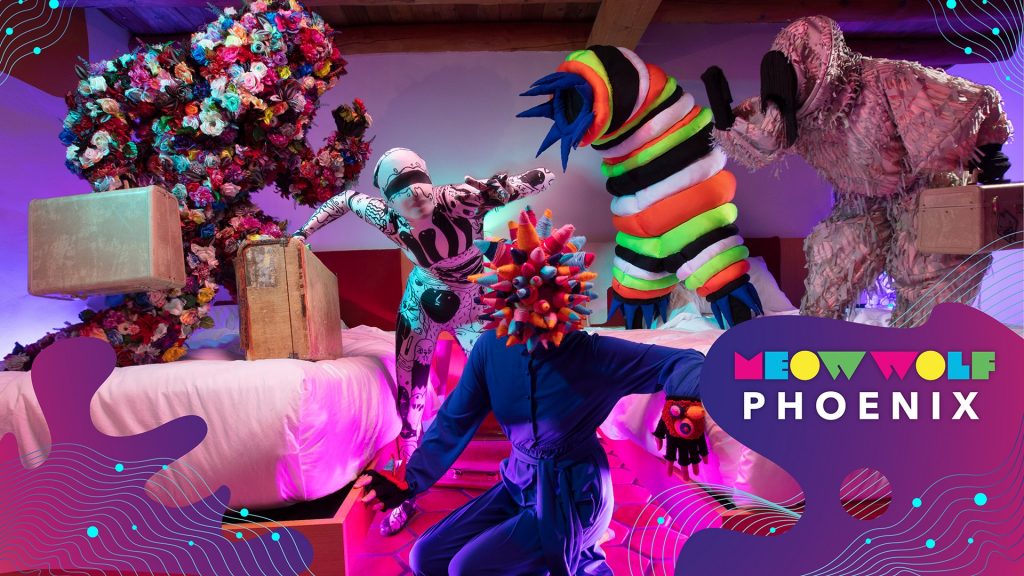 An otherworldly, massive object is preparing to land in downtown Phoenix. The thing in question is a proposed 400-room hotel with 75,000 square feet of exhibition/performance space, produced in a partnership between Meow Wolf, a Santa Fe–based art collective, and True North Studio, a development company headquartered on Roosevelt Row. While many questions are still unanswered about the impending arrival, one thing is clear: Phoenix is attracting creative enterprises from across the nation.

The announcement of this project, like so many new developments entering the area, has split opinions among artists and locals. Whether you’re angry about gentrification or excited about growth and new opportunities, True North Studio and its cast of makers and partners are bringing a slew of unique projects that will change the map – and skyline – of downtown Phoenix.

Jonathon Vento, the head of True North, doesn’t talk like most developers. Instead of an endless stream of acronyms and buzzwords, like “adaptive reuse,” he speaks of journeys and long-term commitments and uses unexpected phrases such as “brother from another mother.”

Having grown up and attended college in Michigan, Vento moved to Phoenix in 1985. Like so many others, he was forced to reinvent himself when the economy tanked in 2008. Tired of the traditional development model, he decamped for Europe, where he started a sustainable energy company called Blue Energy Partners, selling solar panels, wind turbines, and a cleaner future. Everywhere from France to Greece, he imbibed alternative approaches to planning cities. 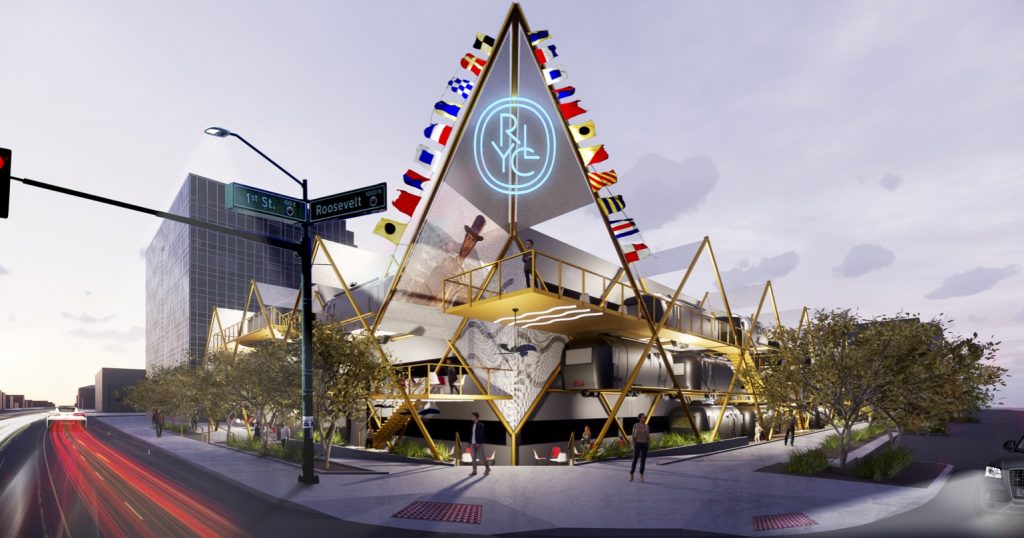 Then came the devastating earthquake, tsunami, and nuclear meltdown in Japan in 2011. Vento’s firm accepted a challenging project: to build a solar plant in Fukushima, not far from the site of the catastrophe. He says he’ll never forget seeing ground zero.

“There were no trees. There were no roads,” Vento recalled, his generally upbeat manner turning somber. “There were a few old, bent power towers. Then, as you walked back from that, you’d see a sort-of building. You thought it was a building, and then you saw it was just two walls.”

This wasteland contrasts strongly with what Vento remembers about the rest of Japan and Asia. In his four years there, Vento witnessed how they used every square inch of land, reduced waste to a level almost inconceivable in the U.S., and embraced their cultural uniqueness. All of what Vento saw affected how he thought about life and how cities function. “I love how in Japan they really let their freak flag fly,” Vento explained.

Eventually, though, Vento’s adopted home in Phoenix called him back, and he founded True North Studio, manifesting the ideas that had slowly been percolating during his years abroad. Vento soon encountered Wayne Rainey, then the owner of the monOrchid building, whom Vento describes as a “brother from another mother” and “spirit guide” for understanding Roosevelt Row. 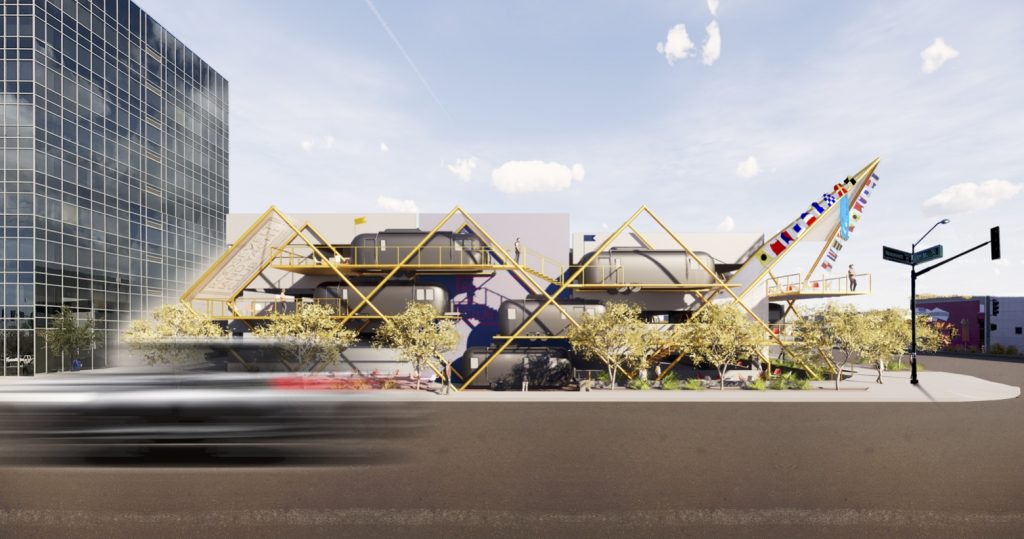 Earlier this year, Rainey agreed to sell the monOrchid building, housing a gallery, event space, restaurant, coffeeshop, and more, to True North Studio for $3.6 million. Foremost in Vento’s mind is the responsibility of preserving and growing the space that helped pioneer Roosevelt Row’s transformation into what it is today.

“I wake up every morning and literally one of the first things I think about is monOrchid,” Vento explained. “I feel a responsibility to grow it but not change it.”

Vento didn’t offer too many specifics about the future of monOrchid, but did mention plans to bring a new restaurant and retailers to the space. He also shared information on a number of projects that True North Studio is working on around the neighborhood.

In one, True North Studio recently installed a large-scale public art project on the east side of monOrchid. The 20-foot-tall sculpture of a dress form was constructed by Mike and Pat Murray, known as the Maker Twins. Their company, Spectacle, creates “interactive and experiential displays and immersive spaces,” according to their website.

The idea for the sculpture came out of a meeting between Vento and Steven Tepper, dean of ASU’s Herberger Institute for Design and the Arts. According to Vento, Tepper was speaking in a “stream of consciousness” manner and mentioned the idea of creating a large sculpture that local fashion designers could compete to dress.

Vento was intrigued and reached out to the Spectacle team, who quickly created a proposal and, upon approval, began fabrication. Vento says the piece honors the unique history of The Dressing Room, a restaurant housed within monOrchid that once served as the green room for drag performers at the neighboring 307 Lounge. That iconic bar closed in 2000, a decade and a half prior to its storied building being razed to make way for the iLuminate Apartments. 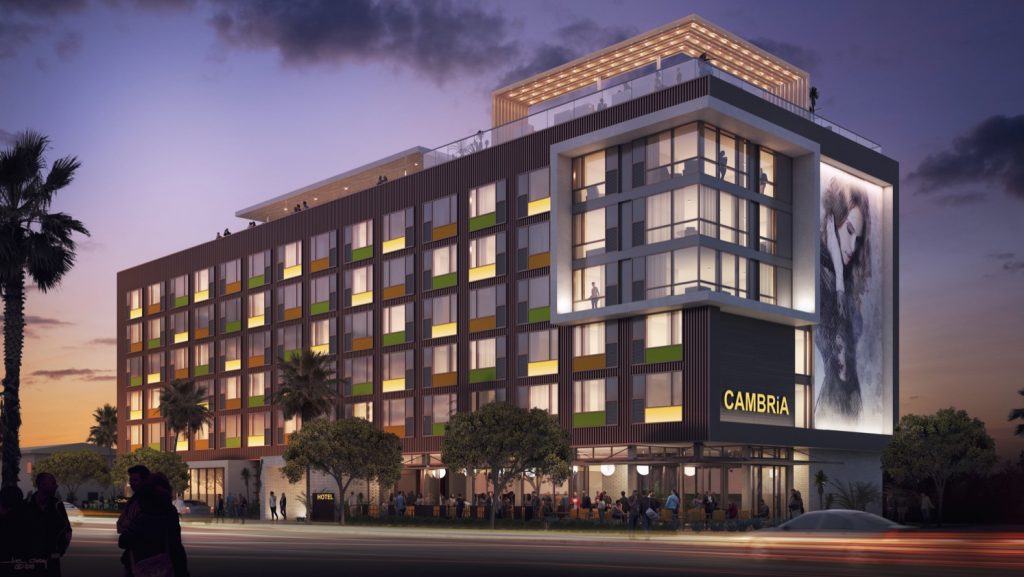 Another True North project Vento is excited about is the Cambria Hotel, a seven-story, 127-room hotel being constructed at 222 E. Portland Street. True North has partnered with Artlink Inc. on two RFPs for public artworks at the hotel. One is for an entrance and shade structure, with a budget of $100,000, and the other is for art to be featured in the hotel and reproduced on its exterior, with a budget of $20,000. The finalists will be announced early in April. Particularly exciting to Vento is Cambria’s rooftop bar. “I think it’ll be the hangout place in this part of the Valley,” Vento said.

The Roosevelt Land Yacht Club is another creative proposal from True North Studio. Intended to address the lack of affordable housing in the neighborhood, particularly for artists, the project plans to install a series of pre-fabricated units, possibly Airstream trailers, in a 15-foot-wide stretch of land between a parking structure and sidewalk at First and Roosevelt streets. Vento said the project, still very early in the development process, is partially inspired by the creative land use he observed in Japan.

“This is an arts district, and artists need to live here and be part of the community 24/7,” Vento said. “With a lot of the newer projects coming in, the residential units other developers are building are market-rate apartments, and the market is going up and up. One of our core missions is to have an affordable housing program for artists – but, as you can imagine, looking at the district as a whole, it’s not easy to do.”

And, of course, there is the hotel and exhibition/performance space True North Studio is developing with Meow Wolf, which Vento said could open as early as 2022. The Santa Fe–based art collective was founded in 2008. The group – who chose its name by picking two words randomly from a hat – has spent years building temporary immersive art experiences at galleries and venues around the Southwest and beyond. 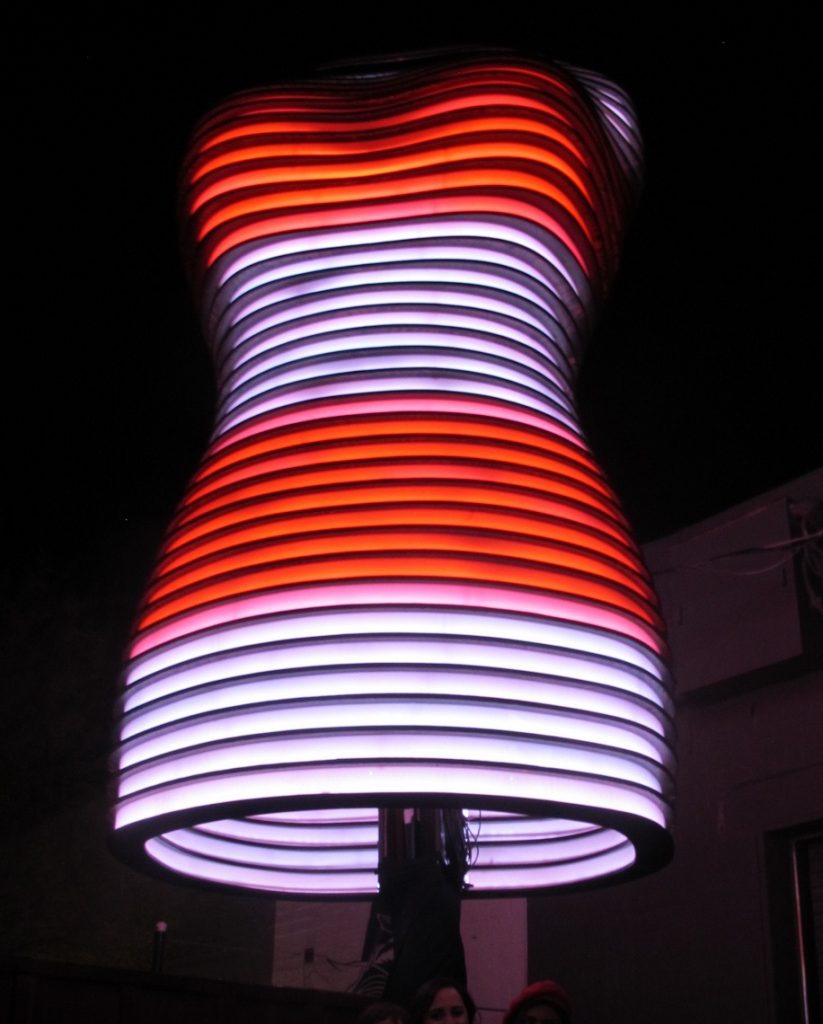 20-foot-tall sculpture at monOrchid constructed by Mike and Pat Murray, the Maker Twins

In March 2016, they opened their first permanent exhibition, the House of Eternal Return, in Santa Fe with help from author George R.R. Martin, whose book series is the basis for HBO’s “Game of Thrones.” Overflowing with psychedelic art – everything from musical mammoth ribs to controllable giant robotic arms to a time-warped Victorian house – the exhibition has been wildly successful, drawing its millionth visitor last summer. “We have been completely blown away by the response,” said Corvas Brinkerhoff, a co-founder and Meow Wolf’s senior vice president of experience and design.

Meow Wolf has begun to expand, as well, first to Denver but now with projects in development in Las Vegas, Washington D.C., and, of course, Phoenix. Brinkerhoff said the project in Phoenix will be “driven by dreams.” The Albuquerque Journal reported that the project will be called “The Dream Machine Hotel,” though that is still unconfirmed.

“It’s going to be about 300 feet tall. We’re going to create an iconic new presence in the Phoenix skyline that will feel like some otherworldly massive object has landed. The hotel is going to have 400 rooms that will be designed by different artists,” Brinkerhoff said. “With the 75,000 square feet of exhibition space, as with everything that Meow Wolf does, it will be super collaborative, and we’ll be working with probably hundreds of local artists, fabricators, and makers from the Phoenix area.”

Like any successful enterprise, Meow Wolf has drawn some criticism. Erin Joyce, the fine arts curator for the Heard Museum, wrote an article for the Brooklyn-based online publication Hyperallergic describing Meow Wolf’s expansion as worrisome and populist. Meow Wolf responded directly with a Facebook post defending their business model and pointing to their record of community support and engagement (which includes a grant to local venue Trunk Space). 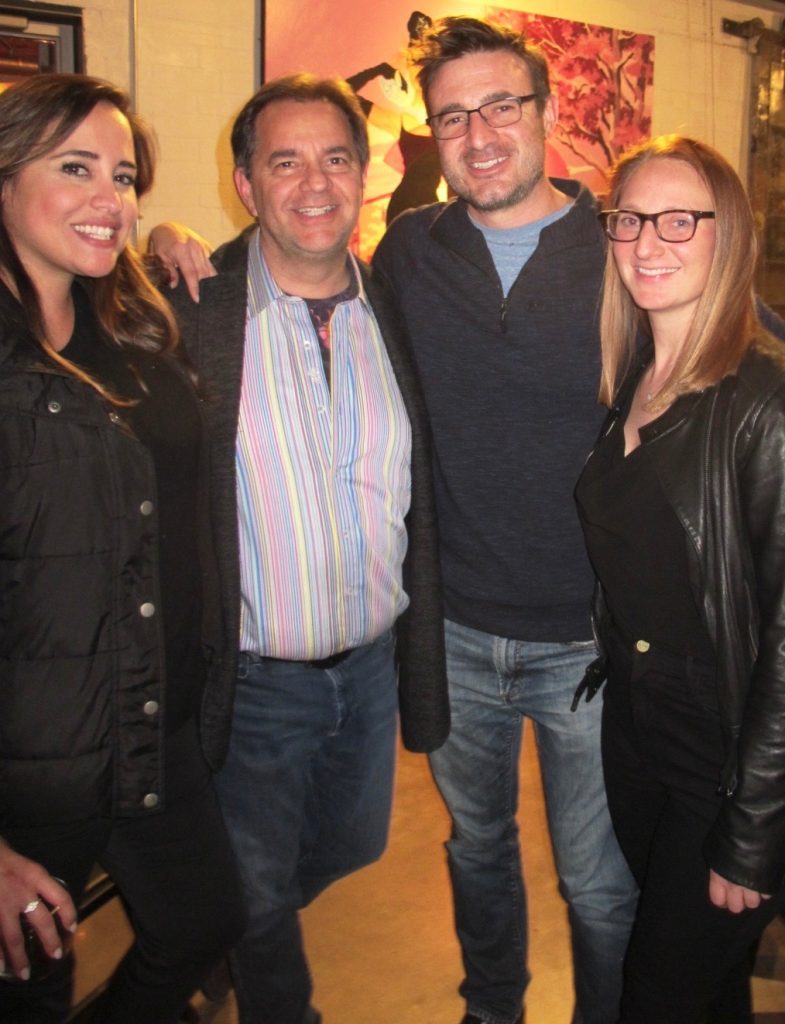 “We have a business model that can actually support artists,” Brinkerhoff said. “We hope we’re the beginning of a real sea change in how we value the arts and how we value creativity. In our pursuit of creating a successful business around this, it’s about making an example to the world that this is valuable.”

Local artists queried for this article expressed a range of reactions to the recent announcement by Meow Wolf and True North and the ensuing controversy. “To me, it’s exciting because it seems like more people from other places are looking to Phoenix as a place where there are opportunities to expand and grow,” Rowan Burkam, a local multi-media artist, said. “I think it’s encouraging as an artist.”

Hannah Irene Walsh, a local artist and educator who is a graduate of ASU’s MFA program, was more reserved in her excitement and somewhat disappointed in Meow Wolf’s reaction to Joyce’s article. “I’m excited, but I’m also anxious,” Walsh said. “The Hyperallergic piece said it was symptomatic of late-stage capitalism or whatever. I don’t entirely disagree with that, but then again, how the f—k do you make it in late-stage capitalism? By embodying late-stage capitalism.” 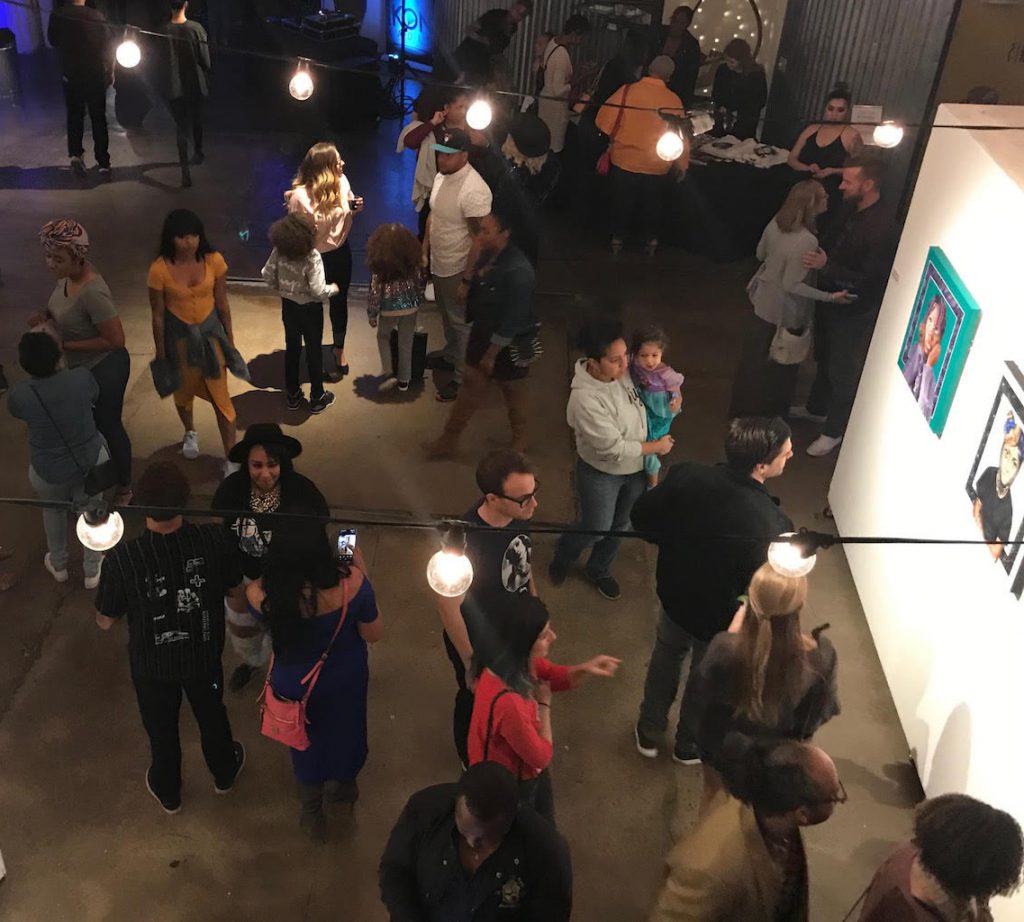 Grant Vetter, a program director for the Fine Arts Complex 1101 and a galleries director for ASU, was more skeptical about the project and what it, and others like it, mean for Phoenix as an emerging art market. “At the end of the day, I think of it as an entertainment venue,” Vetter said. “It’s not doing commercial sales in the traditional sense. It’s not particularly developing a collector’s base. I’m not sure it raises or lowers the city’s profile. If anything, it’s worrisome that it could become oversaturated by putting so many [Meow Wolf projects] so close within the region.”

Another common reaction among the artists and community members surveyed was that there’s just too little information to make a decision yet. “What they’re proposing sounds very significant, but we don’t know enough to know what it means in terms of the lift it can provide the arts and culture community or how they’re going to connect with local artists,” said Catrina Kahler, president of Artlink Inc. “There are so many unknowns right now that I think it’s hard to judge the impact.”