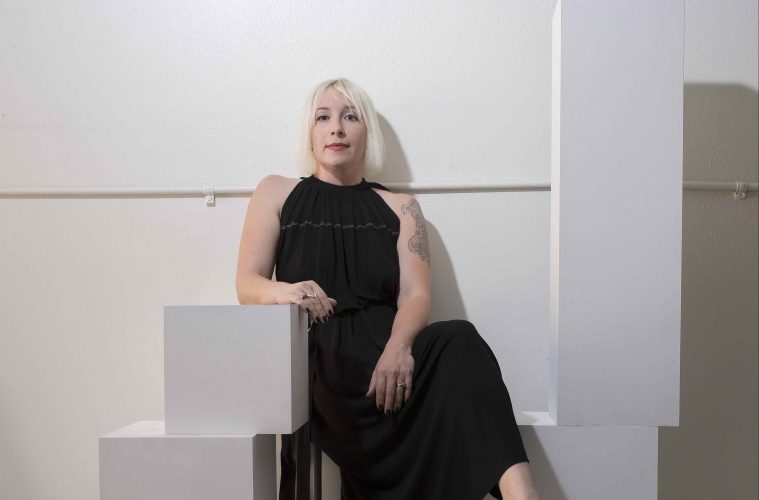 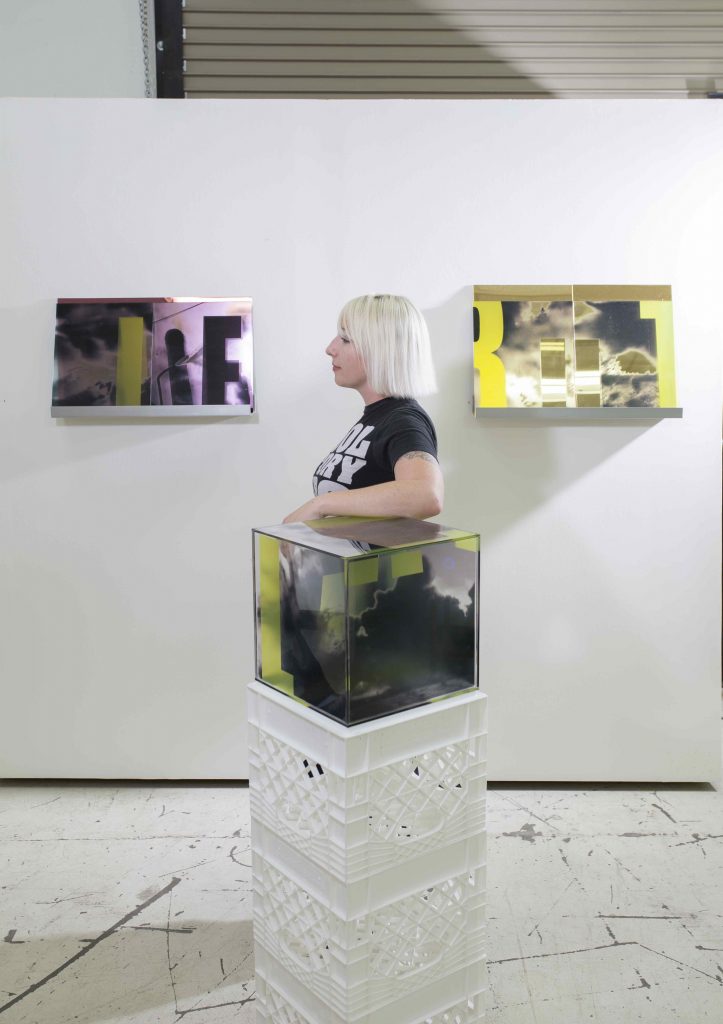 As an undergraduate student at ASU in 2013, I vaguely recall attending a panel at Phoenix Art Museum, moderated by then curator Sara Cochran, where Kristin Bauer and Emmett Potter spoke about art in Phoenix and the relationship between art and politics. They were joined on stage by Peter Bugg, Kim Larkin, and Kade Twist of Postcommodity. I can’t regurgitate any specific kernels of information from the discussion that ensued, but I do remember it having the effect of my beginning to understand what it could mean to be an artist in Phoenix.It reflected for me a discourse that existed in public space, outside the relatively structured environment of the university.

Flash forward to 2015. I had been out of school for a year, was waiting to hear back from MFA programs, and had been writing profiles on local artists for Phoenix New Times. Bauer had been on my list from the very beginning, so I was thrilled when I had the opportunity to visit her home studio in Tempe. I had walked by SEEN, her public artwork for INFLUX Cycle 5 in downtown Tempe, dozens of times and, as an artist who did most of my work out of a spare bedroom, I was envious of her studio setup in the garage. We spoke about the trajectory of her work, her use of text and language, and her developing interest in the moving image. I had each artist that I interviewed write about their work in haiku format, and I remember that Bauer got a kick out of it. 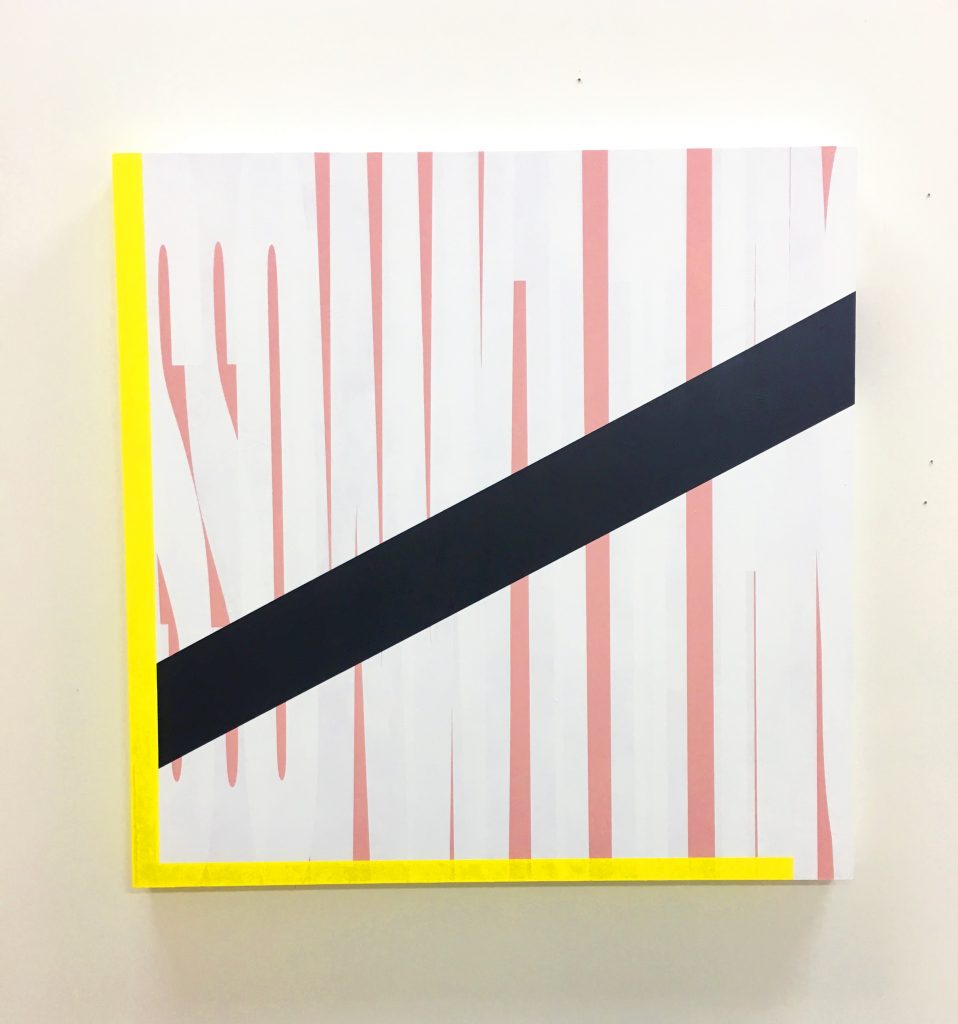 “As Within” polymer pigment on panel

For those unfamiliar with Bauer or who need a refresher: she studied painting at ASU before going on to study psychology and expressive arts therapy. She has exhibited her work at numerous spaces here in metro Phoenix over the years: Eye Lounge, Modified Arts, Mesa Arts Center, and Phoenix Art Museum, to name just a small selection. Her work was recently included in “In, On, & Of Paper” at Bentley Gallery and can currently be seen at Tempe Center for the Arts as part of “Retro Reaction.” Bauer has been up to a lot over the past several years, with exhibitions throughout the U.S. and in Australia and Chile. I’ve been able to follow along partly because Bauer’s work is well-built for consumption in the age of social media. It’s bold, graphic, and sleek. Its often square or cubic format lends itself nicely to the gridded surface of the screen.

Now that her children are a bit older and in school, Bauer has relocated her studio to a more spacious warehouse unit in Tempe. It was a fitting transformation for her. After completing a residency at Vermont Studio Center in 2015, Bauer found that the work needed room to move around and exist in dialogue with space. The anchors of her work are still there: her investment with language (Bauer published poetry before ever hanging a painting), an interest in history and psychology, and a reliance on montage and modular forms. Bauer has since opened the work up to abstraction, honed in on the language of the image, and further situated her practice in the context of the present moment. 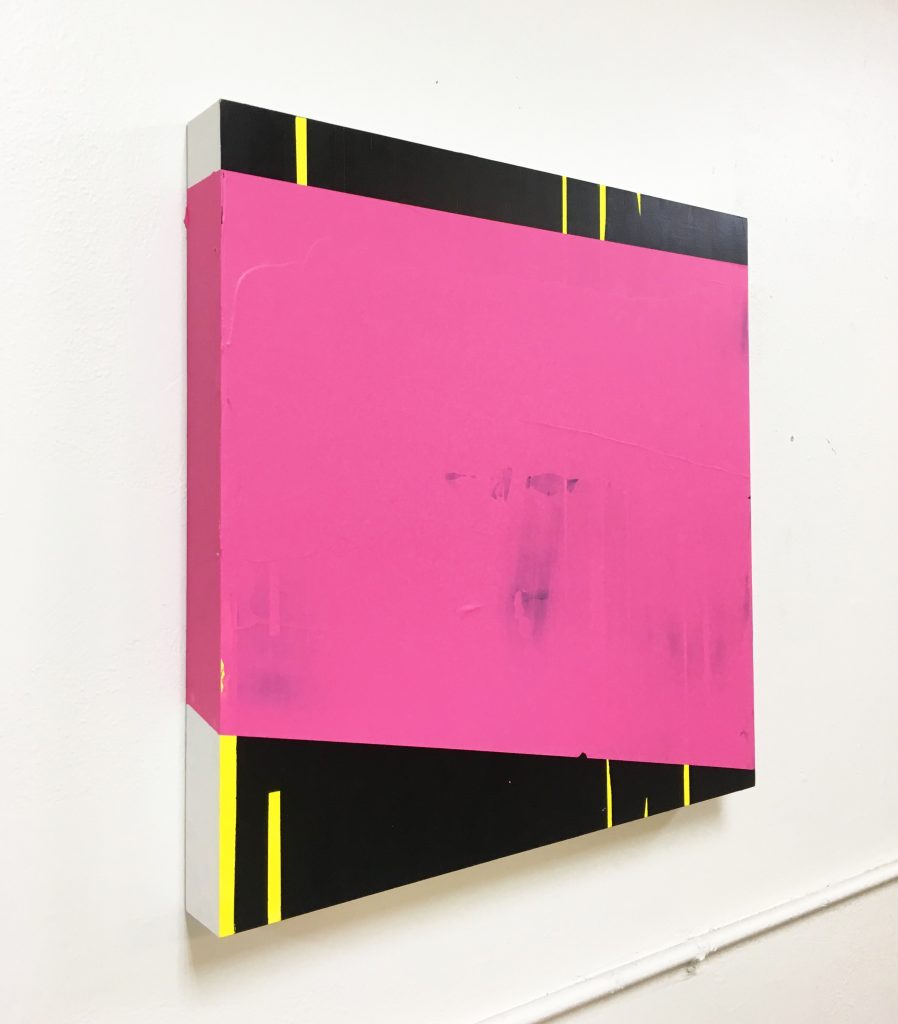 Bauer’s stature in the arts here involves wearing many hats. Outside of producing her work, she’s curated exhibitions and published writing on art, and she serves on the board of the ASU Art Museum. Her artistic process is equally multifaceted. Along with hands-on work in the studio, Bauer spends time researching and gathering source material, editing and designing with computer software, and working with sign-making professionals and online services. Bauer’s source material – stills from silent films, quotes, and written words – undergoes a process of sublimation. Her works are enticing objects that seduce the viewer into looking and exploit the sensation of desire. Their glossy and reflective surfaces embody a sexiness that sells, and Bauer is interested in referring to exactly that structure. What makes us want something? What makes us believe something?

Bauer has a way of extracting aesthetics from politics, zooming in instead on the mechanics of consumption – not only of products but of ways of life. The sea of text and image that we find ourselves in is sprinkled with advertisements (intentional or not) that describe a plethora of possibilities but delineate our boundaries. Bauer adopts the cleanliness and crispness of form but shakes it up in such a way that it cancels itself out. We’re left without a context, encountering written and visual language that’s stripped down to formal configuration and emptied of content. 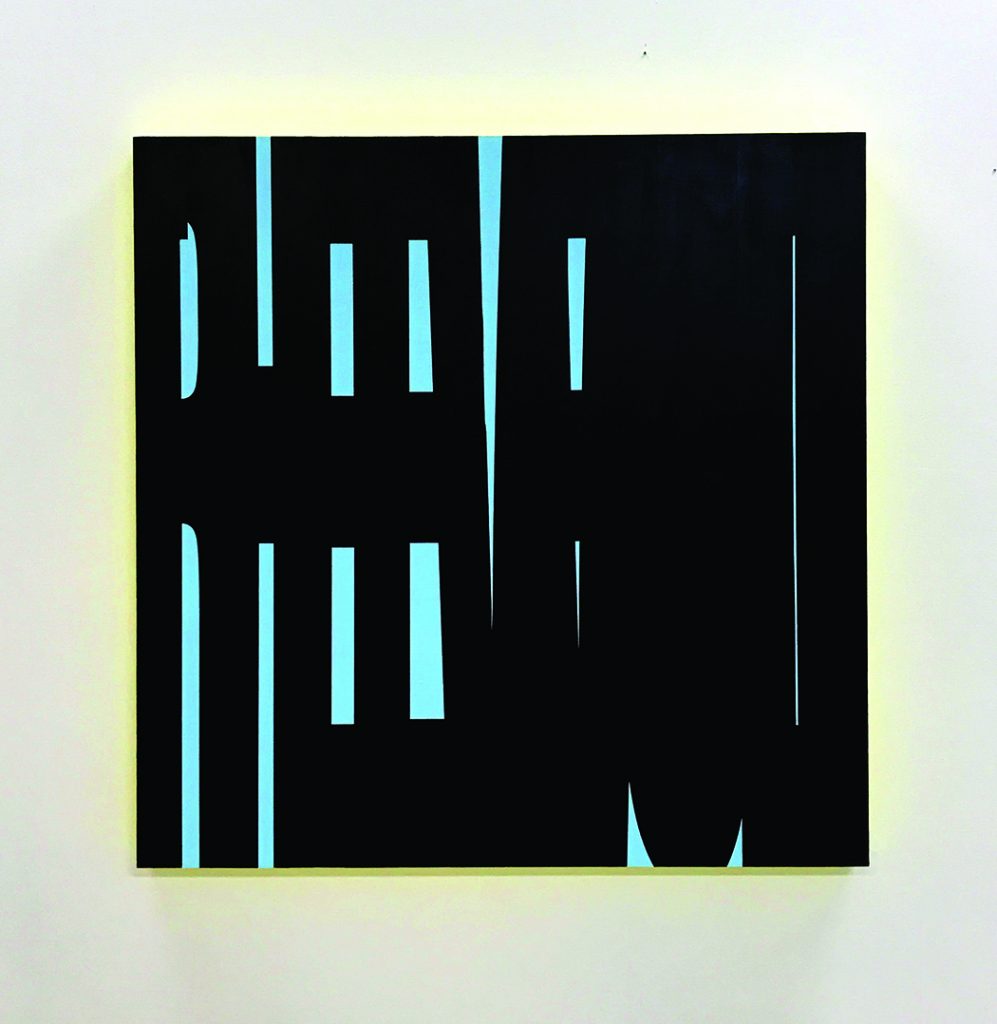 “The Future Will Have to Be” polymer pigment on panel

“I find junk mail to be really interesting,” remarks Bauer. “We have such a clutter of visual information around us that is incredibly influential on how we move.”Bauer brings up Hito Steyerl during our conversation, an artist and writer whose work examines how media and technology shape our experience of the world. We chat about the idea that there’s this sense of no-place that we find ourselves in globally. Our phones provide us with a bird’s-eye view, and that perspective in turn changes the way we perceive and construct space. An awareness of this certainly creeps into the work and provides a fresh way to think about Bauer’s work.

Her works, which lie in a playful nook between painting, sculpture, and graphics, are placed in situ throughout one end of her studio. Mostly produced over the course of the past year, these plastic surfaces – displayed on aluminum shelves and atop an artificial tableau of grass and milk crates – provide the interface on which our gaze lands. As we walk around them, blown-up fragments of words and images become shiny textured voids. Transparent and reflective, the works stage a relationship to both the body and space, recalling the surfaces on which we encounter images, specifically advertisements, in daily life: signs, posters, displays, and screens.

Bauer outsources certain aspects of her studio work to local shops and online services, but she combines these manufactured elements with gestures made by her own hand. “It’s important for me to have my hand in it in very small, subtle ways,” Bauer says. These human idiosyncrasies, embedded in the surface and expressed through the physicality of paint, enable the viewer to consider the object beyond its sheen. Her polymer pigment paintings refer to graphic print, but other layers refer to Bauer’s negotiations with issues of space and surface. 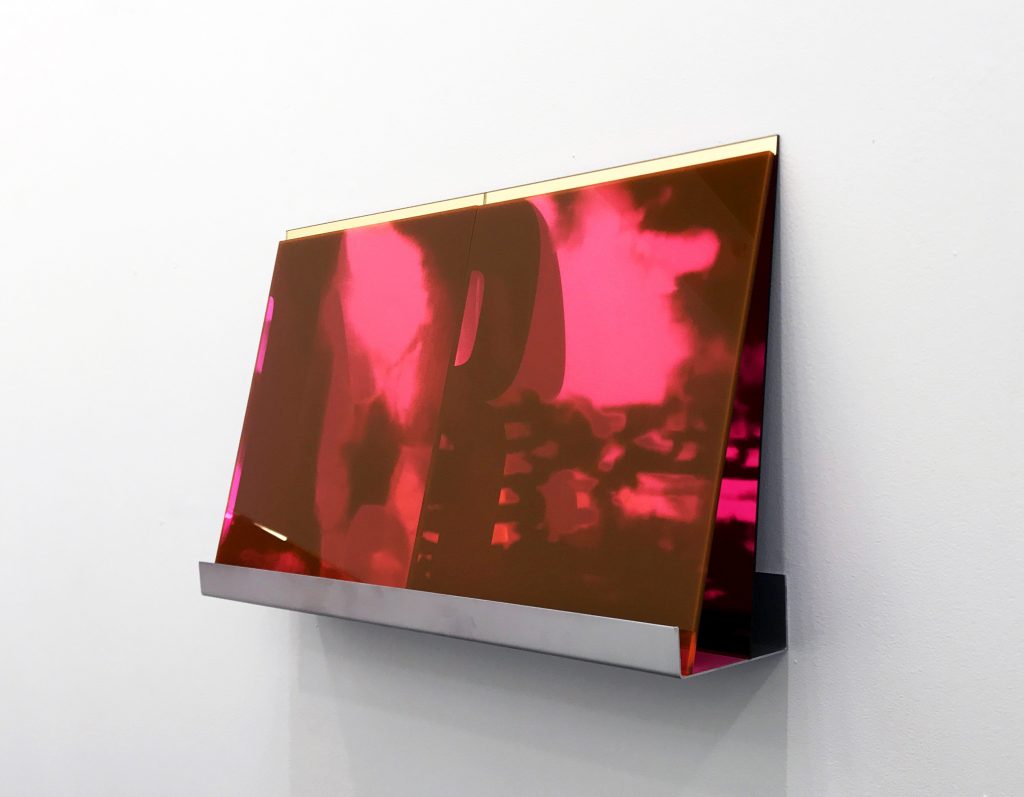 In working with text and image, Bauer tries to avoid didactics. “I try to use as little as possible and really edit it down, zoom in, or collapse it together in a way that throws more layers on than what’s being said.” The source material – stills from propaganda films and excerpts from psychological research, historic texts, and speeches – becomes so distorted and abstracted that it transforms into shape and architecture. Bauer’s use of negative space is analogous to the montage techniques used by these films, known as the Kuleshov effect. Sequences of images are spliced together in order to tell a story or convey a message, but they have the potential to be rearranged. This plasticity is what draws Bauer to written and visual language.

For her installation at Tempe Center for the Arts, on view through May 11, Bauer has placed cut vinyl signage throughout the building. One phrase, “ALL OUR GLORIOUS TOMORROWS,” is displayed on the exterior of the building, facing the lake. My own associations lead me to attribute it to a political speech or slogan, but the words are stripped from whatever their original context may have been. The words become empty, but that emptiness creates a space in which our own meaning can reside. 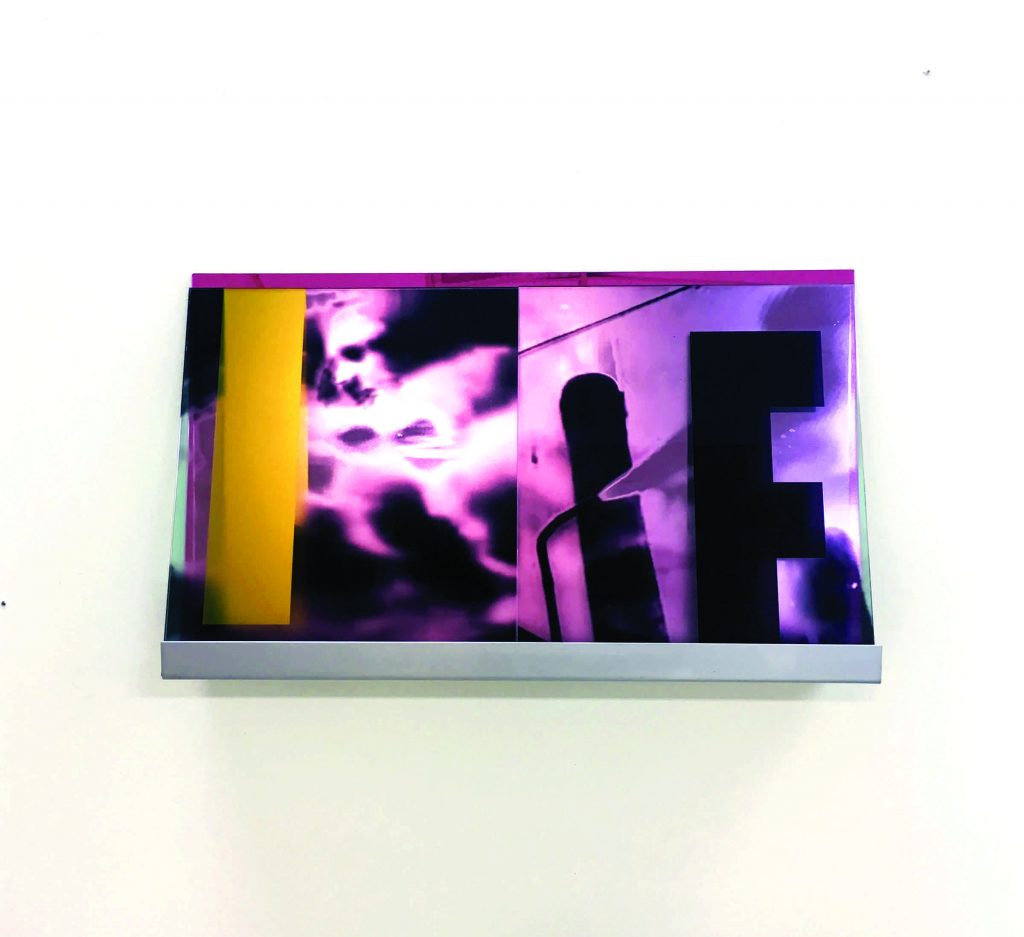 Bauer has quite a lot coming up within the next year. Her work will appear in issues of New American Paintingsthis spring and summer. Later this year, she will exhibit her work at Cheryl Hazan, the gallery that represents her in New York, in addition to co-curating a group exhibition with Brooke Grucella at University of Arizona entitled “The Snake Eats Its Tail.” She is working on upcoming projects with Phoenix Art Museum and will have an exhibition at MoCA Tucson in 2020. Bauer will also be a participating artist at FORM Arcosanti in May, a site fitting for her modular and cubic forms.

As in her works, Bauer appreciates the sense of mobility inherent to Arizona. “I like being an artist in the desert,” she says. “It’s funky.” Our conversation in her studio concludes with both of us talking about how important it is for artists to reimagine structures and hierarchies, and how, in wearing so many proverbial hats, we can attempt to evade the pitfalls placed along our paths. “Just seeing the totem pole within the art world,” says Bauer, “I think it’s important for there to be a reshuffling of all that.” 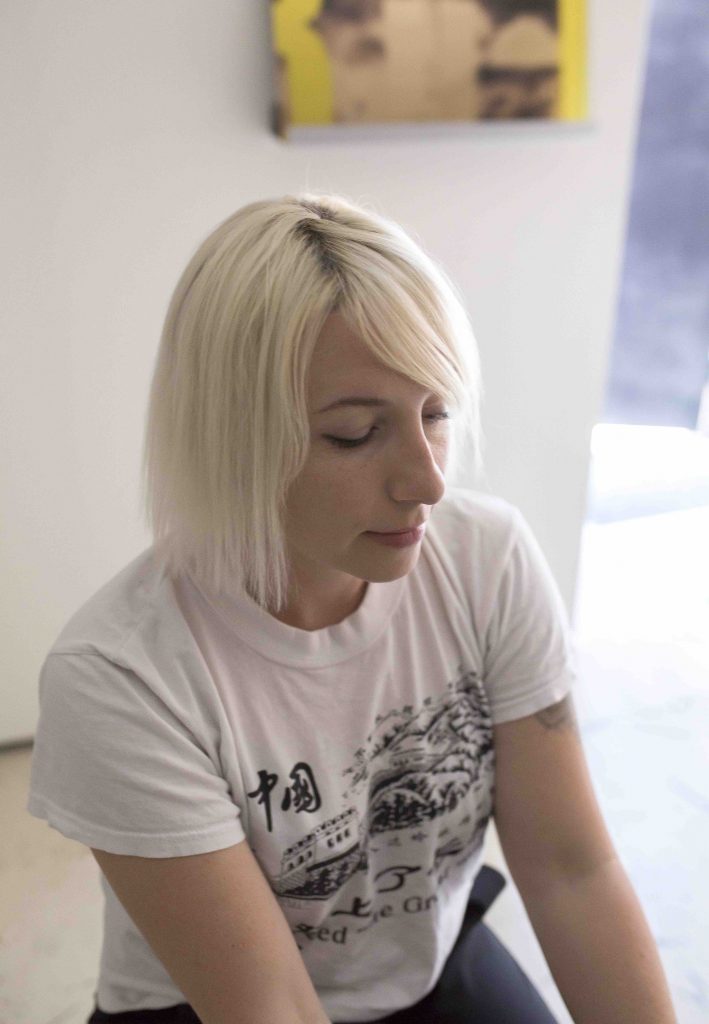