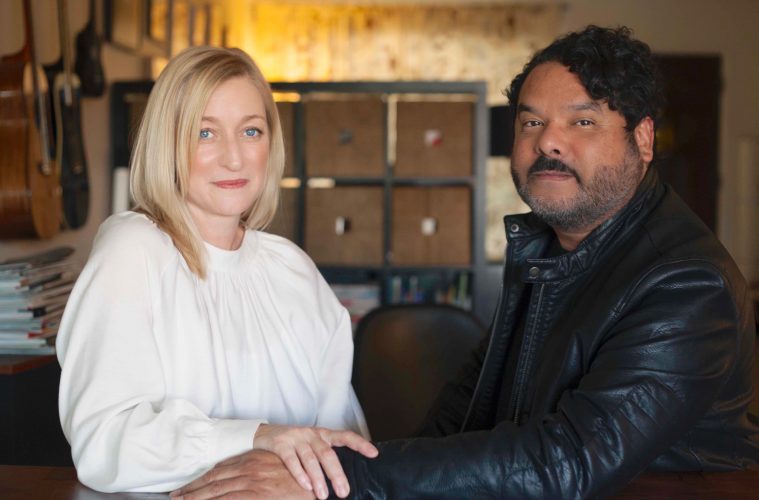 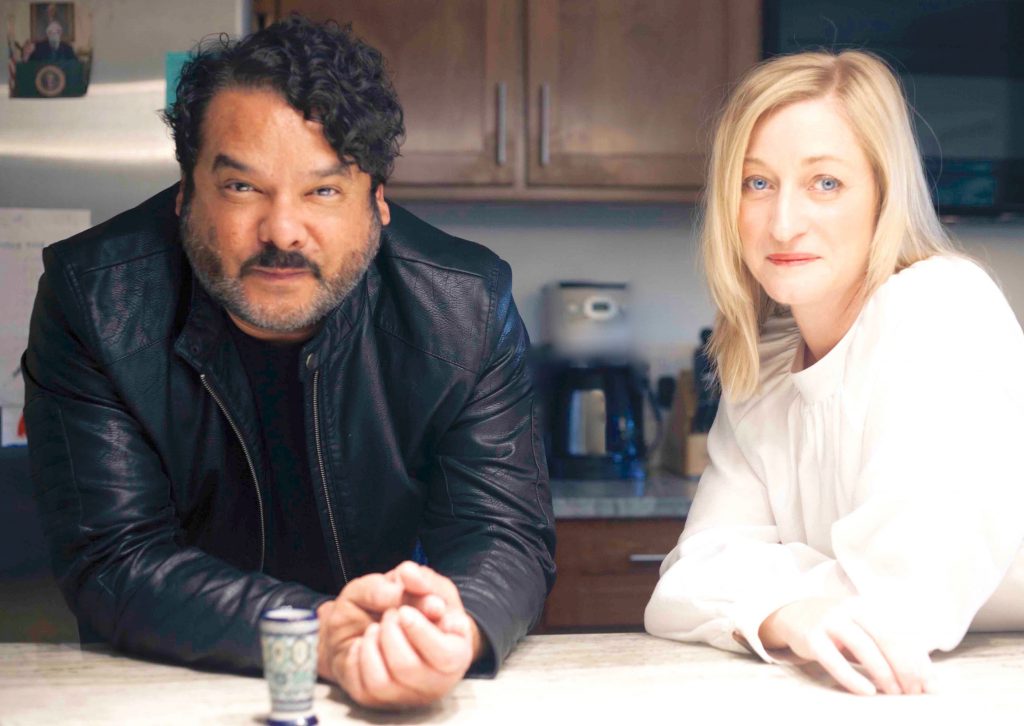 Jennifer McCabe and Julio Cesar Morales are the embodiment of collaboration, not only in their professional life but in their relationship as well. They’ve been married for eleven years and have two kids together: Enzo, five years old, and Prado, nine. Of course, they would tell you their children are their greatest achievement. However, their list of accomplishments in the art world is accumulating by the year.

They bring with them years of experience working in the arts in the Bay Area. Though McCabe and Morales have never worked together on a definitive project, they’re always bouncing ideas off each other and utilizing each other as a resource to better inform their curatorial and artistic decisions.

Most recently, both have been making their mark in the Valley. McCabe is the newly appointed director and chief curator at Scottsdale Museum of Art (SMoCA), having served as interim director; she’s also a PhD candidate in art history at ASU. Morales has been a curator at the Arizona State University Art Museum (ASUAM) for six years and continues to show his work nationally and internationally.

They both know the best way for them to excel in their respective positions is by working together. “For Julio and I, often it’s like ships passing in the night,” McCabe said. “If I need more time, then he steps up and does more things around the house or more things with the kids, and vice versa. So we are supporting each other all the time.” 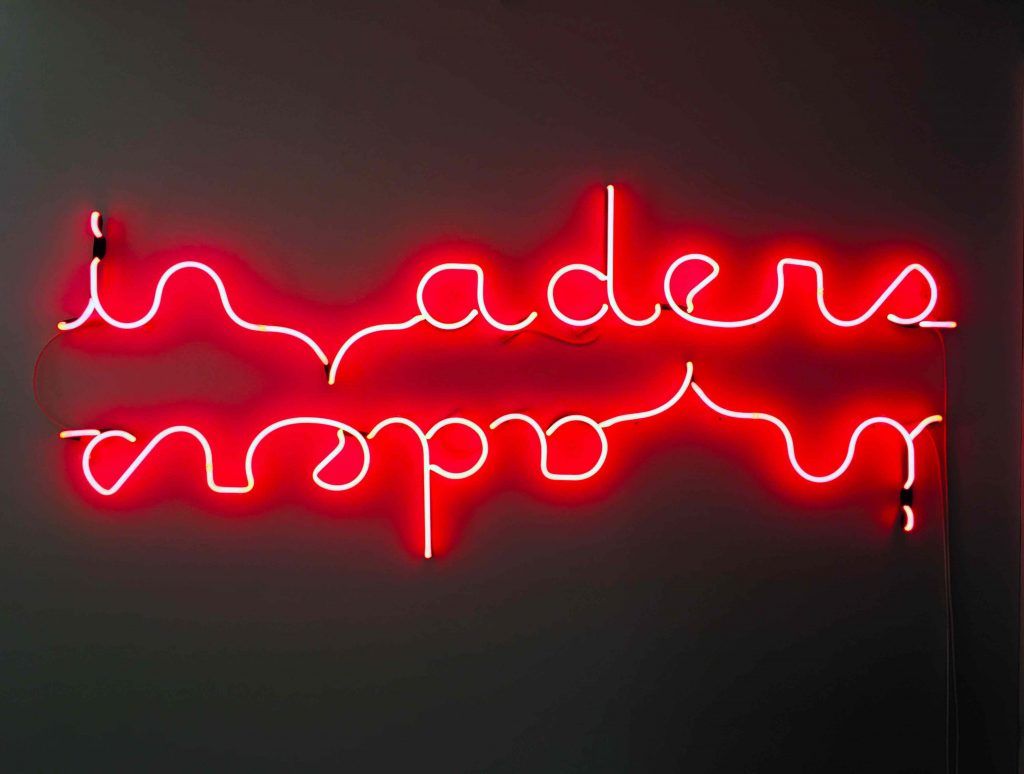 McCabe and Morales are each deserving of attention in their own right. Nonetheless, they were enthusiastic about being interviewed as a couple. To them, collaboration is the key to their marriage, and it’s embedded in how they approach art and life.

“We cook together nearly every night,” McCabe said. “We make an effort to cook real food and sit at the table as a family every night of the week. For holidays or larger dinner parties, we share tasks and often move around the kitchen together, but each working on our own thing. Like other aspects of our relationship, we support each other.”

McCabe was born in Grand Rapids, Michigan. Her father was in sales, and the family accompanied him as he moved in pursuit of furthering his career. They ended up in Atlanta, where she spent her formative years. She traveled to Arizona to attend ASU, majoring in photography.

McCabe didn’t want to be an artist, although she was passionate about art, so she studied art history at San Francisco State University. Initially, she wanted to attend the more prestigious UC Berkeley, but now sees the choice as a blessing. “It ended up being the greatest thing, because I realized later that Berkeley was pretty traditional in its art history and art historical approaches. At SFSU my professors were feminist-theory scholars, Afro-Caribbean studies and gay/lesbian art history studies. It was super diverse. I realized that was just where I wanted to be.”

Morales was born in Tijuana, Mexico, and grew up in the borderlands between Tijuana and San Diego. His parents were always busy, working multiple jobs, so as a child he cooked and took care of his little brother every day. He was studying to be a graphic designer but got into photography as a form of expression. “My more artistic side came from my grandfather,” Morales said. “He loved telling stories, so I moved from the idea of storytelling to using a camera to tell stories. I came to art through graphic design, through music and my grandfather’s ability as an amazing storyteller.”

Morales was the first from his family to go to college; he attended the San Francisco Art Institute. After graduating, he immersed himself in the burgeoning art scene, which at the time was filled with alternative and artist-run spaces, offering fertile ground for creative risk taking and experimentation. He also taught classes at local colleges. 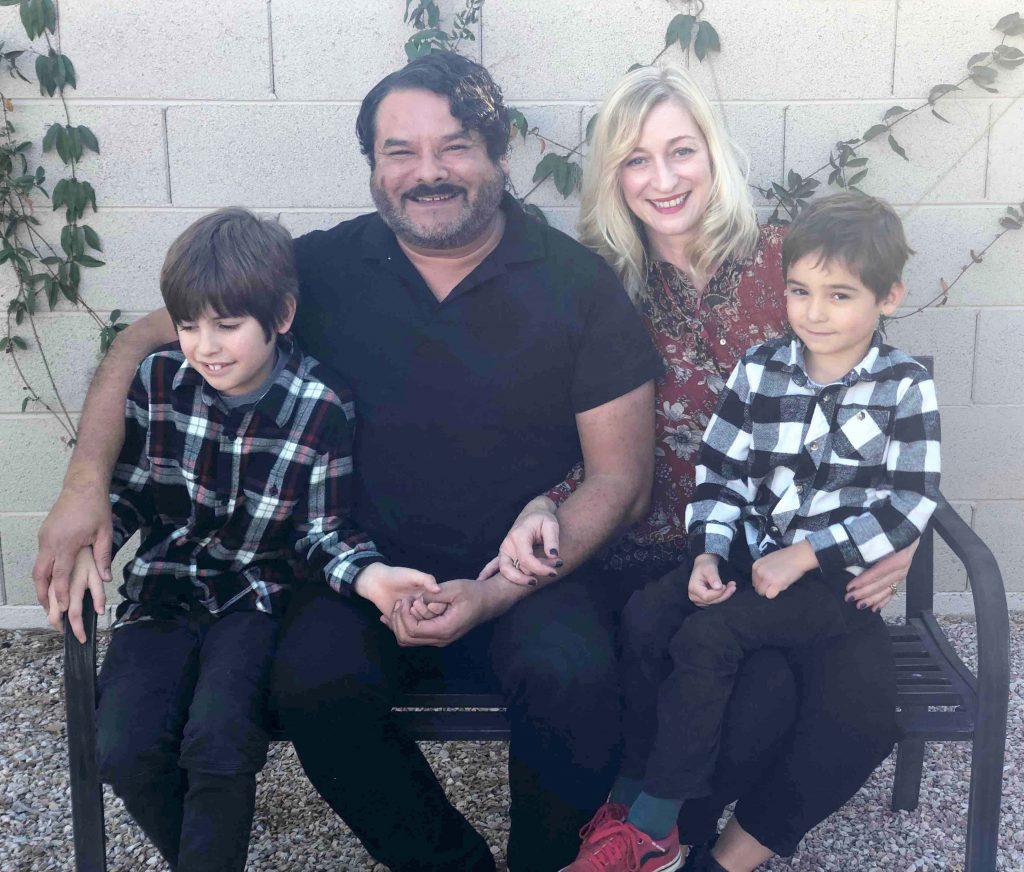 McCabe and Morales were both in the Bay Area for years before they met at New Langton Arts, a nonprofit art space renowned for its innovative programming and commitment to artists. McCabe was a curator and assistant director at the alternative space when she met Morales, who was brought in as an artist to work on a project.

Soon after, the couple married and thrived together in the San Francisco arts scene. Notably, McCabe served as executive director and chief curator of the Museum of Craft and Folk Art, and Morales founded an artist-run gallery space, Queens Nails, known for its forward-thinking programming. He was also curator at Yerba Buena Center for the Arts.

Eventually, the Bay Area began to change. “We were in San Francisco, and we started to feel the next wave of gentrification with Google and everyone else moving in, and all the prices were going like bonkers,” Morales said. “So we saw it as an adventure. There was this interesting position [at ASU], and they were really open to me curating more socially based projects, so we ended up here.”

An important reason for them coming to Phoenix was to effect change through the arts. Morales recalls that the first time they arrived here, “I almost got arrested and thrown in jail because I am brown. The only thing that saved me was her [McCabe] being a blue-eyed blonde, and there was a kid in the back. But the first words out of the officer were, ‘Boy, you better learn the rules around here.’ He threatened to take me to jail for thirty days, and I knew somehow I was at the right place.” 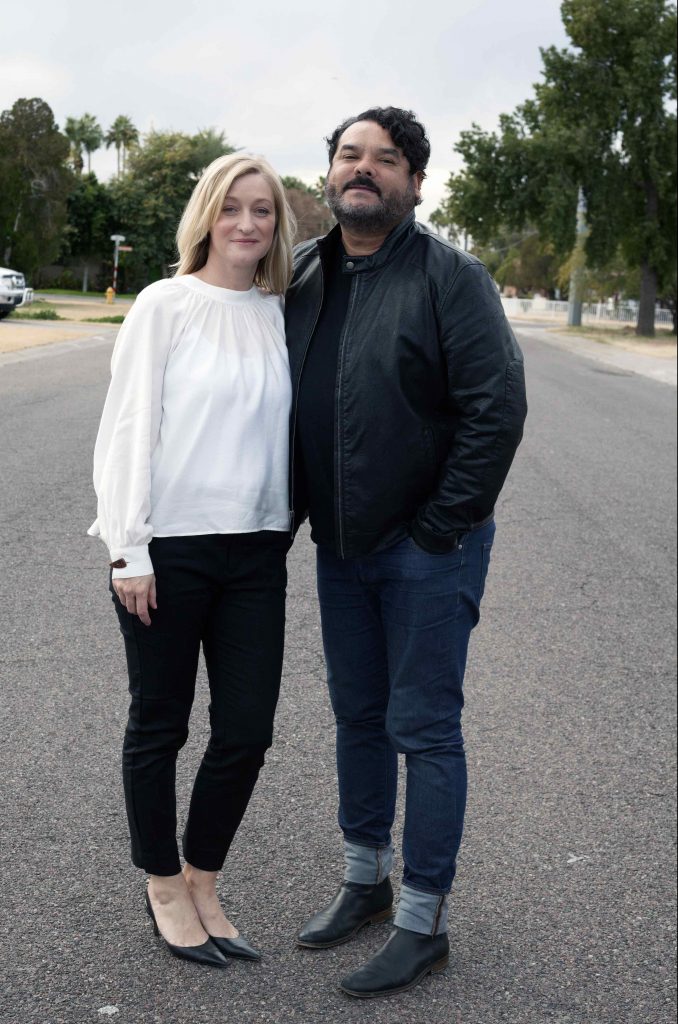 Both McCabe and Morales are continuing what they started in San Francisco, giving a platform to promising artists who have something substantial to say. “We met while working for an organization that was artist-focused, and I first came to know Julio as an artist,” McCabe said. “We came from that base of working with emerging artists, making new work outside the pressures of a commercial gallery or an institution, being very experimental. That was how I learned about curating and working in the arts. It’s something that I still hold very dear, something I really enjoy.”

“One of the things I love doing is commissioning new work,” Morales said, “helping emerging artists go to the next level with a lot of support and mentorship. Also working with artists that have a social-based ambition. You could say ‘social practice,’ but really art that is relevant in these times and this cultural climate we’re experiencing right now.”

For example, Morales curated the first U.S. show of video and performance artist Koki Tanaka, who later represented Japan in the Venice Biennale. Soon, Tanaka and his wife will co-curate a show entitled Rogue Objects, a selection of ceramic works from ASUAM’s permanent collection that have never been shown.

This kind of creative cultivation has become Morales’ modus operandi. The relationships he builds become full-blown projects, resulting in dynamic and important exhibitions that raise the cultural profile of Arizona. “I’d like to see Phoenix become what L.A. is now, and that’s part of what we strive for,” he said, “bringing artists that can show anywhere in the world, but they choose to come to Phoenix to work with us.”

Concurrently, Morales is working on his upcoming solo exhibition at the Phoenix Art Museum. He was awarded the 2018 Arlene and Morton Scult Contemporary Forum Artist Award, which recognizes a notable mid-career artist in Arizona. The prize includes $5,000 and an exhibition at PAM. 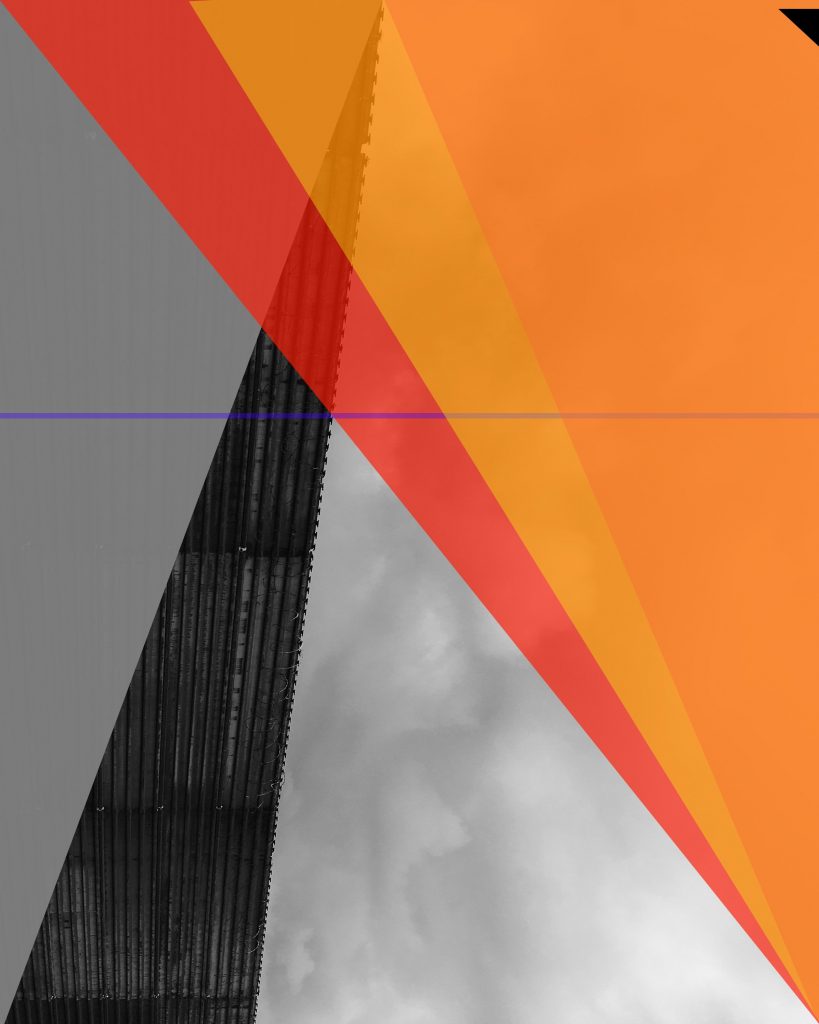 McCabe is finishing her PhD at ASU and has employed her talent as a grant writer to receive funding from the Andy Warhol Foundation that will support future exhibitions at SMoCA – including a show that ties into her dissertation, exploring performance in the landscape throughout several decades. But first, she has curated an all-video exhibition,Now Playing: Video 1999–2019,which will open during SMoCA’s 20th-anniversary celebration on February 15.

“In the exhibition, we have two big immersive installations – one by Candice Breitz and the other by Shirin Neshat, whose work I saw 20 years ago and has resonated really deeply with me on many levels. The piece is called Turbulent. It involves music, public space, women’s issues and a variety of things. I’m really excited to bring it here and to see it again. There are a host of other artists who are either known for video or started with video and moved on to other things.”

Collaboration has been crucial for McCabe and Morales’ relationship, in how they lead both their personal and professional lives. The future looks bright for this couple as they continue to shape the cultural landscape in the Valley.