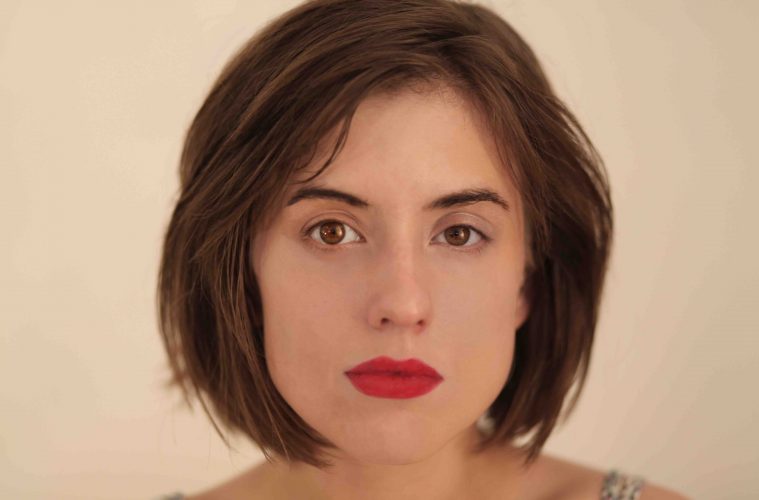 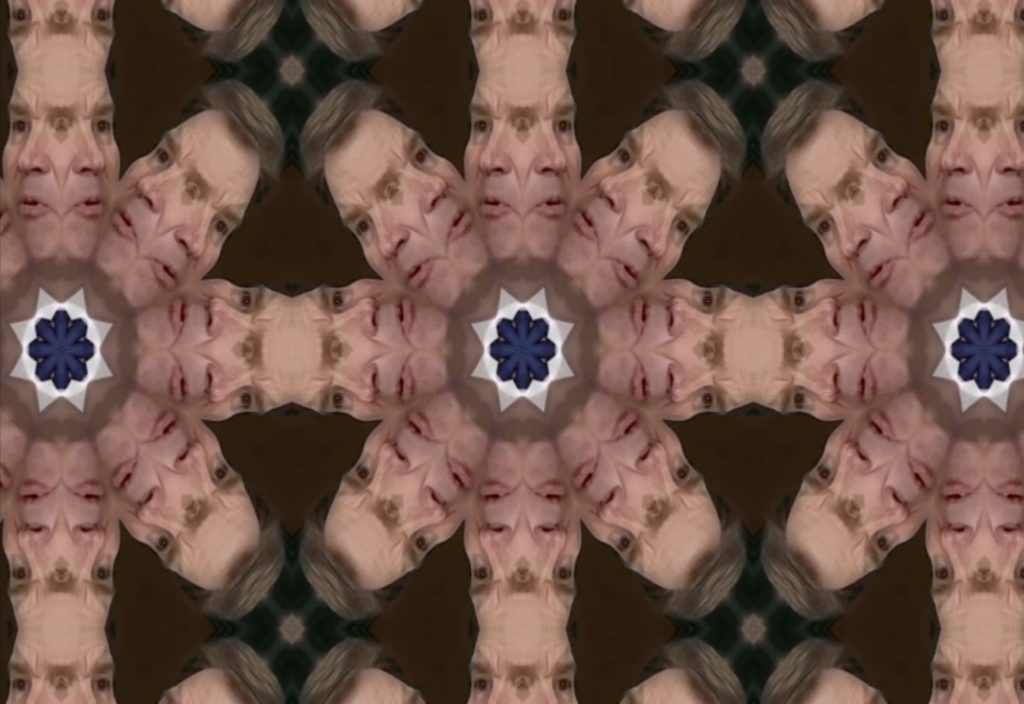 At the end of September, the Senate Judiciary Committee’s hearings on the sexual abuse allegations against Supreme Court nominee Brett Kavanaugh commenced. In the climate of the #MeToo movement, the hearings presented themselves as yet another instance of the prevalence of misogyny and rape culture in America. These allegations, however, came shortly before the midterm elections and were further galvanized by the fact that Kavanaugh was nominated by President Donald Trump.

Three women came forward with allegations against Kavanaugh dating back to his high school and college years, but only Christine Blasey Ford had the opportunity to testify in front of the committee. Dr. Ford shared troubling details about the assault and spoke to how terrifying an ordeal it was to have come forward. Kavanaugh, in his responding testimony, denied all accusations and blamed them on partisanship. Despite the severity of the allegations, Kavanaugh’s nomination was confirmed by the Senate in a 50-48 vote. 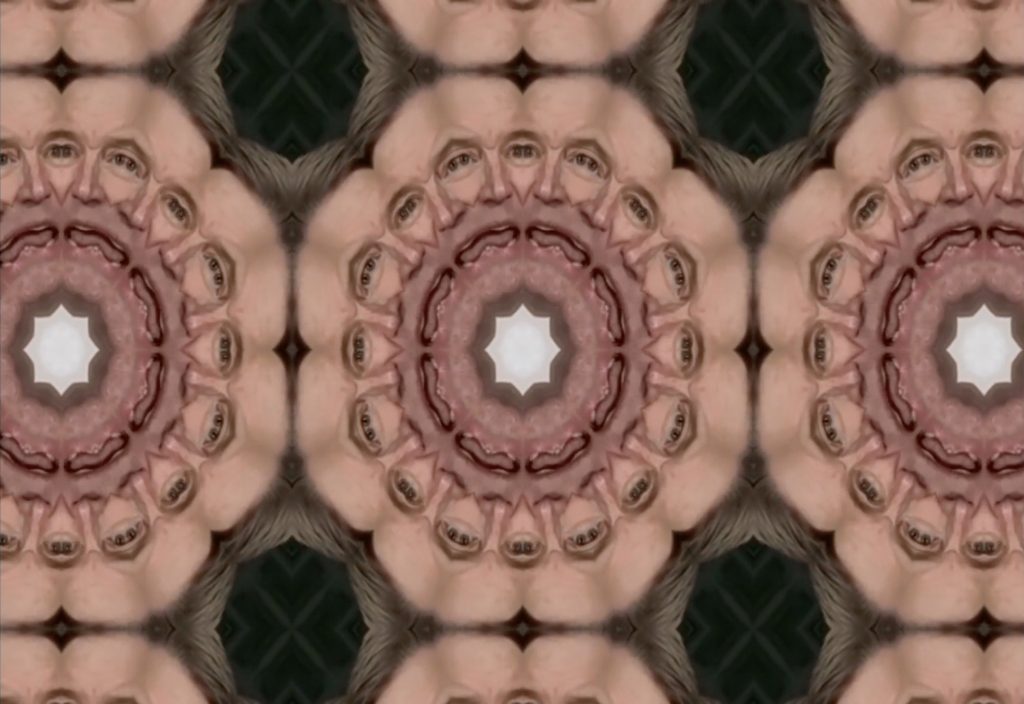 Malena Barnhart’s “He Said/She Said,” on view at Eye Lounge through December 16, is littered with references to the Kavanaugh hearings. Optics, one of two videos in the exhibition, features manipulated footage from Kavanaugh’s opening statement. Multiplying and transforming Kavanaugh’s likeness into a mandala-like configuration, Barnhart asks the viewer not only to meditate on his overt denial of the accusations but also, as the rest of the exhibition suggests, to recognize the problematic climate in which sexual assault thrives.

Several of the works in the exhibition were produced collaboratively. A karaoke video by Barnhart and Kimberly Lyle invites viewers to sing lyrics derived from a yearbook entry of one of Kavanaugh’s Georgetown Prep classmates – “You need a date/and it’s getting late/so don’t hesitate/to call Renate” – to the tune of Tom Petty and the Heartbreakers’ “American Girl.” The lyrics refer to Renate Schroeder Dolphin, a woman in Kavanaugh’s circle during his high school years who was repeatedly referenced in a sexually demeaning manner throughout the 1983 yearbook. The video represents the kind of taunting and catcalling that women are often forced to endure, a behavior for which men are hardly ever held accountable. 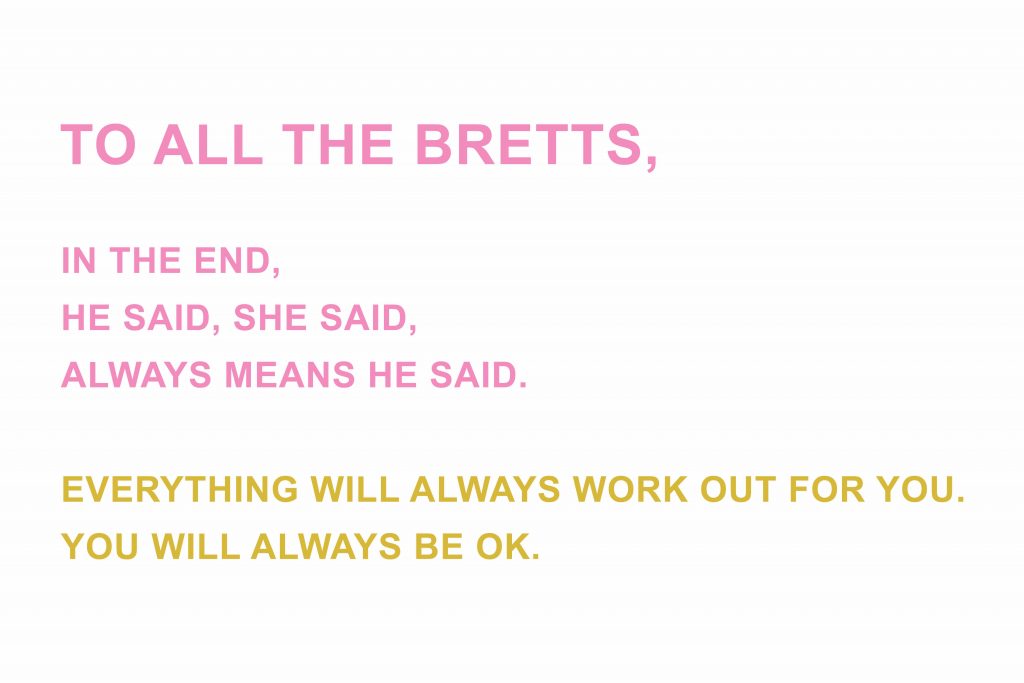 “TO ALL THE BRETTS” vinyl installation, 2018, variable

The front area of Eye Lounge features two vinyl wall works and a sculpture that point to the widespread systemic issues surrounding a case such as Kavanaugh’s. In Calculations, a large text work that adopts characteristics from data visualization and infographics, Barnhart displays the names of nine prominent men who have been accused of, and in some cases charged with, sexual assault. The repeated phrase “HOW MANY WOMEN =” is followed by “1 BILL COSBY,” “1 CHUCK CLOSE” and so forth. The number of times a name appears corresponds to how many accusers have come forward against each perpetrator. The already large-scale work will continue to grow throughout the duration of the exhibition. 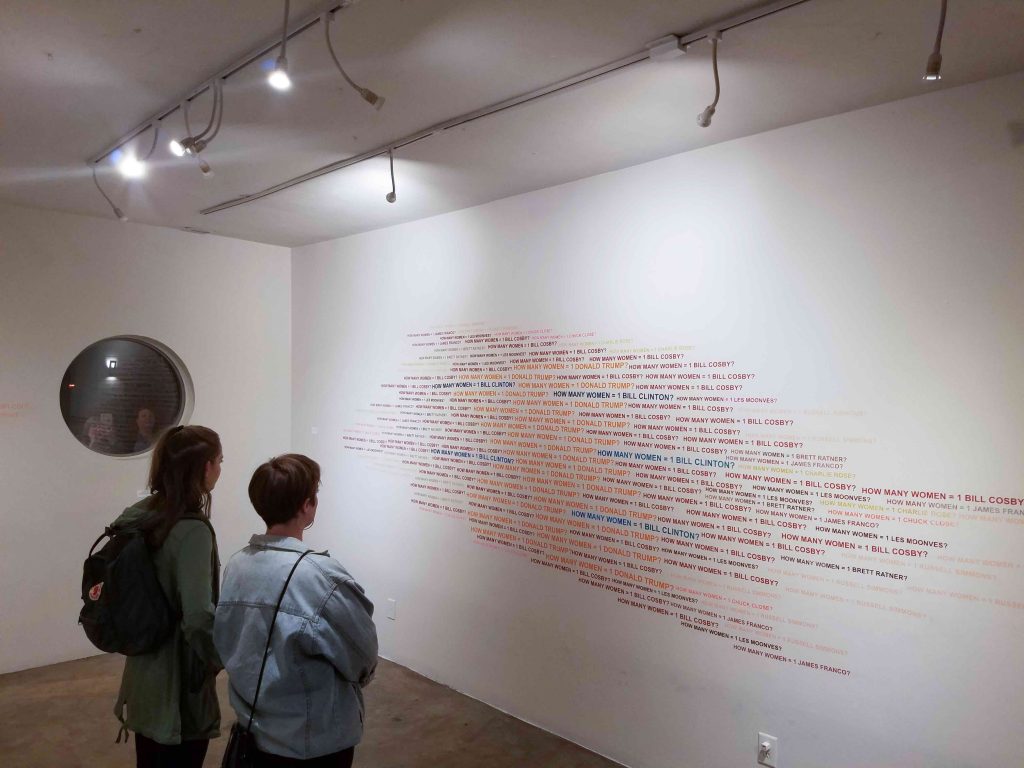 President Donald Trump’s name appears on the wall a handful of times, and his presence is also felt in a sculpture produced by Barnhart and James Bewley. An outstretched orange hand positioned on the wall at crotch height, the sculpture serves as a chilling reminder of the “Access Hollywood” tapes that surfaced before the 2016 presidential election, in which Trump can be heard speaking with Billy Bush on the subject of seducing (read: assaulting) women. The infamous recording is the source of the well-known Trumpism “grab ’em by the pussy.” The work playfully turns the notion of a presidential hand gesture on its head. 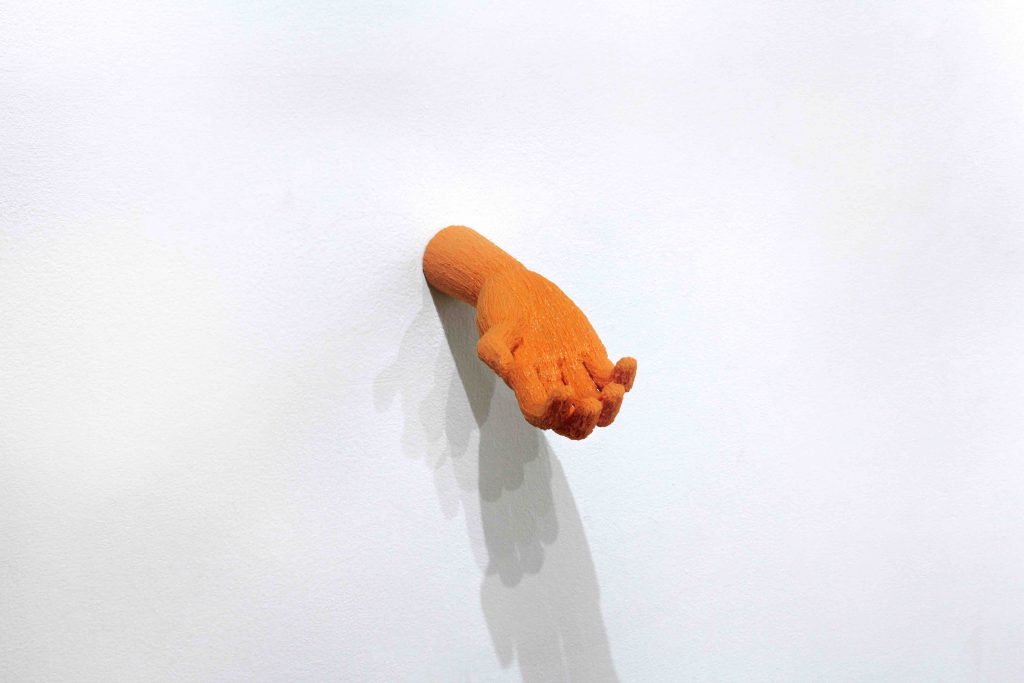 Barnhart uses a diverse set of strategies to maneuver around the same subject. The rage that Barnhart channels in these works is highly sardonic and draws comparison to the pioneering work of feminist artists and collectives of the 1970s, such as Martha Rosler or the Guerilla Girls. Though humorous in approach, these works together suggest the twisted relationship between power and sexual assault. Men can use their position of power not only to assault women in the first place but to attempt to squash the accusations after the fact. 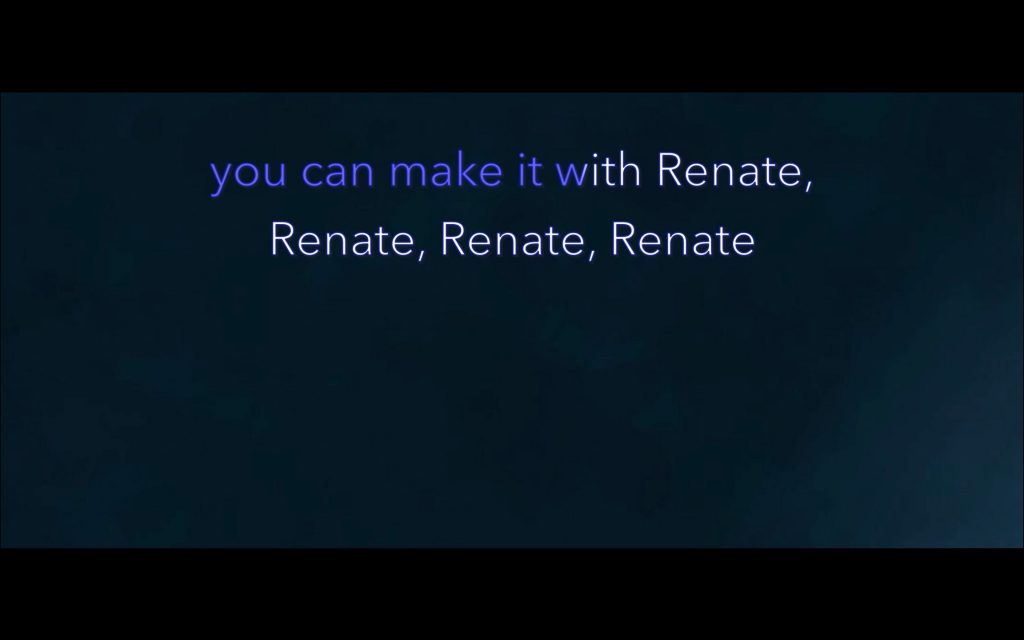 As a whole, this exhibition represents a new direction for Barnhart that embraces roughness. These works are characterized by a messy uncertainty that pervades the language of the present moment. The truth, more elusive than ever, often falls in favor of those in power. In another wall text, Barnhart directly addresses all the “Bretts” of the world: “In the end, he said, she said, always means he said. Everything will always work out for you. You will always be okay.” Frustrated and angry, Barnhart wants to keep our sense of urgency alive.