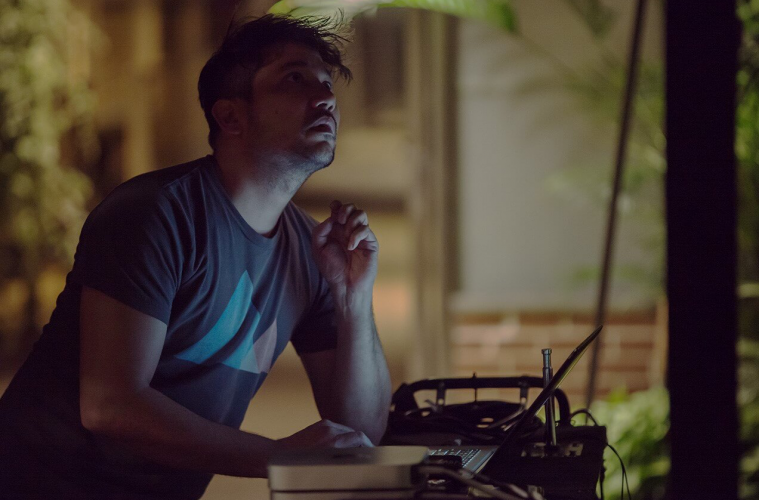 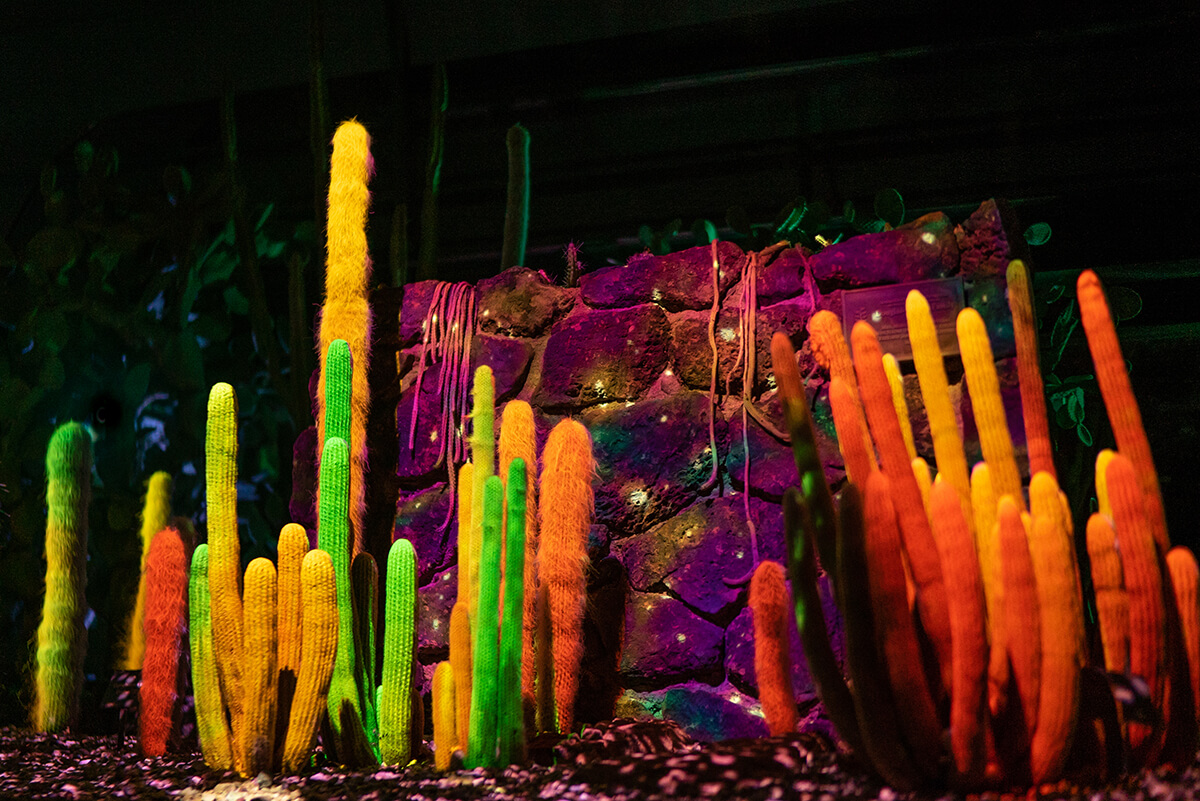 Between now and mid-May, an evening stroll through the Desert Botanical Garden (DBG) is more than just a chance to partake of the natural beauty found within its perimeter. During this time, you’ll be gliding through Electric Desert. Thanks to Philadelphia’s Ricardo Rivera and his collaborative team – together, they form the Klip Collective – with combined projection mapping, aesthetic, and technical skills, Electric Desert is an illuminated utopia where light and sound unite for multisensory stimulation.

The combination of a myriad patterns, vivid and expressive colors, and motion is thoroughly dazzling and brilliant. It’s worth multiple visits, as the initial experience immediately holds you in a wowed and breathless state as your mind races to follow its sound and motion.

Projection mapping, for those not in the know, is a video projection technology whereby video is mapped onto various surfaces, turning them into interactive displays. It’s also something Rivera is a pioneer of, with a hefty resume to prove it, along with some pending patents in this arena. 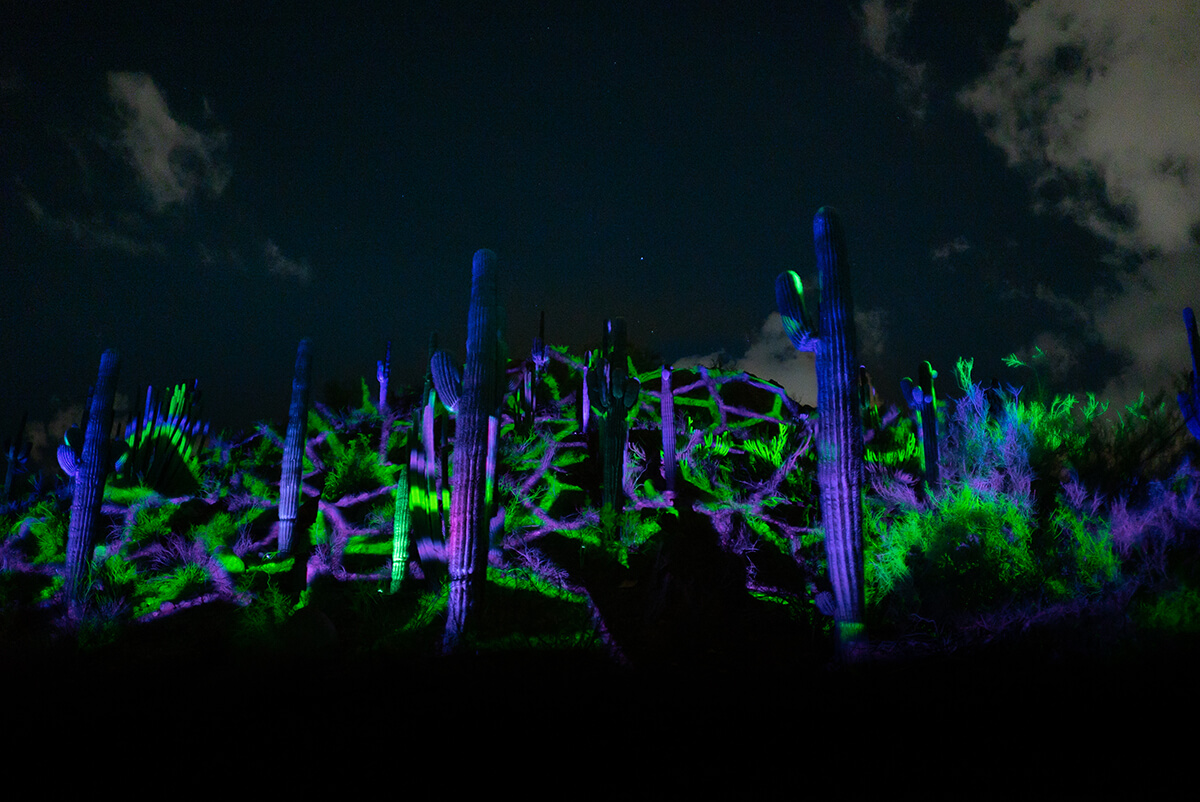 “Klip Collective started in 2003,” Rivera says, “but I was a video artist and filmmaker prior to that. I developed this approach to bringing spaces to life via video projection and projection mapping, which wasn’t really even a thing back then. We wanted to do it more commercially, so we started with some clients like the W Hotel.”

A list of big clients followed, including Nike and Target, and landing spots for these creative projections were as interesting as the Hudson River in New York City. Currently, Rivera says, the group is focused on large-scale installations, like Electric Desert.

Phoenix’s Desert Botanical Garden isn’t the first garden setting they’ve electrified; in fact, it was their first installation in a similar environment that led them to the desert. Nightscape: A Light and Sound Experience by Klip Collective opened in the summer of 2015 at Philadelphia’s massive Longwood Gardens.

“Ken Schutz, the executive director of the DBG, saw the Longwood installation and got my information from their team and invited me out to discuss doing something similar here. I put together a proposal and we went from there.” 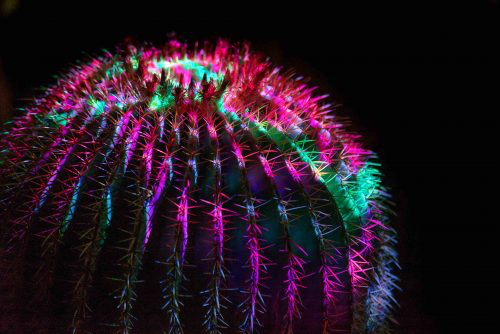 It wasn’t Klip’s first time working with plant life, but the scale was much larger at both the Pennsylvania and Arizona gardens. It was a different landscape to maneuver in, though, compared to many of the buildings and city surfaces they’d worked with previously.

Rivera says he had an opportunity to “map trees and use plants as my inspiration,” on a smaller scale. And though the spaces and surfaces they map are often very different, Klip’s crew doesn’t find that daunting. “Each project is site specific. People often ask me about my inspiration with the Electric Desert and the Longwood project, and the inspiration comes from the sites themselves. I go to each space and really soak it in, and then I develop the content and installations based on the space itself.”

Rivera still loves working with non-organic surfaces and man-made buildings, but right now he is loving what he can do with nature. “I’ve been doing buildings for so long,” he says, “so this gives me a chance to take such a different approach. The natural landscape is so inspiring. With these shapes and forms, we’ve developed a lot of cool techniques, and they’re awesome. It’s all different, but it’s really cool.” 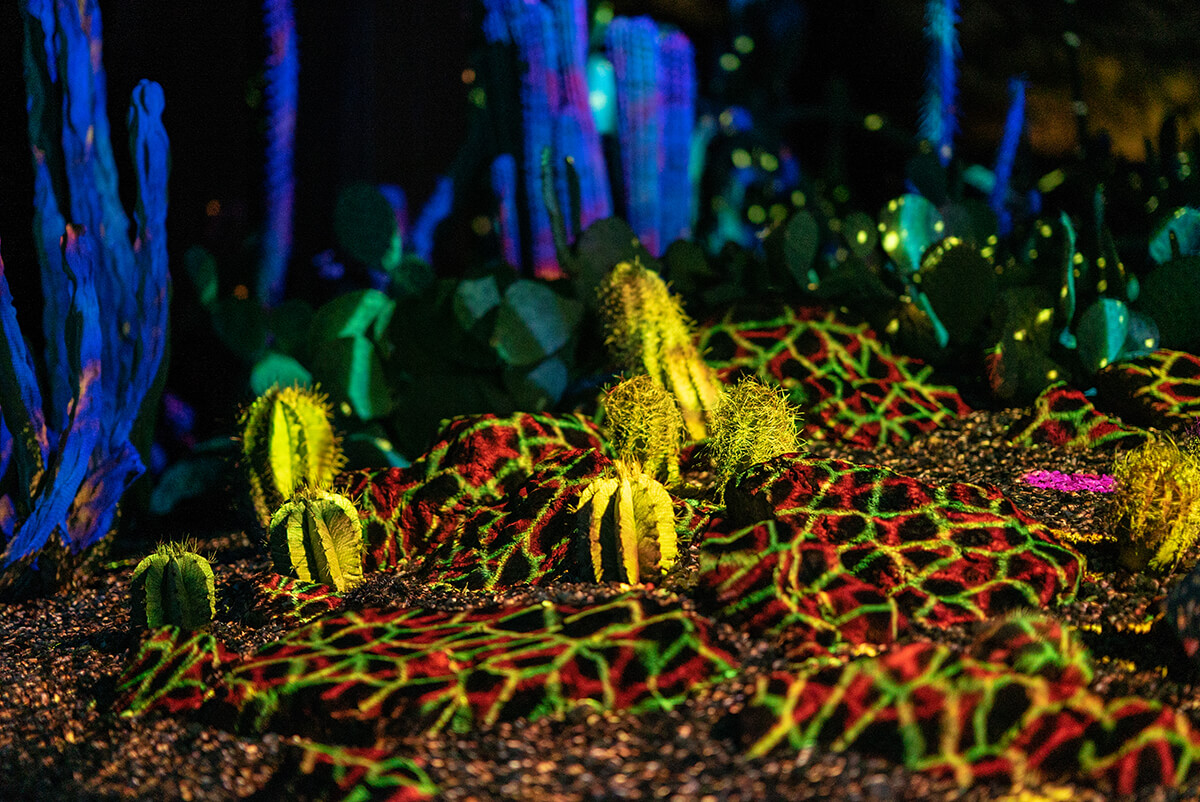 Does he have a projection mapping bucket list? Indeed. One of them could even find him in Arizona again. “I love Arcosanti,” he tells us. “I’d love to do something there. When I go somewhere, this is something I think about, or when I read about interesting places, it’s the same thing. From places like Arcosanti to abandoned monolithic buildings in Russia – there are so many amazing places, and it’s impossible to not think about new ways to bring them to life.”

Sometimes, part of bringing spaces to life is highlighting their history. Klip’s Vacant America project exemplifies that goal. In one Vacant America installation, they use installation art and virtual reality, along with left-behind items in an abandoned school, to tell its tale through these found objects. “We had yearbooks to show faces, names, and images,” Rivera says, “and incorporated things like that with sounds that included an interview with a teacher who taught there in the 1960s. It was really something. I love showing the history you can just feel when you walk into so many abandoned spaces.” 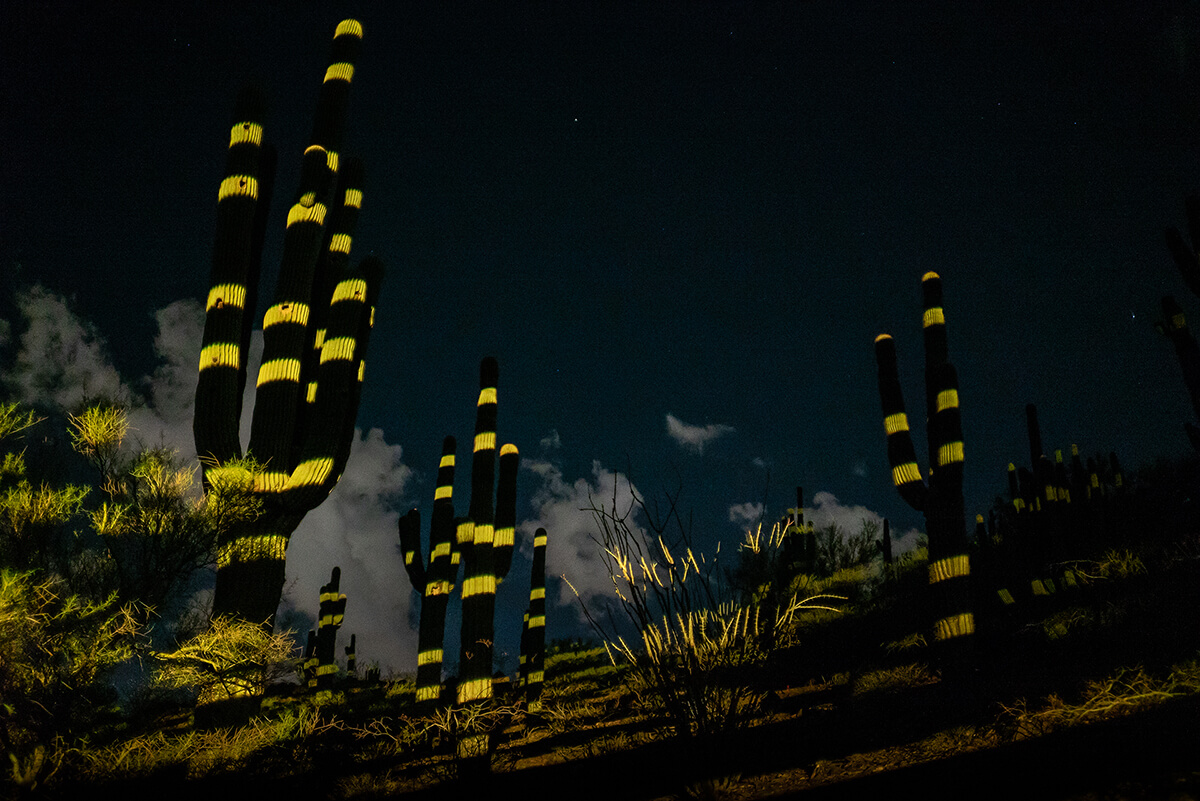 A mobile projection unit is another passion project on Rivera’s list, as well as a Lovecraft-inspired traveling carnival. For now, you can see the mastery of these innovative techniques at Electric Desert as they merge with creativity and skillful resolve to bring a new vibrancy to our intriguing surroundings. 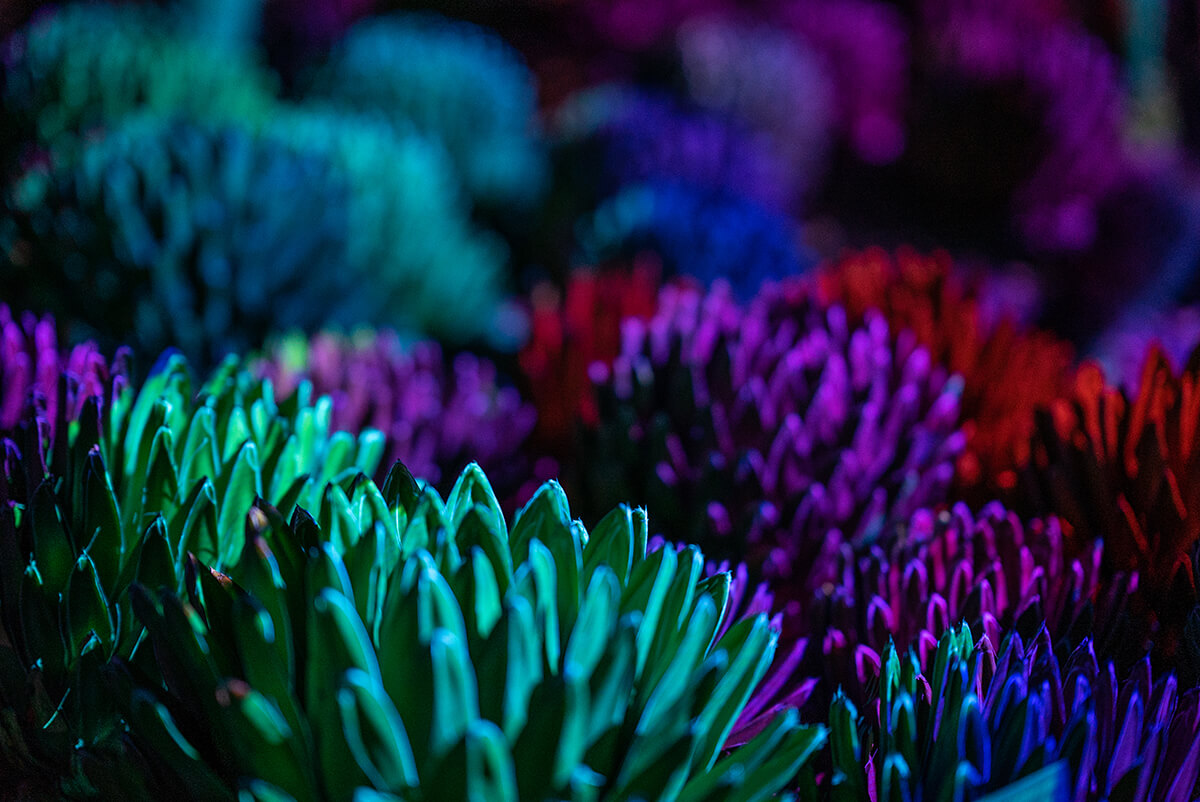