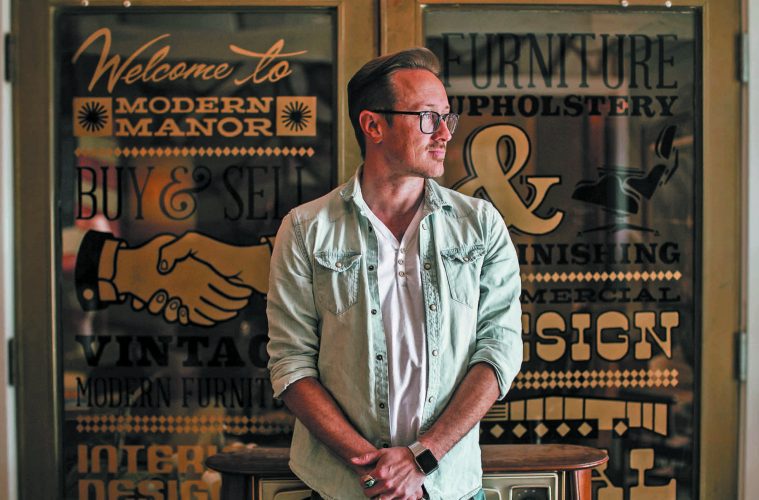 “If you live in Phoenix and you don’t have any friends in real estate, then you don’t have any friends.” Ryan Durkin, co-owner of Modern Manor (MM), a vintage furniture showroom located in Phoenix’s Melrose District, was walking me through his master plan vis-à-vis the Paris Laundry and Dry Cleaning building, which he recently acquired and is currently in the process of transforming into the new home of an expanded and reimagined MM.

Located just north of Indian School on 7th Avenue, a stone’s throw from the Melrose Arch and only a few blocks from MM’s current home, the building was constructed in 1957. “It’s an iconic mid-century modern building in Phoenix, and I’ve always loved it, always thought that one day somebody was going to do something really cool with that building,” Durkin said. The sentiment ended up being the best kind of prophecy: the self-fulfilling kind.

Not only will the move expand MM’s floor space significantly, allowing for an even larger menagerie of mid-century collectables and unique art, but the building will also include a café, bar and even a speakeasy (to be housed in the former fur vault, a climate-controlled room where people once paid to store their coats). While a specific date has yet to be set, they hope to open their doors sometime this summer. 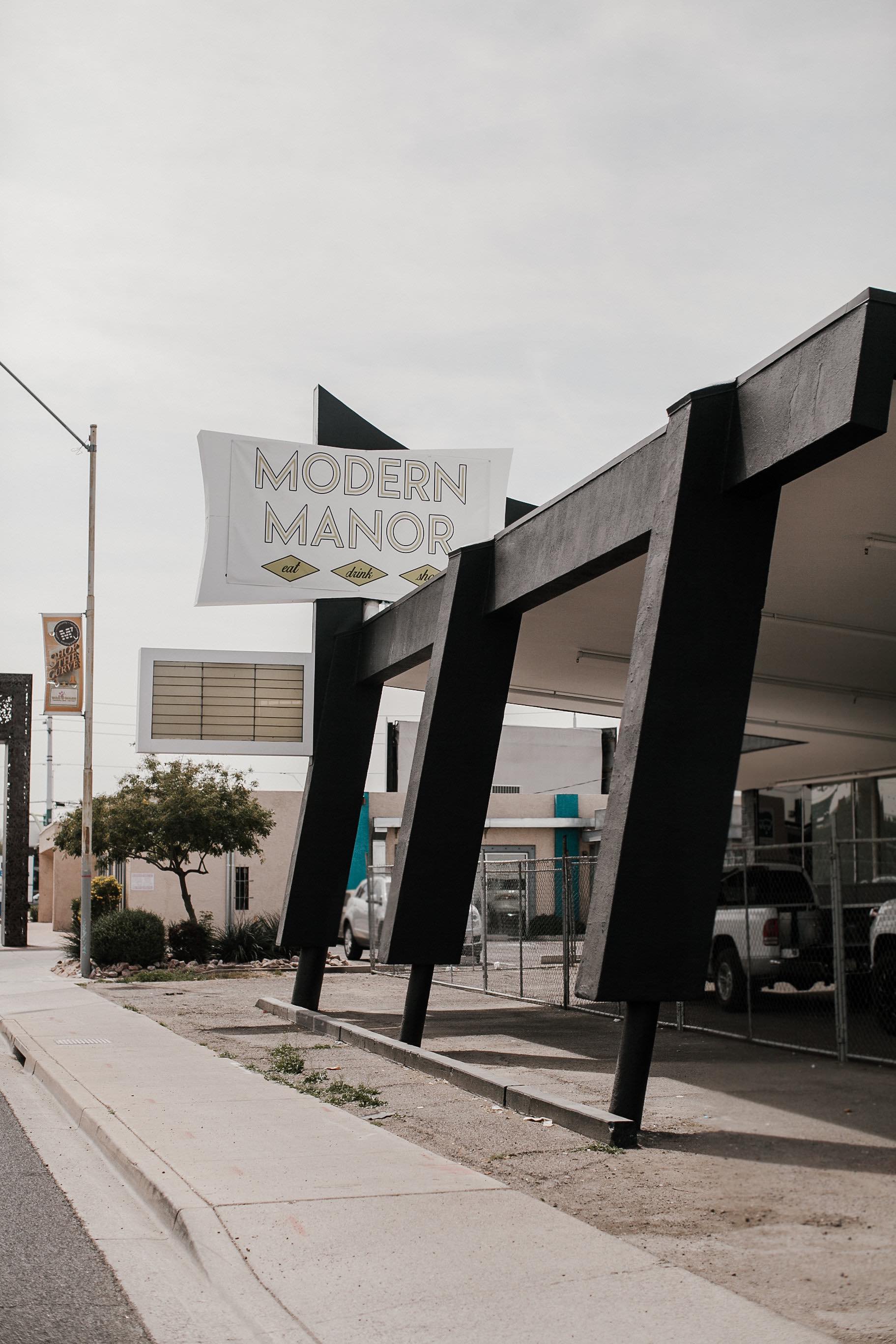 Last January, Durkin saw a short video showing a going-out-of-business sign in front of the Paris Laundry on Instagram, posted by Alison King, founder of Modern Phoenix. Durkin reached out to her and learned that not only was the business indeed closing, but that the building was also likely to be sold.

“She was like, ‘You’ve got to save that building because it’s not on the historic register and someone could buy it and just knock it down,’” Durkin said.

The building’s most prominent feature is a bold, upward-sweeping canopy, formerly painted baby blue, one example of the building’s Googie style (a sort of subgenre of Mid-century Modern, often featuring Space Age motifs, named for a now-defunct café in Hollywood).

“I love the fact that the 1957 Paris Laundry building is being repurposed and is going to continue gracing 7th Avenue with all its Googie madness,” said Marshall Shore, Phoenix’s “HIPstorian.” Shore pointed out that the attention this project is generating is helping efforts to preserve other nearby Googie style buildings, including the former Melrose Liquors, which will soon house a café/restaurant called The Googie on Melrose.

Durkin is a busy man. When his phone refused to cease buzzing during our interview, he switched it to airplane mode, only to have his iPad instantly start ringing. But this kind of intense activity wasn’t always the case for Durkin. 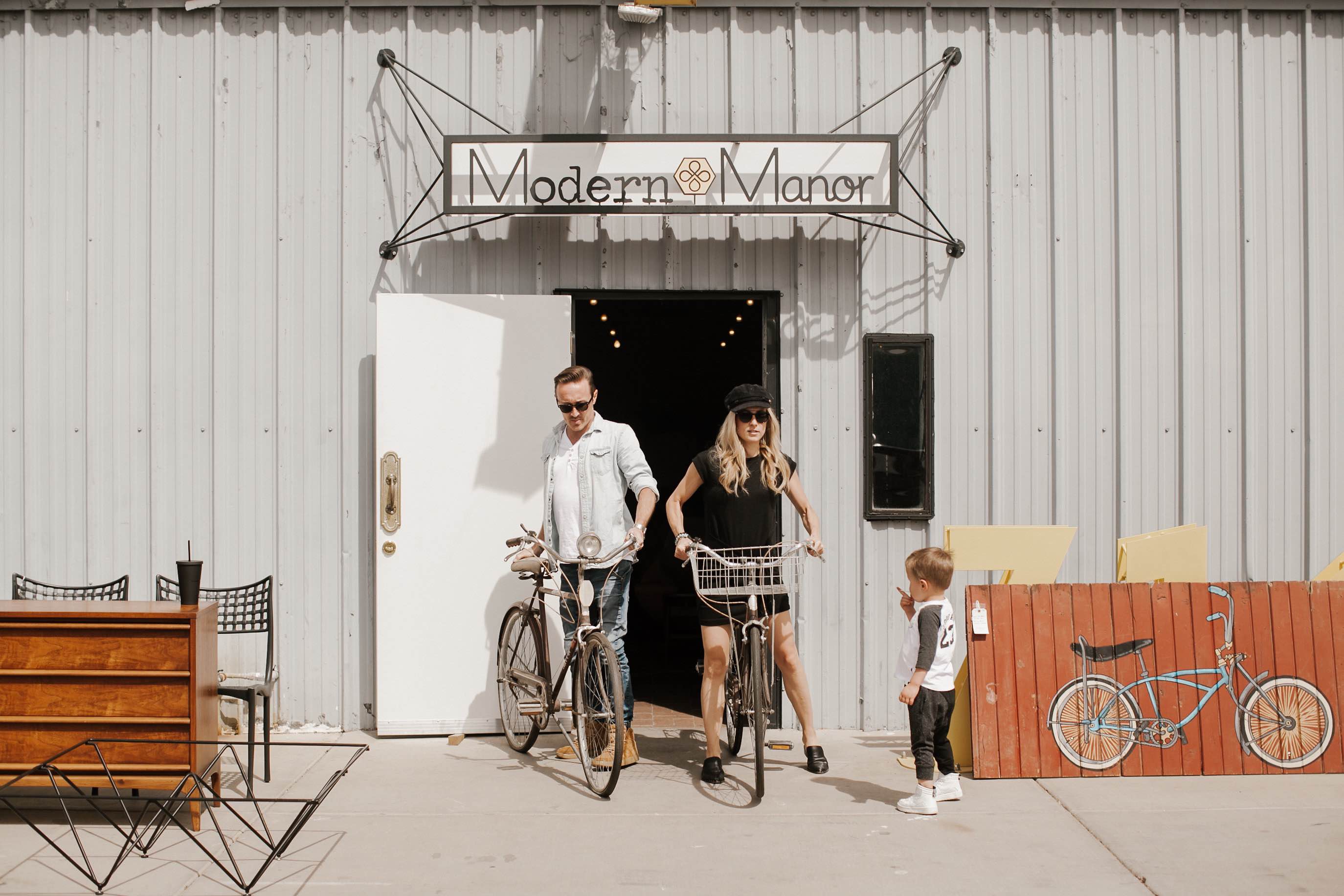 Durkin grew up in South Scottsdale and then Cave Creek. After high school, he bounced between SCC and ASU while he tried to figure out what to do. “Everybody always told me I was an entrepreneur and that I should be in business, because I’ve just always been that way,” Durkin said. “That wasn’t very helpful because then I was like, ‘Oh, I’ll be a business major.’ That sucked. Giant classes of microeconomics and macroeconomics. I hated it.”

“I wanted something more artistic. So I started a clothing brand. That didn’t work out, so I started a different clothing brand. That was better, but I was young and in college and that ended up becoming a screen-printing and embroidery business, which I still run today. It’s called Retro Fashions, because when I started, it was vintage t-shirts,” Durkin said. That was in 2000.

Durkin was still in school when he started making money and decided to drop out. His parents were less than convinced when he told them his plan. “They weren’t pumped about it. They’re thrilled now, but they weren’t then,” Durkin recalled with a laugh. “They were like, ‘No, you’ve got to finish.’ I was like, ‘And then what, I’m going to have a degree to show to myself, because that’s who I’m going to work for?’”

Durkin did odd jobs while getting his businesses off the ground, everything from delivering pizza to working at a spa, to being employed at a now-defunct, high-end fashion boutique in North Scottsdale called Electric Ladyland, “like the Jimi Hendrix album.”

Then he met and married Kylie, MM’s co-owner and lead designer. The couple will celebrate their tenth anniversary in November. After getting married, they got a condo and needed to furnish it.

“We didn’t want to go to Ikea,” Durkin said. “We wanted different stuff. I’m just a natural-born collector. I love to collect because I love the history of things. I love things that are hard to find. My wife is a natural-born designer, and she’s really good at it.”

Nearly every weekend, they would drive out to places like Sun City to “bomb around estate sales and go to auctions.” They furnished their condo but inevitably found more than they needed, and usually at a price too good to not buy.

“This was before everybody jumped on the Mid-century Modern thing – just before. Don’t get me wrong, I’m not like, ‘I’m old-school man, I’ve been doing this forever,’” Durkin said. “There are lots of people who’ve been doing it longer than me, but we did get in before it really blew up.” 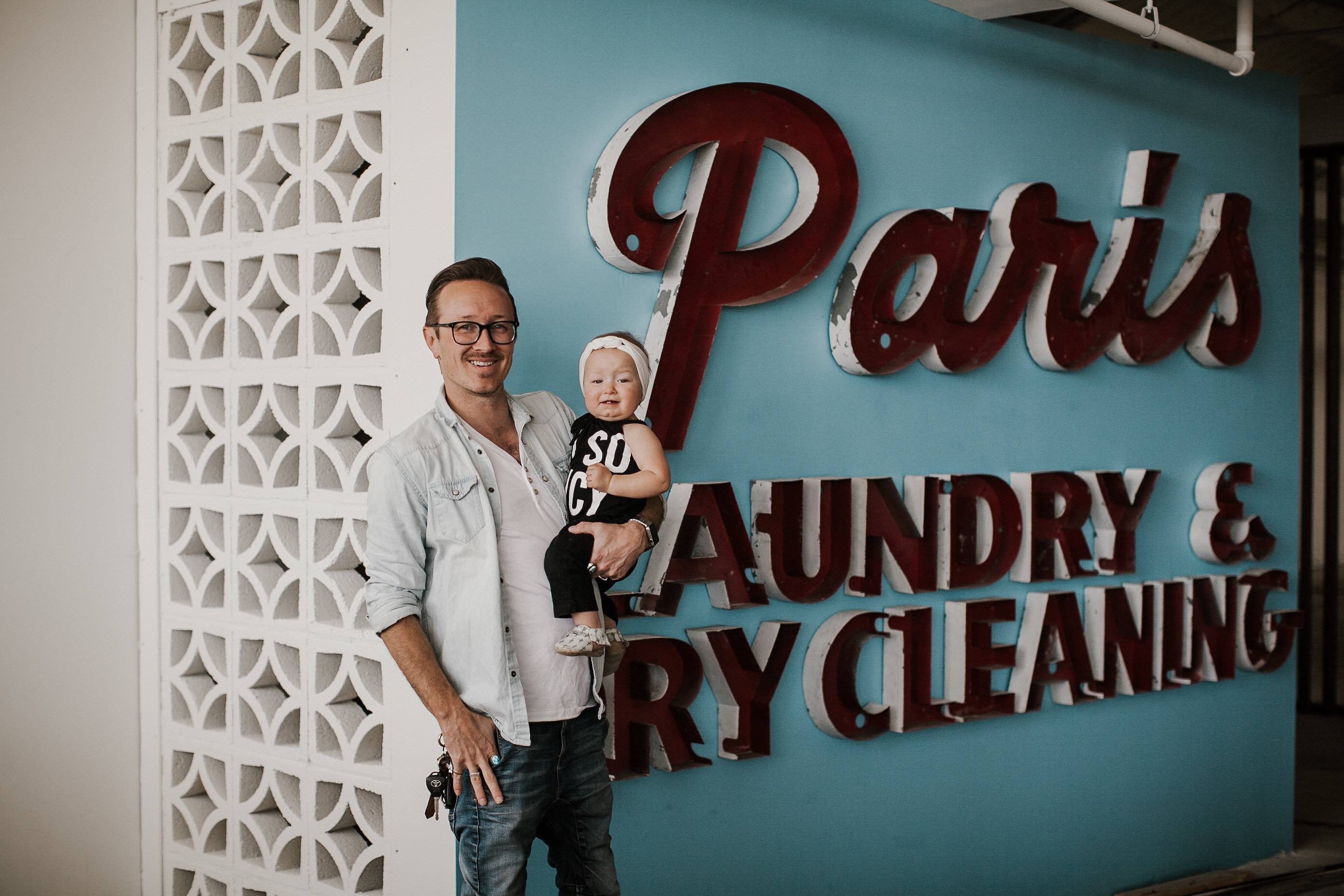 Durkin recalls deals were easy to come by then. The couple would fill their garage, sell everything on Craigslist or eBay, and then fill it again. It was a hobby that became a business. Eventually, they got a booth at an antique mall.

Success built on success, and April 1, 2010, they opened the doors of Modern Manor, roughly a block west of 7th Avenue on Hazelwood Street. Despite doing virtually no advertising, the business has thrived.

“We just opened up and started to sell stuff,” said Durkin, who seems to revel in underplaying the skill and hard work involved. “It kept going and we kept selling stuff. We learned as we went: about designers, about how to get things upholstered, and how to put all the pieces of the business together. And just kept doing it.”

Having many friends in real estate and a surplus of furniture, along with design chops, MM began staging houses. “It went from two or three a year to now we’ve got two or three a week. We’ve got 30 houses staged at any given time,” Durkin said. “We’re constantly staging, and so that’s been a really good thing for us. It’s been fun, but it’s also been a pretty lucrative way to showcase our design talent.”

Another aspect of Durkin’s passion for repurposing shows in his artwork. His choice of medium is, unsurprisingly, old toys, old tools and other cultural ephemera too numerous to list. For example, he pointed out a work that features Star Wars figurines configured into the symbol of the Galactic Empire and enclosed in a frame. Having buckets of old action figures and other toys, many of which had little or no resale value due to overproduction in the booming ’90s, Durkin couldn’t bear to throw them away and has found a way to give them a second life as art objects. 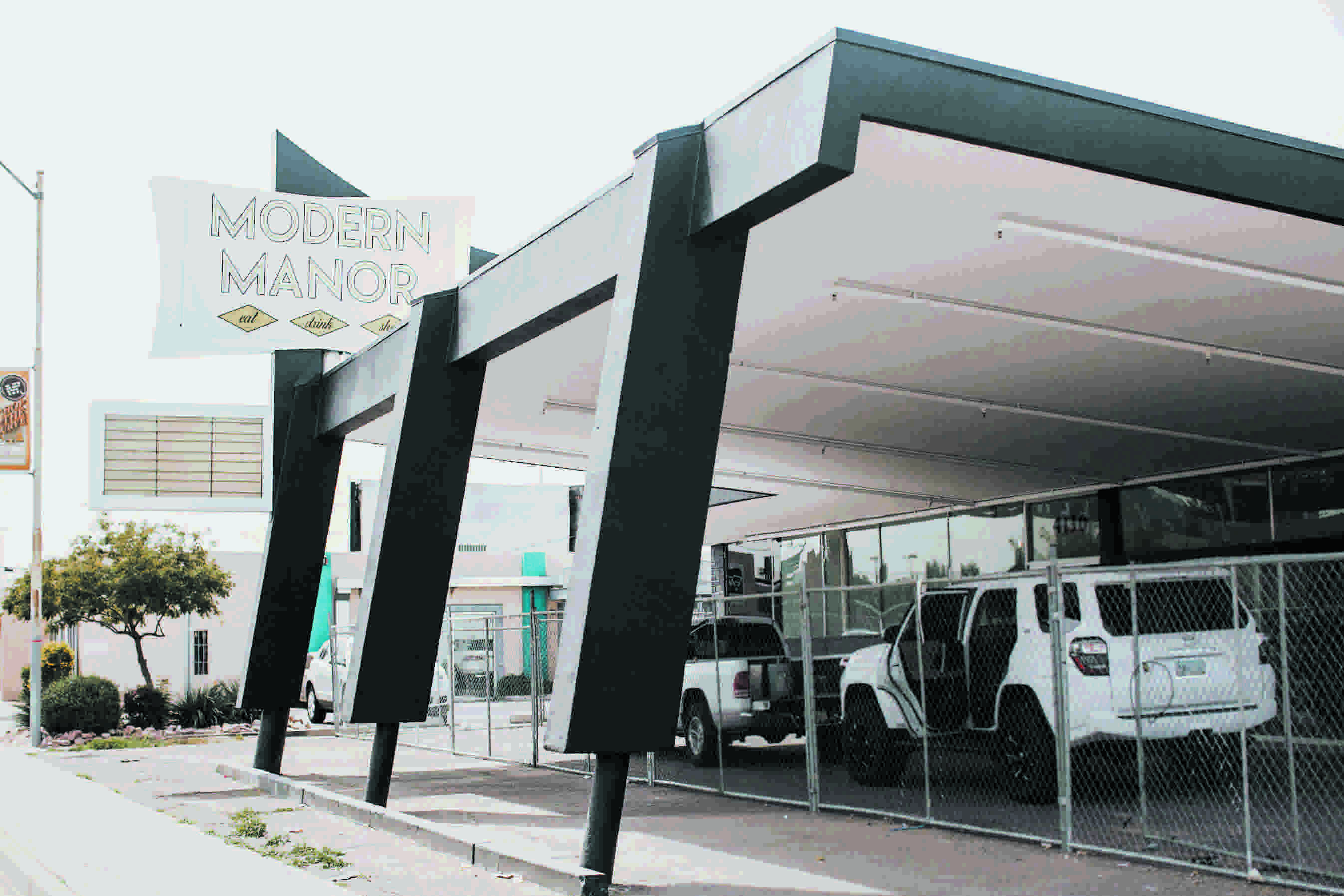 “It’s not very complicated, to be perfectly honest,” Durkin said. “Don’t get me wrong, recycling is great, but if I’m being blunt, I’m not all green. You know, ‘Save the planet.’ For me, it’s more that I just don’t like to waste stuff.”

In another vein of his work, Durkin takes old paintings – the kind of landscapes you might see on a motel wall – and then adds discordant elements drawn from pop culture or modern references superimposed on older settings. In one, an impossibly large Lego monster peers over the horizon projecting laser beams from its eyes while a lone green plastic army man almost disappears into the landscape below. In another, Durkin adds a conspicuous iPhone into the foreground of a table setting featuring a container of eggs and vat of wine.

“I mean, if it has no value, then it’s garbage. But iPhones, for instance,” said Durkin, luring me deeper into his rabbit hole. “How many people have an old iPhone that’s like five generations old just sitting in a drawer? What are they going to do with it? Nothing.”

“If you think about it, it’s an incredible piece of technology, and it still has value, but it doesn’t serve a purpose in this ever-changing world of ‘We got something newer.’ It kills me to just throw it in the garbage. I would rather figure out a way to still enjoy it.”

Whether it’s repurposing action figures, phones or entire buildings, Durkin is helping to preserve history with his own unique flair, proving again that one person’s trash is another’s treasure – and that there is value in not only preserving old things, but reimagining them as well.