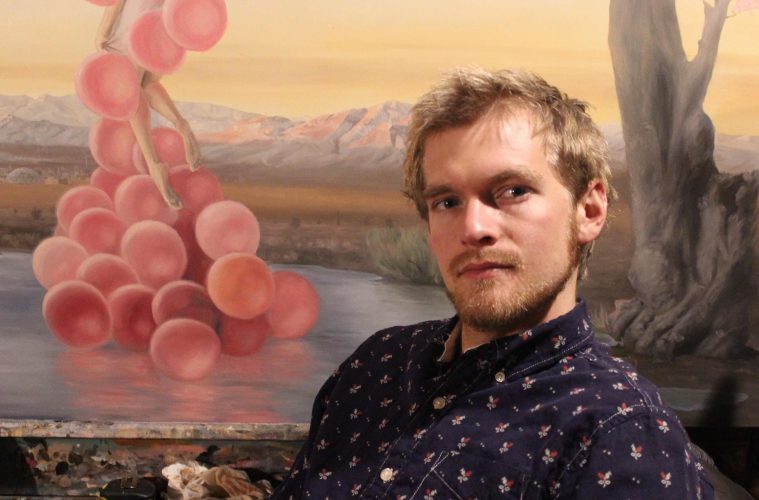 The Surreal Eye of Sky Black 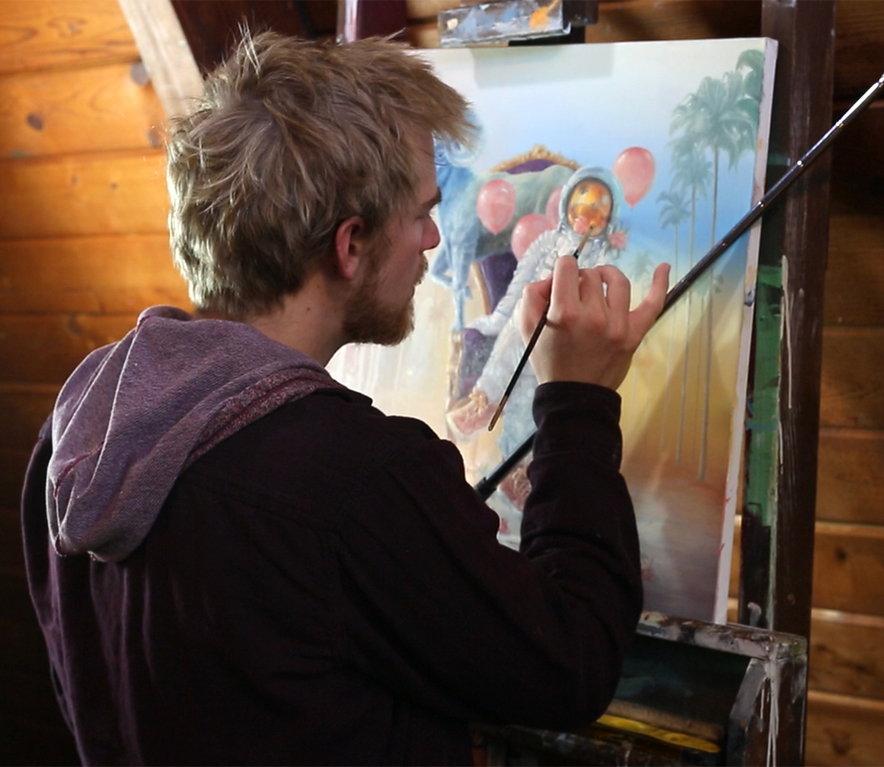 Flagstaff-based artist Sky Black currently has a couple of ways to see his work in Phoenix. There is the epic solo exhibition Before We Forget Ourselves at downtown’s monOrchid Gallery. Travelers or anyone who just wants to pop by the airport to visit the Sky Harbor Museum can also see Black’s art in Terminal 3, where three paintings are on display through August 26.

Black is a native of Arizona, born in Flagstaff, who traveled around as a youth with his mother and brother, living in a few places – including the Hopi reservation – before they settled down in Michigan. Black’s affinity for Flagstaff was satisfied by regular visits to see his father and other family members, soaking up as much nature as possible on river rafting and camping trips. Back home in Michigan, especially in his early high school years, Black was an avid baseball and basketball player, considering a career in professional sports. Things took a turn, though, when he suffered an injury his sophomore year.

“I decided to come out to Flagstaff for a semester,” he says, “and that’s when I really started thinking about art and focusing on that. My grandma was a professional painter, and we inherited her supplies and oil paints. I was always attracted to them. They had this mystical quality for me. Prior to that, I’d always associated them with art you would see in museums or in cathedrals. I was so attracted to the colors.”

Before he got involved with the oil paints, Black says he had been drawing most of his life. “I was always sketching. Even back in first grade I remember being really good at perspective.” He cites his mother as an important part of his artistic development. “She’s an early childhood educator and would always try to bring out our best talents. I grew up with seven brothers and sisters, and we’ve all gone in different directions. One is a farmer, one a microbiologist, another is a teacher. My mom now owns and runs her own school, and I think we were her prototypes. She has a freedom-of-choice attitude and let us evolve on our own.”

Around that fateful sophomore year is when Black really cranked up the sketching. “I’d spent time back and forth between Michigan and Arizona, so I became ineligible [for sports],” he says. “I also went through my first heartbreak that year and couldn’t stop sketching.” He ended up back in Flagstaff for his senior year and feels lucky to have gotten an art teacher who also gave him freedom.

“The art room at school was under construction, and things were chaotic. I showed the teacher my portfolio and sketchbook, and she let me work on my own, like it was an independent study,” he recalls. “My art teachers in Michigan were more controlling, and that didn’t help foster the creative process.” During this time, Black made the first oil painting that was very significant to him, called “Radiohead,” in reference to the band that he says has been a huge influence. 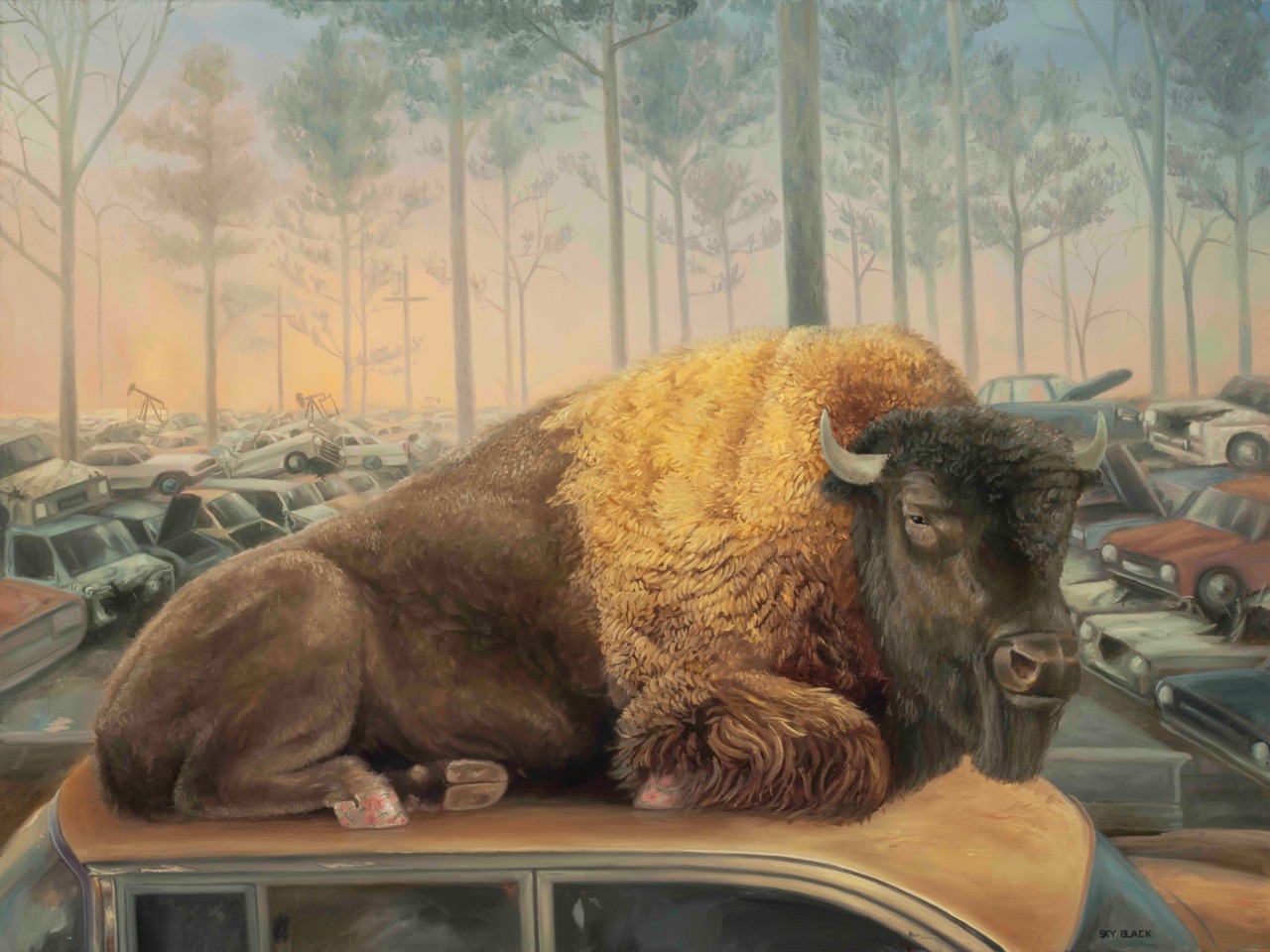 He went back to Michigan after graduation and worked on a large-scale project with another artist for entry in the annual ArtPrize competition. It made him need to decide between staying there to do that or taking advantage of a scholarship to NAU. Figuring that “school will always be there if I want to go,” he stayed. The pair didn’t win, but they placed in the top 75 of 2,000 entries. Black says that the other artist helped him hone his oil painting techniques, so it was a beneficial choice all around.

That achievement under his belt, Black once again headed to Flagstaff. He was 19 at the time, and that’s when he really started selling his original paintings. He was doing the Flagstaff First Friday art walk and took the promotion very seriously. He also found another mentor in acclaimed artist Joe Sorren, who spent many years in Northern Arizona. Sorren’s dreamy and surreal paintings have received much international recognition. “My mom has known Joe for many years,” he says. “He really gave me a lot of great advice on the narrative and storytelling aspects of my work, as well as how to handle the business side, like pricing and dealing with galleries.” 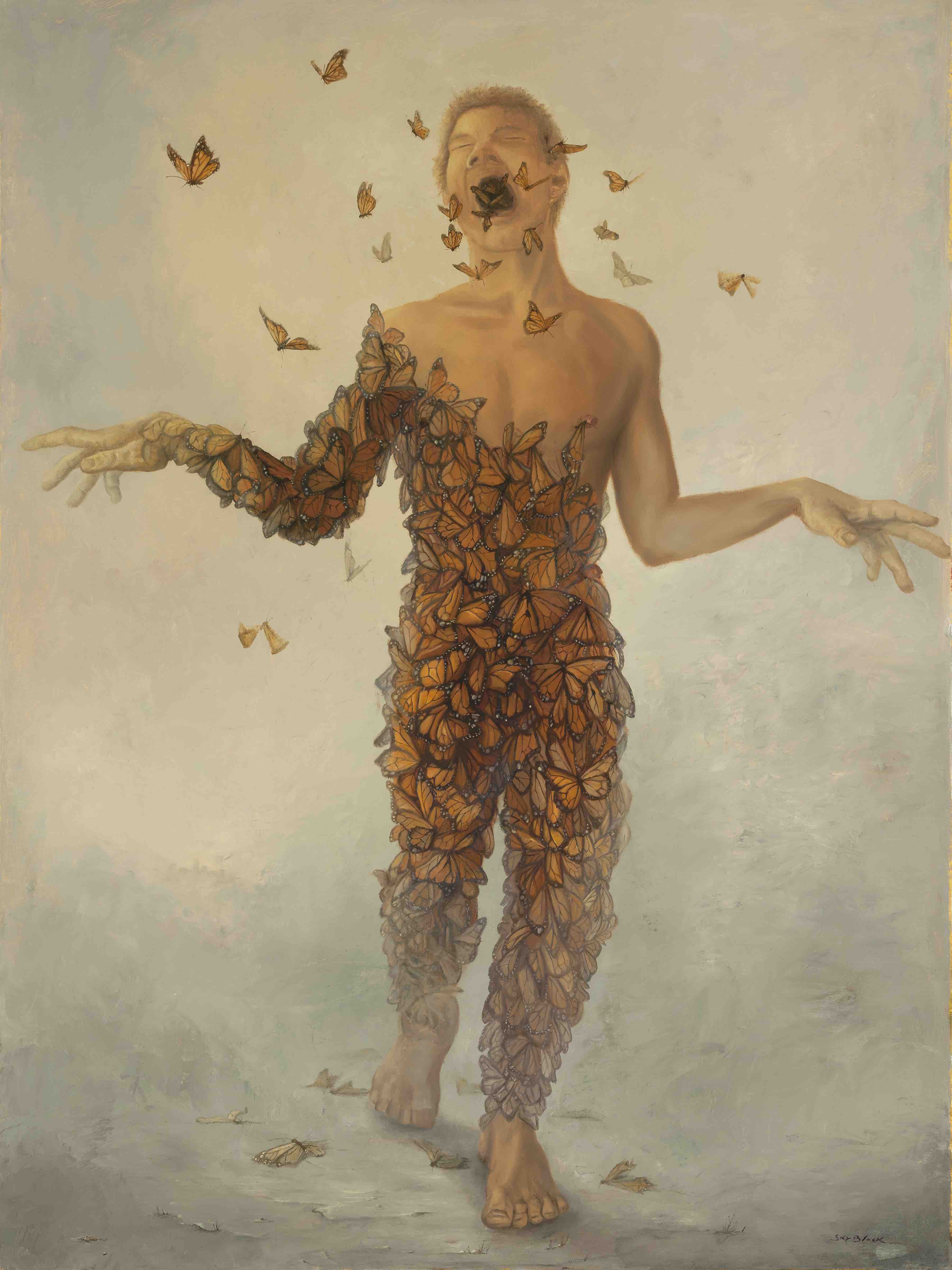 “I’ve always been concerned with a narrative type of surrealism and combining things that haven’t been combined,” says Black, “and Joe always reminded me that no two artists will ever tell a story the same way.”

Color choices are an early point of notice in Black’s work. He definitely shares with Sorren a tendency to present them gently. They’re soft and subtle, generally. When he does use deeper or bolder colors, they don’t come at you like a punch in the face, but they make you take notice.

Sometimes when Black lets you rest easy as you soak up those pillowy colors, his subject matter gives you the gut hit. “Candy Cane Cart of Consumption” is one piece that exemplifies this. From a distance you’re drawn to the overloaded confectionary cart, soaking up the prettiness of its pastel presence. A closer look finds you in the midst of a deeper message about the evils of consumerism. 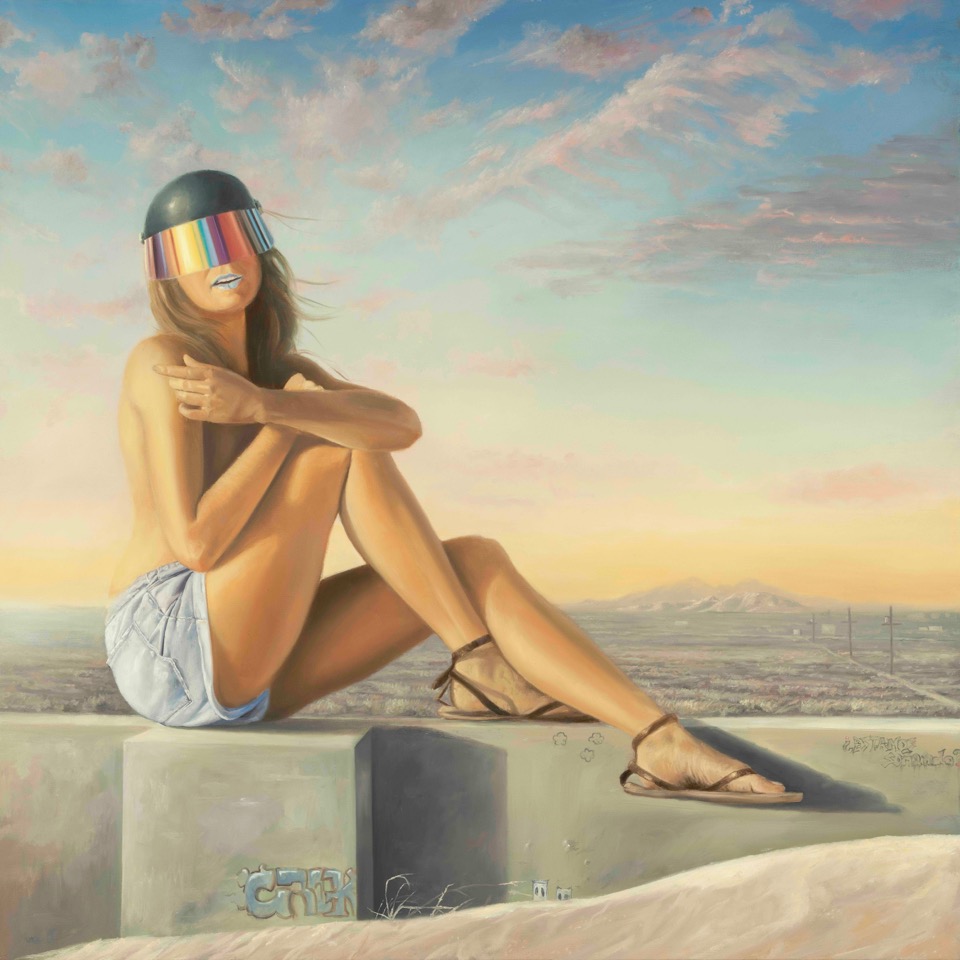 Many of the works in Before We Forget Ourselves are timely statements on human behavior. Black says his style has evolved quite a bit. “I really got into nautical themes for a while,” he tells us. “In 2012, I was into pinks and magentas and desert landscape scenes. I explored metaphysical themes, too. In 2014 and 2015, I started getting more figurative, working with people as the subject, and then I started mixing them with animals. That led to my first show with Laura Dragon at {9} The Gallery, called Our Other Selves.”

He says that show was about our other personalities that we see within animals. “I wanted to show that we’re not as separate from animals as some people think, especially some religions. The way we treat animals is often ethically wrong and horrible. We are all part of this animal kingdom and we need to realize that – that was the underlying background of those paintings.”

You’ll see that in the show in pieces like “Just Trying to Live Here, Too,” which features a displaced buffalo lying atop a car amid a sea of other run-down vehicles.

It’s not just the engaging colors and the important social messages in the work that make Black’s pieces complete, it’s the skill. Though they’re a bit older, the nautical pieces from earlier in Black’s work, especially of ships in motion, are spot-on, providing evocative looks at the power of the sea and its sometimes-turbulent scape. 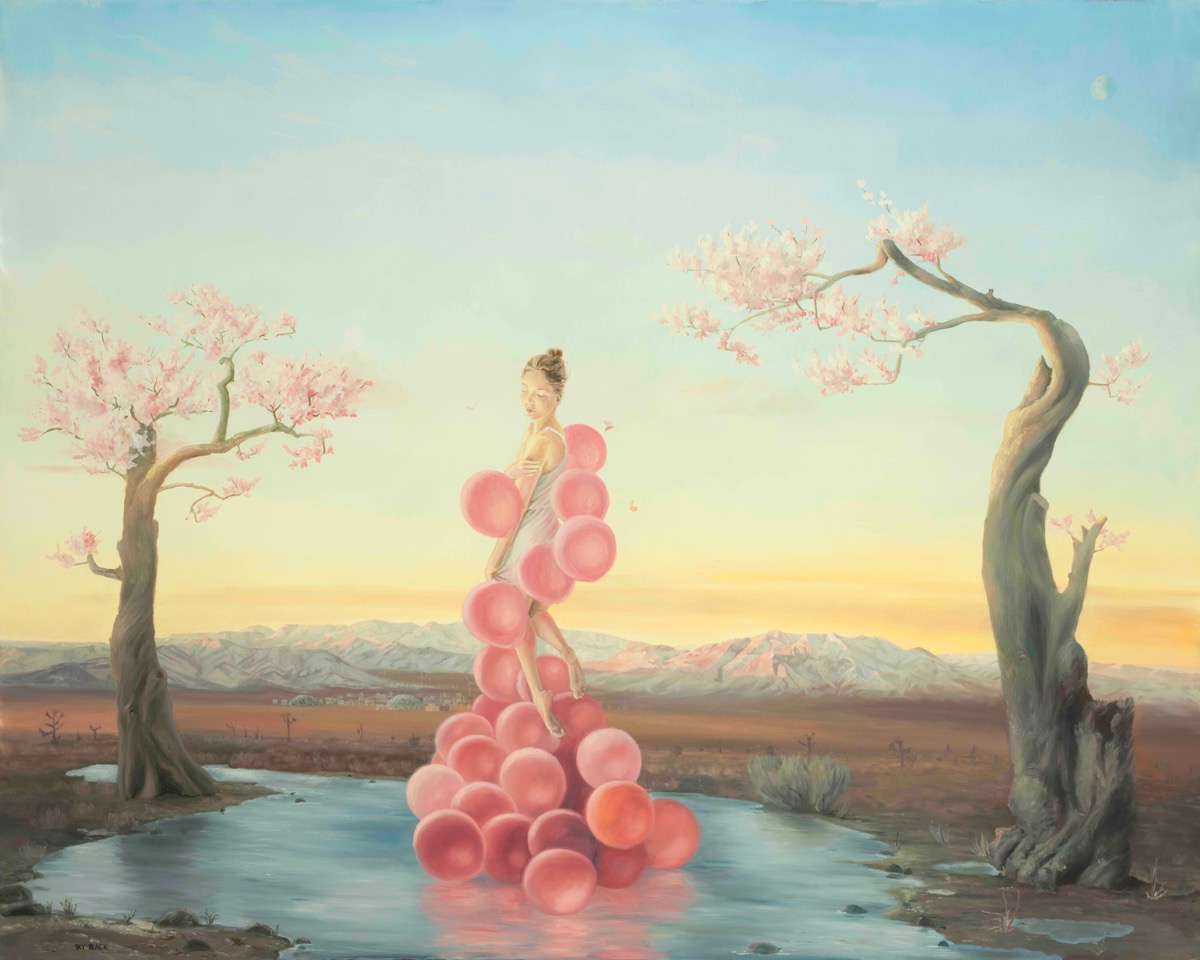 “In Bloom,” a piece in the monOrchid show, is a gorgeous work. It’s refreshing that Black takes advantage of the textural abilities of oil paint. Here, a human figure is covered in flowers. With their hands over their face, the fingers are spread just enough for the viewer to see the eyes looking back at you. Thick, well-directed oil goops give it a content depth that is enveloping. The sweet floral blend, set against a darker background that looks like billowy clouds, is the kind of work that asks you to just breathe for a minute.

Black also paints murals – one is the “Sound of Flight” mural on the Orpheum Theater in Flagstaff. “I worked on it for two years with two other artists (R.E. Wall and Margaret Dewar),” he says. “At just under 5,000 square feet, it’s the largest mural in Arizona. It was great to be able to do that for the community.” It took two full summers to finish. He also did a mural in Berlin a couple of years ago, and they’ve invited him back to do another. Black hopes that will happen before the year is up.

Meeting Wayne Rainey, monOrchid’s director, last fall led to Black’s solo exhibition. “He heard about me through a mutual friend and liked my work. We met up and I showed him my murals in Flagstaff and things went from there.” In two weeks, Black is also going to start on a mural project at monOrchid. The gallery will continue to represent Black’s work in Phoenix, and the current plan is for him to have a new show there every 18 months.

Before We Forget Ourselves runs through June 1. “It’s an eclectic mix of things that I gain inspiration from and things I have concerns about. Overall, I think it’s fun, interesting and thought-provoking,” he says. “I want people to look at it with an open mind and make their own interpretations.”