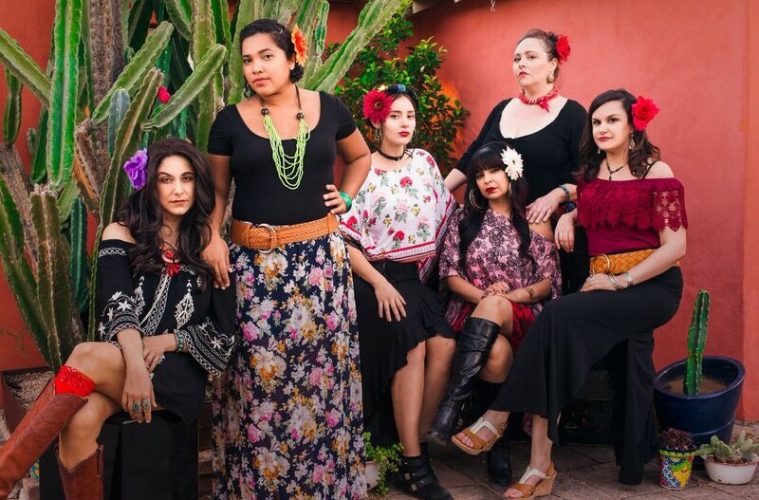 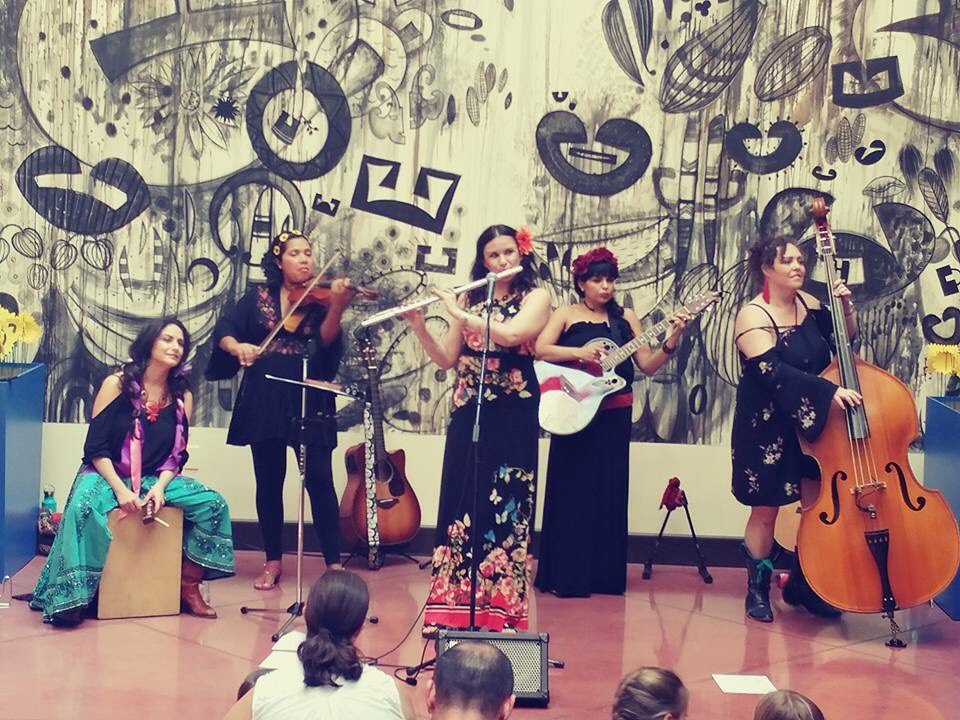 The six talented individuals who make up Las Chollas Peligrosas (which Google Translate says means “The Dangerous Chollas”) are all female and all committed to the cause of creating beautiful music while getting involved in making the world a more positive place.

Andria Bunnell, who is also a member of the wildly popular Phoenix Afrobeat Orchestra (PAO), adds vocals and percussion to the mix. She wants one thing to be perfectly clear: “Some people are supposed to be on the frontlines (of change) and some people are not, but we can utilize our fanbase to benefit the community. We want to partner up with the community to address issues through our music and want to have a wide variety of people involved. For us this isn’t just about a band. It is about a movement.”

Las Chollas Peligrosas is about creating a vehicle where fans and the community can get involved in making their world a better place. There is also the benefit of hearing some truly great music, and that is never a bad thing. Bunnell is joined by Scottsdale’s Anameike Quinn on upright bass and guitar, Tempe’s Tatiana Crespo on accordion, Phoenix’s Melissa Medina on guitar and flute, Mesa’s Rachel Villa on guitar, and another Phoenician, Marian Heinekken, on violin and percussion. Each of the women in Las Chollas Peligrosas also sings lead on at least two songs per set as they play more and more packed shows around town. 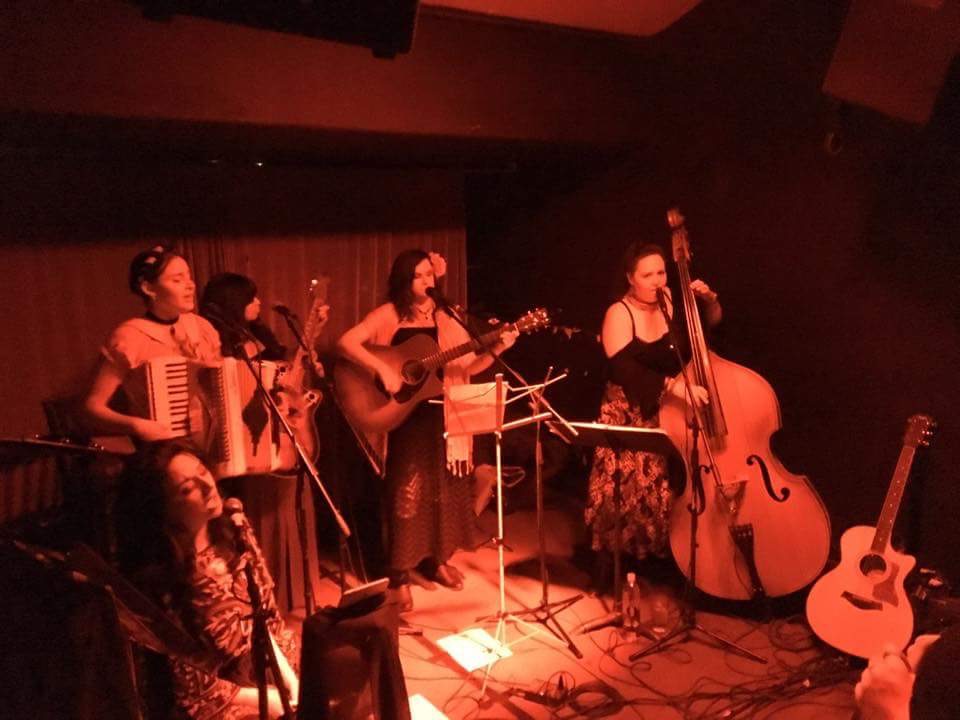 The six women who make up the band are all avid supporters of local music, citing bands like Bunnell’s PAO, Snake!Snake!Snakes!, Jerusafunk, Playboy Manbaby and many others as influences. They enjoy playing places like the Crescent Ballroom (Phoenix), Shady Park (Tempe) and anywhere, really, where people want to sing along, dance and have a good time.

We caught up with the band via email and phone as they prepared for a tribute to the late great Sharon Jones of the Dap Kings in August at Crescent Ballroom, and here is what they had to say:

How did Las Chollas Peligrosas come about?

Andria: I was talking to my friend Mike Logan, who helps to put on the Coronado Porch Concert Series in the Coronado neighborhood. I had mentioned that I missed singing in Spanish so I was putting a duo together with Melissa Medina, playing traditional Mexican songs. He was telling me that the next porch concert series was going to feature all women, so it seemed like our new thing could be a good fit.

But as I thought about it, it just seemed like it would be so much cooler to add some additional instrumentation. There were several other ladies around town that I’d really wanted to work with, so I hit them all up. Everyone was totally into it from the jump. The thought was that we were only getting together for that one gig, but when we got into a room together and started playing, we were like, “Um, I think we just started a band.” It was magic. That just doesn’t happen very often. 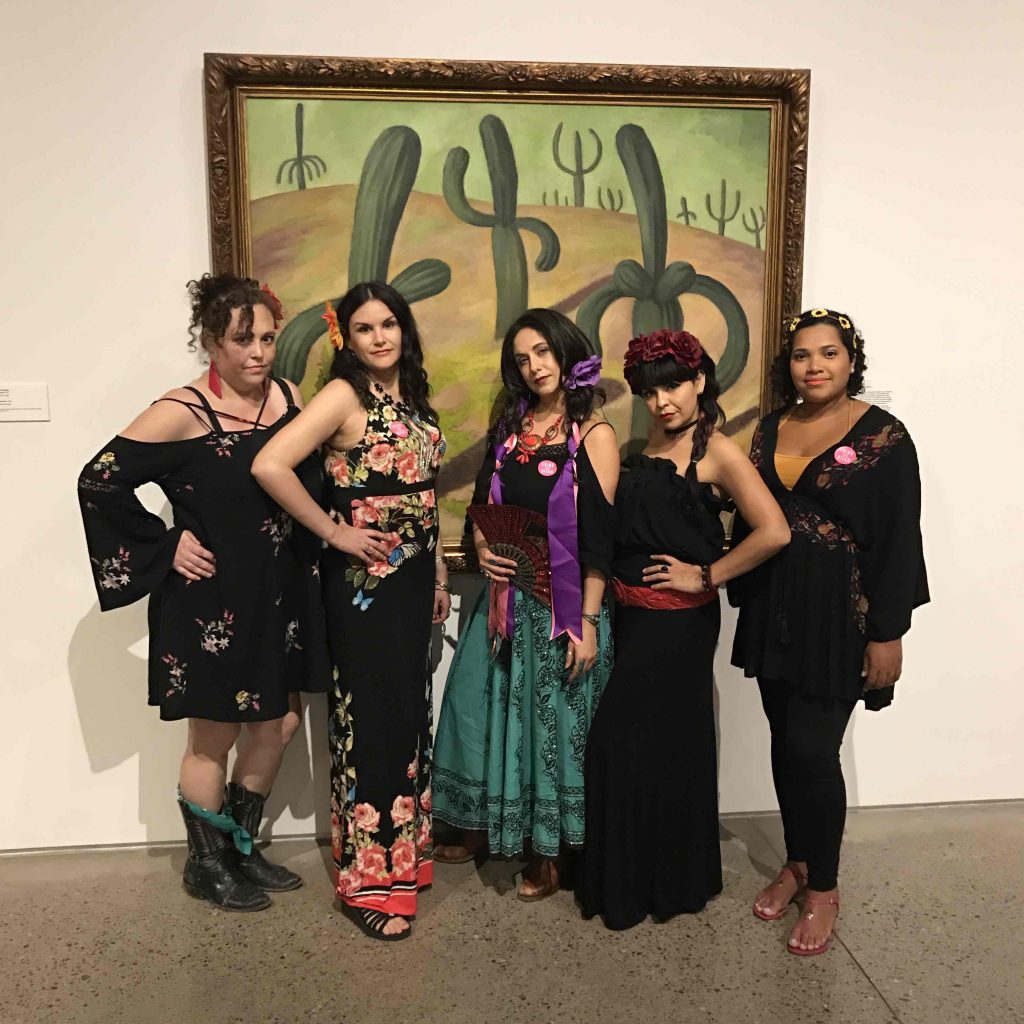 At first, we were just going to play some traditional Mexican music, but we realized that everyone in the band was a songwriter with incredible originals. So we thought, why not play a couple of each person’s originals and throw in a few covers? Amazingly, although our styles are all different, everyone’s songs just seem to flow and complement everyone else’s.

Where was your first show and when was it?

Andria: Our very first show was at The Lost Leaf. We had decided that it might be a good idea to do a show to get the bugs out before the main event—the porch concert series. At this point, we had no idea what the response was going to be, so we figured it would be an off-night show that would be super chill. Then we put up a Facebook page and got 500 likes in two days, and we were floored.

We realized then that this thing might start taking off faster than we anticipated. That night at The Lost Leaf ended up being packed, and we were overwhelmed by the response. Because of that night we were asked to play our second show at Viva Phoenix two nights later—all of this before the show that we were originally getting together for.

Then, of course, the Coronado Porch Concert Series was just incredible. That day was really special. The whole neighborhood welcomed us with open arms, and we really felt appreciated by our community.

What do you think about the current state of the Phoenix/AZ music scene?

Andria: We are blowing up! People have been sleeping on Arizona for a while, but that’s about to change. Honestly, there is just WAY too much talent for it not to happen. I feel like we are on the verge of something big happening. Not even kidding, like a Seattle in the ’90s situation. 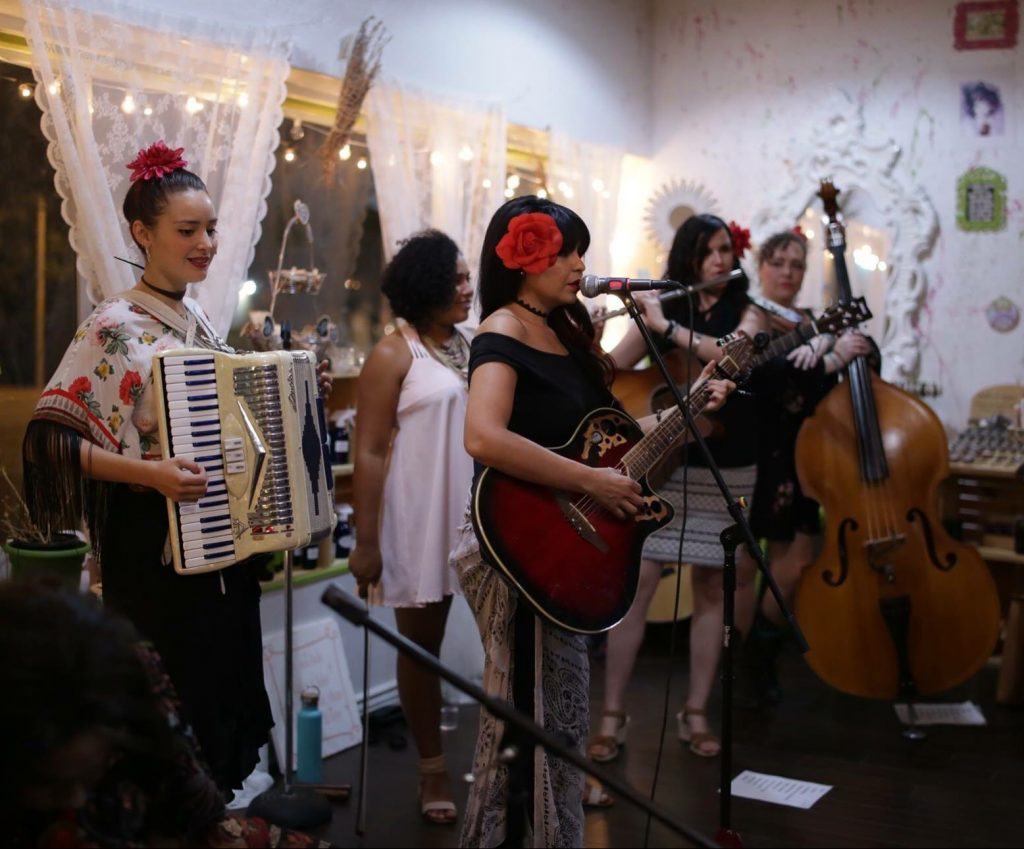 Except I don’t think it’s going to be about one genre. We have so many talented bands here that are from different genres but they are all KILLIN’ IT, that I think some real national and international recognition is on the horizon. You can quote me on that (laughs).

Tatiana: I think that the music scene here in Phoenix is highly underrated. We have so many wonderful musicians that play all over the Valley. From jazz, to punk, to Latin music, Phoenix offers a great variety of acts every night of the week. I love being a part of the music scene here.

How does Phoenix and/or Arizona influence your sound?

Andria: It’s been quite a shift in perspective for me since the early days of when I first moved here. I talked a lot of crap about how little of a scene there was, and after a couple of years, I decided to move back to L.A. Funny thing was, it only took a couple of months back in L.A. for me to realize that I was wrong about Phoenix and that there was a cohesiveness that I had just not found anywhere else. Long story short, it took a couple of years for me to get back, but as soon as I did, everything started popping off for me. It hadn’t changed that much, but my perspective had changed.

We have an incredible amount of talent in this valley and a thriving cultural scene that has been growing exponentially. This band is a collective of women who have been playing in different bands around the Valley for years. Our city has nurtured our growth and has allowed us to cross paths and converge when it was the right time to happen. Arizona is in all of our hearts. It is a magical place where we were meant to unite for our purpose. 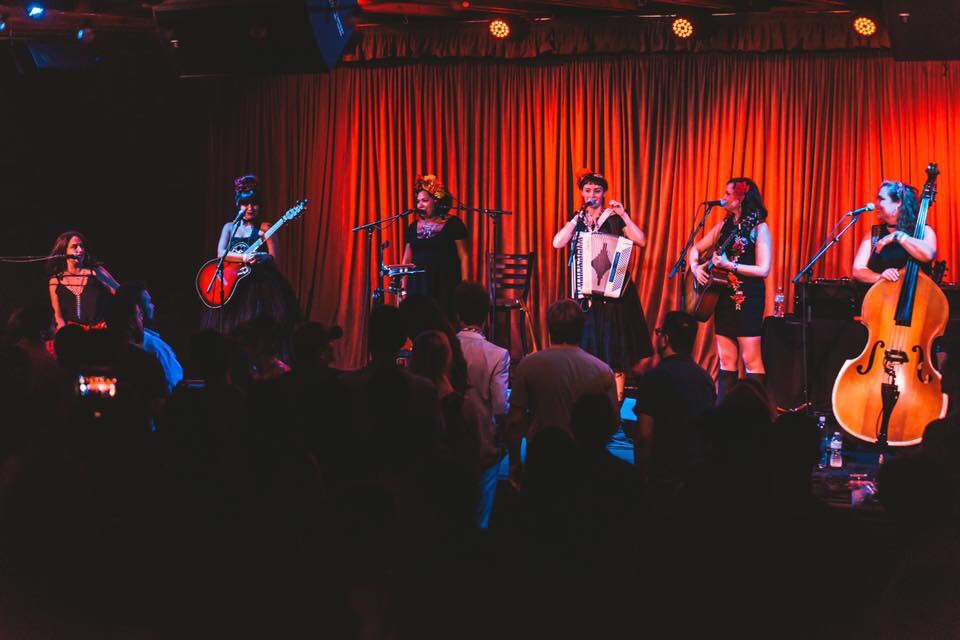 Melissa: We all have experience playing with other groups, so we all bring something different to the table. Arizona has so many interesting and diverse groups, and we strive to showcase each lady’s strengths and individuality. Personally, my song choices and compositions are a reflection of the different acts, musicians and venues I encountered in Tucson.

Marian: Phoenix is growing rapidly, and people are craving new acts, new music. LCP offers a variety of sounds and textures. I think that’s why we’ve been so successful. Our music can be simple or complex, and I think we take people on a roller coaster of emotions. It is rewarding seeing the people’s expressions as they embark on the Chollas train.

Favorite local bands? Who influences you?

Andria: That is a really tough question. I don’t even know where to begin. It’s like when people ask what my favorite song is. That’s like asking which limb I like better. I don’t even know where to start. What genre, what period, based on what criteria? (laughs) I’m kind of a music nerd. The Gaines Brothers are mind blowing, as is House of Stairs, Son LED, NDGO Sista, The Geibral Elisha Movement, Treasurefruit, Lowlands, Playboy Manbaby. But seriously, the list could go on and on.

As far as influences, of course we are the totality of all we have experienced. My parents were/are musicians who played rock, blues, reggae and a variety of styles. My grandparents were mariachi musicians and were also huge fans of jazz. My brother was a DJ who started out at the beginning of hip hop. I had so many influences growing up.

Rachel: This band was formed in the heart of Phoenix with the intention of creating music to bring light to issues involving human rights on all levels—things that affect so many people here. We are the voice of those who are suffering and those fighting every day to rise above and stand strong, despite people trying to knock them down. We are like the cholla cactus we are named after. Our music is our message for all people.

When you’re not busy being Las Chollas Peligrosas, what are you doing?

Melissa: I am a loan officer for a company in Scottsdale, and I really enjoy helping families obtain home ownership. I also love to play mariachi music, so you might find me learning some traditional tunes on guitar or playing with the all-female Mariachi Rubor. Another job I enjoy doing is tutoring Spanish. I also like to cook, hike, read and travel in Mexico. 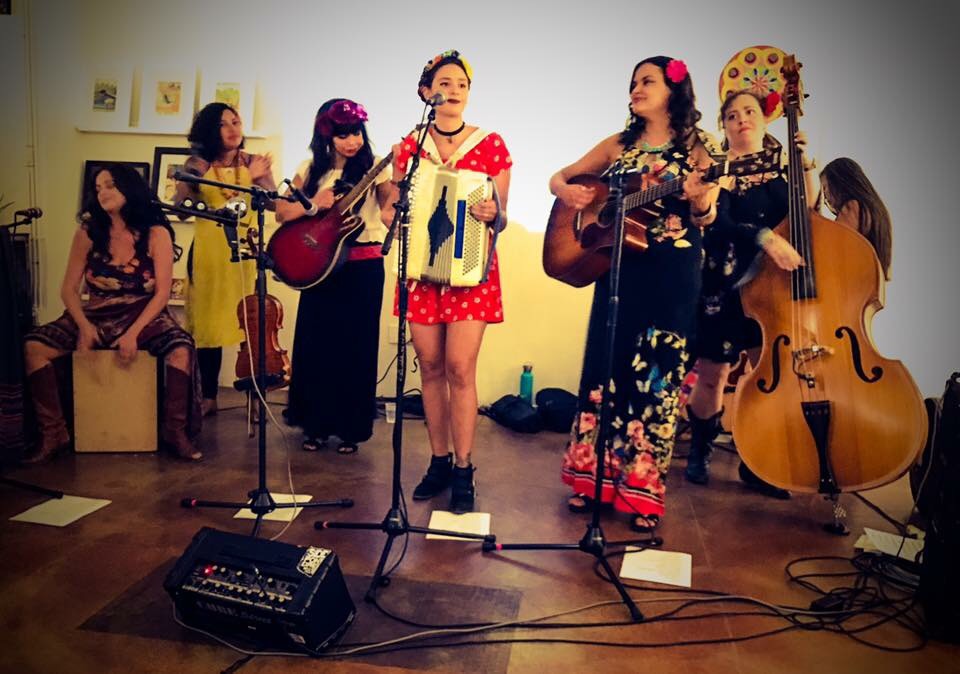 Andria: Usually playing with PAO and working with another idea for a band or show that will take up all of my time.

Rachel: I am a mom of two amazing boys, and I work full time as a stylist at Madison Avenue Salon and Day Spa.

Anameike: You’ll find me on the mic in my rock band Treasurefruit or running around planning the next Sidepony Festival in Bisbee.

Favorite song of yours to play, and why?

Tatiana: My favorite song that we play is “A Medias.” I absolutely love playing cumbia because it gets everybody dancing. It makes me feel like I am the audience and they are the performers. It’s such a fun interaction!

Melissa: I enjoy playing all the songs! The two that stick out are “It’s Not For My Life” and “Cuando Vivia.” On the flute, I really like jamming out to Anameike’s “Triple Fates.”

Andria: One of the most beautiful things about this band is how unique the songs are that each lady brings to the table. If we are missing just one component, it feels like we are missing a limb. Now that these songs are in the fabric of my being, I would feel a profound loss without any one of them.

Rachel: I love playing “Bruja.” Everything about that song and the way the girls play it is amazing. But I do love all of the songs so much.

Anameike: One of the songs that drew me to the genre is a cover featured in our set, and it haunts me to this day. It’s called “Toro Mata.” But things get serious when we strike up the cumbia on our original songs like Melissa’s “A Medias.”