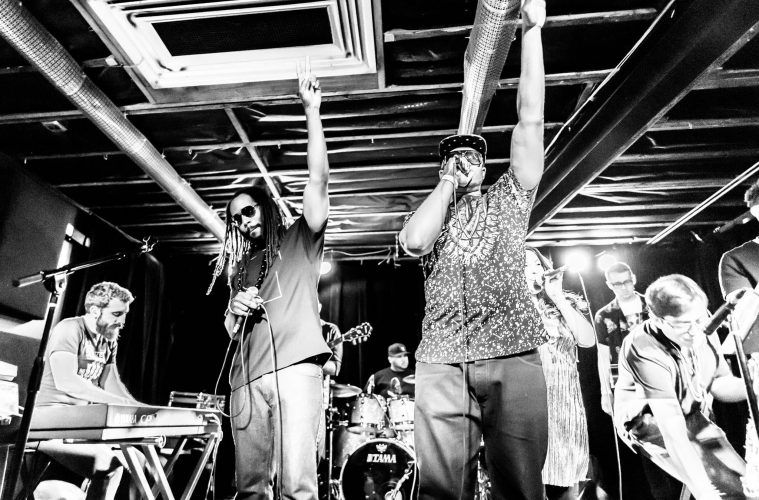 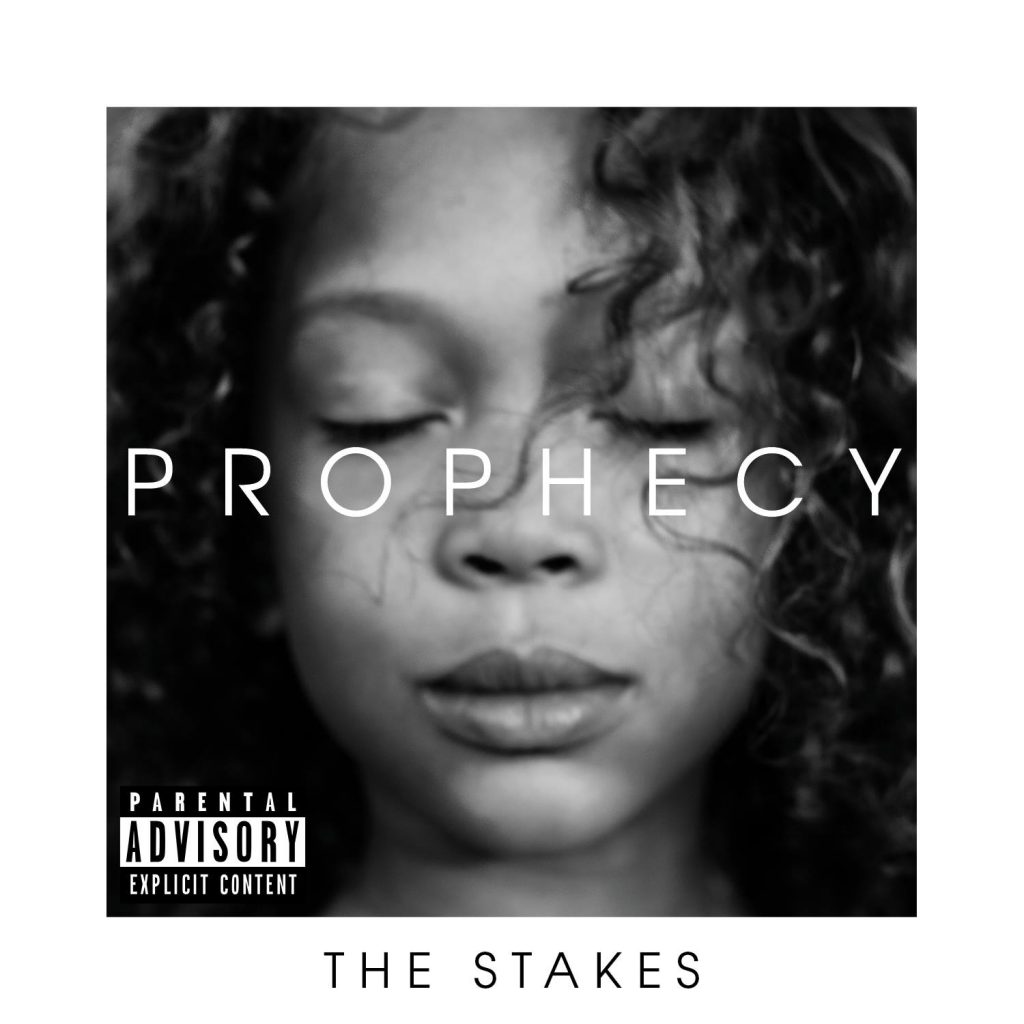 Sometimes great expectations are met with even greater results, far beyond what you could have imagined. Now, I’m known for being pretty enthusiastic about what this local music scene has been pumping out for the last decade, but still, I keep my expectations realistic. That said, the day I discovered The Stakes’ full-length album Prophecy had hit Amazon, I ended up listening to it back-to-back seven times. It was maddening how good it was. I didn’t know whether to dance, laugh, cry, start a riot or run in the streets to express the joy in my veins after spending an entire day with it.

I saw The Stakes a handful of times this year before this release, and I could tell Prophecy was going to be a stunner, especially with the impactful tune “Unified” bringing down the house at their shows. Even after four or five shows, I couldn’t have expected just how powerful this album would be. The Stakes are Marah Armenta (vocals), Lord Kash (emcee), ZeeDubb (emcee), Ben Scolaro (piano), Luis Martinez (guitar), Paul McAfee (Moog synthesizer) and Kevin Phillips (drums). The record also features horns courtesy of Alan Acosta (saxophone), Tyler Bauer (saxophone), Jimmy Barrios (trumpet) and Danny Torgersen of Captain Squeegee (trumpet), as well as vocal appearances from Amber Tabares and I-Dee. Together this crew has made not only one of the greatest hip-hop albums to ever emerge from this scene, but one of the best of any genre.

To call Prophecy simply a hip-hop album is selling it short. It fuses ample portions of soul, jazz, rhythm & blues, spoken-word poetry, pop notions and flirtations with rock. This is American music unified—with clever intellect, introspective maturity and wry commentary on the state of this nation and society as a whole. It’s as self-aware as it is socially aware, as aesthetically artistic as it is unapologetically catchy and hook-heavy. I may be blinded by its brilliance, but I have yet to find a flaw across its 58 minutes (if you include the single edit of “Prophecy,” a bonus track). This is the real deal—a modern vision in motion by musicians tapping their collective consciousness and issuing pure vitality straight from their souls. 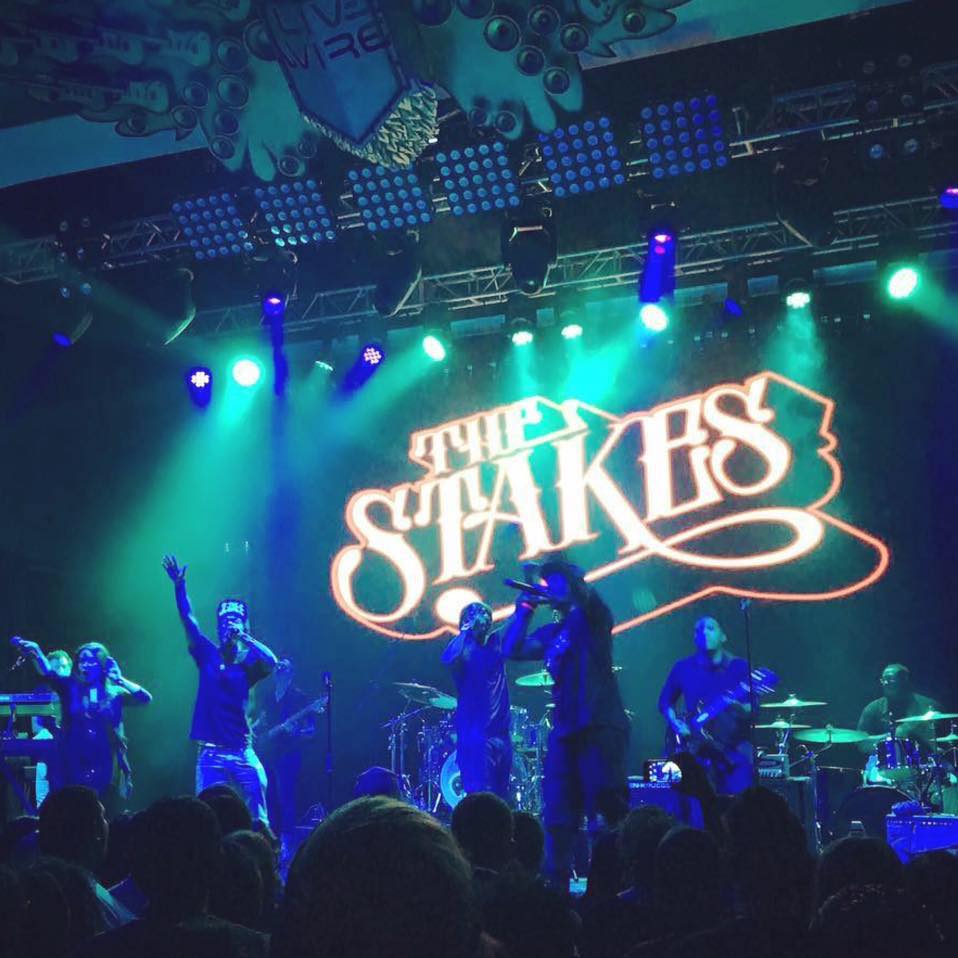 “5 Minutes of Gold” ironically clocks in at 3:35. With a spare guitar riff and some magic out of the Moog, the show kicks off with an intoxicating mix that brings to mind Stevie Wonder and his string of perfect records starting in 1972. There’s an instant groove that gives a 1970s vibe, exploring an untapped universe rarely heard in modern hip hop and R&B, with the possible exception of Anderson .Paak. The rounds created by Armenta and the emcees become hypnotic as the song introduces you to the power of The Stakes 2017. Following in its wake is the soulful “Then and Now,” a song that Sade would have killed for in her heyday. Once more, there is an underlying current of Mr. Wonder here—with arrangements to make him proud. As each movement passes, the album just becomes more engaging, and the ear is captivated by the lyrical paintings and intricate arrangements.

When I first listened to Prophecy, I noted the Stevie Wonder influence in the first two songs, but I did not anticipate a cover of one of his greatest tracks, “Master Blaster (Jammin’).” It’s always been one of my favorites, and 1980’s Hotter Than July was the end of his genius run, in my estimation. The cosmic rap that occurs as the bridge here is divinely inspired and feels perfect in its placement. They have made a Stevie Wonder hit uniquely their own, and that is not something that can be casually done by any means. It’s a standout track and one that only bolsters their reputation as artists. 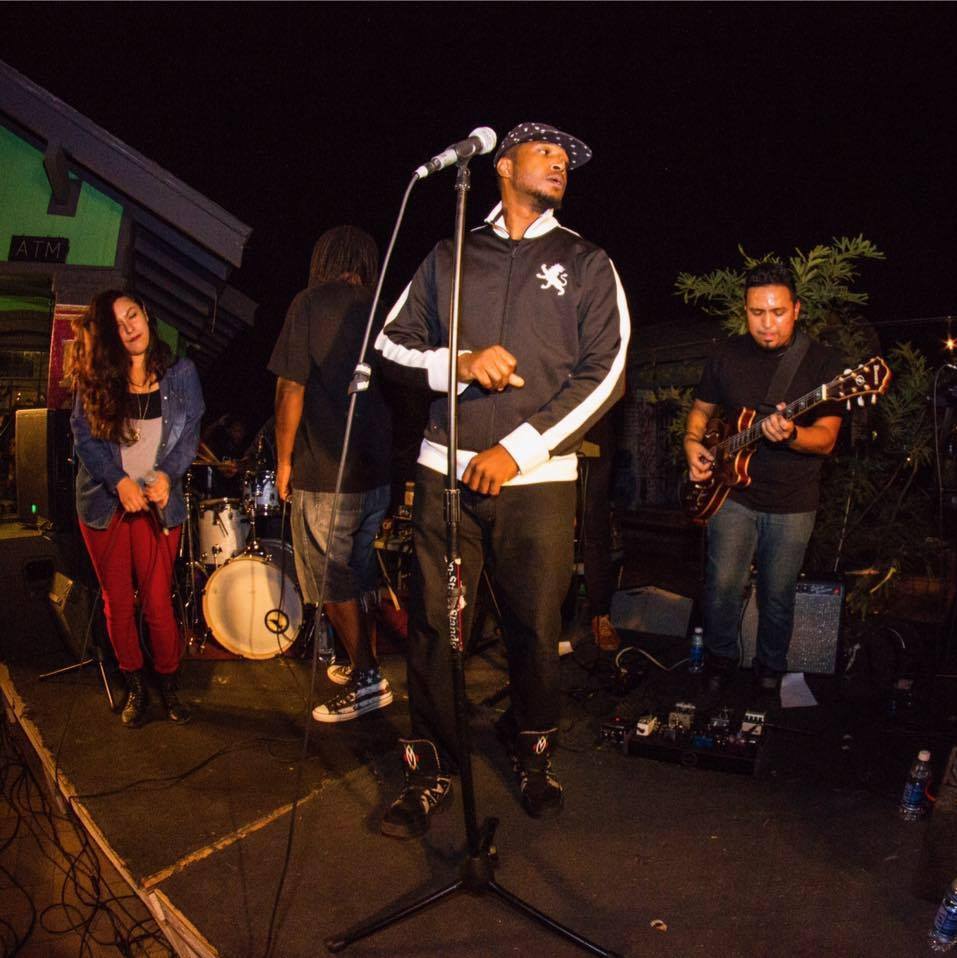 The title track takes a decidedly political tone with samples of famous speeches from civil rights history in America. The entire lyric is a work of art that swiftly sums up the conditions of the working class and their position under the thumb of modern America. While the necessary venom builds, the musical backdrop is absolutely intoxicating, soulful jazz. I wanted to transcribe the whole damn album, but the lyrics should be heard firsthand, because they are as important as the excitement the music induces. The stories told in the verses are harrowing, realistic and touching, while the beauty of the chorus provides a stunning contrast.

“Blue Jean Intro” is a spoken-word piece featuring Tabares’ poetry over a minimalist piano line, and you can imagine every powerful moment she describes while the music pulls at you emotionally. Ending with the refrain, “All things built strong do not fall apart,” it leads to Spanish guitar wanderings at the start of “Blue Jean Grey,” a soothing number soaked in jazz and soul. The protagonist is off her medicine, and conversations turn to the goddess within that every woman holds. And while the world makes her weary, you hope that in the back of her mind she’s reassuring herself that all things built strong do not fall apart. It’s about the obstacles a woman faces in the modern world while desperately needing to release the divine power within. It ends with a haunting reprise of the intro. The pop punch in the bridge would make a catchy tune in itself, but here it serves as an up moment in an overall outlook that is desolate.

There is something familiar in the groove that begins “Crosseyed,” but I can’t put my finger on it. One thing is for sure, it shows how hip hop is served by original music, made by an actual band with real instruments. This is where I find the similarity to Anderson .Paak once more, and this tune would make a fantastic crossover hit that could climb many charts at once. It’s got a classic feel that’s totally revitalized by the call-and-response connections between the three vocalists. It’s almost as if they’re exploring different sides of the same consciousness or an omniscient view of those involved in a complicated relationship. As one of the most beautiful tracks here, it could garner them attention well beyond the world of hip hop.

The tropical feel at the start of “I Can’t Help It” is as inebriating as a Mai Tai. While Armenta’s vocals are lush and sultry, the infinite percussion and keys kind of steal the show. The arrangement, the very architecture, is as fascinating to study as the song is rewarding to simply enjoy. Once more the feeling of the 1970s saturates nearly every golden moment. It’s damn near mesmerizing and evokes an atmosphere far too rare in modern music. “Requiem” is another political number with more samples and a confluence of actual and synthesized percussion that makes my head reel on every listen. It creates an anxious mood, like a movie soundtrack, while it refers to systemic racism and the atrocities committed against black people in America, where capitalism takes precedence over the idea of freedom for all people. It is one of the most powerful tracks here and is painted with honesty straight from the street.

“Unified” features I-Dee and was a song I noticed in their live set above all others. It is possibly the strongest song on this record in consideration of both the lyrics and the music and could be as much of an alternative rock hit as it could storm the hip-hop charts. I seriously believe that if they release this as a single, it will take them far. While I find myself swaying to nearly every song, this one demands I dance through the entire thing. It serves as a false finale for the album, but if it had finished on this number Prophecy would still be perfect. Regardless, after a few spins you’re going to find yourself chanting “Fists up! Thank God that we’re Unified!” After three and a half minutes of it the album seems done—but wait, there’s more. 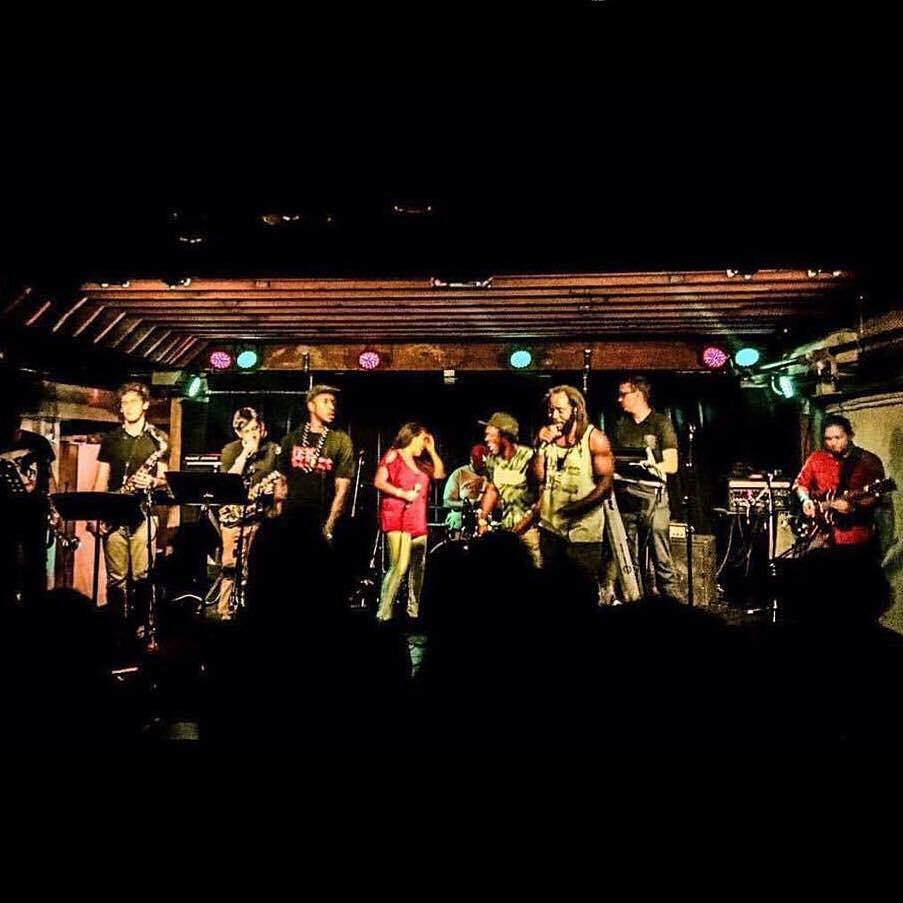 The Stakes finish it out with a hidden track. “House Party” is a perfect way to go out with a bang while summarizing the band perfectly, both in their composition, their live show and their album: “We turn every show into the best house party ever.” And to be perfectly honest, they do exactly that; they’ve even won awards for it. The online album includes a single edit of the title track, which legitimately makes you just want to listen to the whole thing over again. And you will.

Anyone that says Phoenix doesn’t have a thriving hip-hop scene may want to get their head checked and pick up this album on the way. Maybe they need to reacquaint themselves with what actual artistry in the genre sounds like. Prophecy sounds less like an actual prophecy and more like complete and total authenticity. Thank God that we’re unified.