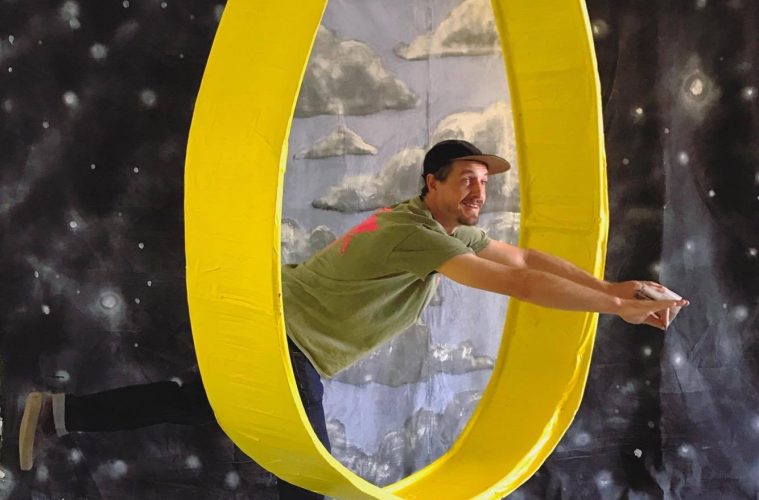 JJ Horner’s latest collection of work, titled Pattern Recognition, is rich with symbolism and bold imagery that is fused with surrealism. Megaphone PHX, in central Phoenix, is showcasing this dynamic collection of work, including both painting and sculpture.

Horner is originally from Wilmar, Minnesota. He moved to Arizona in 1998, going on to receive his associate degree from the Art Institute of Phoenix in multimedia web design. He began creating art full-time after a serious skateboarding injury, and he currently splits his time between his art career and his apparel/production company, Pyramid Country. 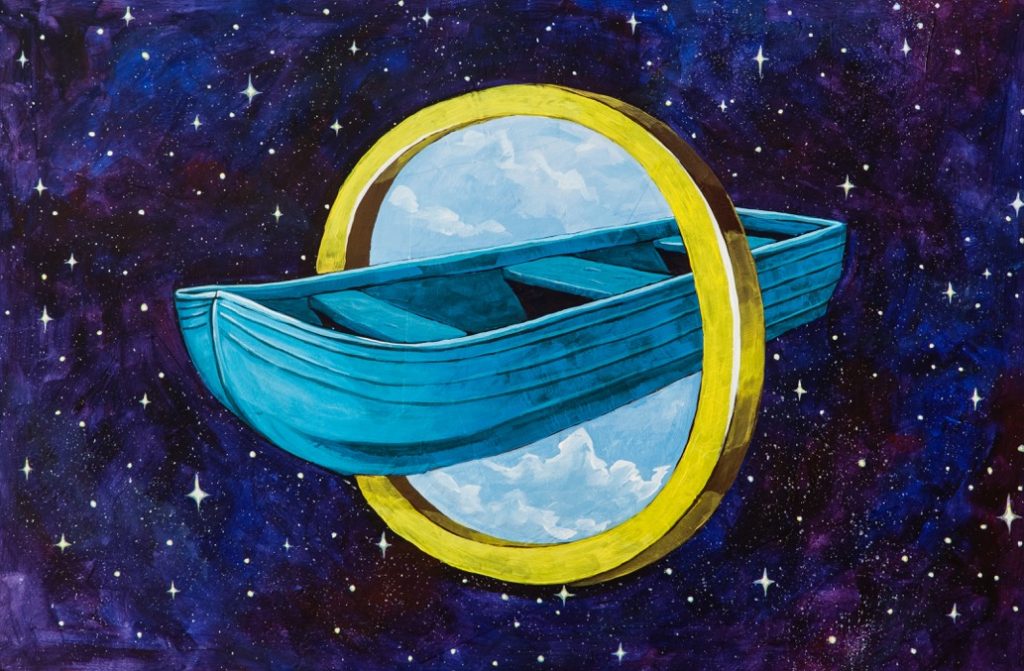 Horner has also been actively creating murals around the Valley, including recognizable pieces “swimmin’ in ’er” and “Good Morning Arizona!” at Flowers Beer and Wine in the Roosevelt arts district, an area currently undergoing extensive gentrification. Horner has also collaborated on several murals, including one at the Nostra Style House building alongside artists Tato Caraveo and Tyson Krank.

Pattern Recognition has been years in the making. Horner originally met Andy Brown (SoldierLeisure) through Michael David Little more than four years ago. They bonded over their mutual love for both ping-pong and art. Horner said, “It was ping-pong that brought us together, and we remained friends, both becoming fans of each other’s art. After a few years, you get an idea for someone’s work ethic, and Andy has that.” Not long after the launch of Megaphone PHX, Brown offered Horner a solo exhibition.

The opening reception took place April 21, with a fantastic crowd and live music from Pines of Torrey. This was followed the next day by a ping-pong tournament and a Pyramid Country pop-up shop. Horner was pleased with the turnout and the response to his work. He is looking forward to the closing weekend celebration, running Friday, May 5 (from 8 to 9 p.m.), through Saturday, May 6 (2 to 6 p.m.), and concluding on Sunday, May 7 (noon to 2 p.m.). 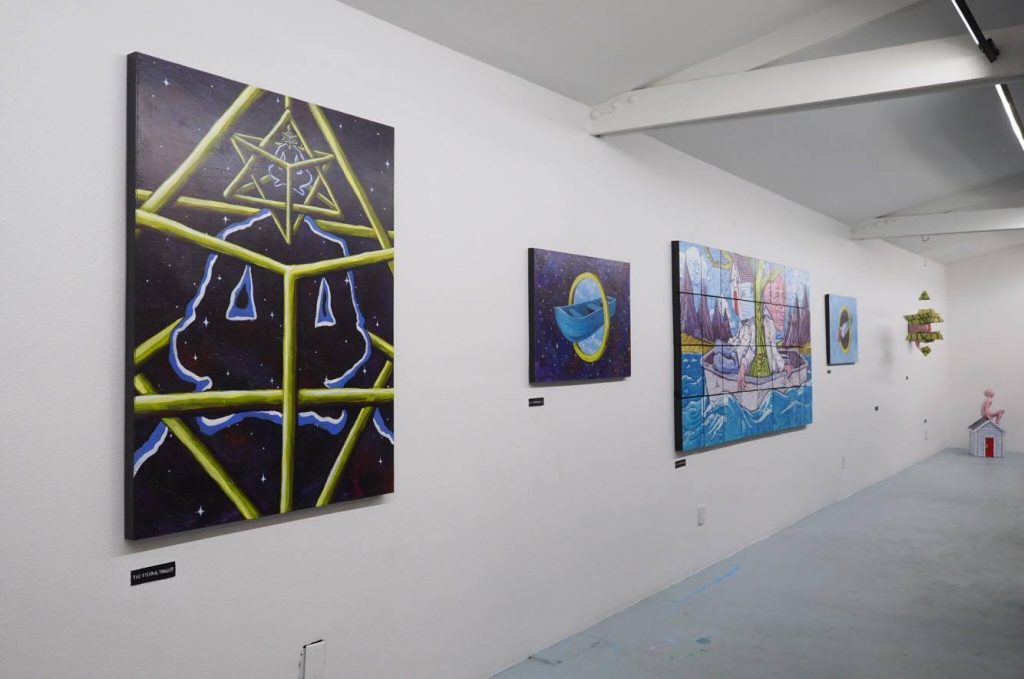 Horner’s new body of work began with the creation of the Flowers mural “swimmin’ in ’er,” which, he says, “really personified these images, where they sit in a semi-circle in a pool of beer cans in an obvious heated conversation.” Horner wanted to keep that energy and direction throughout the exhibition. The new work took about eight months to produce, focusing on reoccurring images of animals, houses, space and figures, as well as the iconic Pyramid Country logo, which is inspired by a star tetrahedron (a 3D star of David found in Metatron’s cube). Horner says that the “bricked version is a play on the mystery of great pyramids around the world and symbolizes our repressed human potential.”

His work employs important elements of surrealism, including an emphasis on free-form content. Horner incorporates a process similar to automatic drawing to record images from his subconscious. His work shows an interest in self-exploration, as well as ideas of reality versus the dream state, with nods to the great surrealists, including Dali, Magritte and Tanguy. Horner begins each piece with “free-form ideas,” influenced by everything from conceptual art, skate culture and illustration to family history.

He relies on what he says is a “vast universe of personal symbols and archetypes that find their way to the surface of my paintings.” “Vessel in Passing 3” is a striking 32-piece, 4-by-8-foot “sectional painting” that depicts an intricate landscape, highlighting various figures and animals that seamlessly blend and morph.

Horner creates large painted studies that are graphed and cut out on a grid, then transformed, allowing chance and the subconscious to take over. The result is a dreamlike blending of personal imagery and unresolved stories that the artist calls “street surrealism.”

Pattern Recognition came from the physical act of recreating the panels of the sectional pieces, “much like finding a bunny in a cloud,” says Horner, adding that the collection “became almost an award ceremony for the recurring symbols that pop up in my work.”

When we spoke about his art practice and creating sectional pieces, Horner said, “I transform one panel at a time. Individual sections become both contained compositions and elements of a larger one, creating an interplay between structure and flow state—finding resolution in shape, form and thought.” This collection offers a vibrant color palette, strong lines and interesting textures that draw the viewer into the pieces, with many images and symbols hidden throughout each section.

Ken Richardson, manager of the Ed Mell Gallery, said, “I feel that JJ Horner has come a long way since the live-painting years at the Paper Heart, when we first met.” He went on to elaborate, “I appreciate his reoccurring use of house, space and figure. It gives me a surreal sense of what ‘home’ could mean when it hasn’t been established yet.”

Richardson continues, “Over the years, his increased painting skills, along with the ability to make sculpture and create designs for his skateboarding clothing line have been very impressive.” 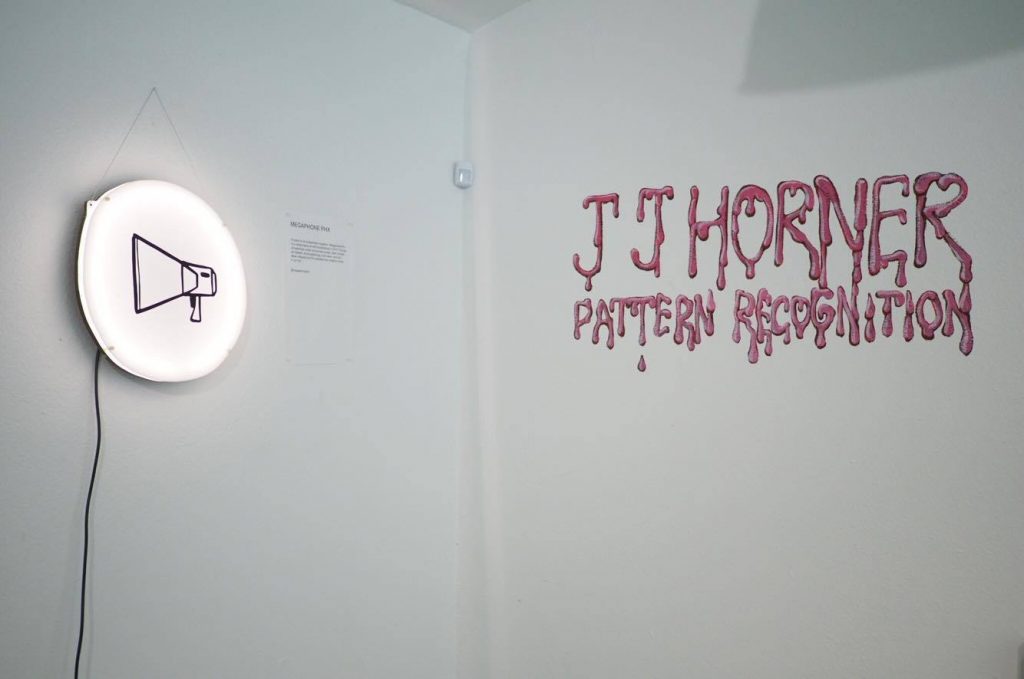 Pyramid Country is a skateboarding-centric apparel and production company that was formed in 2012 by JJ Horner, Bobby Green and Jackson Casey. They make hats, t-shirts, mugs, stickers, limited-edition prints and more. They have produced numerous skate videos and recently released “Exeter,” their first full-length DVD. 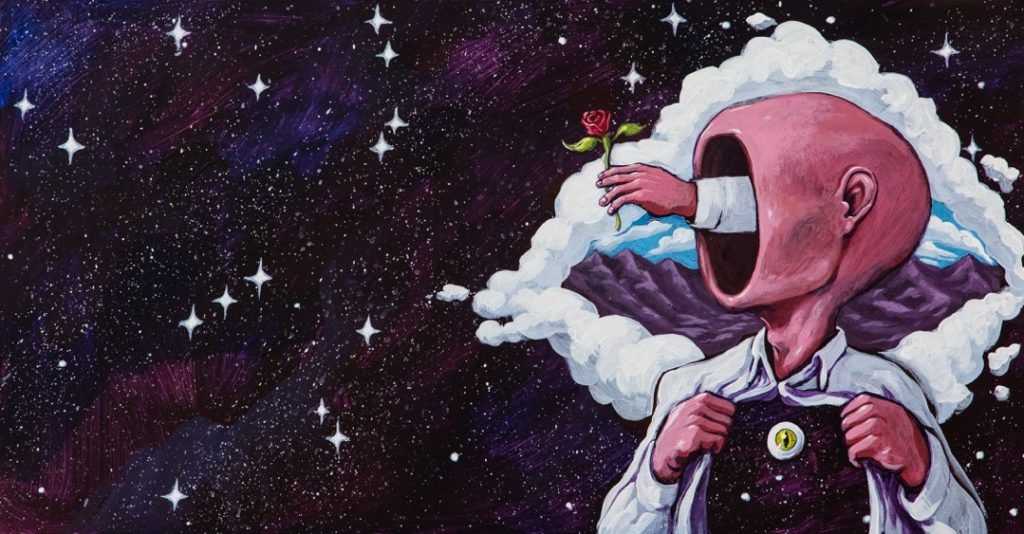