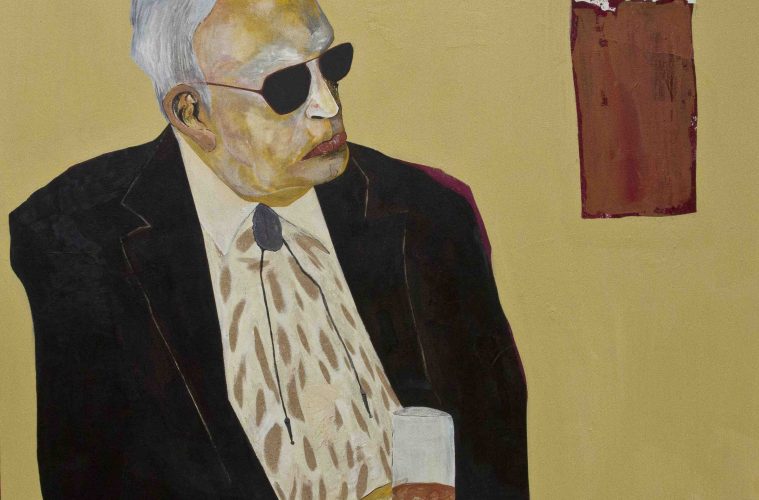 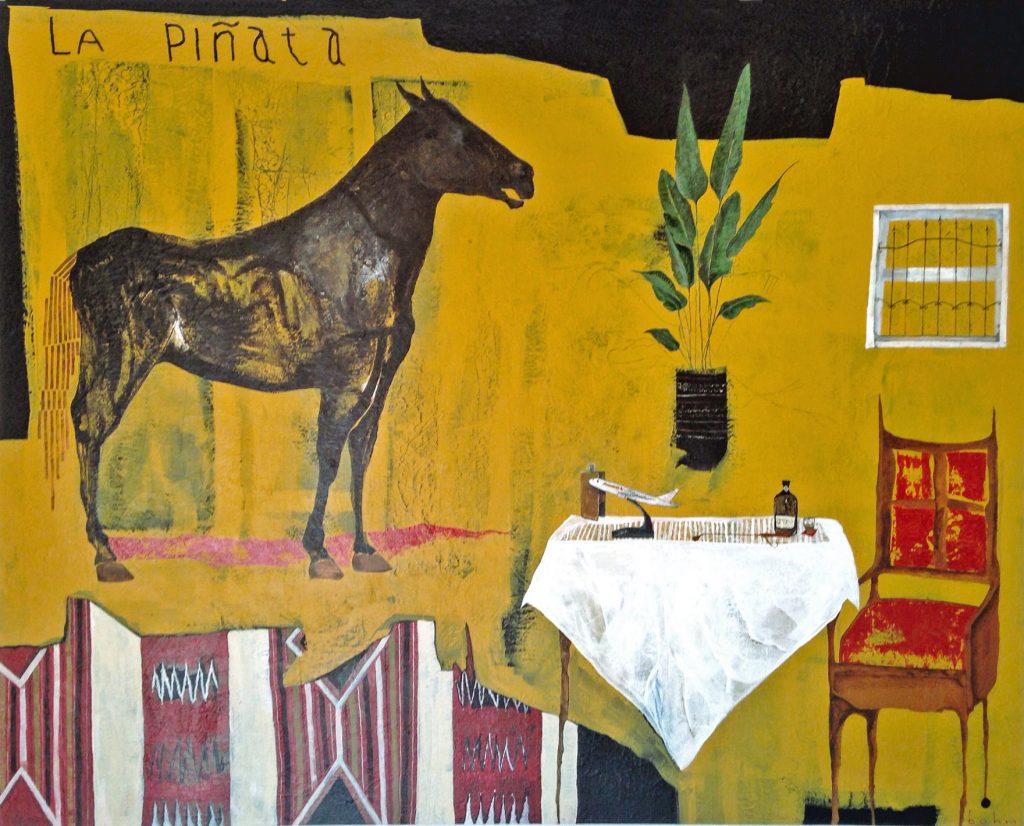 Native Phoenician and emerging self-taught painter Geoffrey Bohm makes his debut with a solo exhibition at The Hive. Titled Trotting Through the Glue Factory, the show features a cohesive, yet diverse collection of works created over that last few years. Bohm’s paintings have a raw quality that effortlessly captures life’s everyday struggles in an unfiltered and often crude manner.

“Geoffrey’s work provides a peephole into the world of the down and out, a celebration of hard times, and the strange and the beautiful,” says The Hive owner and curator Julia Fournier. “Trotting Through the Glue Factory is a collection of paintings I did following a series of personal downfalls,” says Bohm, who went on to say, “The work is essentially a toast to the many strengths and weaknesses of the human spirit. It’s about ‘trotting’ through life without limitation.”

Fournier knew she wanted to exhibit Bohm’s work after seeing only a few small pieces. “I was surprised that he had never shown before, never sold work and that he is virtually self taught,” says Fournier. “As a second-generation native Phoenician myself [Bohm is as well], the images are familiar yet strange, intense and magnetic in a way.”

“In 2013 I was drifting from one place to another, moving in and out of spare bedrooms and apartments and through all the madness, I was still working on art in some capacity or another,” says Bohm. This was when he decided to focus solely on painting and only recently began exhibiting his artwork, participating in a few group exhibitions at the {9} The Gallery. 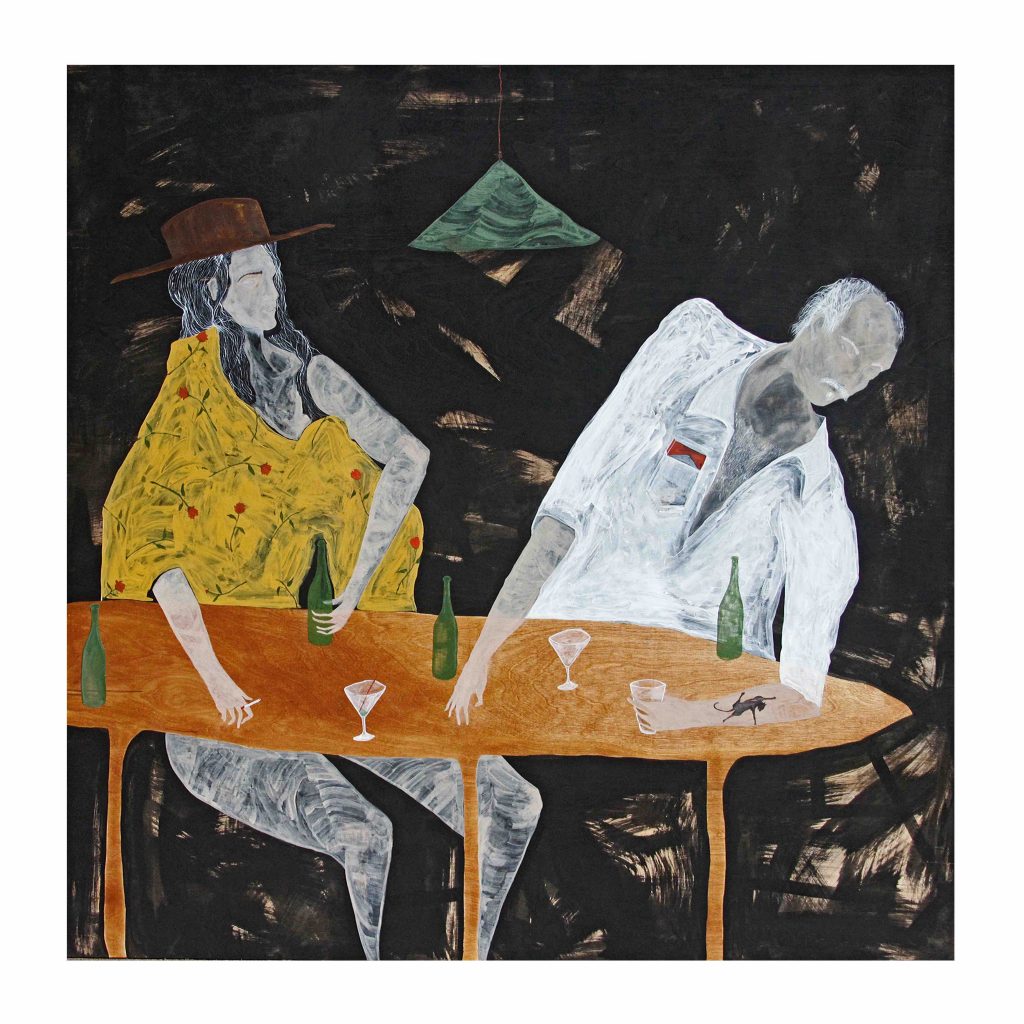 Bohm’s subject matter is engaging with a distinctive style that utilizes graphic lines, subtly distorted forms, explosive brushstrokes and a rich color palette. He has created a world filled with eclectic array imagery, symbolism and fantastical characters, as seen in intriguing works like “Trigger Fingers” and “Stable hand in a Ketamine Hole.” His paintings seamlessly blend pop art with expressionism, with a post-modern sensibility. He is inspired by “Picasso and Matisse who both created masterpieces at such a furious rate. Contemporary British painters Danny Fox and Samuel Bassett, along with LA-based painter Henry Taylor, have significantly changed the world as I see it,” says Bohm.

His paintings offer a modern aesthetic reminiscent of Fritz Scholder with surrealist undertones. This is evident the painting titled “White Man with Double,” a striking portrait of an elderly man decked out in a suit and sunglasses, sitting alone drinking. Fournier describes Bohm’s work as having, “Southwestern boozy tones, with beautiful losers and honkey tonk regulars, like out of a Robert Rodriguez movie.” Bohm also presents several mixed media works that incorporate an interesting combination of materials including anything from cardboard and gold to Oxycontin. His piece “Rolls” depicts the many faces of gambling and integrates dice and imagery of a racing dog.

Bohm is excited for 2017 and plans to focus on exploring new techniques and mediums. 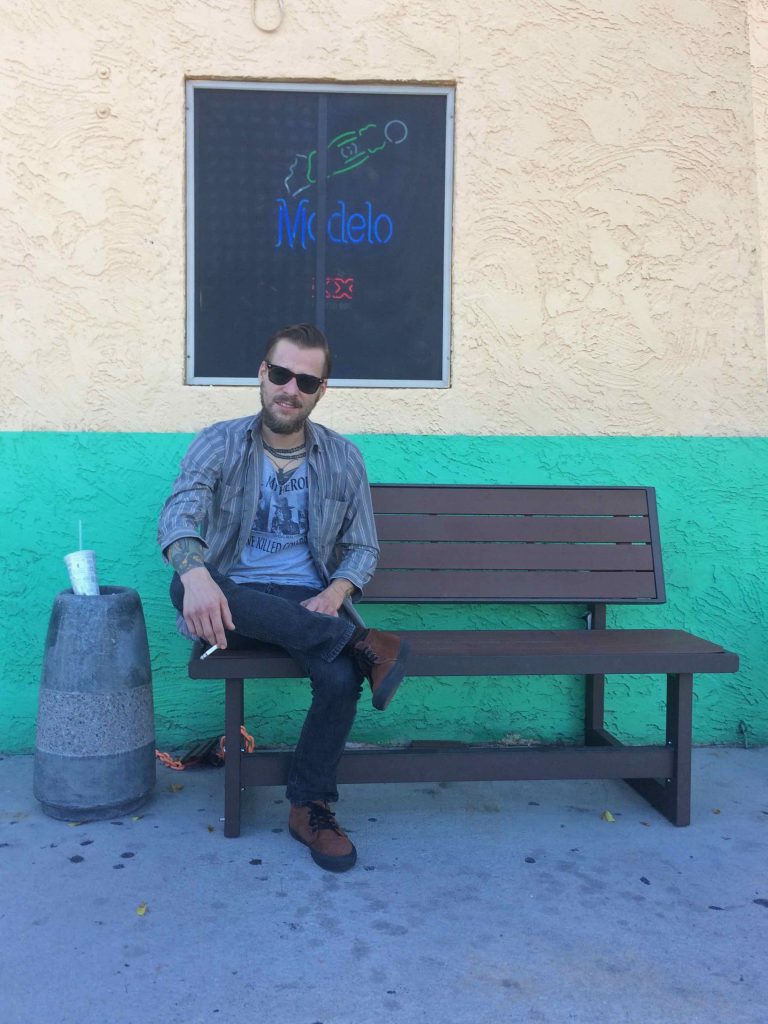