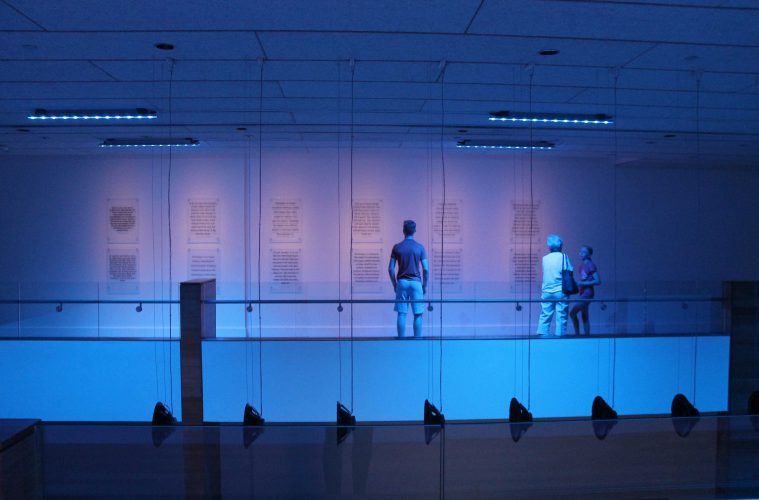 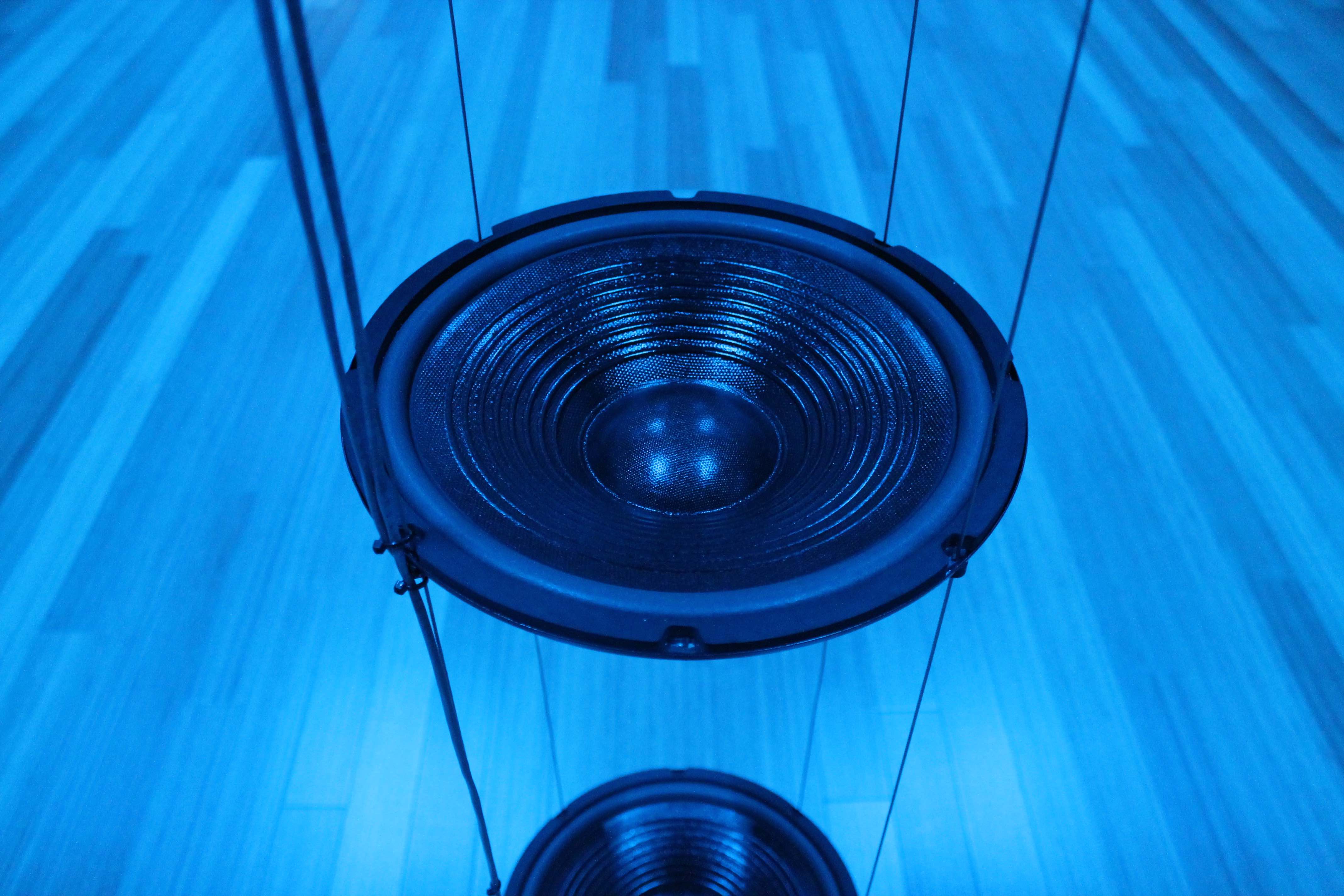 Raven Chacon’s Still Life No. 3, on view at Heard Museum through November 3, retells the Navajo creation story, Diné Bahane’, in the form of a sound, light, and text installation. The story tells of colors rising in the sky, signifying not only the shifting of time but also the emergence into another world. Over the course of museum hours, timed lighting throughout the space shifts across a spectrum of red, blue, yellow, and white. Spoken excerpts of the narrative, recited by Melvatha Chee (Diné), reverberate across sixteen floating speakers arranged in a line, as if propelled into motion.

The bursts of Chee’s voice begin at one end of the space through a speaker situated vertically just above the floor. As she continues to recite the story, the sound moves directionally from one speaker to the next, ultimately leading up and across to the other end of the gallery. The individual layers of her voice pile atop one another, creating a series of starts-and-stops that generate the effect of an echo or feedback loop. 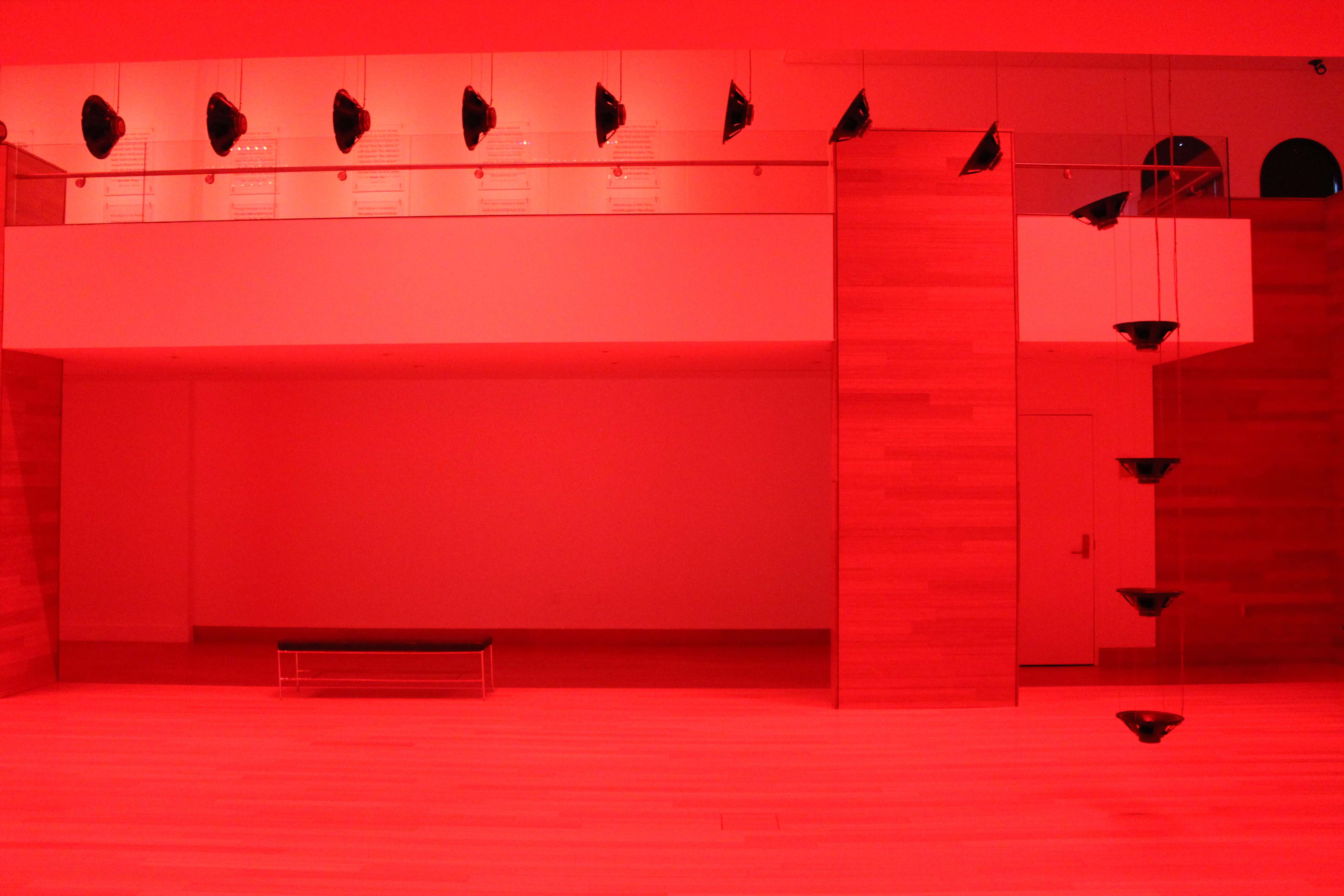 The original text and its English translation, reproduced as a double-stacked sequence of transparent panels, is displayed along both sides of the gallery’s upper level, overlooking the sound installation. The words themselves are doubled by their shadows, producing the kind of repetition Chacon crafts with audio and delay in the gallery below. The wall panels, which usually serve a didactic purpose and provide a sense of orientation, here become ungrounding.

Chacon’s approach to written and spoken language emphasizes its fraught relationship to time. Reading and listening are activities that are inextricably of the present moment, whereas what is written and spoken is anchored in the past act of doing so. Any given text and its interpretation are contingent on a presence that never stops renewing itself. 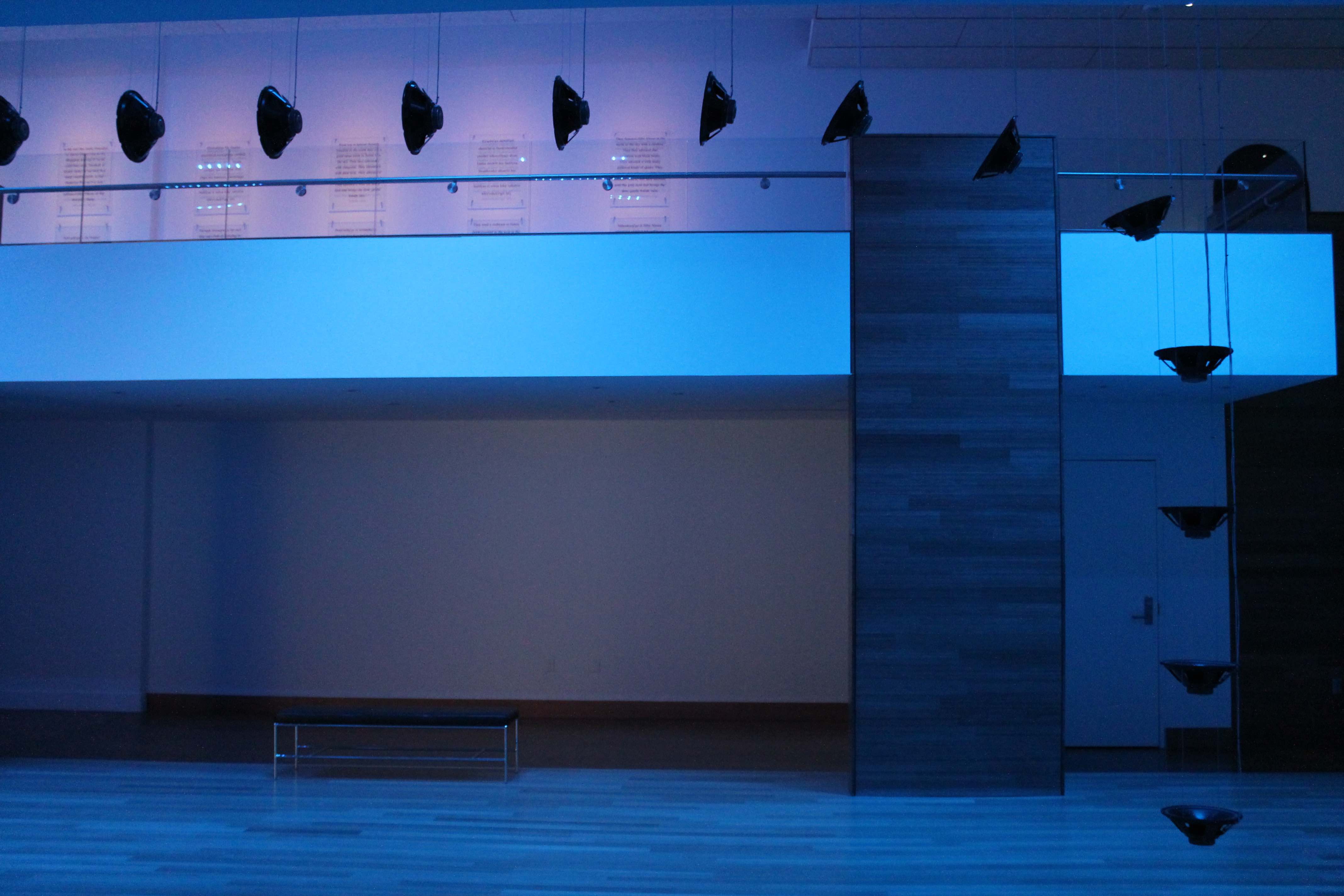 The tradition of still life painting to which this exhibition makes reference in its title often sought to capture the frailty of life. These compositions depicted allegorical objects that were subject to decay. As a picture, however, these everyday items – flowers, fruit, vessels, and more – effectively become frozen in time.The still life occupies a space that is simultaneously marked by the past, visible in the present, and projected toward the future.

The perceptual experience that this installation stages complicates our relationship to time on micro and macro scales. As light and sound change over time at different intervals, seeing and listening fumble to keep up. Although all components refer to the same source material, Chacon’s treatment of each as its own compositional element creates a situation in which there is no sum: no beginning, no middle, no end.

Chacon’s parsing apart of his subject matter generates meaning on linguistic and symbolic levels. Here Diné Bahane’, an origin story packed with mythological and cultural significance, is rewired and resituated within the context of modernity. Placed in this constantly refreshing environment, in which time never ceases to move forward, the viewer’s phenomenological footing is in flux.

The narrative forms and reforms over a series of soundbites and excerpts. Any attempt to follow along may result in getting lost. It seems that Chacon shares the fragmented version of this story as a potential metaphor for our way of being in the world. We emerge into it every day and attempt to ascribe meaning to its constituent parts, but these parts move in perpetuity. Within this mesmerizing void, the viewer is left to consider the totality of time, language, and space. 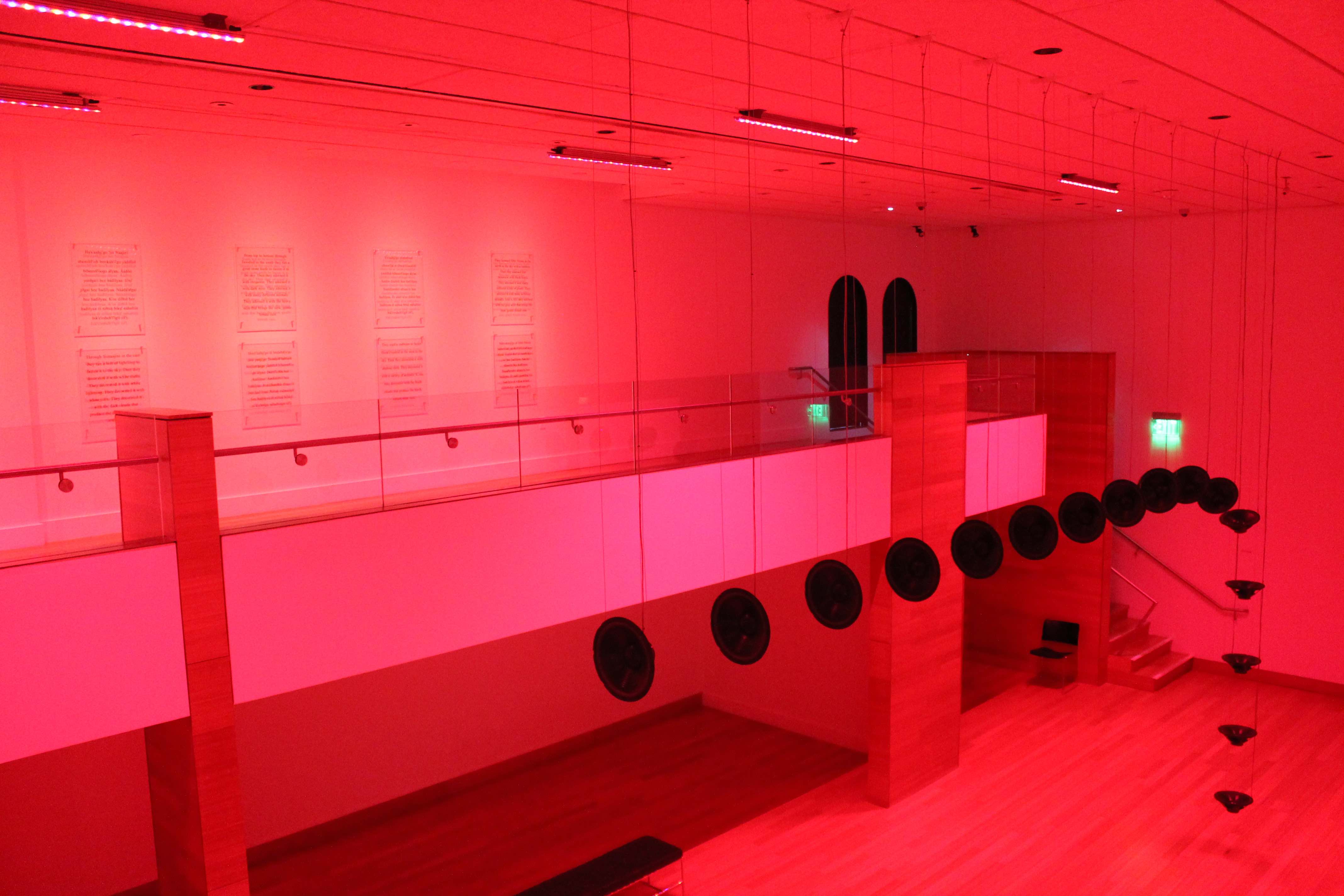 As a whole, the installation engages with the overlapping of past, present, and future. Chee’s echoing voice above travels like an apparition through space. Listening and reading become cyclical, meditative acts that make us aware not only of our presence but of time. This awareness is especially evident in relation to light. Timed on an eight-hour cycle each day, the lighting provides a structure that reveals to us that there was a before and that there will be an after.

Still Life No. 3 stages a situation for viewers in which they are guided by the sensory. Through retelling the story of Diné Bahane’ in metaphysical terms, Chacon transforms it into a nonlinear narrative that is conveyed through individual and collective presence. Pairing storytelling and formal gestures, the installation captures a sense of spirituality that spans across cultures and time.