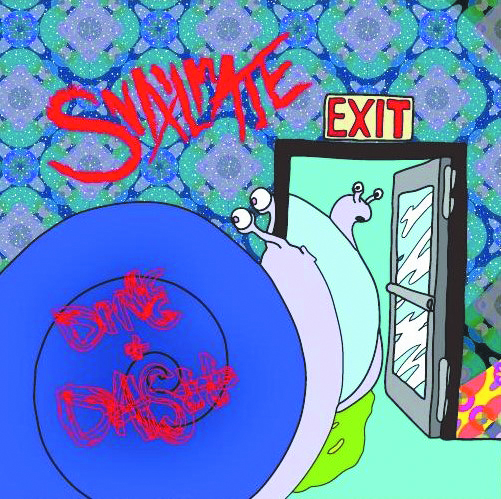 Quick on the heels of their debut EP, Snailmate has somehow found time between tours to release a sophomore effort of heavy synth-hop fusion. Dine +Dash is a six-song EP that further establishes the unique sound and vision of the duo Kalen Lander (TKLB?) and Ariel Monet (formerly of Sister Lip).

The record begins with the first single, “Jumper/Cable,” which is probably their most excitable song to date. To be fair, this is the soundtrack to videogame nightmares, but in a good way. Just listen to Monet screaming “Jump!” and wait for that to turn up in your dreams. It’s disturbing and catchy, but that’s how most of this EP is. “Worry Wort” follows and seem to be cut from the same mold—clever lyrics, screams and all. The light synth-hop brilliance of “Virtuous Reality” is a highlight, and Lander’s rap almost comes across as spoken-word poetry.

“Both” is one of their most interesting ventures musically and would make a great follow-up single. Meanwhile, the drum track and synth work on “Doctor’s Blues” blow my mind, and this lyric by Lander, “I swear there’s no god but I can’t prove it” followed by Monet’s shout of “It’s true!” is brilliant. “Boogie Man” finishes this installment with some aggressive and infinite weirdness, both lyrically and musically.

One great thing about Snailmate is that they cram so much into a song that you hear something different every time—whether it’s a strange sound effect or a lyric you never noticed, usually one that makes you laugh. These are the sounds of a couple of crazy musicians in love, and their music is some of the most unusual and unmistakable in the scene right now. Be sure to catch Snailmate at Time Out Lounge on February 12 for the release of their EP.