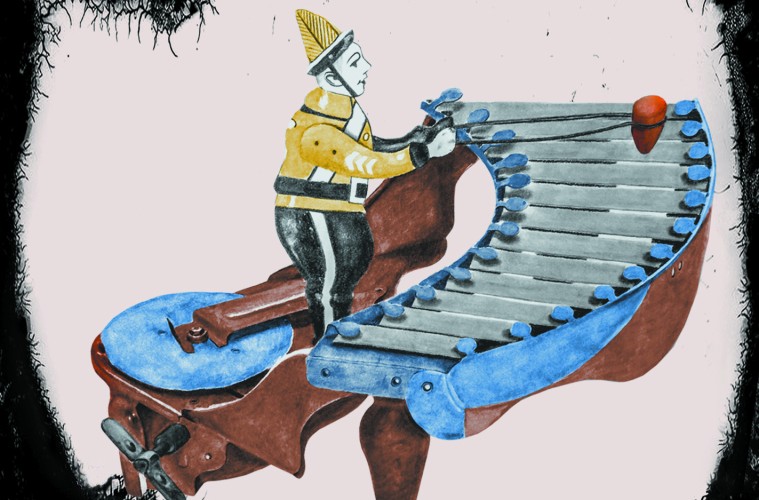 RPM Orchestra | Hit on All Sixes

If you’re looking for a truly weird time, musically speaking, I have just the album for you. Hit on All Sixes by RPM Orchestra appears to be an EP with only five tracks. Turns out, it’s a full album, clocking in at over 40 minutes. Stylistically, it is a roller coaster of genres, some of which can’t even be defined.

Any album that contains “instruments” such as AM radio, typewriter, shortwave radio, washboard, Tibetan singing bowls and industrial springs should pique your curiosity.

It doesn’t seem all that strange when it kicks off with the first single, “Bury Mine,” which is a roots-banjo number steeped in backwoods folk and Americana. It’s pretty straightforward and features Jim Dustan, Erik Hunter, Pete Petrisko, Jocelyn Ruiz and Vic VOID. This perception of normalcy is immediately shattered by the 14-minute “Bait & Switch,” an avant-garde thought piece that is mesmerizing and endlessly fascinating. For some reason, it puts me in the mood to listen to mid-period Coltrane for hours. It’s not really free jazz by any stretch, but it has that spirit.

“Song of Sheba” is the only other song on the album that could be considered a single, with Ruiz delivering some splendid vocals, as well as a haunting toy piano part. It’s almost a pop song, but from another dimension via a demented circus. What follows is unexpected at best.

quite literally in the most deconstructionist way possible. Based on Debussy’s Sonata for Flute, Viola and Harp (none of which are used here), it sounds like what would have happened had early Sonic Youth decided to take on classical music. It is an epic journey. “Untitled (Rebirth)” is a mournful, droning instrumental that provides the perfect finale to a wonderfully bizarre and breathtaking release.