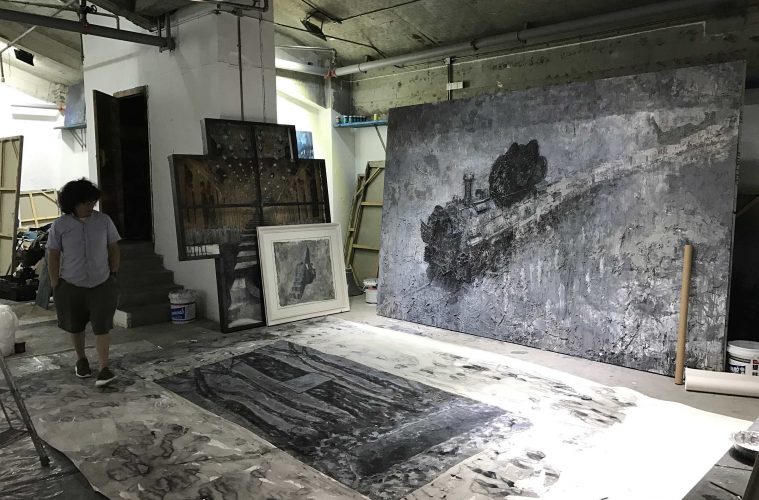 Pairings in art are rarely as inspired as seeing the works of Mark Pomilio and He Gong in the same room. The Mesa Contemporary Art Museum (MCA) brings together two painters with distinguished careers who have had radically different experiences in life and come from counter-distinct artistic traditions. While the deep resonances between these two might not be readily apparent to the causal viewer, what they have in common illuminates the works in this exhibition that much more poignantly.

The first marked reference you’re likely to recognize in this show is a diptych by He Gong depicting Ludwig Wittgenstein and Adolf Hitler as children, giving us the image of another unexpected pairing. Entitled Classmates acts as a cipher for understanding the dynamic contrasts at play in this visual duet. After all, this exhibition has everything to do with how we understand the different states of being that lie behind the epiphenomenon of surface appearances.

One could even go so far as to say that this singular motif is the mainstay behind both artists’ oeuvres. He Gong’s work unveils the depth of suffering associated with having been imprisoned in labor camps in China before he was allowed to attend school in the U.S. By contrast, Pomilio is recognized for his sustained investigations into the abstract forms that structure the known universe. And yet, both artists make work that seeks to elucidate what is barred from our everyday view of the world, whether by natural or political constraints.

In this way, we can say that He Gong’s imagery carries a strong political charge, while Pomilio’s aesthetic is as active as the charge behind atomistic and fractal worlds. Both artists trade on the subtle handling of painterly materials in a manner that is decidedly deft and expressionistic. Made up of different processes of layering that deploy the pentimenti of line, texture, and touch, both He Gong and Pomilio produce imagery that has a powerful iconographic effect.

Toward this end, the image of a single figure and horse looking out at the Statue of Liberty, pictured in Back to New York 1 and 2, conveys a sense of He Gong’s journey to explore the inner and outer worlds of freedom. The atmospheric rendering technique used in these works transforms them into a symbol of the liberated spirit. Conversely, this double set of images can be better understood in juxtaposition with He Gong’s other works, such as Last Rites and The Herbalist, both of which express moments of distress for their protagonists. Pictured naked and beset by rather ominous bullhorns, these forlorn figures seem to inhabit a surreal dreamscape that conveys a sense of fearfulness, the idea of convalescing, and the notion of facing those terrors that haunt us from deep within the unconscious mind.

And while the political unconscious is certainly the subject of much of He Gong’s work, it is the archetypal unconscious that structures the ideas behind Pomilio’s painterly imagery. Having fully absorbed and transcended the lessons of abstract painting from the twentieth century, Pomilio has established himself as a more poetic voice than Pollock or Brice Marden when it comes to creating elegant and lyrical compositions. But one would miss the subtler qualities of how Pomilio is able to capture a sense of multidimensional space in his works if they didn’t take note of how his diffuse planar geometries owe just as much to the spatial intimations of Baroque art as they do the gestalt impact of the moderns.

And yet, if we could go a step further in thinking about the relationship between these two artists, one might even say that the folded, interlocking, and haptic forms associated with Pomilio’s contributions to the show could serve as metaphors for the interconnected and multi-faceted aspects of the mind. Even Pomillio’s titles, such as Symbols and Symmetries, Elemental I & II, or Primal Motion, resonate with He Gong’s use of asymmetries in symbolism, his dichotomous elemental pairings, and his ability to underscore the primal drives that frame the exercise of political power.

That is why both artists reveal not just a state of being but two overlapping states that speak to the political ontology of our times and the epistemological ontology of our universe. And for that, both are to be loudly applauded for having given us new ways to reflect on being-in-the-world by using the greatest possible means of expression in service of the perfect marriage of form and content.

He Gong and Mark Pomilio: A State of Being