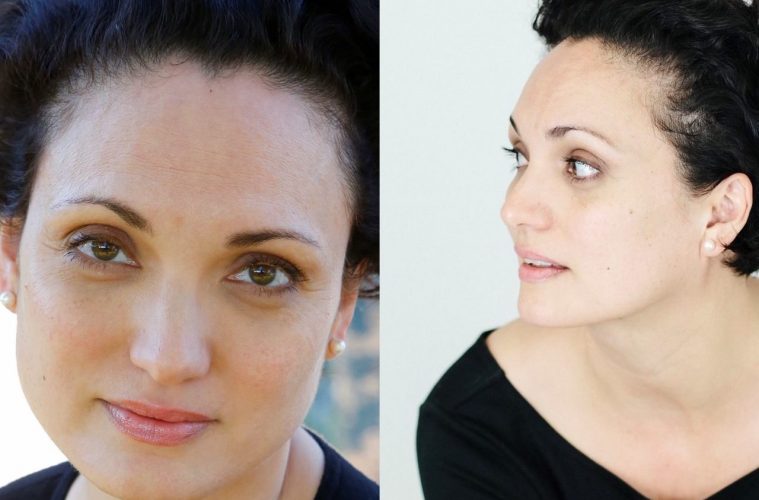 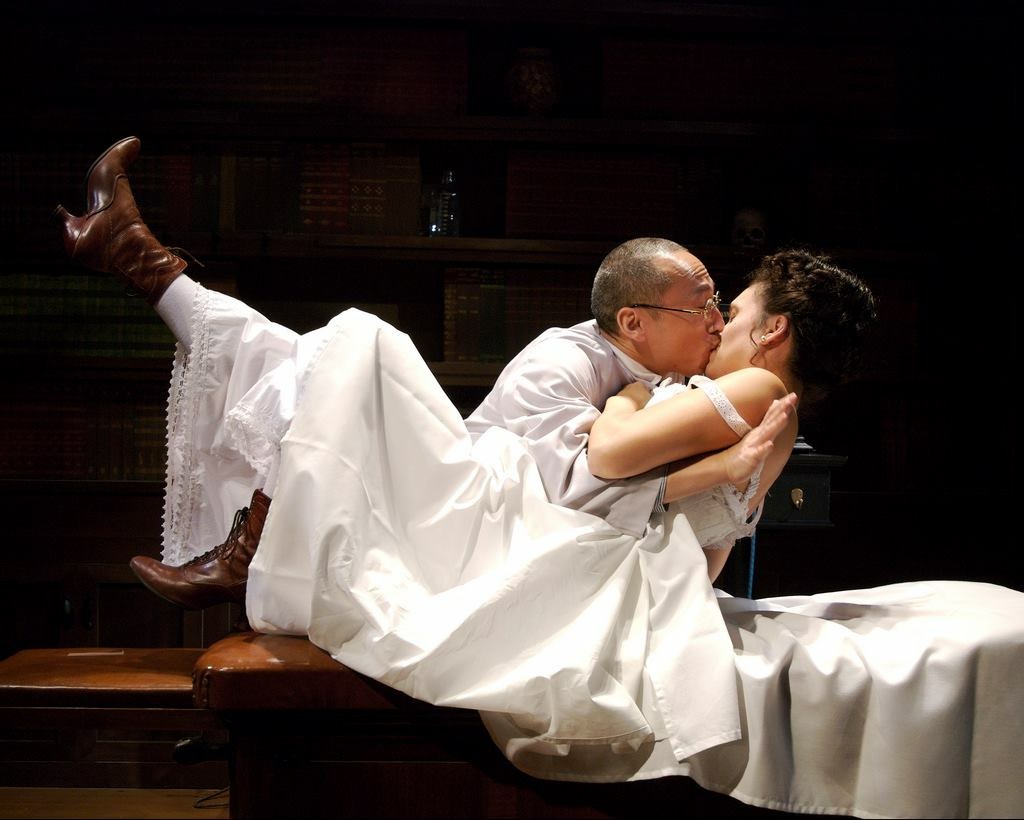 Why is storytelling important? What impact does it have on our lives? And why can’t Angelica Howland seem to escape its allure? The conversation begins at a small table in Phoenix, nestled away from the traffic along Central and McDowell. Shut off from the world, as most writers sometimes self-impose, we delve into a rich conversation around storytelling and Angelica’s work. “There have been times in my life when I have felt really low,” shares the writer, “and a story has given me the courage to stand up and try again.”

After more than twenty years of professional activity throughout Phoenix with such companies as Childsplay, Arizona Jewish Theatre Company, The Phoenix Theatre Company, Stray Cat Theatre, Actors Theatre of Phoenix, Arizona Theatre Company, and In Mixed Company, Howland stepped away from performing to focus on playwriting. “Professionally, I was very, very lucky here.”

Howland places weight on her words, no doubt aware of how difficult it is for professional actors to find work in Phoenix. “I got to do a lot of great plays with a lot of great people.” With a successful career, why would anyone step off the stage and into the writer’s chair?

It’s clear the author has reflected on her choice to step away from acting. “I was given the gift of destruction. I lost myself. I got to a point where I didn’t know who I was, so I retreated.” 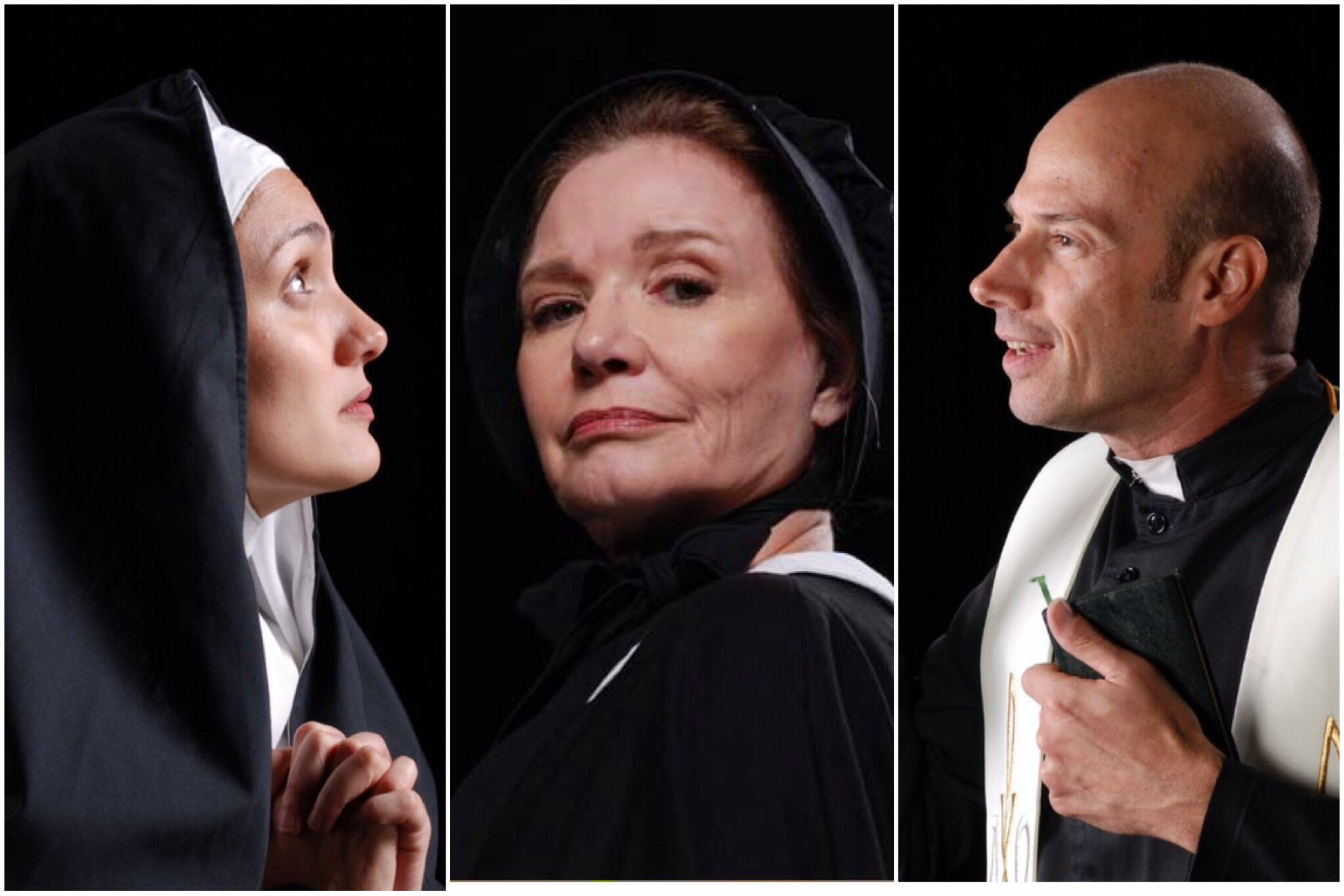 Howland may not have considered herself a writer, but she has always been writing. She describes her early playwriting as “scenes.” She also wrote poetry and short stories, and even completed a novella. “But I have no gift for the novel,” she says plainly, and then goes on to discuss how she’s adapting her thirteen-year-old novella into a screenplay. Leaving the stage may not have been the point when Angelica started writing, but it was the moment when she began to share her writing with others. The journey wasn’t without serendipity.

The Phoenix Theatre Company is known for producing one of the best 24 Hour Theatre Projects in the Valley – the process is fascinating. The night before the show, playwrights meet at the theatre and are provided with their director; they also get to meet their cast. The actors come dressed in costume, complete with props. Past characters have included a furry monster carrying a Jell-O mold brain on a serving tray, a hippie wearing a large peace sign necklace, and a spider holding a magic wand. After meeting the cast, the playwrights head home and have approximately twelve hours to write their script. The next day, the actors and directors rehearse, the cast memorizes their lines, and the show starts that evening. It is always a night to remember.

One year, they were short a writer for the festival. “My friends asked me if I would write because they needed someone. So, I wrote The Nothing Place.” Howland describes the fascinating fifteen-minute play. “If no one listens to your feelings, where do they go? It’s a play where three people have feelings that they have to work out. After that, the theatre wanted to know what else I had. I had Forward. They wanted to workshop it.” 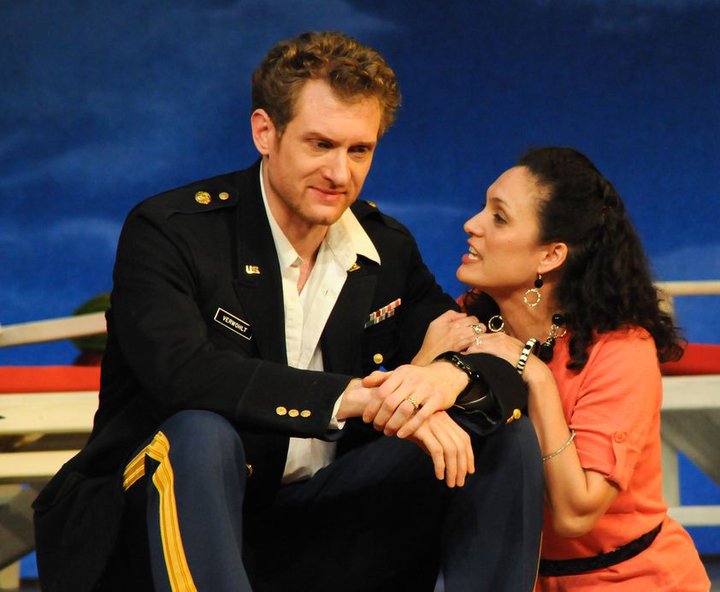 A workshop is a precious opportunity for playwrights. It’s a chance for a team of actors, a director, and a dramaturg to work as a team to explore the writer’s work. The writer makes changes to the script throughout the process. Forwardwas workshopped in 2015. Though Howland recounted the experience as one filled with terror and excitement, the process must have gone well because the play was invited back for a subsequent workshop.

“AfterForward, I wrote The Relief Society,” shares Howland. “I wrote it after that gift of destruction. The Relief Society was really digging into my current belief system and how I got there.” The play has received readings and workshops at the Phoenix Theatre Company and is approaching the end of its development.

Howland was then asked to adapt a few Shakespeare pieces for BLK BOX PHX. While working on this project, she was inspired to write a play set in a haunted house. “I feel like there isn’t a lot of theatre that uses stagecraft to present horror. It’s a wonderful challenge,” she says with wide, curious eyes. “I think that multimedia has its place, but there are other ways of accomplishing things with silence, stillness, and great storytelling.”

Lottery House tells the story of a group of strangers who compete for a three-million-dollar prize. The strangers stay in a supposedly haunted farmhouse for three nights. The last one standing wins all the cash. Sounds easy, right? 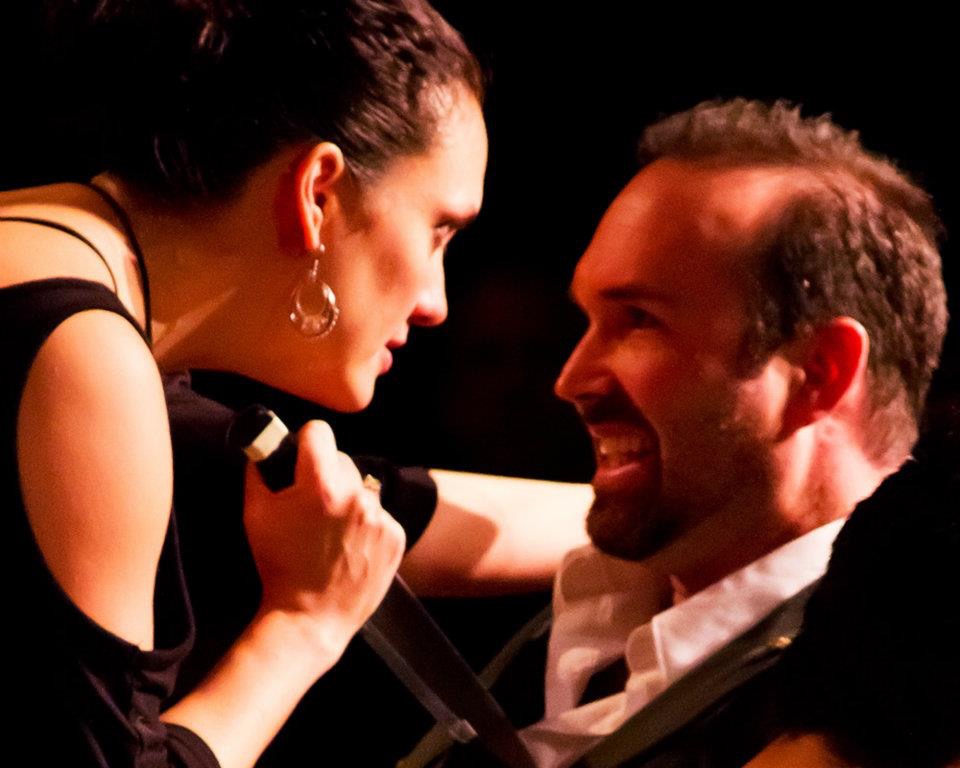 Lottery House was inspired by Howland’s passion for the genre. “I love a good scary story.” Angelica admits that she isn’t quite sure how the horror will play out on the stage, sharing that there’s a fine line between scary and cheesy. The play was directly inspired by the 1970s film adaptation of Shirley Jackson’s The Haunting of Hill House, and it was also inspired by one of Angelica’s favorite authors. “I love Stephen King. He’s not afraid to go there. He wrote Pet Sematary in his brain – about what it would be like to lose his child. It’s terrifying.”

Howland goes on to share about her interest in exploring how we experience fear in our bodies. She’s not curling a smile, and she doesn’t want to conduct some bizarre experiment, but she passionately questions: “As human beings, how much more in our bodies can we get than when feeling fear?”

Lottery House will be presented as a reading directed by Louis Farber at Now & Then Creative Company in Phoenix on Friday, November 15, at 7:30 p.m. and on Saturday, November 16, at 11:00 a.m. For information and tickets, please visit www.nowandthencc.com.

Angelica shares that she wants to use the reading to make sure that there aren’t any holes in the story, that the characters are believable, and that the play has a great ending. “I did a private reading of the play in June, and the ending wasn’t so great.” The challenge doesn’t shake her one bit: “So, I wrote two alternate endings. I want to see which ending works. We could even do one ending Friday night and the other ending on Saturday to see what people think.”

As we prepare to end our conversation and return to the noise of the city, Angelica describes an exciting play that she co-authored with Michelle Gardner, a professional actor from Phoenix who relocated to LA. Their piece – You, Me & Adam Levine –was presented last June at the Last Frontier Theatre Conference (LFTC) in Valdez, Alaska.

Now going into its twenty-seventh year, LFTC was started by playwright Edward Albee (Who’s Afraid of Virginia Woolf?) and continues to bring playwrights, actors, and theatre artists together from around the world to develop new plays through their Play Lab.

Howland and Gardner, longtime friends, decided to write the play together. “Michelle and I are the same age, and aging is really hard, especially when you have spent most of your adult life in an industry where looks and youth are really important. We decided we wanted to write something really wacky about that. Something really out of control. And we did.”

You, Me & Adam Levine tells the story of George and Juna, who meet in the waiting room of their therapist’s office. The two decide to take their middle age into their own hands. The action of the play begins with George and Juna arguing about who gets to read a magazine with Adam Levine on the cover. The argument erupts into a physical altercation, and things rapidly escalate. 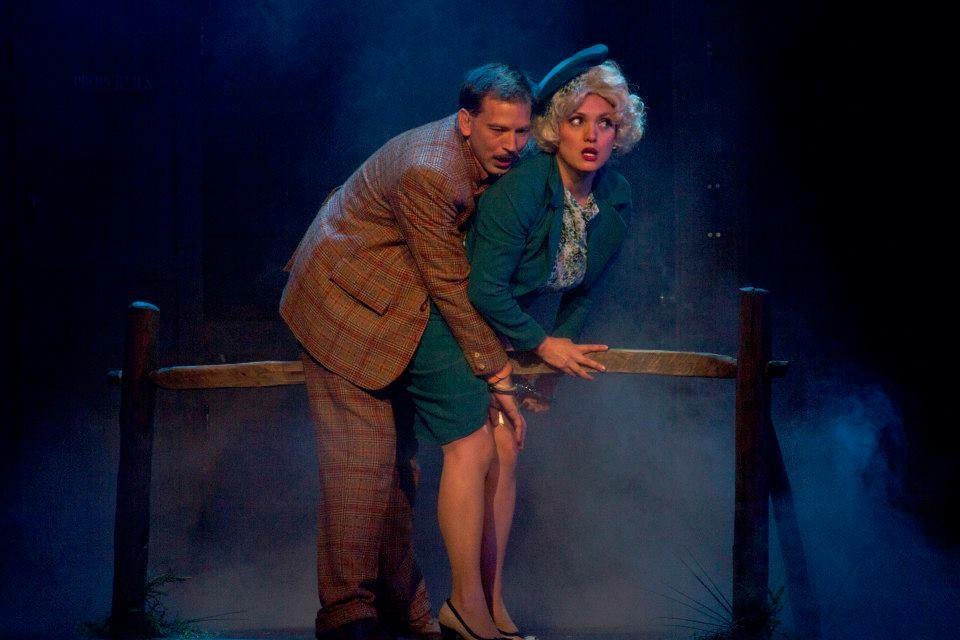 When asked who inspires her, Howland provides an endless list of friends, family, and colleagues. The standout is her son. “Harrison really inspires me. He inspires me to be a good person all the way around. And to do my best work. I would never want him to say, ‘My mom half-assed that.’” Angelica is also inspired by her husband, Brian. “He’s always supported my creative endeavors. He is my ultimate patron. I would not have been a successful actress, and I would not have the freedom to write, if not for him.”

As the conversation ends, Angelica recalls the poet Wanjiku Wanjiru, whose book Under the Mango Tree has been on her nightstand for the past four months. She reads a poem and lingers on its final line: “start in doubt, start in fear, simply start.”