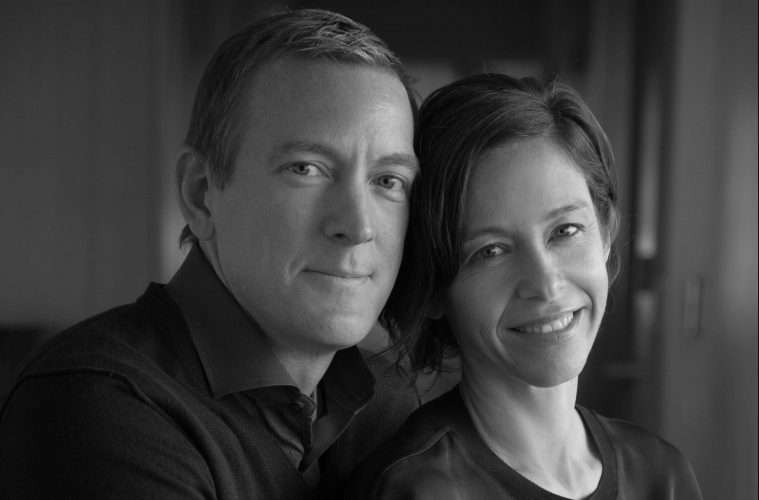 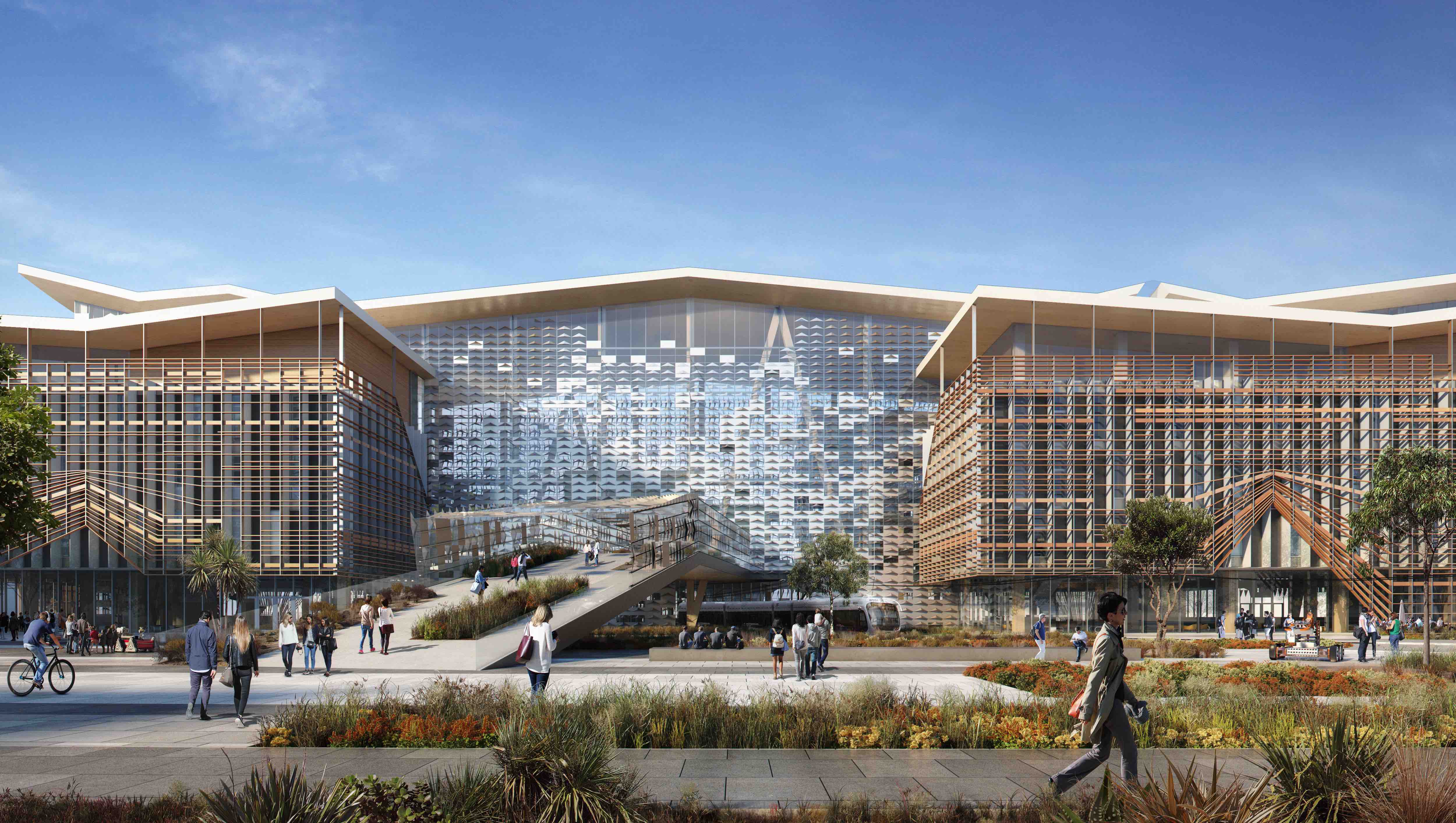 When Christopher Alt and Christiana Moss talk about building a future together, their vision is somewhat grander than your standard white picket fence. Two of the founders of the Phoenix-based, award-winning architecture and environmental design firm Studio Ma, the couple’s portfolio ranges from gigantic research facilities to museums, apartment buildings, single-family homes and even statues. What unifies all their projects – including their marriage – is a belief in the power of architecture to change the way people think about and interact with their surroundings. Driven by client missions – whether it’s a museum telling the story of the West or a builder creating a model for sustainable urban development – their brand of restorative architecture helps people live better.

Alt and Moss share two passions: design and cooking. When they’re not together whipping up meals with their 13-year-old daughter at their home (which is net-zero, meaning it produces as much energy as it consumes), they’re collaborating with builders and clients on some of the most forward-thinking construction projects in the Valley and beyond. This spirit of collaboration defines both their personal and professional lives, as it has since they first met at Cornell University College of Architecture in the early ’90s.

“It’s fair to say that architecture brought us together,” Alt admitted early in our interview. 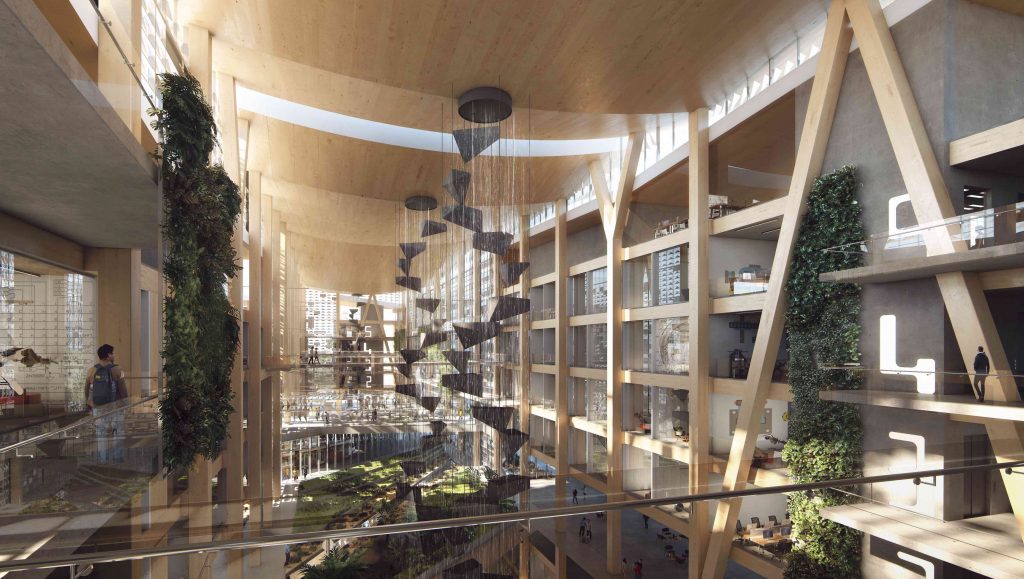 In school, they saw a lot of each other. Together, they grew impatient with the overly theoretical approach to architecture popular at the time. When Norwegian architect Sverre Fehn visited campus, his focus on place-based architecture and discussion of the ideas of his countryman Christian Norberg-Schulz struck a chord with the budding couple. Together, they decided to follow Fehn north and across the sea to study at the Oslo School of Architecture and Design in Norway.

“It was an exciting time in Oslo,” Moss recalled. “It wasn’t about a series of abstractions or applying these big, heroic ideas to a building or to a concept. It was really about thinking about yourself within the space and doing that on a pretty deep level.”

Nestled beside the Oslofjord, Norway’s capital then hosted a slew of startups and established architectural firms experimenting with new approaches, materials and values – many that have since become mainstream, such as an emphasis on sustainability. One of these firms, Snøhetta, had just beat out 1,400 other entrants from around the world to design the Bibliotheca Alexandrina, a major library and cultural center in Egypt built on the site of the famous Library of Alexandria of antiquity. 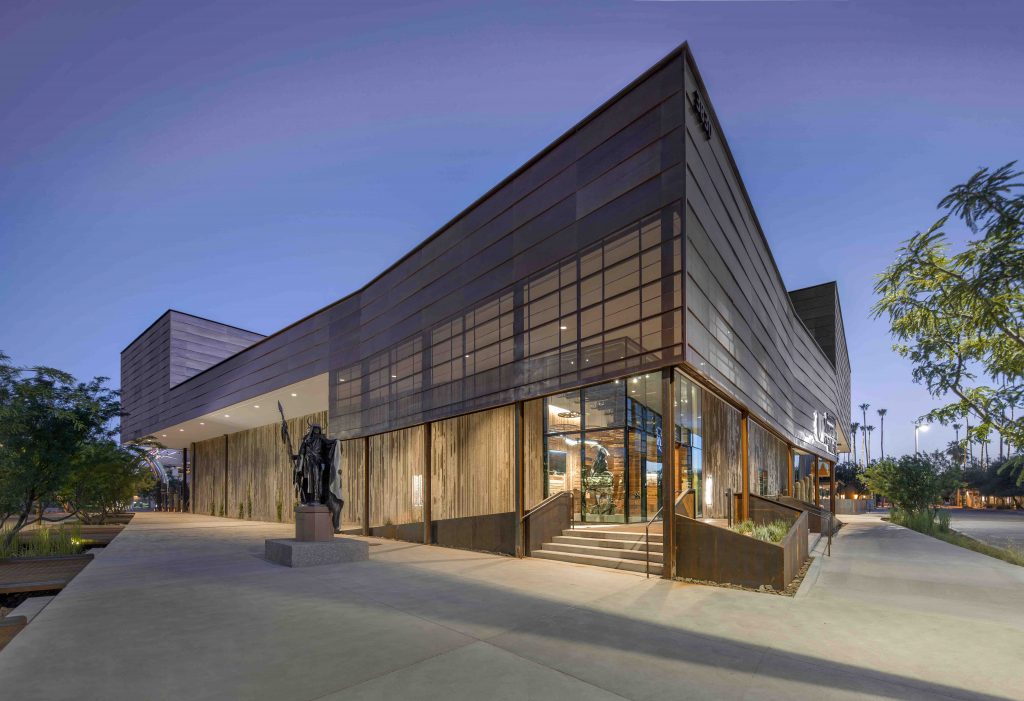 However exhilarating the intellectual and professional environment was, the climatic and cultural differences proved a little shocking at first. “We got there in January, so it was very dark. People seemed to hibernate in the winter,” Moss said. “Most of the students actually left work pretty early. They all had lives outside of work, which was unusual for us. We were the ones who stuck around the studio until really late at night. We would talk to each other about the work. I think that’s where we really began to collaborate.”

The two were passionate about architecture and each other. While there, their relationship progressed. They discussed how to navigate the inevitable issues that would occur around being both a couple and business partners. “It really was rooted in the idea of equality and that each can contribute unique skills or tendencies in the relationship, but that we share responsibilities across the board,” Alt said. 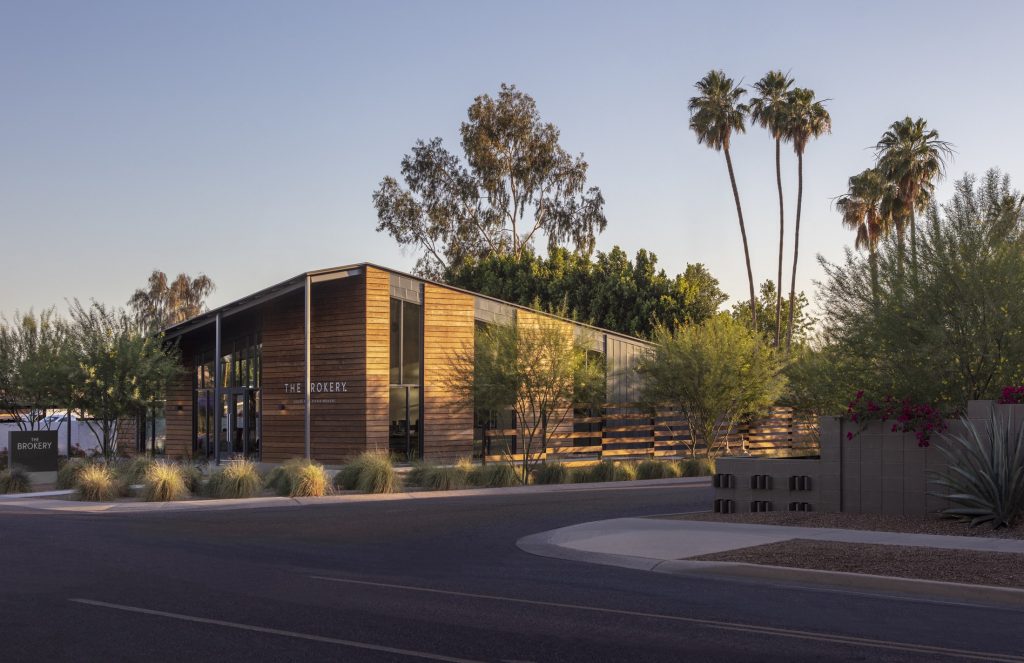 Though the pair considered staying in Europe as expats, they ended up returning to the U.S., graduating from Cornell and then interning in New York City with German-born architect Simon Ungers. While there, they worked on a number of exciting projects, including a winning design for a Berlin Holocaust memorial. However, soon Arizona beckoned.

“I was just taken by the desert, the beauty and intensity of it – its way of forcing you to be very aware of your surroundings,” Alt recalled of his impressions from his first visit to the state. “You become more aware of light and of the landscape, of the plant and animal life. It really just heightened all of my sensibilities.”

There was more than just the stark aesthetics of the desert that drew the ambitious young couple. Phoenix’s unique architectural history, the fact that it is home to the experimental schools of Frank Lloyd Wright and Paolo Soleri, and ASU’s strong architectural program were also incentives. However, there was another important factor. Back east, the couple would have to fit their imaginations into already established contexts. This young desert metropolis offered the pair an opportunity to make their mark in a big way. 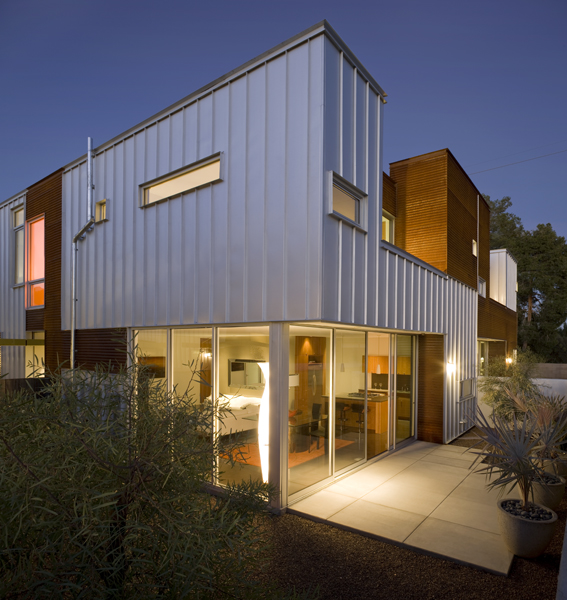 The couple moved to Phoenix and set up shop downtown after winning a competition about possible uses for the city’s canals. They saw the watery thoroughfares as an opportunity to create a unique aesthetic within the endless tracts of ranch houses and strip malls. They had a different story to tell about desert cities. Rather than imposing an alien landscape at great material cost, they would reflect the natural environment while reducing resource consumption.

Together with architect Dan Hoffman, they formed Studio Ma in 2003. Mais a Japanese word and concept that roughly translates to space or negative space. Rather than conceiving of space as an absence of matter, maspeaks to it as something positive that integrates disparate elements.

“When you make things, you’ve immediately created a relationship to other things,” Alt explains. “That kind of dynamic, thinking about space as a positive element (despite being called negative space), is really what you’re creating; you’re defining space. Magot to the essence of that, and we were excited that there was a term to represent us.”

Here Moss chimed in, noting the Japanese penchant for laconic efficiency in capturing such an expansive concept with a mere two letters. For Moss and Alt, not only does the term communicate an essential aesthetic value, it also embodies their deep commitment to designing buildings that are more than standalone structures. They want to create dwellings truly integrated with the surrounding human and natural environments. For them, every project is a way to tell a story and iterate a vision for the future. 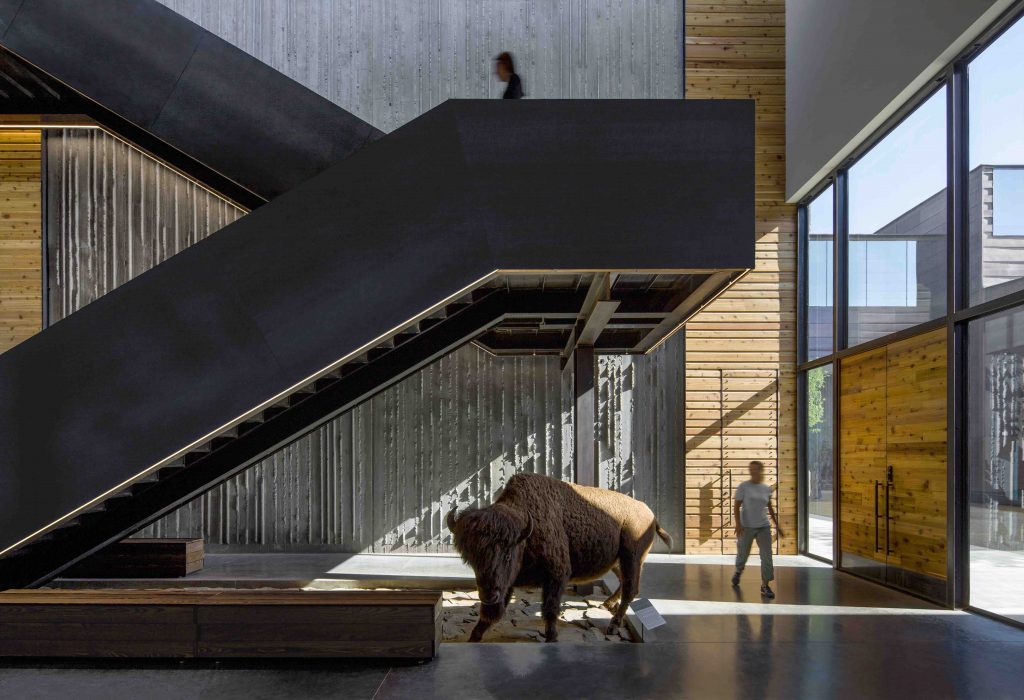 Case in point is their design for Western Spirit: Scottsdale’s Museum of the West. The 43,000-square-foot facility, located in the heart of Old Town Scottsdale, instantly became one of the city’s landmarks, exemplifying many of the beliefs and ideas of Moss and Alt. Certified with an LEED Gold rating, the building blends form and function seamlessly. It features a number of bioswales, landscape features meant to remove pollution and debris from runoff, something critical for large developments embedded in mostly impermeable desert soil. The enclosed central courtyard houses a sculpture garden and a “weeping wall” that collects rainwater and HVAC condensate, which is put to use on site, conserving the desert’s most precious resource: water.

The building also introduces lots of natural light, which translates to energy savings. “The idea that you’d have this sky space in the center that really organized the museum was, I would say, the main idea,” Moss explained. “The galleries move around that courtyard. You’re always moving and circulating in reference to that sky space and negative space in the center.” 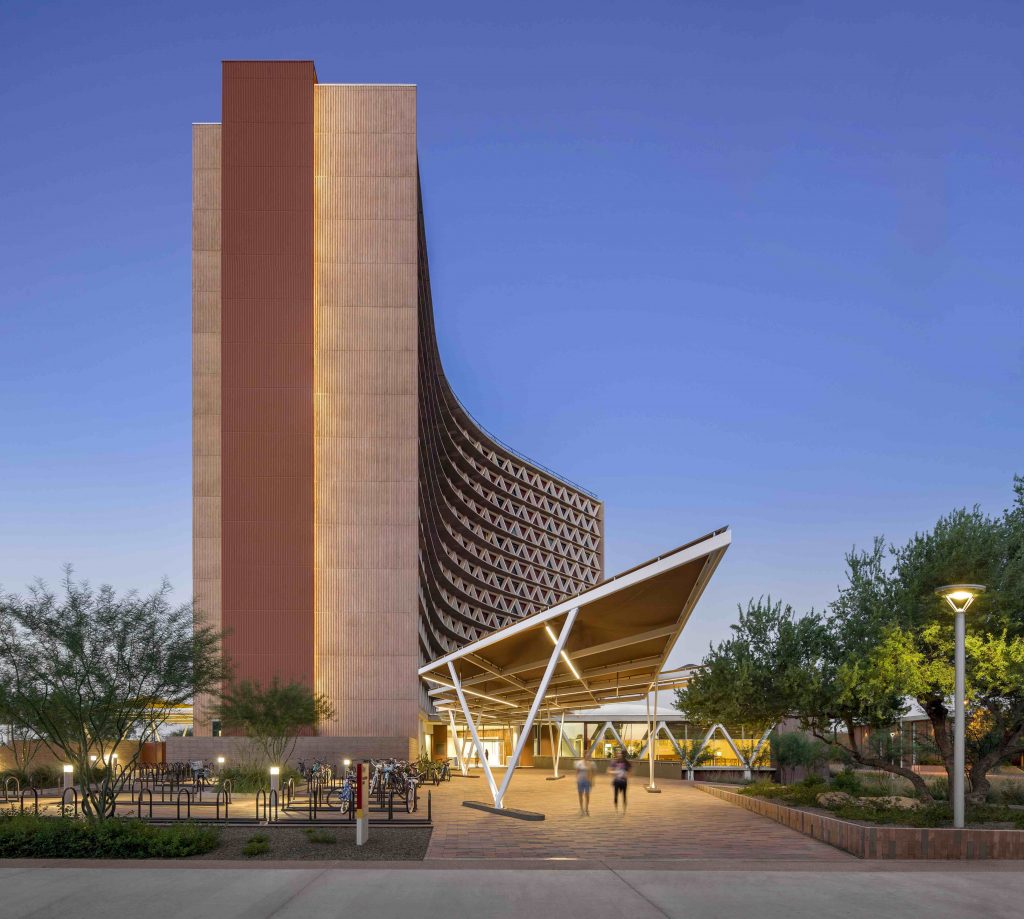 They drew inspiration from icons of the West such as horseshoes, woven baskets and red cliffs. Learning from desert organisms, the structure mimics their strategies for coping with extreme heat. The concrete exterior is ribbed, which generates passive vertical shade, the same way the corrugated shape of a saguaro cactus does. Suspended above the museum is a woven metal structure that shades the building without absorbing too much heat itself. During the construction, three-quarters of the non-hazardous debris was recycled. The museum’s theater has outstanding acoustics due to sound attenuation blankets made with locally sourced cotton.

“The founding couple of this architectural firm, with keen listening and other communication skills, got it from the get-go,” said Mike Fox, the museum’s CEO. “The facility’s design, choice of materials, color, shapes and building techniques evoke respect for the culture and geography of the greater American West.”

As Michael Crow, Arizona State University’s president, sought to reconceive the landscape of public higher education in the 21st century through his vision for a “New American University,” Studio Ma translated his vision through several major construction projects. They redesigned the Memorial Union after a fire and helped direct the construction, completing it in only a few short months. Despite the rushed timetable, the design won a Kimper Goodwin award. 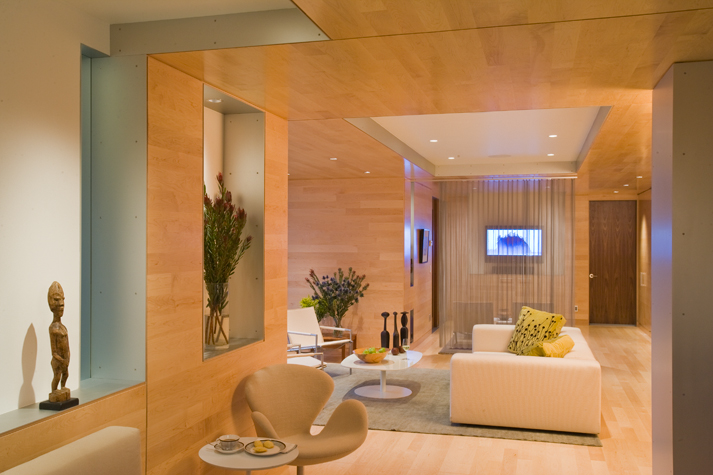 Another exciting project at ASU was Studio Ma’s proposal to turn an Interdisciplinary Science and Technology building into a net-zero facility featuring on-site farming, while incorporating a cutting-edge carbon capture system that turns air pollution into fertilizer. “I think it’s actually shaped our vision of the future and the idea that architecture can be restorative in terms of all of the issues we’re facing with our climate,” Moss said. “Architecture and the built environment are really key parts of getting us out of this problem.”

While the Museum of the West and the redesign of ASU’s central building offer the chance to tell vast sagas, other projects allow Alt and Moss to explore smaller, but no less important, stories. One example is an urban infill development of 12 condominium homes in downtown Phoenix, called PRD 845. Though it may sound like the name of a droid from the Star Warsfranchise, the design was anything but clunky. In fact, it won an American Institute of Architects Merit Award in 2008.

With rooftops of varied heights – mimicking the form of surrounding mountain ranges – each unit features a deck with views, something Alt and Moss feel is essential to fully appreciating the surrounding desert. The affordable, highly energy-efficient and dense design is a model for downtown Phoenix, an area struggling to balance the competing demands of increasing density and reducing environmental impact while minimizing the displacement of existing communities.

“Our responsibility is to think, first and foremost, that whatever we build should give something back,” Moss explained. “I think architecture has an ability to affect the way people experience their everyday lives. We also see a huge potential to help communities and people get better connected to place. When people experience it for the first time, it’s a big aha moment that we enjoy bringing to them.”

For Alt and Moss, buildings aren’t just buildings, in the same way their relationship isn’t just personal or professional. Recognizing the many functions of dwellings is a way to change harmful consumption patterns while also connecting people. For them, collaborating on design or dinner is always a labor of love.