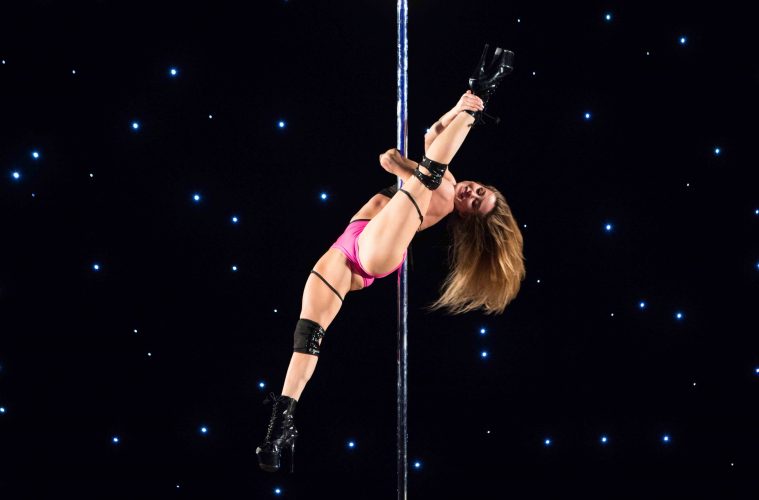 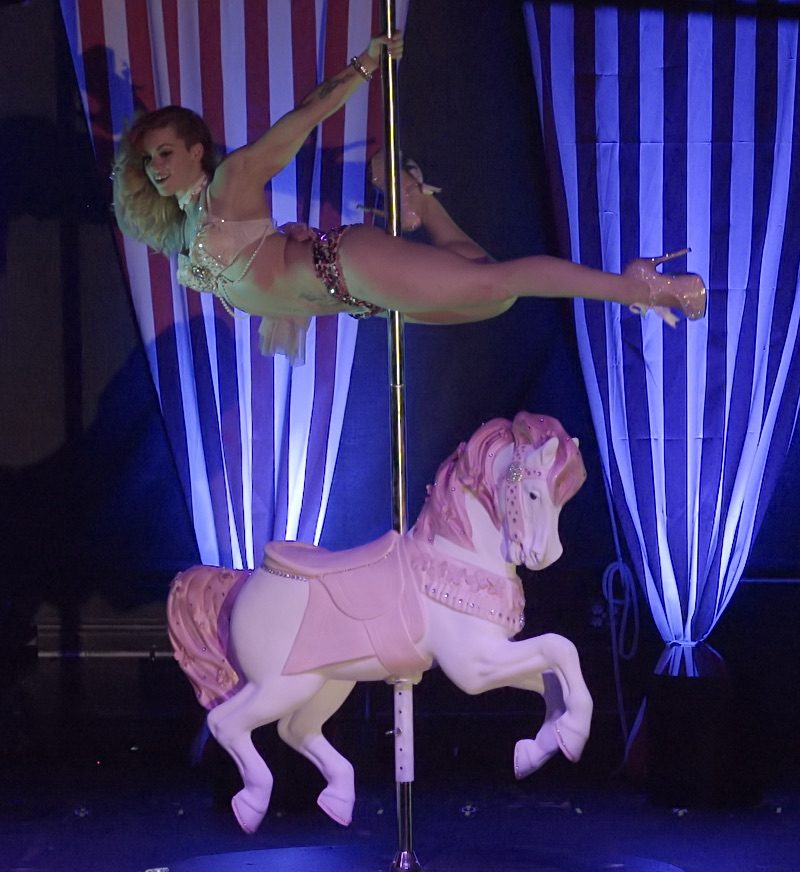 Lindsay Green, the owner and founder of Prowess Pole Fitness and Aerial Intensity, grew up in the small town of Goodrich, Michigan, a stone’s throw from Flint, a city famous for its toxic waters and precipitous economic decline.

Living in the post-industrial landscape of America’s rotted-out rustbelt, Green dreamed of sunnier climes and swaying palm trees. During Christmastime, when it was below freezing at home, a young Green would visit her mother’s family in Arizona. She loved it. When inevitably it was time to return to Michigan, she would protest and ask why they had to leave. Though it took a few years to come to fruition, it was then that she decided: Someday she would move to the desert for good.

Green was 19 and living in Flint when a friend showed her some pole-dancing moves. It proved fateful. “She was this amazing, bendy and crazy-strong creature,” Green recalled. “I basically begged her to teach me.”

Though just 5′4″, Green’s energy and drive, in addition to her chiseled musculature, lend her a towering air. As we chatted amid gleaming poles and moving bodies on a Saturday at her Tempe studio, I felt incredulous when she claimed that, growing up, she was the least athletic person one could imagine.

Though now Green can easily do the splits upside down while spinning on a pole in front of a rapt crowd, this wasn’t always the case. “I actually failed gym in high school,” Green admits with a sheepish grin. “That’s how un-athletic I was. I couldn’t run a mile.”

Green never did dance or gymnastics growing up. Aside from T-ball, she didn’t participate in organized sports. However, while watching her friend’s dancing contortions that day, something clicked, and she made a promise to herself: She would learn and master the art of pole dancing.

“I never considered myself to be strong, but just the idea that I could get myself upside down was really exciting. It was something fun I could do at my house,” Green said. “Going to the gym is not always an enjoyable exercise, especially for women. You’re constantly being looked at. Now, I don’t care. Part of pole dancing is building self-confidence.”

Some see in pole dancing echoes of the tradition of the Maypole, which was used during spring rituals in Europe’s pre-Christian past. Though customs vary, the festivals often saw troops of women dancing around the pole, while sometimes winding ribbons in complex patterns. 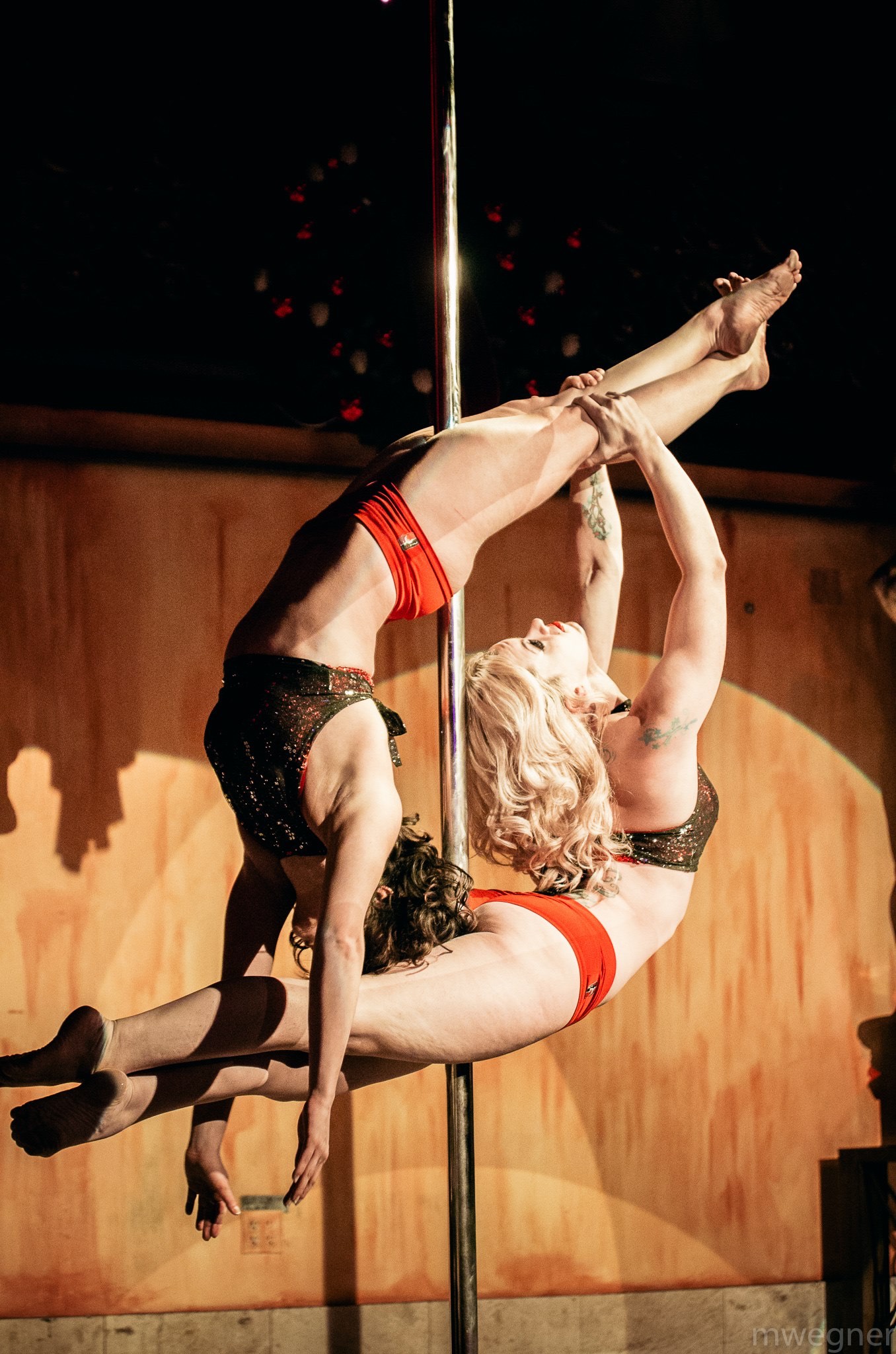 In India, a sport called mallakhamba, which translates roughly into pole wrestling, has been practiced since at least the 12th century. In mallakhamba, athletes execute aerial yoga postures and wrestling grips on a wooden pole, often involving death-defying displays of strength, flexibility and control.

In China, pole dancing has traditionally involved the use of two vertical poles that stand between 10 and 30 feet tall. With the poles covered in rubber and the performers wearing costumes over most of their bodies, the motions were less fluid. Several modern pole-dancing tricks can trace their lineage to the Chinese tradition.

In Femininity, Feminism and Recreational Pole Dancing, author Kerry Griffiths traces the development of the sport’s association with burlesque and striptease to the “hoochie coochie” dancers of the late 1800s and early 1900s. These dances often occurred at circuses or traveling fairs, where performers may have gradually integrated the tent support poles into the act.

The pole became a mainstay of gentlemen’s clubs in North America starting in the ’60s. In the ’90s and ’00s, the pole fitness movement began and grew into a popular group activity like yoga or Pilates.

This wasn’t the case when Green was first learning in Michigan. After her introduction, she bought a pole that she could set up in her kitchen. Fairly quickly, her practice outpaced her teacher’s ability. Eager but without proper instruction, Green soon injured herself while practicing inversions.

“The injuries I sustained are actually very common for self-trained pole dancers, because most studios will correct the bad technique as soon as they see it,” Green said. “If you’re not strong enough to do an inversion, you end up throwing yourself up into it, which is just not a good idea.” Green explains that because of the momentum, weight and improper technique, the lats become vulnerable. “I ended up pulling both of my lats, one of them more severely, because I favored one side. It took several months before I could even lift my arms after that.” 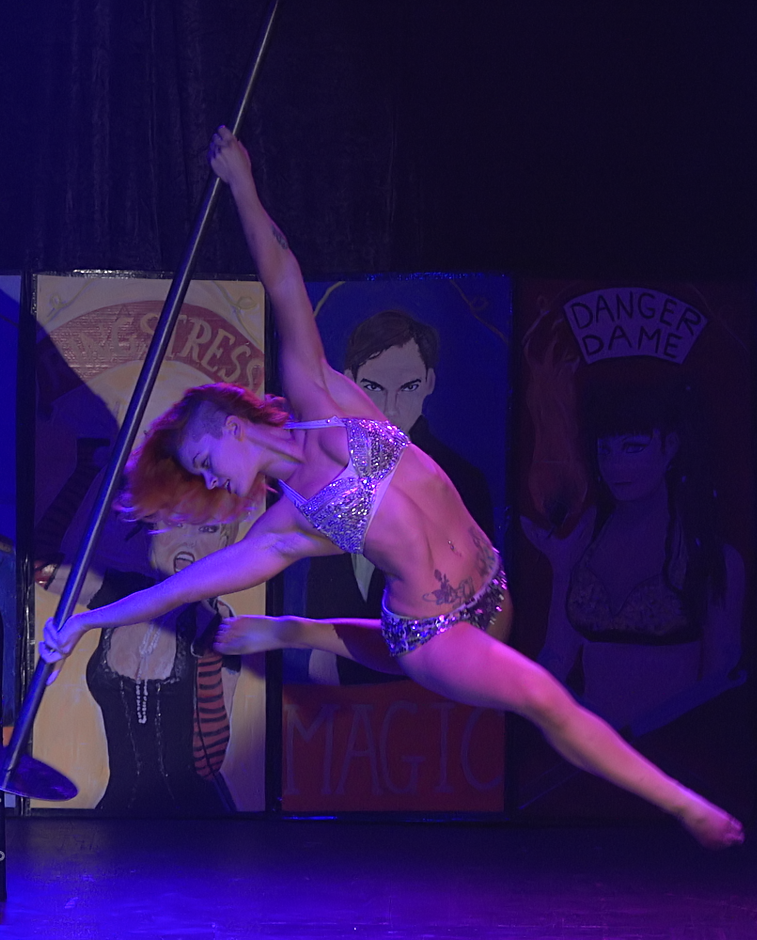 Undeterred, once healed Green bought some VHS tapes of exotic dance competitions (YouTube wasn’t a thing yet) and reverse-engineered the techniques. As she learned more and grew stronger, friends would ask her to teach them. She showed them some basic moves while being careful that they didn’t injure themselves. This attention to safety and proper form, gleaned from painful personal experience, is something Green has integrated into her teaching and performing today.

Green finally made the move to Arizona in 2005. She got a job at a salon and worked part time for a real estate agent. She made friends with other dancers and soon enough was teaching and practicing with them. Over time, her strength, experience and confidence grew to the point where she wanted to teach professionally. When she mentioned her hobby to the real estate agent she worked with, they decided to open a studio.

Though Green was able to develop a group of regular students, her first studio wasn’t profitable enough for her partner’s liking. “After he decided he wasn’t going to continue, I decided I wasn’t going to be stopped,” Green said. “I reached out to every studio in Phoenix. At that point, there were only a few and they hadn’t been opened for very long.”

Green started teaching at studios in Tempe and Peoria. She became interested in the growing world of regional and national pole-dancing competitions and participated in her first competition in 2009. Though she didn’t place, Green learned a lot and made valuable contacts. “Meeting all these other pole dancers was insane because I had only known like five before,” Green said. “It was like discovering this whole world of people who were doing the same thing as me.” 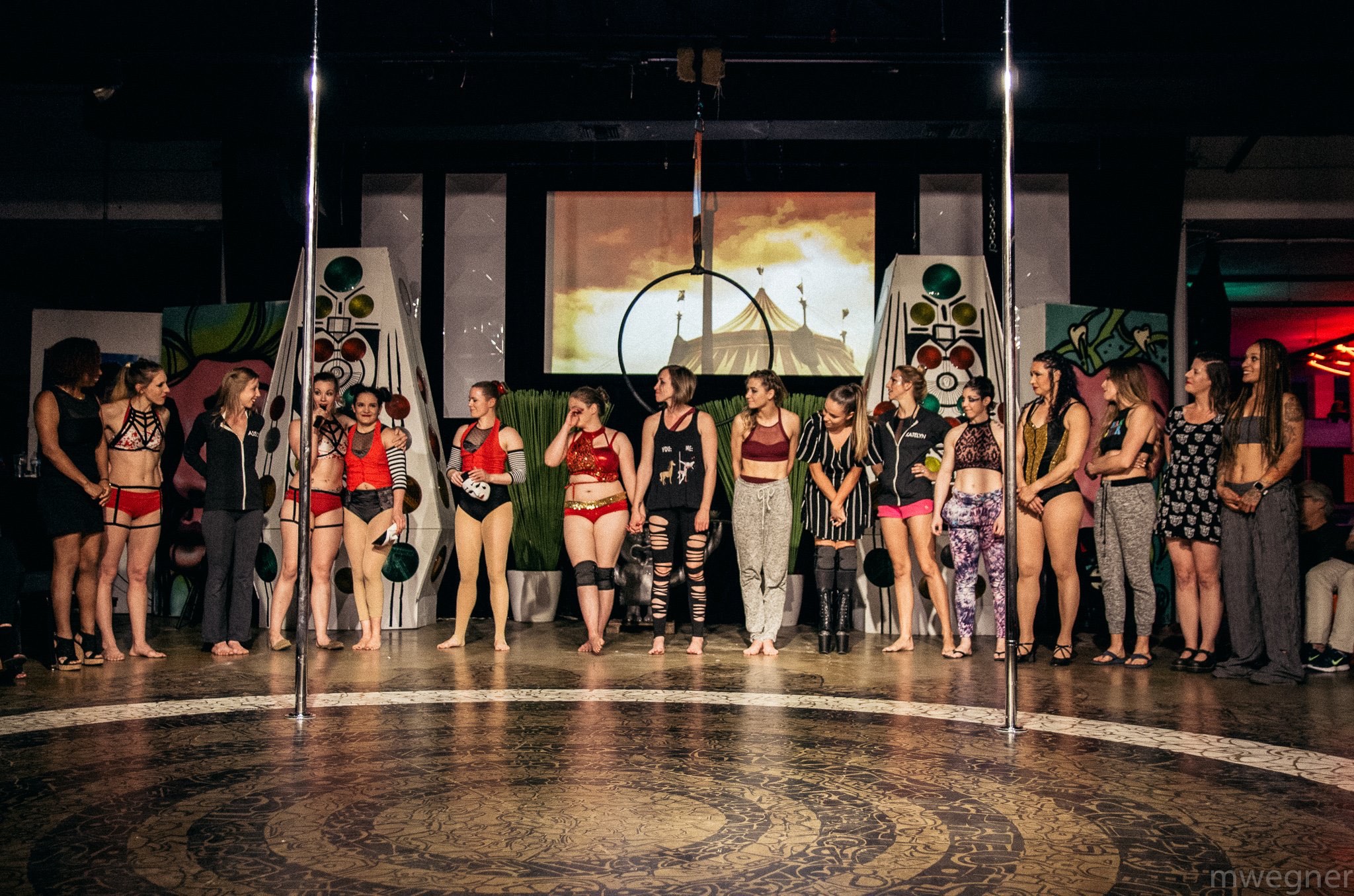 Upon her return, Green contacted a number of performance groups and resolved to do as much as she could to advance her skills as quickly as possible. One group she continues to work with is Romantasy Cabaret, run by Mizz Lucy Morals, which features a wide range of vaudeville acts including burlesque dancing, comedy, sideshow, fire dancing and, of course, aerial dancing using a range of devices. Green performs regularly with Romantasy under the name Ember Soleil.

“We’ve been compared to a local version of Cirque de Soleil,” Morals said. “There have been people that have come across our stages that have had a bit of a diva mentality,” she added. “One of my favorite things about Lindsay is, regardless of how talented, incredibly fit and beautiful she is to look at, she’s super humble.”

While building her career, Green performed at diverse venues across the Valley, everywhere from museums and large theaters to bars and on rooftops. “This was the hardest time in my life,” Green said. “Every Saturday was an 18-hour day. I would do hair until noon and then teach from noon to five or six in the evening. I might do two or three bachelorette parties, which is like pole dance for beginners. After that, I would grab my equipment and head to whatever gig I was doing and be there until one or two in the morning.” 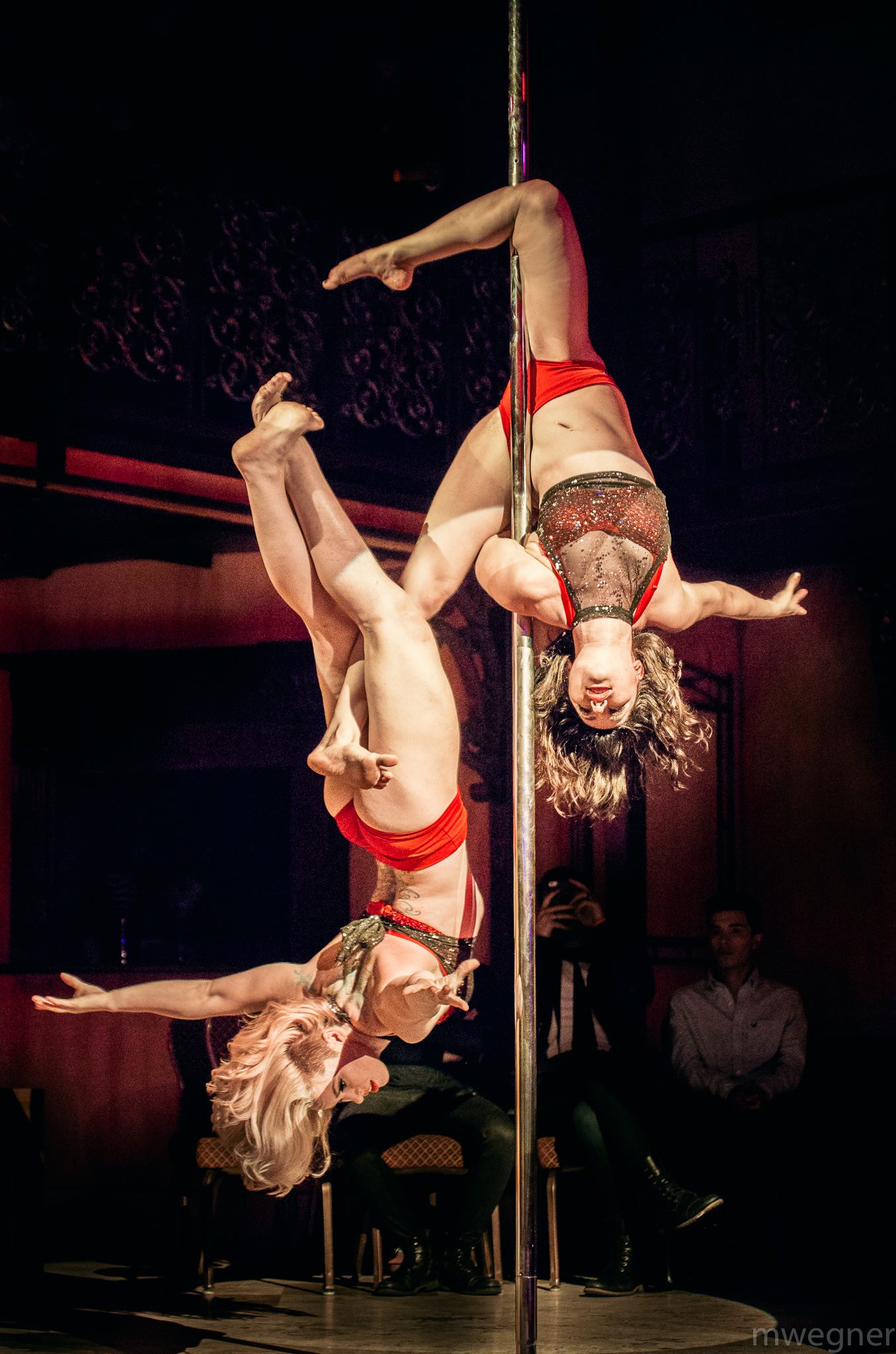 Tired of commuting all over town and confident in her loyal following, Green once again opened a studio with a partner, this time a fellow pole dancer. Starting in a humble 800-square-foot space with 8-foot ceilings, Prowess Pole Fitness grew, until her partner decided to step back. Green then upgraded to Prowess’s current larger home in Tempe, with 15-foot ceilings, allowing sufficient clearance for lyra aerial hoop and silks classes.

Prowess fielded a team of 12 at the 2018 Pole Sport Organization Pacific Pole Championships in April. Green was the silver medalist in the professional category and gold medalist in the doubles category with Samantha Ingram.

In addition, Green runs Aerial Intensity, a company that connects her and other pole dancers and aerialists with performance gigs at local venues and private events. Green has integrated a number of creative elements into her performances, such as an actual carousel horse (named Sid) that has been modified to fit onto a pole, as well as a range of custom metal apparatuses, including spheres, cubes and a crescent moon that can hold a large number of aerialists, allowing for some truly astounding performances.

One Prowess instructor and Aerial Intensity performer is Carolyn Elizabeth, who also competed for Prowess in the championships in April. “I got started with Prowess because I wanted to go to a studio that had more of a theatrical perspective to it, in that everybody gets to perform and everybody gets to express themselves,” recalled Elizabeth, who competed and taught pole dancing before joining Prowess. “Prowess is known for that, all through Phoenix.”

“I also really like the fact that Prowess has a community where everybody supports each other and lifts each other up. Everyone is teaching everyone tricks. Lindsay has done a really good job of bringing us all together. I feel like I’m a part of something that’s really fun and positive.”

Green continues her efforts not only to teach people how to execute dazzling aerial maneuvers safely but also to help them build confidence. “The driving force in the entertainment community that Lindsay and I are trying to foster is that it’s empowering,” Morals explained. “Above anything else, what we are teaching these women (and men) is this incredible sense of self-confidence.”

Romantasy Cabaret launches its season on August 25 with Cirque Nocturne at Club Red.

Plan ahead for the Halloween season with “ScAerialists and Pole-tergeists,” October 14 at Unexpected Gallery, a Prowess Pole Fitness and Aerial Intensity event.