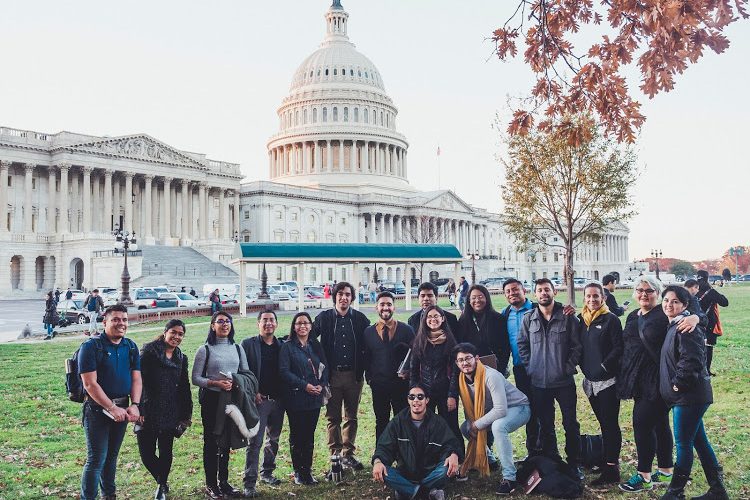 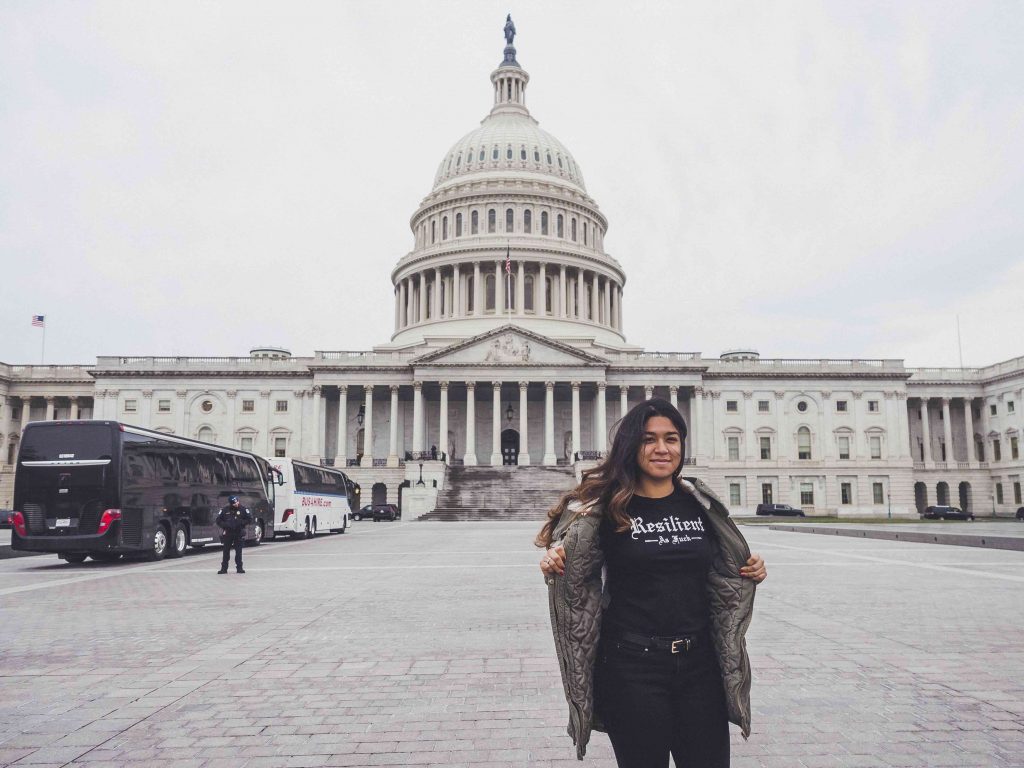 Our President ran a campaign that targeted – among others – those deemed illegal, foreign and alien. He largely won due to his staunch stance on “othering” people. In light of this, it’s crucial to highlight those who live in the shadows as a way to play with the light. Arizona is home to several thousand seeking asylum through the Dream Act. Instead of aliens or foreigners, we call them Dreamers.

The three people interviewed here are ordinary humans with the drive and heart to make a difference. Although they each have their own stories, they are united in a singular goal to achieve a better life. And, at the end of the day, providing asylum is part of the gospel of the American Dream. Isn’t that the pilgrim passage? Trying to make it better. Are immigrants just the new pilgrims?

You’ve walked for over five hours, but it feels like 20 when you’re five years old. Your little brother is being carried by a stranger, and your mom is moving quickly. The stars above are magnetic, huge and alarming, and you feel the moon sag into you. There is no time for a lot of questions. You have to keep moving. You dropped your stuffed animal a while back, but it’s too late to pick it up now.

Once you make it to the big city, you are separated from your mom and jammed into an apartment with several other people – how many, you’re not sure. You are five years old and without a mother in a land that doesn’t know your name and doesn’t seem to want to. Crying doesn’t feel like a safe thing to do right now, so you just let your eyes sink into the ground. You make yourself quiet.

Finally, your mom comes back. She is relieved. It’s time to start a new life, she says. You don’t know what that means, but you think it’s something special. You don’t understand her enthusiasm, but you sense that life will be different in some way. 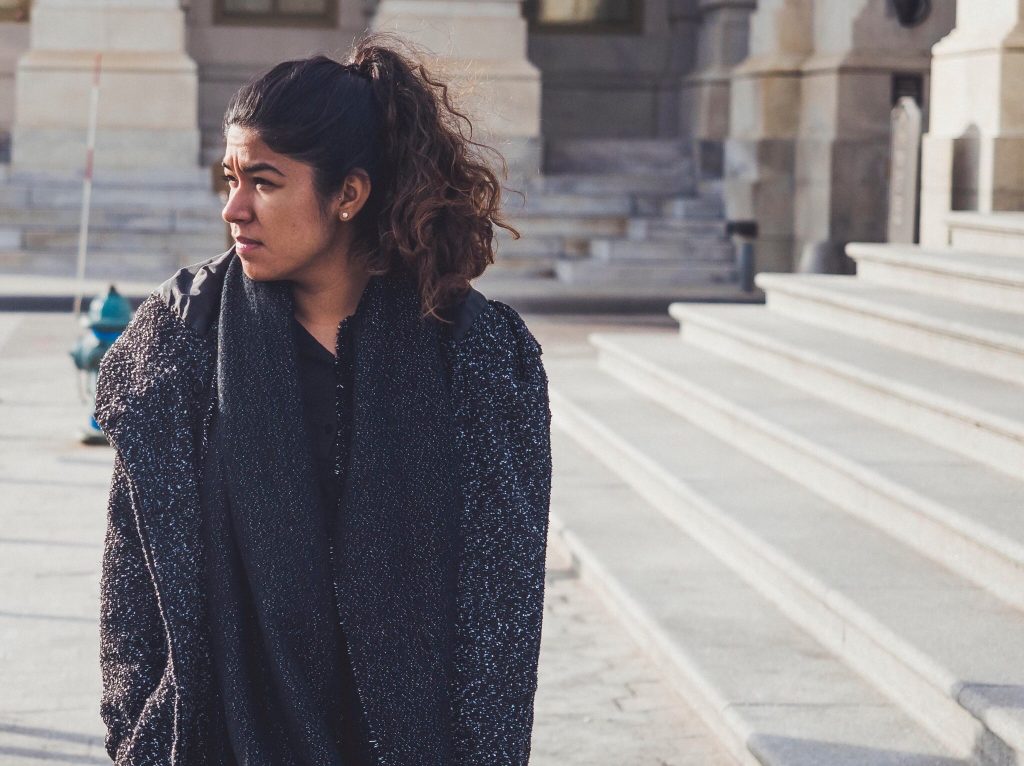 Phoenix activist Maxima Guerrero was born in Morelos, Mexico, and came across the border when she was five. She attended Kenilworth Elementary, where she had the benefit of being in a dual-language classroom. Guerrero didn’t really have to consider her legal status until high school at South Mountain. She couldn’t get her driver’s license, couldn’t get a job, couldn’t travel to Washington D.C. for a school trip. This issue was something that really made her sad. Her best friend was offering to pay for her trip and everything, but she couldn’t risk being stopped by agents at the airport. She couldn’t risk her freedom – tenuous as it was. “From then on, it became about having to say no. I had to have an explanation for why I couldn’t do things,” said Guerrero. After graduating from high school, her life just became harder.

She couldn’t get a job and couldn’t afford college because her immigration status meant she had to pay out-of-state tuition and wouldn’t qualify for institutional scholarships. For about two years, she lived in a sort of stasis, just watching television at home and bemoaning her situation. However, when she heard about private scholarships, she started going to the library and doing research. She was eventually able to obtain a scholarship, and with that money – along with the money she raised making jewelry – she enrolled in school. While at Phoenix College, she learned about a group of undocumented students at Arizona State University.

Her connecting with the group at ASU coincided with the passing of SB1070, and Guerrero’s friends would go down to the capitol to protest. At the time, she didn’t care to even know who the governor was. She was out of the lurk about the various powers that kept her in the shadows. Over time, she became more active with her friends and became involved in the protest community, where she found a home and a place.

Guerrero currently works for Aliento, an organization that helps provide community assistance for undocumented immigrants. She also has a clothing and accessories brand called Ganaz Apparel, which she works on with another undocumented immigrant. “Keeping in mind what’s at risk every day is really heavy. Part of that is seeing how we can be better as we keep up this fight. We have to keep fighting,” said Guerrero.

The first time you hear The Doors is in your parents’ car with the windows rolled down on a dusty Phoenix freeway. This opens a window into a moment, into a feeling, into a way of being. You are eight years old and new to the United States and feel suddenly at home in the brooding croons of Jim Morrison. You feel like he recognizes your humanity and understands something about you that you can’t quite put a finger on.

You love the way that music just creates a feeling. You love how music is a sort of hideaway, a kind of storage place for feelings, moods and moments. You are enthralled by the way music makes you feel at home no matter where you are. 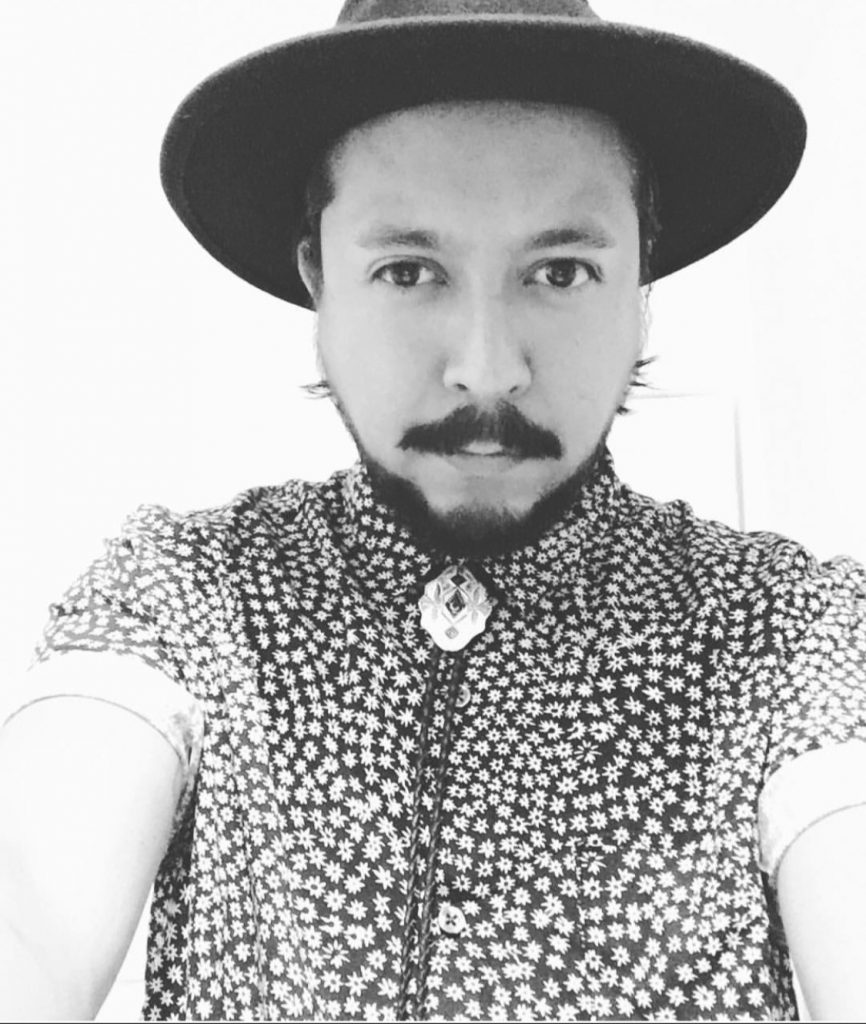 Jairo Lopez was born in Mexico and lived there until he was eight. He grew up listening to Norteño music. He moved to Phoenix and settled in the West Valley. As a kid, it seemed like an idyllic place. He remembers just riding around on bikes and hanging out with his friends. He was really happy as a kid. Once high school hit, the truth about his community was revealed. There were drive-by shootings in his neighborhood, and even school didn’t feel safe. Lopez found comfort in music and art. He played guitar throughout his childhood, painted and loved to just listen to music.

Music is something that can transport you away from your environment, away from the pain and the hurt. Music can make magic happen. Once Lopez graduated from high school, he started hanging around Grand Avenue in Phoenix. At the Red Door Gallery on Grand, he met Mike Peters, who was a local deejay and knew a lot about music.

“I would visit him at his house and hang out. He was very into music and had a bunch of instruments and a big record collection. He would let me play around with his stuff. I thought that was really nice of him. A lot of people are really particular about their gear. He was okay with me picking up his stuff and moving it around,” Lopez said.

Eventually Peters showed Lopez how to work a turntable, and he took it from there. Lopez played his first-ever set (under the moniker Boris Bon Bon) at Bikini Lounge about 12 years ago, and now he’s playing shows all over Phoenix at local spots like Crescent Ballroom and Valley Bar.

Though he’s enjoyed a lot of success, he believes it’s vital to stay humble. “The most important lesson that I learned is that it’s easy to get caught up in your ego. You just got to be humble. It gives you structure. That’s the most important thing,” said Lopez.

You can’t get a job. You need papers. What do you do? You jump into trashcans and pick out cans and give them to your cousin to sell for scraps of money. Everything requires a state ID or a Social Security number. But you are determined. It’s not going to end in a trashcan for you.

You go to college and learn how to cook. You find yourself in kitchens working long hours. It’s okay because at least you aren’t in a trashcan anymore. You are cutting vegetables at a mythic pace. Everything happens so quick in a kitchen. You have no time to process, and you just have to keep going, keep chopping, keep grinding. 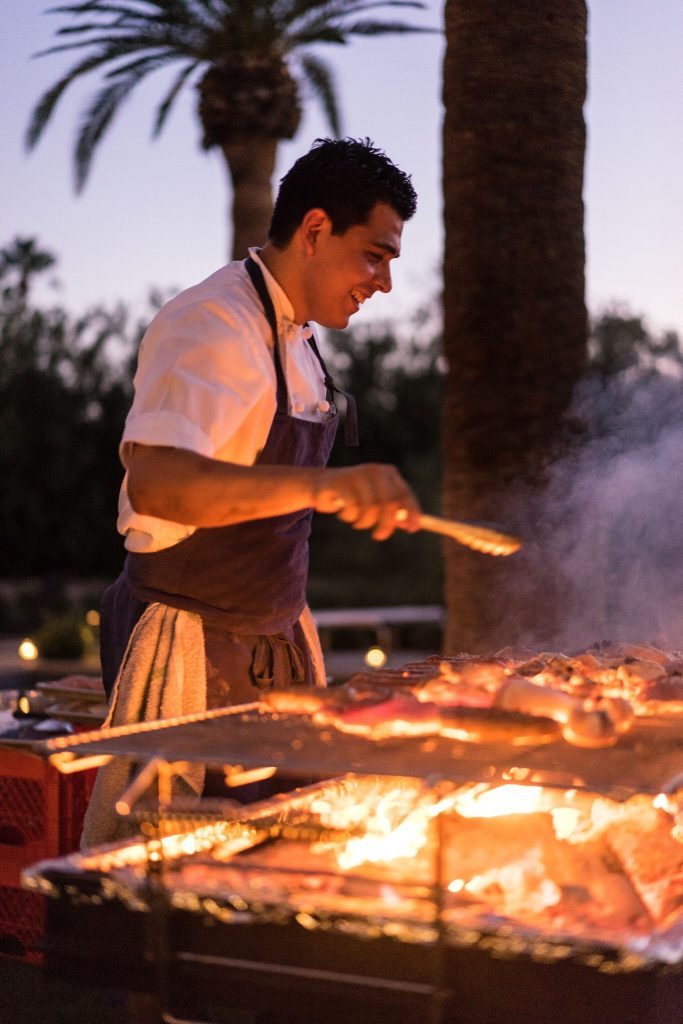 For a long time, Phoenix chef Suny Santana was planning to be a pro soccer player. He attended a soccer academy in Mexico and practiced religiously. Once his family moved to the United States, he started to change his mind about where his life would go.

High school was challenging for him, as he couldn’t get work because of his immigration status. His dad was a mechanical engineer, and he realized really quickly that he didn’t want to do that. His mom cooked a lot, so he started making his way into the kitchen with her. “I asked a bunch of questions to understand more of what is going on behind the scenes,” said Santana. “She corrected me on a lot of things. When we were cooking, we were really talking about life. You’re cooking, you’re cutting a vegetable, but at the same time there were all these questions. An hour or two hours would pass, but it wouldn’t even feel like it.”

Eventually he decided to attend Phoenix College and take cooking classes, which propelled him to apply for kitchen jobs. He worked long shifts at various restaurants before finding Aaron Chamberlin’s St. Francis, where he applied four different times. Chamberlin eventually gave him an opportunity. Santana decided to use a friend’s Social Security number to take advantage of the opportunity. A week after submitting the number, Chamberlin came back and told Santana that they knew it wasn’t really his. That’s when Santana had to tell Chamberlin the truth, that he wasn’t legal.

Instead of turning him away, Chamberlin decided to help Santana get his papers – this was around the time that DACA was being implemented. Though Chamberlin couldn’t employ Santana until he got his paperwork, he would call him daily during the process. The papers eventually came, and they were able to continue their collaboration. An amazing opportunity recently opened up for Santana to partner with Chamberlin and Gennaro Garcia on a new restaurant, Taco Chelo in Roosevelt Row, and they are working on that now.

Santana is ardently religious and believes that God is the source of all his success thus far. He recently renewed his DACA paperwork, which extends his time in the United States for another two years, and he is in the process of obtaining a green card. “Coming here as illegal was hard, but DACA gave me an opportunity, and now I am working to become a resident of the United States,” said Santana. “That’s a big step. This country has opened doors for me, and if I can also help out this country, I will do it.” 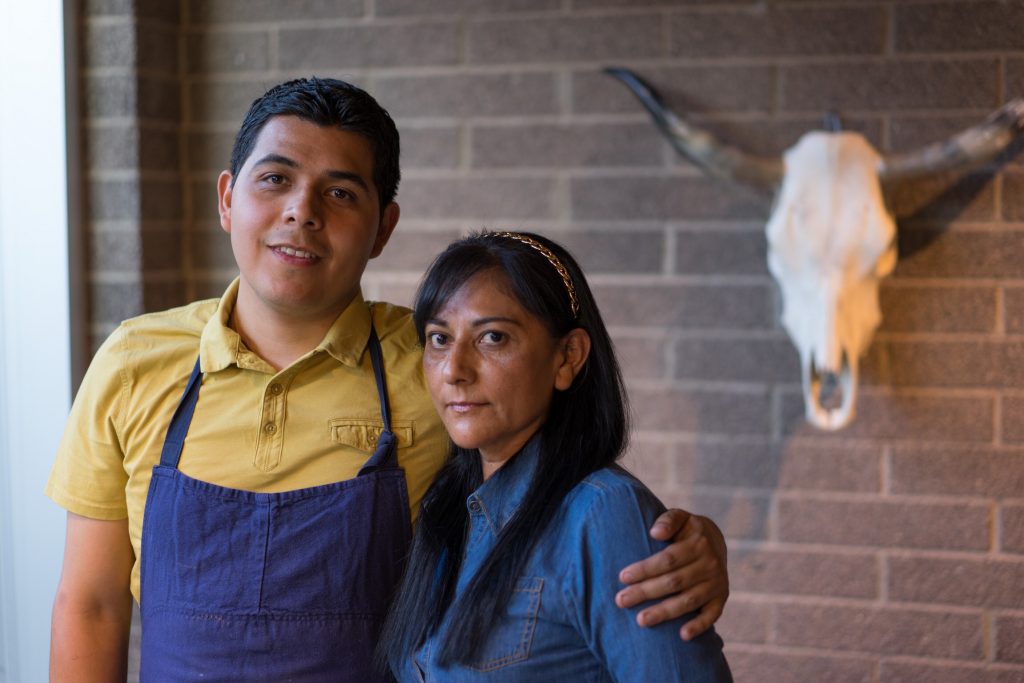