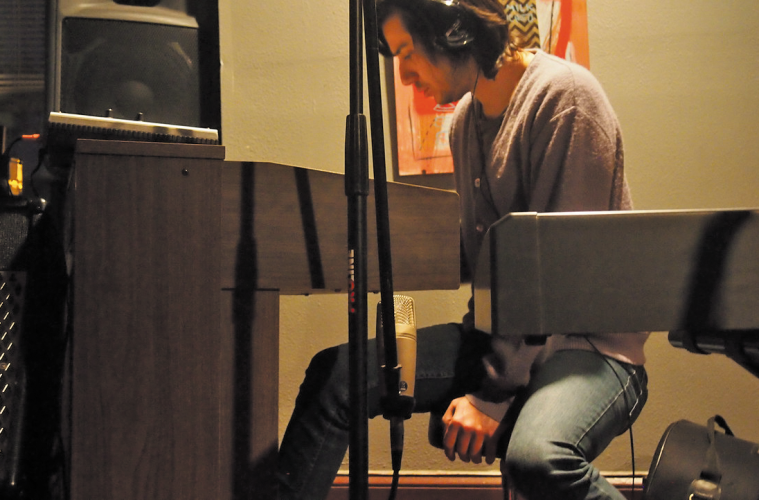 When Bryant Eugene Vazquez lived in Arizona, everyone called him prolific, including myself. After all, not only did he have a slew of solo albums, but he was also in decker.,  Murdoch and Vagabond Gods. Needless to say, when he left Arizona for Philadelphia two years ago, he had already amassed an impressively large discography. Since that time, he’s released even more solo albums, with others in the works. It appears that Vazquez’ prolific period hadn’t actually started yet when he was living out here and has instead blossomed on the East Coast.

His most recent accomplishment is All Damn Day/The Greatest Hits, which is his first full-length foray into the world of pop. This is not pop in the sense of current chart-topping acts—more like Dylan-esque hits from the 1960s. The results are impressive, especially considering that with few exceptions Vazquez is the one performing all the music on the album. It is consistent across the 13 tracks, and it features some of his finest works to date—certainly some of the catchiest.

Despite the Arizona fingerprints on this recording—it was mastered by Fred Huang from Of the Painted Choir and the new Tucson-based project Asian Fred—All Damn Day/The Greatest Hits was born out of Vazquez’ time adjusting to life in Philadelphia.

Upon its release, he said of the album, “Philadelphia kicked my ass all over the place in 2014. This is the result of such a thrashing.”

“I started the album at the beginning of summer [2014], didn’t really finish it until this year, back in May,” he said. “I started the process of the album drinking a lot and finished it completely sober. Now, I’ve been sober for about a year.” 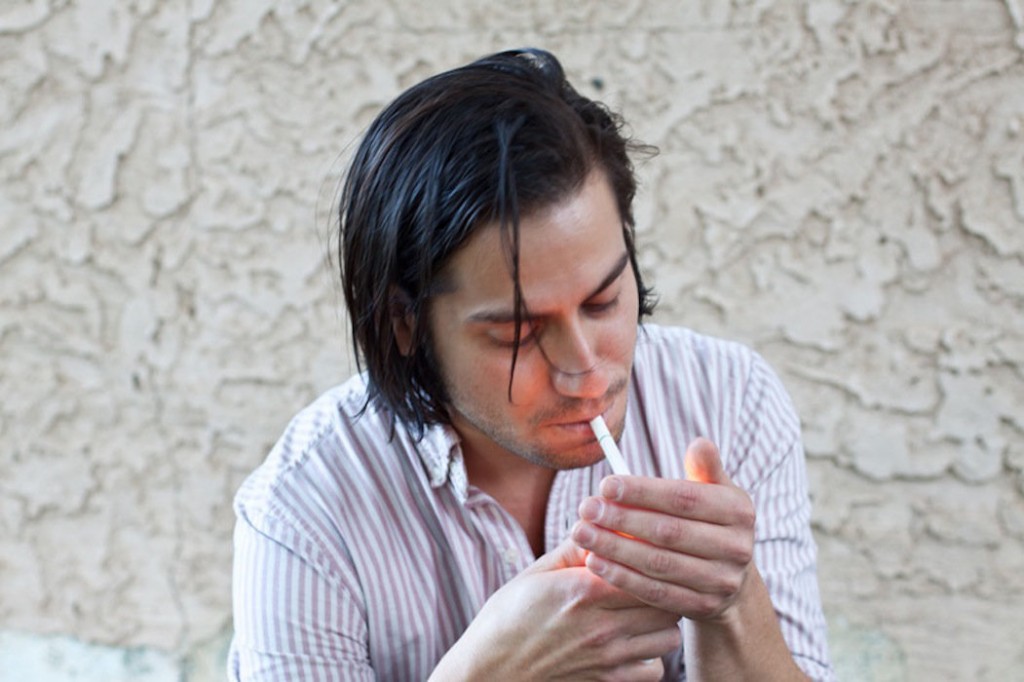 He says that his productivity and creativity have skyrocketed. It appears that Vazquez’ super powers are even further enhanced by a clear head and healthy body. While many artists often find it difficult to create upon achieving sobriety, Vazquez has turned this change to his advantage.

All Damn Day/The Greatest Hits starts off with the title track, and it’s a bit of a locomotive number with some twang to it. Vazquez’ comes out screaming lyrics of desperation with a voice that’s rough hewn, a throat filled with sawdust and gold. It’s a great beginning and a powerful one, both in the music and the words.

“Reaching out upon the grey, why can’t my hands stay still? Trembling, mama!” he shouts at the start, with imagery familiar to anyone who has had to put down a bottle, if only for a day.

If you listen to it with your full attention you’ll marvel at the complexity of the percussion and yet the minimalism of the composition. It’s even further fascinating when you consider this is a one-man operation making all this glorious music.

“Daaang! (Cool Hand Sam)” follows and it has a heady, late ’60s feel to it, more akin to The Seeds and the Velvet Underground, yet with Vazquez’ unique vocal style. Fitting with the sound of the protest era, it comes across as a wry commentary on the everyman who works through 40 years of doing what he’s told. The guitar solo is inspiring and the congas in combination with the tambourine are sublime.

The song that screams “single” early on is “How to Go About It…” and it’s one of my favorite tracks of the year. Bob Dylan and Lou Reed would both be proud of the lyrics, which seem like poetry about jaded self-destruction set in motion. The brilliant addition here is the trumpet courtesy of Kelley Cosgrove, one of the few instruments Vazquez doesn’t play. Vazquez recently released a video for this particular track that features seven different versions of himself at the same time performing the song.

“What’s Paisley? (City Blues)” stays within the pop realm, but instead of recalling the 1960s, it brings Royal Trux to mind and other similar artists from Drag City and Merge in the 1990s. It has a quality akin to “Junkie Nurse” without sounding anything like it. Meanwhile, “Pretty Gotdamn!” is a slow-paced number with a druggy, heady feel and a bassline from hell. It’s almost haunting in its arrangement, with interesting vocals in a rare falsetto.

“Ain’t Nothin’ Wrong With Cherie” returns to a bit of jangle indie pop, with playful guitar, harmonies and a lovely melody for sure. It’s difficult to tell if it’s about an actual girl amid the height of addiction or a fantasy found in that same state.

“And if it’s all the same, We’ll both do nothing, but lay in bed, and drink and smoke and make it. It’s crazy, but let’s stay. The outside noise is all but loving, unlike the noise we make.”

Even the phrases, words and imagery seem like they are from another era.

There’s a slow but unsettling sense to the guitar that starts “The Barber’s Son,” and to tell you the truth, it reminds me of Brandon Decker. I’d love to hear decker. cover this song, because it would fit right in with their set. There is still more than a hint of the desert in Vazquez’ soul, and this song is a liberal sampling of that. It’s ghostly and achingly beautiful, with the poetic voice as raw as the words being sung.

The pounding pop sound that pervades the album returns on “Madcap?!” It’s got a great guitar riff and rhythm that will keep your head bopping, foot tapping right along for all two minutes of this mini masterpiece. The same feeling continues unabated with “Mexican-American Modernist,” but with darker themes and a great lo-fi beginning, featuring street sounds from the window outside. The poetry continues to flow with lyrics like

“Out of darkness, still in the night, showered by rains, during daylight, she said she fears the lack of color in my eyes.”

The imagery is replete with desolation and more than a touch of pain. The mesmerizing guitar twang and VU-inspired rhythm in the end makes me want the song to go on for eight more minutes.

“Le Sigh/Love Spit” has an amazing catchy hook and seems to revolve around imprisonment, whether real or metaphorical, but it also has a total sense of romantic yearning to it. This track features a great harmonica piece that underscores the Dylan vibe. It ends poetically, with what sounds like raindrops hitting hard.

The tempo slows with a touch of Latin guitar that makes “2nd Time Around” go down smooth. It’s about returning to a love for another chance, with a pretty realistic list of all the baggage that kind of thing entails. It starts off sweet, but it ends with a languished howl, which is often how a second time around goes in real life. It’s actually a pretty touching number and is brutally honest about lying, lusting, trying, sighing, dying and trusting or not trusting, as it were.

Referencing a key bit of dialogue from Wes Anderson’s Rushmore, “Fischer Ain’t Yer Mate” is another ’60s-drenched pop number with a classic groove and lyrics that even mention the Twist. It sounds like it could have been recorded in that era, and the only thing it’s missing is a group of girls doing backing vocals. Yes, there is hand-clapping and a break that kills me every time. The guitar gets twisted, the harmonies are alternately surf-like and eerie at once, like a demented take on beach blanket bingo with lyrics written by Rimbaud.

The finale is only the second song on the album that features additional musicians, and in this case it’s keyboards, courtesy of Marcus Kitchen, who helped mix the album. Cosgrove returns, as well, to add background vocals. It is one of the finest moments on album and is Vazquez at his Dylan-esque best. The whole motion of the entire thing just sweeps you away and wraps you in the beat poetry of the passionately delivered lyrics. It’s about having a rough time of it, but essentially facing up to it all. In the end what that apparently does is produce some fine music. It is the perfect ending to this lo-fi document of a wounded artist burning with creative brilliance. The production value, or lack thereof, makes it all the better, all the more authentic and captivating. There is an urgency found here that is lacking in so many records.