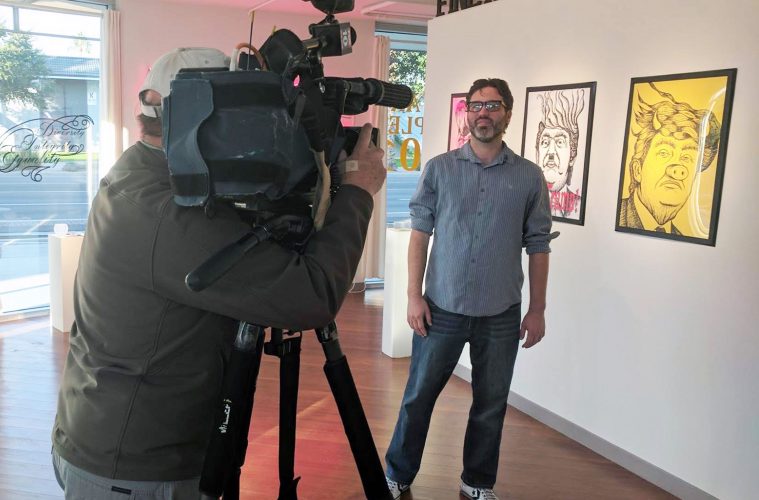 Grant Vetter: A Man with a Plan for the Phoenix Art Scene 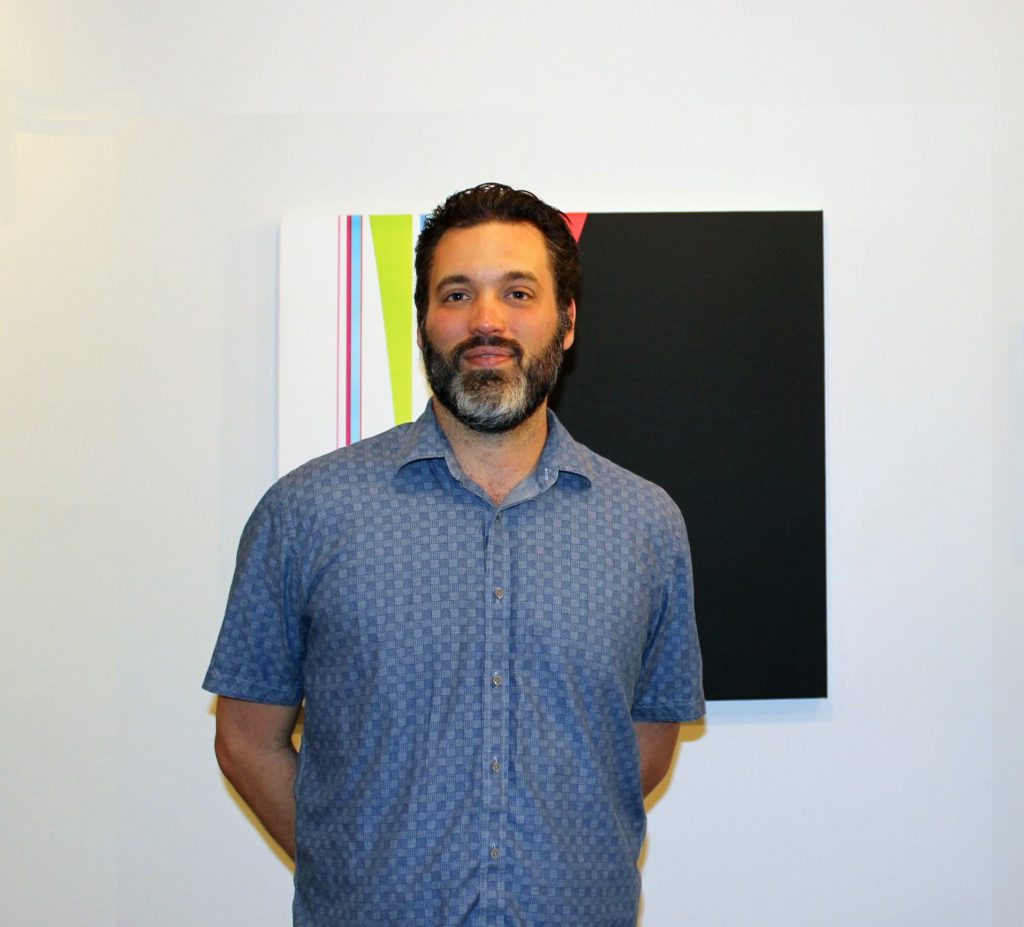 There has been a lot of talk about what the metro Phoenix contemporary art scene needs to become known on national and international levels. Unfortunately, it’s not easy to find people with the skills and experience who are willing to do the work. Lucky for us, we didn’t have to call a doctor for help. Dr. Grant Vetter enthusiastically stepped up to face the challenge when he moved to Tempe from Los Angeles in 2014.

Equipped with a Ph.D. in media and communications, as well as a Master of Fine Arts, with a minor in critical thinking, Vetter has had his eye on Phoenix and Tempe for the past 20 years. He sees them both as “perfectly set up to be thriving art cities.” What finally brought him to Tempe was the presence of ASU’s main campus, along with what the City of Tempe is doing to promote the arts—as well as the ease of acquiring a property. As gallerist in Los Angeles, Vetter tried to purchase a property for three years and, in his own words, “failed completely”—whereas upon his arrival in Tempe, Vetter was able to find a property to house his gallery within 72 hours. 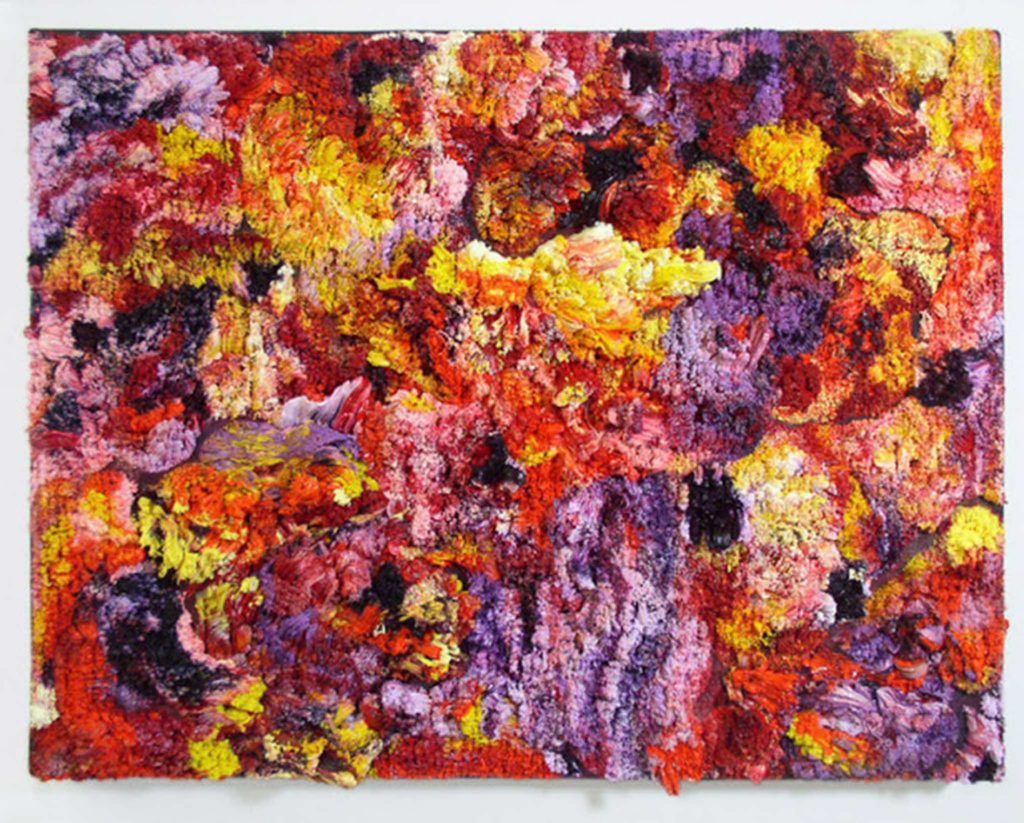 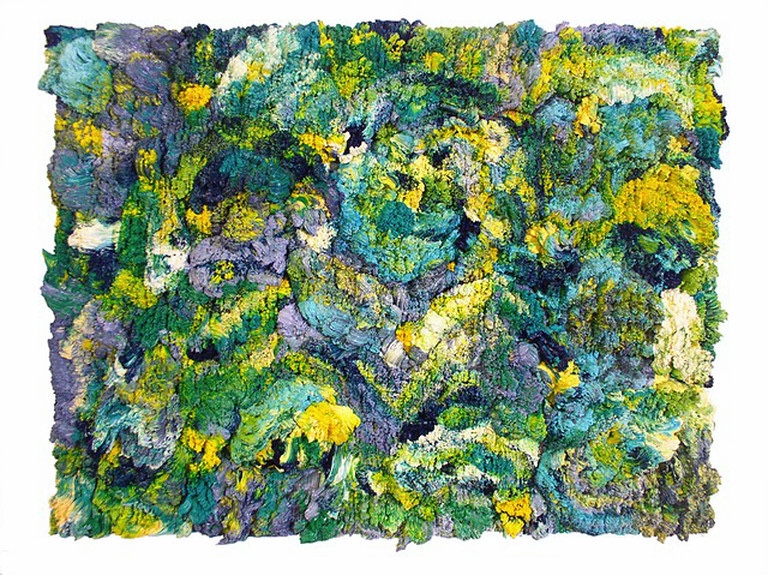 I met with Vetter at his office. As the gallery director for ASU Herberger Institute for Design and the Arts, his office is conveniently tucked behind one of the several on-campus galleries he manages. Behind a door on a starkly lit wall is Vetter’s huge art and philosophy book collection. Eight-foot-high bookshelves cover three of the walls, surrounding a dark, homey rug and a modern grey reading couch. The space is warm, dimly lit and comfortable. It feels like a modern version of a Victorian gentleman’s library.

Glancing around at a few of the titles, including Vetter’s own book, The Architecture of Control: A Contribution to the Critique of the Science of Apparatuses, I start to get a sense of what might be swirling around inside Vetter’s head. Contrary to the stereotype of a person with such an extensive resume and library, Vetter isn’t your typical stuffy, tweed-wearing academic or snooty hipster philosopher. He’s a young, semi-shaggy, approachable guy in a T-shirt and jeans, with a crystal-clear way of communicating that generates comfortable and open conversations. He has a way of explaining very complex philosophical ideas in a way that is accessible to the average Joe.

As a gallerist, curator, instructor, author, critic and artist working to put Arizona on the map for contemporary art, one might expect to find a frazzled mover-and-shaker type, complaining about how chaotic his day was. Instead, when I stepped into his well-organized office, Vetter was calmly stationed at his computer, responding to an email from an MFA student with a pressing art-related issue. Vetter truly cares about his students, and I watched as he took the time to delicately defuse the situation. After hitting send, he swiveled toward me in his chair, became fully present and began to tell me about his understanding of the art scene here and how he plans to use his experience to help move it forward. 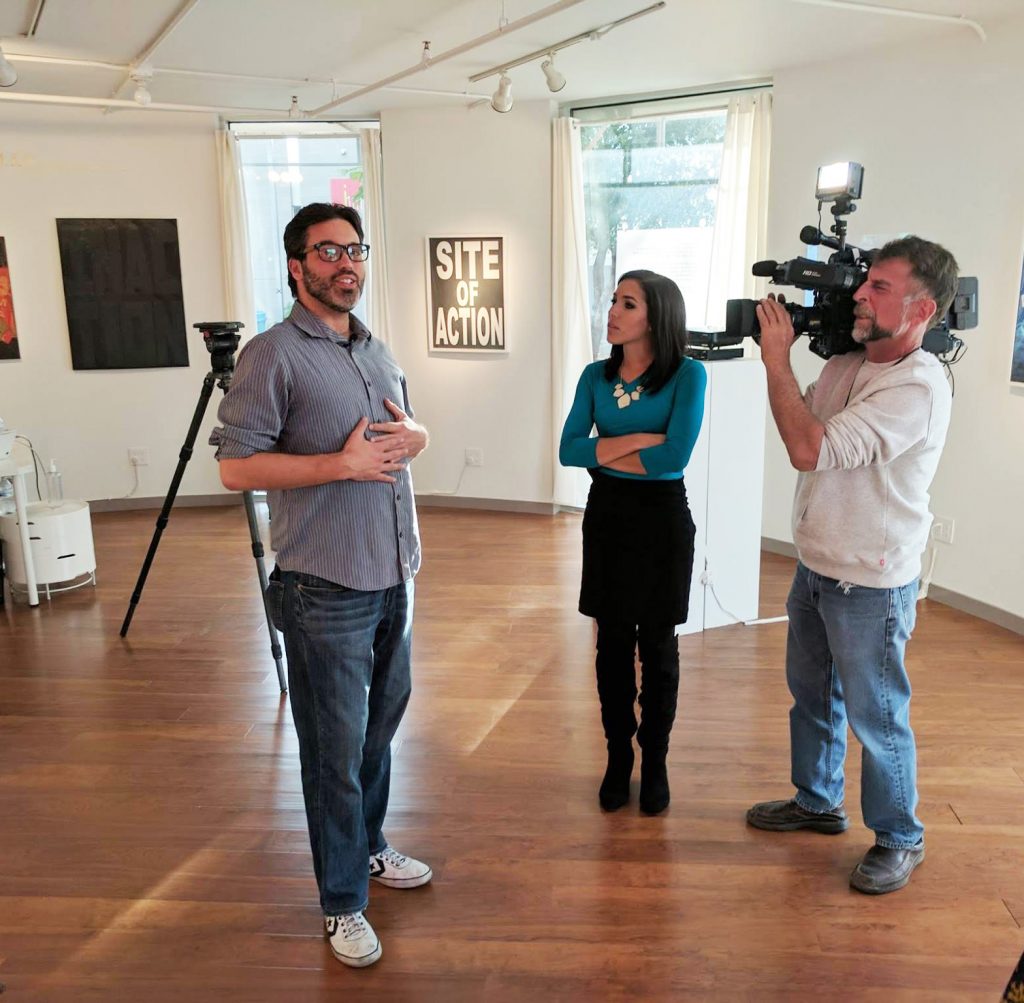 Vetter has strategically positioned himself in city planning meetings for arts district programs in Phoenix and Tempe. His non-profit gallery, Tempe Fine Art Complex (FAC), where he exhibits cutting-edge and sometimes controversial work, is located near the university and is about a 15-minute freeway drive from downtown Phoenix. Finding a location that could bridge the gap between the art centers was a smart move, allowing him to keep a bead on both cities.

While the downtown Phoenix scene is having some growing pains, Tempe is not far off from having a thriving art walk of its own. Grant pulled his monitor around to show me a map of Tempe highlighting where the art centers, shops and alternative spaces are, as well as where the potential art collectors work and reside. “We are going to have a highly concentrated metropolitan area in Tempe where people live and work within a two-block radius, making this a very powerful art walk,” Vetter says with an approving nod.

This isn’t Vetter’s first rodeo. He was on the art walk planning committees for Long Beach, Santa Ana, and downtown L.A. He has heard all of the strategies and knows what works. “It’s fun to have ideas, but it all comes down to who is going to put in the hours and the feet on the ground,” he says. Vetter puts his money where his mouth is by hopping on his bike and physically knocking on doors, zeroing in on possible investors, venues, start-up companies and art collectors, dispersing information and invitations to art events, and creating a buzz on the street as well as online.

One of Vetter’s major crusades is to encourage local art organizations to use better and more professional images and to make the information on their web pages more easily accessible and, most importantly, up to date. When Vetter is not hosting his own events or attending committee meetings, you will find him at art openings showing his support for the artists and venues. He also writes critical essays about local artists’ work and exhibitions for The Arts Beacon, a website dedicated to Arizona art.

Currently Phoenix isn’t known for contemporary art, and Vetter says that needs to change. “When you bring up other cities in the region, like Santa Fe, Dallas and Las Vegas, they are known for something related to contemporary art. Santa Fe is known for seminal artists, like Agnes Martin, who’ve retired there, and Dallas is up and coming for abstract paintings and the wealth of its collectors. Las Vegas is known partially because art critic Dave Hickey valorized and capitalized on the day-glo painting of artists like Tim Bavington and Yek, creating a sense of regionalism. When you get to Arizona, the conversation about contemporary art goes silent because they don’t associate us with anything, and that is a problem,” says Vetter.

As an immediate response to this problem, Vetter is doing his best to write critically about Arizona art, putting it in the context of the larger art world. He goes on to say, “We have all of these incredible producers [artists], but they’re all over the Valley, and it takes time to find them one by one.” While on the hunt for local artists, another tactic Vetter uses to gain attention outside the state is to curate shows that include artists from other cities. His current exhibition, Abstraction in the Singular at Bentley Projects, includes nationally known artists and under-recognized local artists in a painting survey that rivals anything you would see in L.A. or New York. Shows like these will generate press outside the state and make people curious about what is happening here in Phoenix. 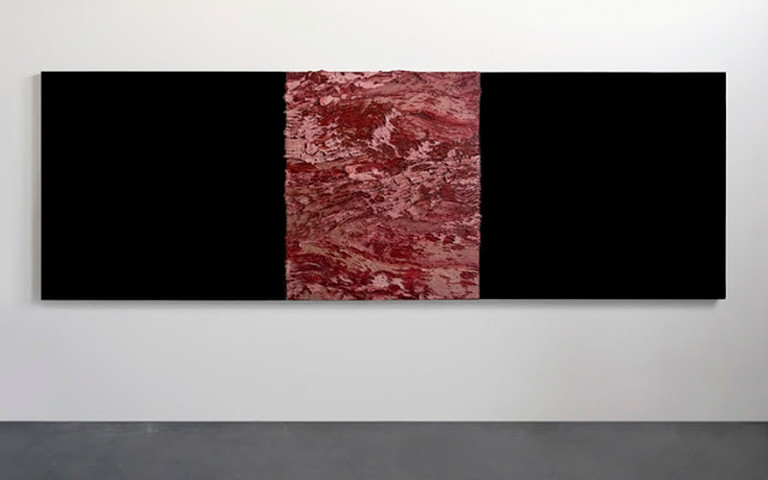 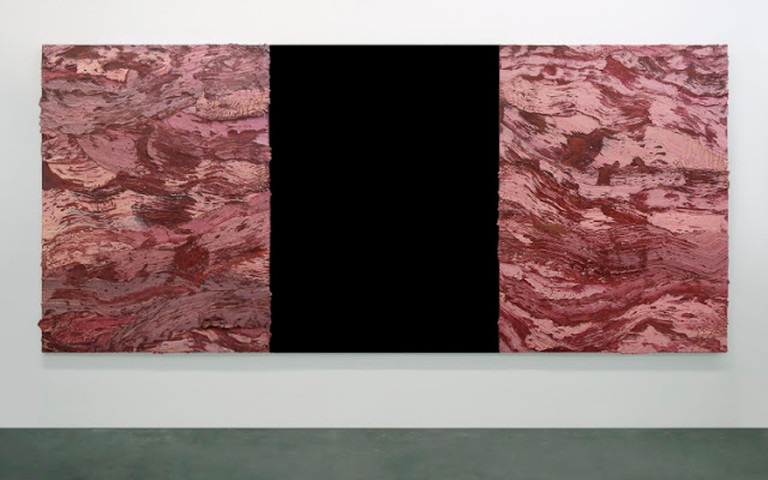 Vetter is also an artist himself. Art world luminaries such as Lucie Lippard and Kay Saatchi have selected his paintings for exhibitions. He has shown internationally and received several awards. Since moving to Tempe, his painting career has been on pause until he feels that the art scene here has taken hold. As an artist, he wants to enjoy the same benefits that he’s helping other artists to achieve in their careers. When I asked him if he is currently making art, his response was enthusiastic. “Yes, absolutely, writing is creative! Moving to Phoenix has felt more creative than any other time in my life. Every day is a series of crises that need to be solved creatively and not bureaucratically.”

While on the topic of using creativity to solve problems, I asked Vetter if he thought that art could save us from the “control society” he refers to in his book. His response took on a serious tone: “I think it has to.” He explained, “We can’t carry on with the current mode of production because it wastes resources and turns the planet into a big dump. I think that the only mode where the planet survives, where we survive, is the artistic mode of production. Artists can initiate change on all levels through experiments in rethinking things like urbanism, the environment, et cetera.”

Setting the stage for a thriving contemporary art scene is no easy task, but when you believe that art can change the world, it becomes a passion and a way of life. As a call to action, Vetter says, “We have dynamic people in town that want something to happen here. There is a huge changing of the old guard in our museums. All of us interested in where we fit into the puzzle have a chance to find our place and use our strengths while things are being stirred up. I’d love to see people jump in and do it!” The Phoenix metro area art scene is rising again. It’s time to show the world what we’ve got. 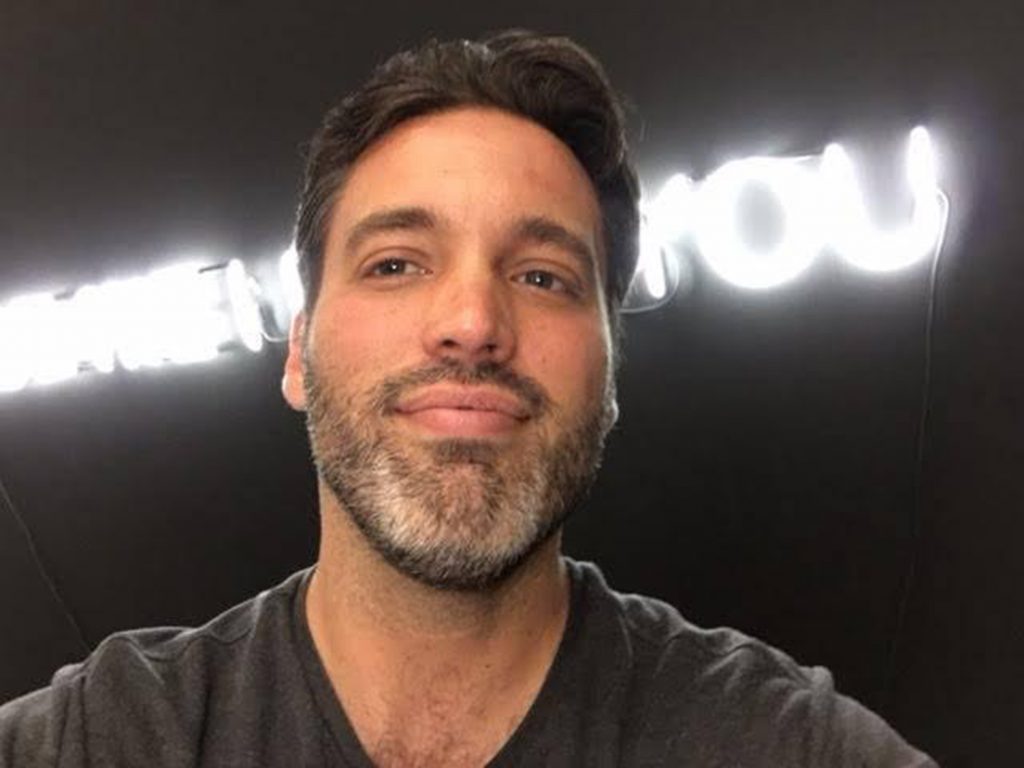