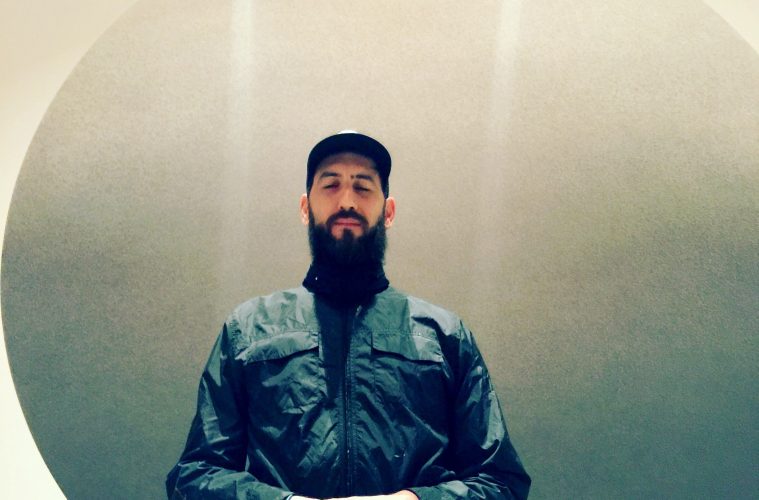 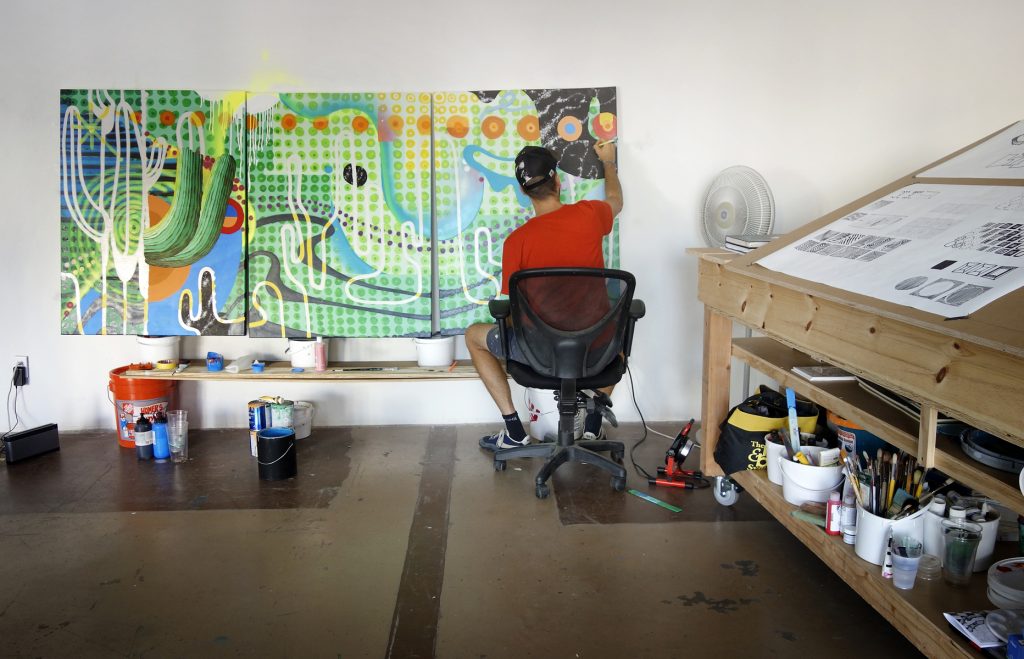 When I met Phoenix-based artist Andrew Brown recently for morning coffee, he relayed a story about a meeting with executives from Imai, a smaller clothing company based in Tokyo, regarding licensing of the Sleisure brand in Japan. Originally, Brown and a few other American artists were to meet the Imai executives in Los Angeles, but in a moment of boldness, Brown requested that they come to Phoenix.

Brown said his thinking was, “If they’re serious about starting a Sleisure chapter, they should come to Phoenix. This is where it was born back in the mid ’90s, and this is where it continues to grow.” After a brief tour of Brown’s murals around the Valley, a visit to his studio for a few games of ping pong and a break at Windsor to sign paperwork, the Imai group headed back to LA to meet with other artists. Almost immediately they sent a message back to Brown, saying that they already missed Phoenix.

The contract Brown signed with Imai coincides with the 20th year of the Sleisure (aka Soldier Leisure) line. Once a year, Brown will travel to Japan to paint a mural and host art classes with the community in Tokyo or the Hiratsuka City area. This is all part of the business agreement, but its purpose extends beyond generating revenue. It’s driven in large part by Brown’s desire to share and exchange ideas, as well as maintain a human feel throughout the commercial process. 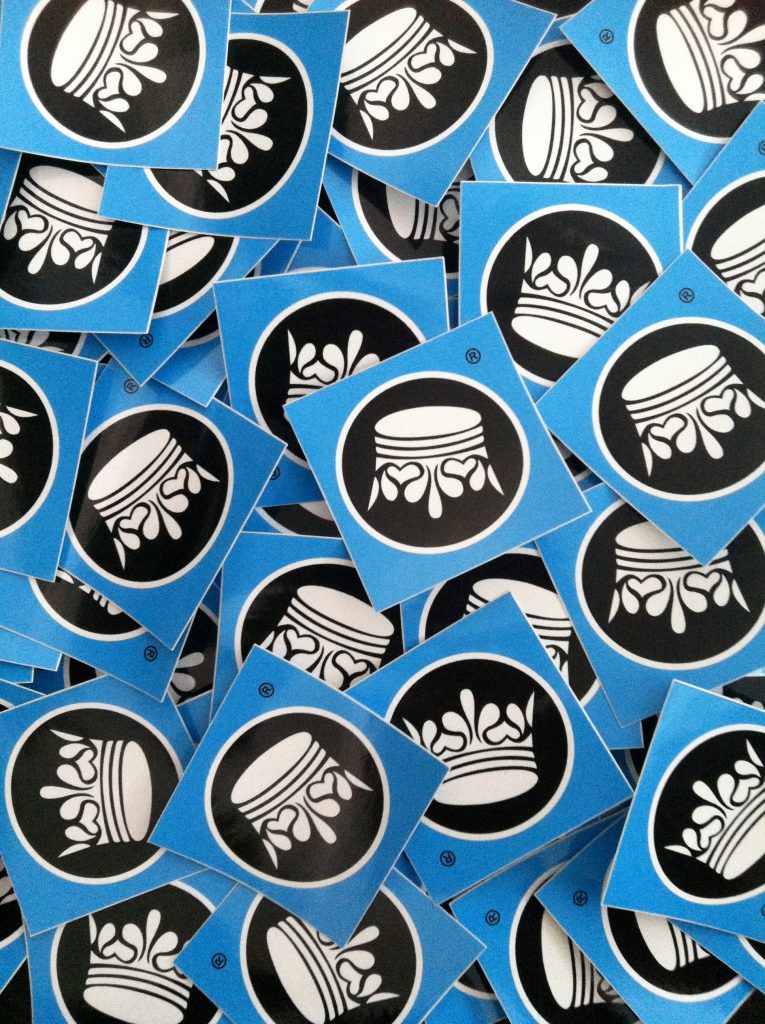 The Sleisure brand had its beginnings here in Phoenix as an outlet for Brown and his friends. The goal was to find an accessible way to share his art with the public. “I knew that if I wanted to live a creative life, I’d have to get away from the drawing table and interact with people through my work. Printing t-shirts was a great way to do that, so I got a job with a screen printer and learned to do that.”

Over the years, the clothing line has remained a side business for Brown, while he now works full-time as a muralist and painter in Phoenix, San Francisco, Brooklyn and other cities around the world. Known for his bold colors, abstract and topographical shapes, top-view pieces, the iconic “happy man” and other original content, Brown continually derives inspiration from everyday life, people and the natural world. 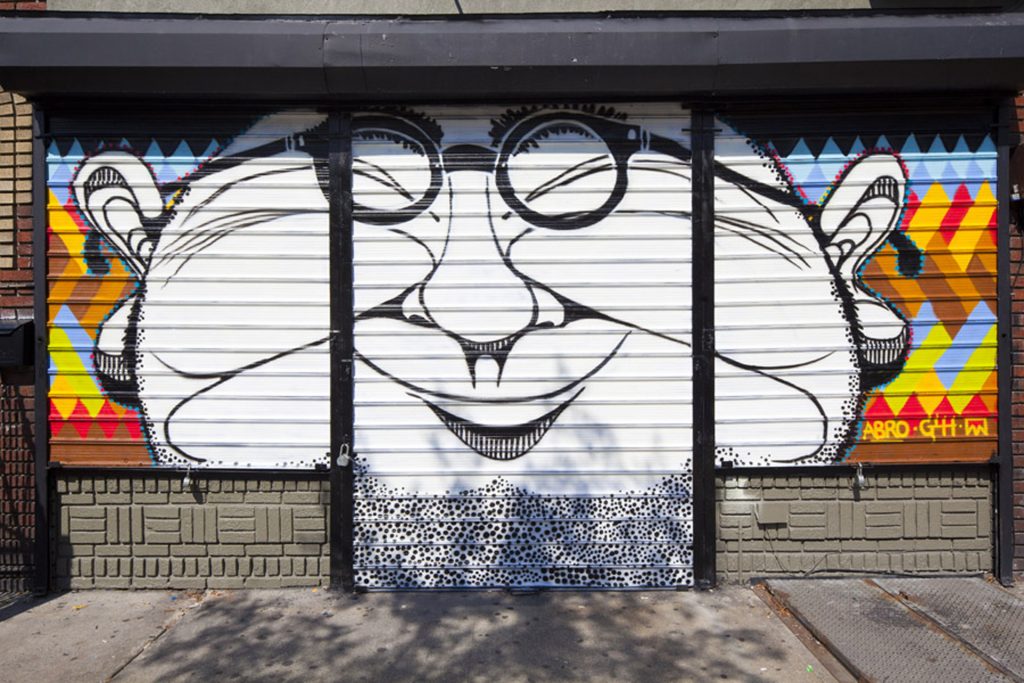 In the early days, his work was inspired by hip-hop shows and skateboard contests at Patriot’s Park (now Cityscape), as well as punk rock, graffiti art in Phoenix, and his friends who gave Brown the urge to share his art. “I had friends that were killing it in graffiti that were inspirational, and then I had friends who were taking care of their parents, and that was inspirational.”

Today, Brown still looks for ideas in unlikely places. While giving a mural tour in central Phoenix, Brown relates a story that took place during his involvement with the Let’s Be Better Humans project sponsored by Downtown Phoenix, Inc. Brown had been commissioned to paint a mural on a shipping container on 1st Avenue in the parking lot of the downtown YMCA.

During the initial phase of painting, a resident of the YMCA approached Brown, asking what he was doing. Brown replied with a simple, “I’m painting a face.” During the conversation, Brown befriended the man, a former construction worker from Chicago, and snapped a picture intended for Instagram. At the last minute, Brown decided that the shape of the man’s eyes in the photo would become the design for the mural. 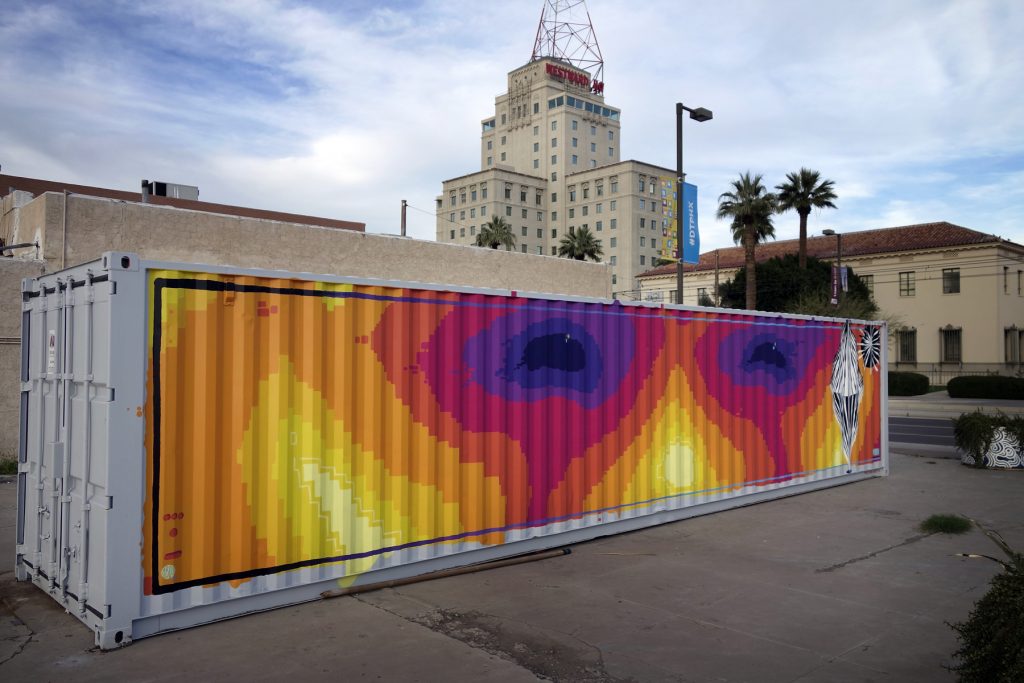 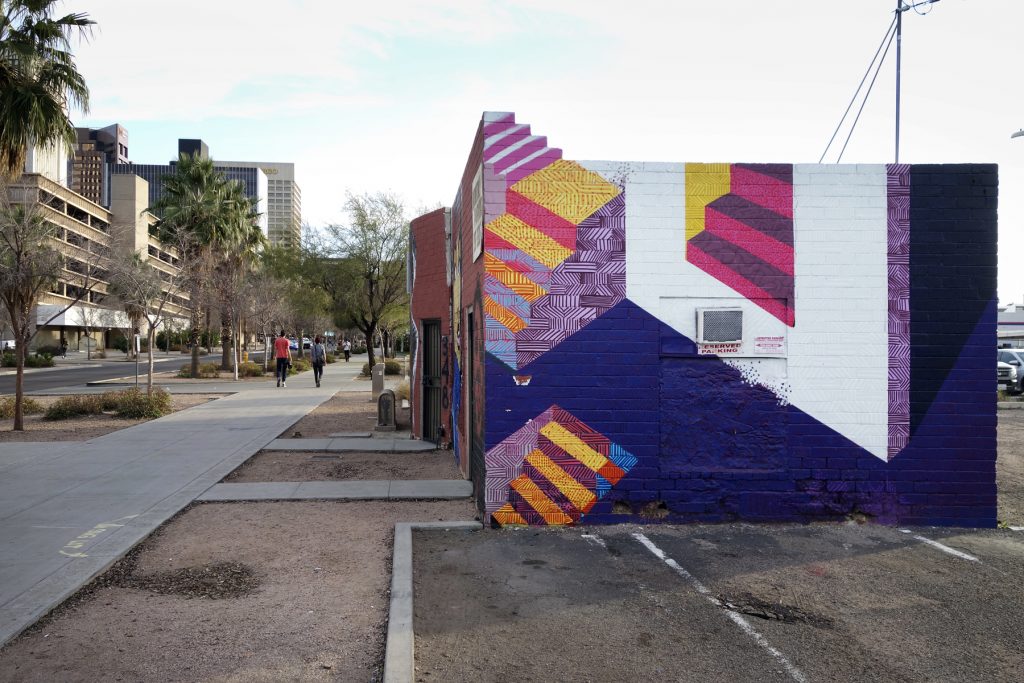 “We can spend so much energy battling with the external world, going for just the right look, fitting in with the right people and maintaining the right public image. Real success for me is not about financial gain or even about being a public figure. It’s about being fulfilled—and that would be the case even if I still had to work a full-time job and art was just a hobby.”

Success in art has as many definitions as there are artists to achieve it. For Brown, the most powerful art springs from a well-developed sense of connection. Fulfillment comes from finding an internal space where new ideas can sprout and flourish. This happens both during the time he spends drawing and when he’s interacting with friends and fans of his work. 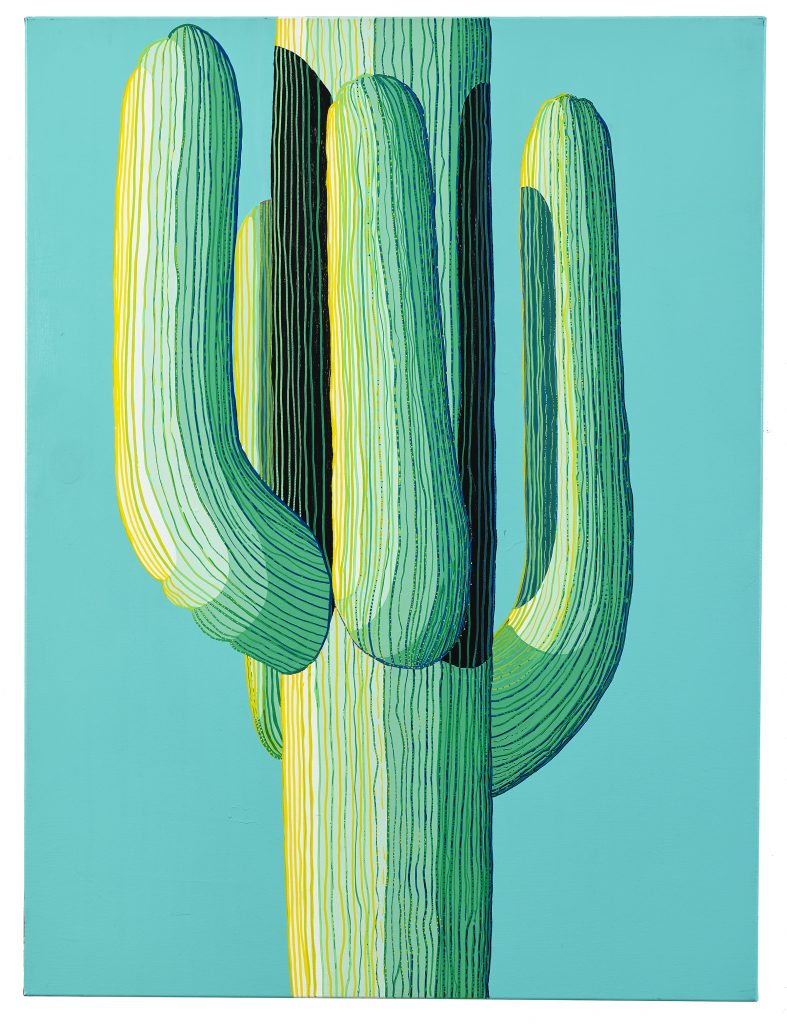 Brown also describes his transition to full-time artist as a slow and steady process. “It doesn’t feel very natural to suddenly decide to switch. I was able to just ease into it, so that I wasn’t front-loading it, and I stayed in contact with myself. I knew that if I paid attention, I’d continually find out what I needed to do next.”

The entire east wall of the Westminster apartment building on the corner of 2nd Avenue and Roosevelt Street in downtown Phoenix is covered with shades of greens, blues and grays in an evolving pattern. The broad, organic swoops fade into digitized boxes along the two-story edifice. On top of the waves of green lie one hundred concentric rings painted in red, gold and yellow—a psychedelic version of the rings of a chopped tree. 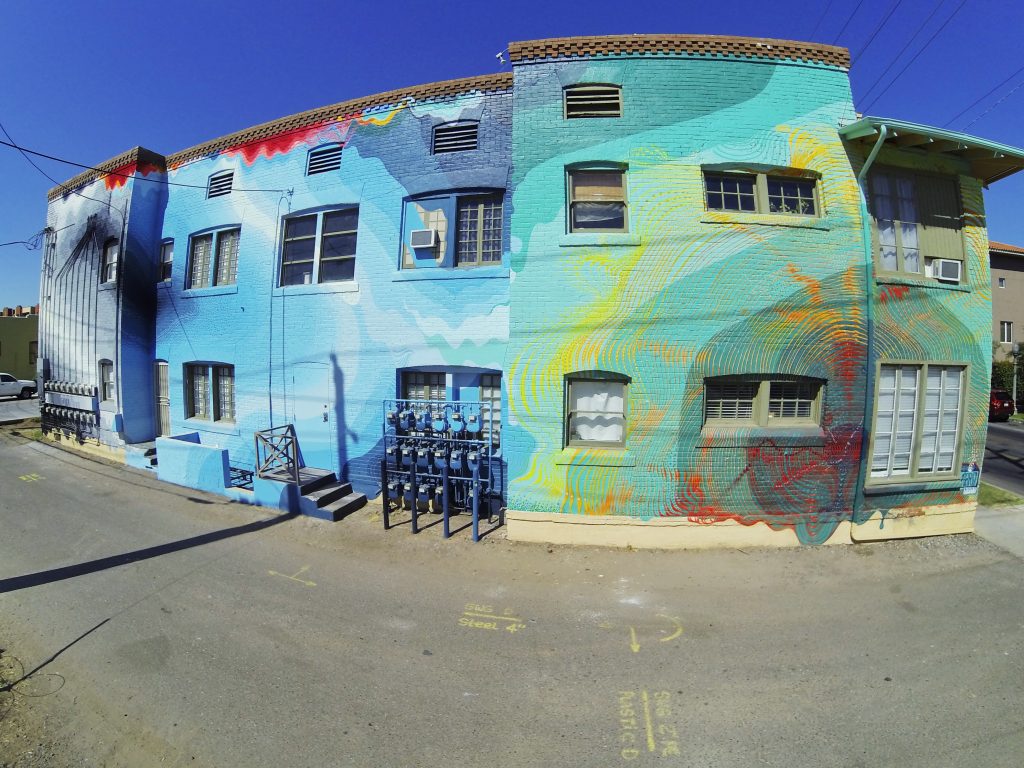 The Westminster wall is one of Brown’s most recognizable murals in Phoenix, and until recently it was visible from several blocks away. Now, a six-story development obscures the view from anywhere except the alley between the two buildings. Like most residents of downtown Phoenix who have been here for some time, Brown’s daily life has been affected by the abrupt construction and scenery changes taking place.

The need to keep a thriving arts community alive is more present than ever before, and is more challenging than ever. Brown’s response to this is to be as proactive as possible. He said, “I think the trick is just to stay focused and not let the noise distract me. There is a lot more noise, but artists are the signal, and if the artists stay focused, the signal will grow stronger.” 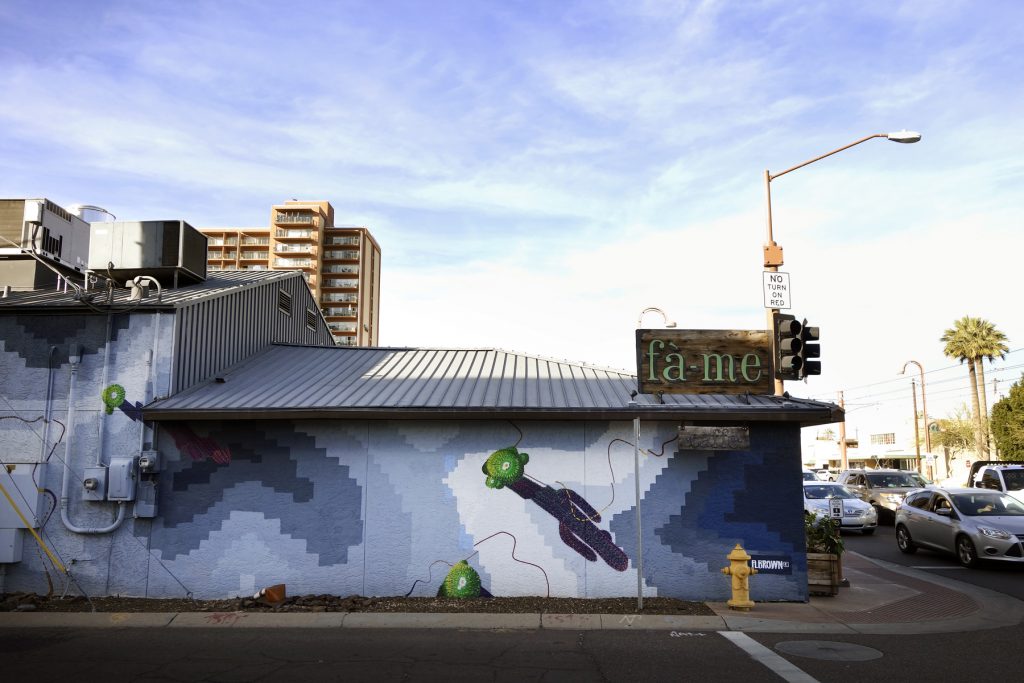 Another one of Brown’s responses to the changes in Phoenix comes in the form of a new space set to open in March. What has functioned as Brown’s studio for the past year will now open to the public as a community space geared toward visual arts. It will also be available for private events. Megaphone Space, an uptown gallery/community space tucked behind Hula’s Modern Tiki, is a collaboration between Brown, Lani Hudson and Christian Adame.

Megaphone Space will serve as the venue for the Sleisure 20th anniversary celebration on March 10, and will have its first art opening on March 18 with “Saguaro Watching Us,” a collection of saguaro paintings by Brown. On April 21, the second gallery show, entitled “Pattern Recognition,” will feature new works by artist JJ Horner. 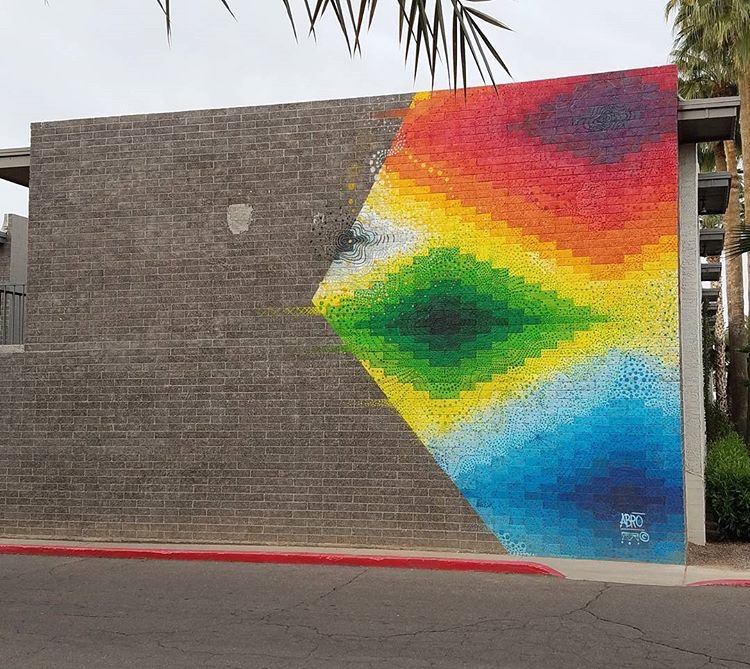 Megaphone will also host several art-related events, including free-drawing and collage nights, which are designed to encourage newcomers and veteran artists to become more involved with the community and the creative process. “We’re coming to the point where people want something besides the gym. They want that same exertion of power, but with some freedom to it. Creating art is an accessible way to do that. You don’t even have to talk—just make that time functional and powerful for you,” said Brown.

In times of upheaval, we are continually looking for ways to find balance in our lives. Artists like Andrew Brown are providing options for rediscovering that balance. “If you draw for ten minutes, you start to shed your default background thinking,” he said. “Whether you’re shading circles, drawing squares or doing something more abstract or gestural, the more you do it, the more you get in the space where you’re expanding your time. You’re in ‘reality time’ and not clock time.” 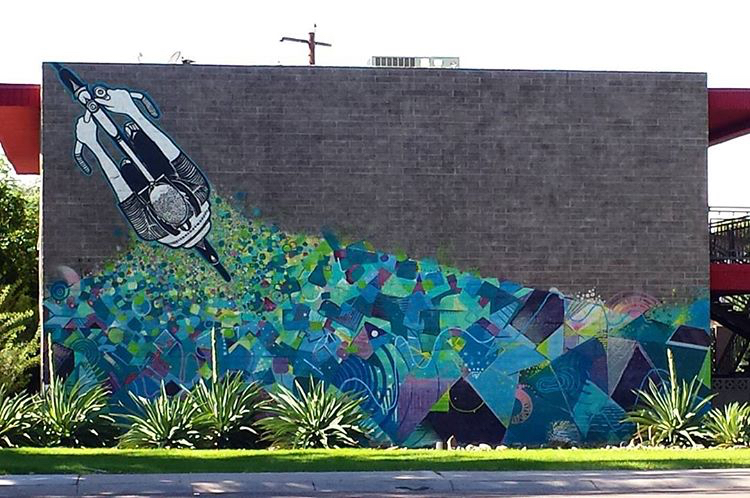 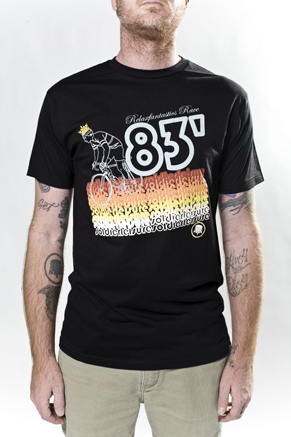 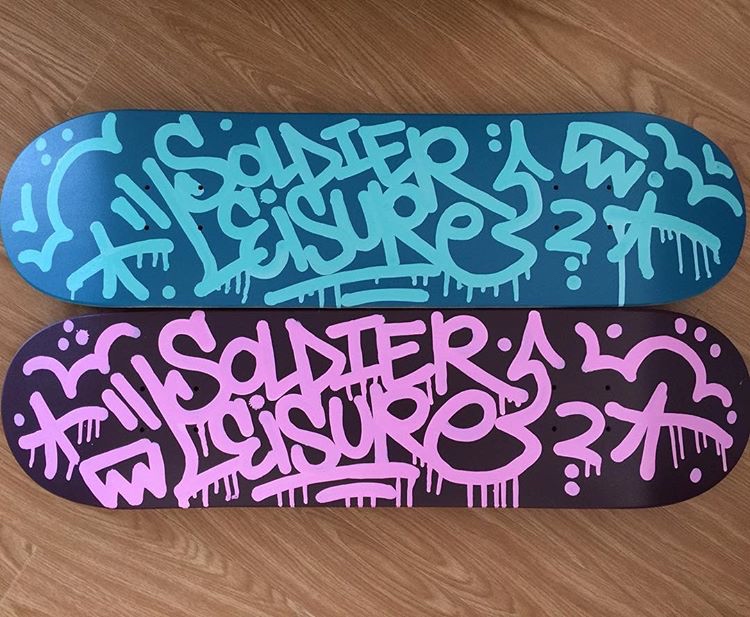 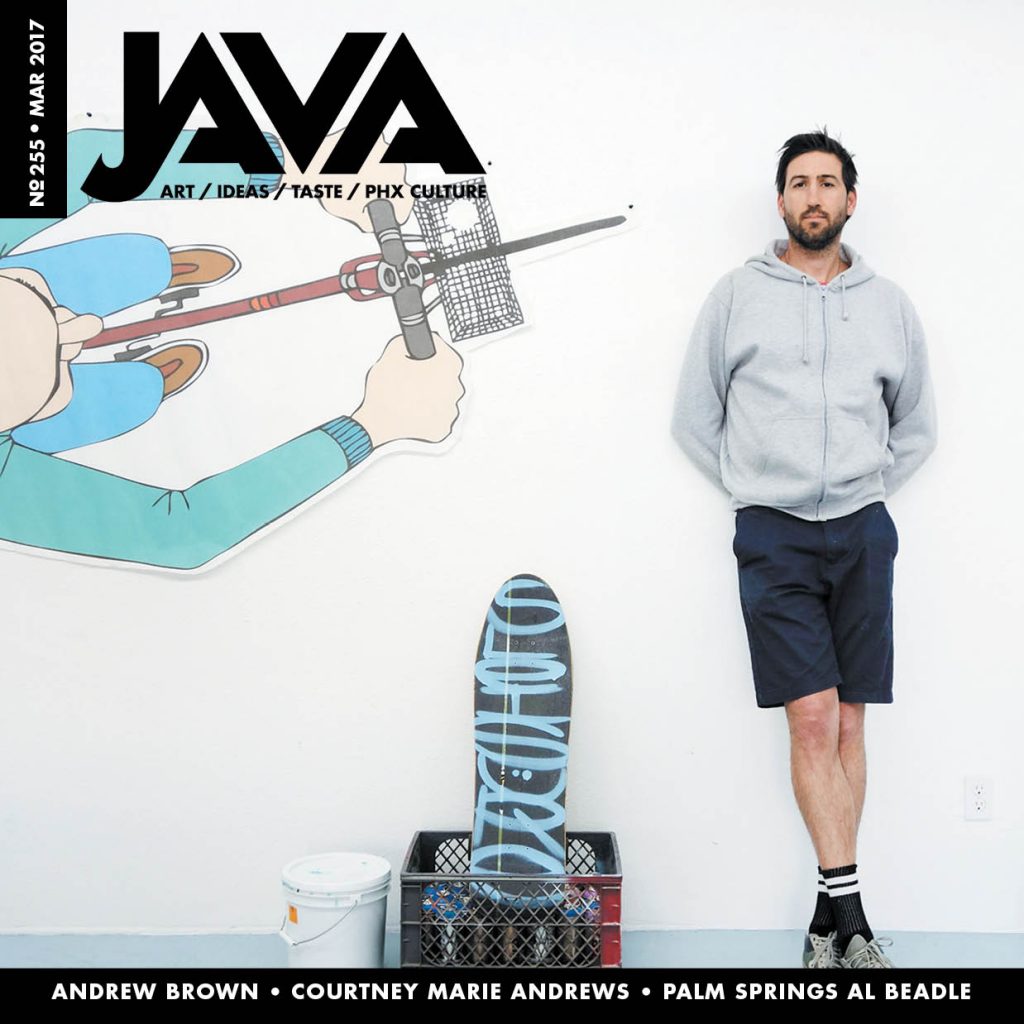