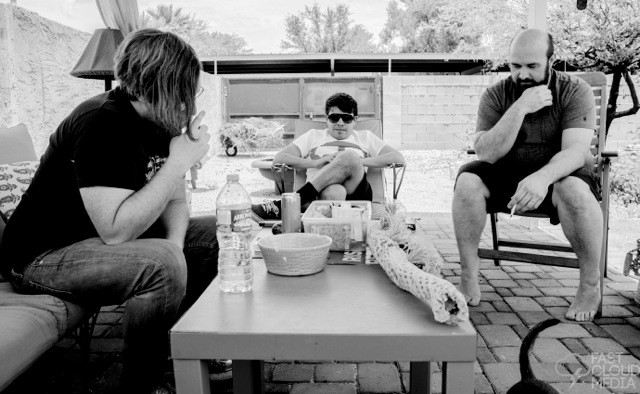 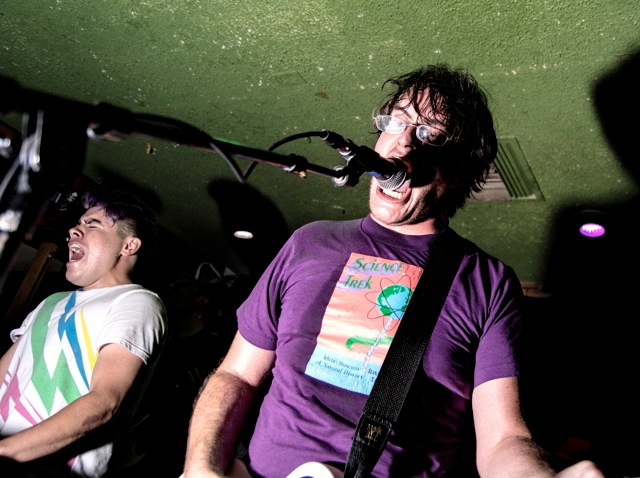 It is hard to believe that Genre first blew me away over half a decade ago. In that time, there have been a few lineup changes. They were reduced to the core duo of Zac Markey and Corey Gomez on their 2014 EP, Scrape Your Voices on the Stars. This time around, they have brought on Trevor Denton (Sun Ghost) to make their first fully realized full-length. Denton has been part of Genre’s live act for quite a while, but this is his first appearance on record.

You have to have some impressive stones to call your full-length debut Legendary Rock Act. While the title may be a bit off-putting, they do their damnedest to live up to their own hype.
Their songs and their songwriting have only strengthened over time. Where Scrape Your Voices far exceeded The Weepy Omelette, Genre’s EP debut, Legendary Rock Act blows their entire back catalog clean out of the water.
One thing to be sure, this album is meant to be taken as a whole. Sure, there are singles throughout, but it is consistent from beginning to end and is best enjoyed exactly that way. With Zac Markey (vocals, guitar, bass, programmed drums, samples) fronting this album much of the way, along with Corey Gomez (keys, vocals) and Trevor Denton (guitar, bass, vocals), there is a balanced, cohesive feel to the band itself.

Legendary Rock Act begins with “Royal Plain 2,” thrusting the listener into a jarring whirl of static, feedback, a guitar mis-start and a sampled conversation between Markey and local rocker Kevin Doll. From that description you wouldn’t get the idea that this is a pretty gentle start for the album. It begins with a couplet of lyrics that are pure gold: “While morale is down, I’m up at 4 a.m. discerning miracles from sins.” The keys accent every nuance, and you are seduced into the album with a sense of curiosity if nothing else. It is apparent from the start that Genre is becoming more of an art band than ever before and that this is the album where their vision gels.

“Beatles Shirt” has been a live favorite for a while, and I’ve been waiting for it on record with eager anticipation. It doesn’t disappoint. This is pretty much where the album launches into the indie rock juggernaut, and it doesn’t let up on the edgy tension for the rest of the record. It’s a look at a crass society inspired by commercialized merchandise, like a Beatles shirt worn by someone who has no real investment in The Beatles. As cynical as it sounds, it’s actually quite hopeful in the end: “I’m still convinced we could save the world, see benevolence in the angry boys and girls who won’t rest until everyone has what they need, transmute fear to love and equality from greed.” This is one of the best rockers in their entire catalog, and when Markey starts screaming, “That’s the way that it goes” while the guitars explode, it’s electric.

It sounds as though a radio dial is being tuned before landing on “Bad Neighbors.” This seems like a gentle number at the start, until Markey starts screaming maniacally and delivers some of his most self-loathing and esoteric lyrics. Still, it is littered with wisdom like “I just believe in me and I came here to set me free” and references to their last record: “Been scraping vocal cords across the galaxy.” Markey sings of more cosmological viewpoints throughout, and Denton’s background vocals are simply perfect to add more sonic weight.

“Tell Ya’ Later” is the sole song where Gomez takes the helm on lead vocals, and unlike their last record, it’s not a shocking transition and fits in with their refined sound. It provides a break similar to the way that Keith Richards does on a Stones record. It’s still high energy and certainly more pop-oriented than the other tracks found here. Yet the lyrics are accurately acerbic, with wry commentary on the zombie-like consumerist culture of laziness.
The dial on the interstellar radio receiver is twisted once again, with interesting, near celestial sounds in the background as it tunes in on the explosive “Riding the Tension.” It seems to be a cathartic, post-breakup tune at its finest, and at a minute and a half, it comes at you like a freight train. The guitars are super heavy, gilded by the keys, held together by the fuzzy bass. It is gorgeous in its confessional approach to a lasting emptiness filled with subtle realizations that come only after something has finally ended.
The dial gets another twist, filled with feedback and wild sounds, before tuning in to a guitar with an echo of The Velvet Underground and a drumbeat to match. Genre approach The Jesus & Mary Chain circa Darklands, especially with Markey’s most restrained and touching vocal at the start. It explodes caustic vocals and a wall of guitars, so brilliantly that “Papago Psychic Chic” is one of my favorites, if for no other reason than the finale alone. 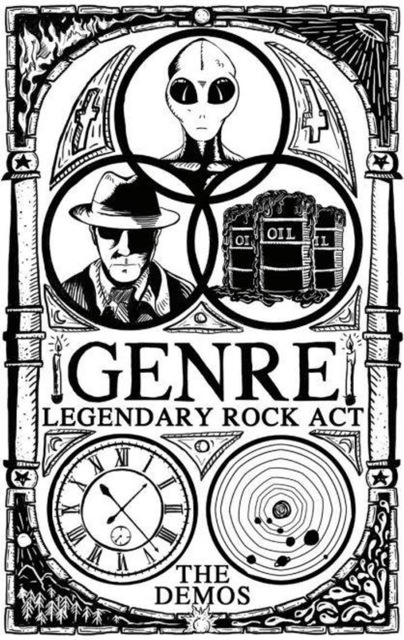 “Marines” starts like a take on Southwestern-soaked Americana, and like every other song here, it lulls you into wondering if it is going to be the ballad. It’s not, and the wall of feedback and guitars nearly overshadows Markey’s vocals here. It’s clearly a heartfelt tune, with lyrics about a friend lost in military action, with the image of that friend remaining as only a ghost in everyone’s mind. It’s haunting, harrowing and still manages to kick out the jams despite such a heavy thought.

Trevor Denton tackles lead vocals on “Gravity Bridge,” and as he was formerly the frontman for Sun Ghost, I’ve been eager to hear this track. Again, the transition is subtle, but it’s a palate cleanser. It’s also a straight-out rocker that doesn’t sneak up. Cosmological concerns are raised once more, involving interstellar time travel and the gravity bridge, of course. While it may end on the nearly horrifying refrain of “All the rest can go die,” this is because the traveller has already discovered “I’m here strictly ’cause of love.” It’s great to hear Denton sing in a band again. The backing vocals at the end serve as icing on the cake as the radio dial is twirled again to land on the next song.

The appropriately titled “Emo AF” is torn between anxiety and depression. The song is much deeper and yes, more emo, lyrically, than it may seem at first. It revolves around a lost relationship but speaks more of the process of dealing with that loss than the loss itself. Musically, it is indie rock, with wailing guitars and synths up front. Everything here is set to make your blood pressure skyrocket.

“Cat Problems 2” continues the theme established in “Cat Problems” from Scrape Your Voices, but it also feels like a continuation of “Emo AF,” as it further explores the trappings of a classic heartbreak scenario, although it’s more self-reflective and objective in its view of the dissolution. It may be a great love, but when you both tear it apart because you bring about the worst madness in each other, it’s best to walk away.
“Speak Now” is an example of how Genre has a knack for slamming some of their best material inside a two-minute song. It’s pure pop punk and it’s catchy as hell. This is easily my favorite radio-ready song here, and it’s not surprising that it was the natural pick for the first single. Not unlike “East Coast…” the song leaves you wanting more, and you may have to spend time away from the album sometimes, so that you can play it over and over again.

“Royal Plain” is the finale, and it’s the perfect conclusion to Legendary Rock Act, as a straightforward rocker that is single worthy. As hard as it rocks, the backing vocals apply a pop esthetic that makes it even more engaging. It’s another number with more sardonic commentary. The lyrics, delivered at breakneck speed, are pure poetry. While it is the last proper song on the album, Genre have once more added a secret song, which I have mixed feelings about, at best. I’m more impressed by the experimental noise orchestra that goes on for nearly two minutes, until the magic space receiver tunes in to the ridiculous coda. But it wouldn’t be Genre if after this intense and heavy record they didn’t still have a sense of humor.
This record takes the band to a completely new level, with an overall ferocity they’ve only hinted at before. Their music has always been authentic, but in some instances it felt like it was hiding from itself. Here there is no holding back. There is a density to this record and a notable aspect of maturity, both compositionally and psychologically.