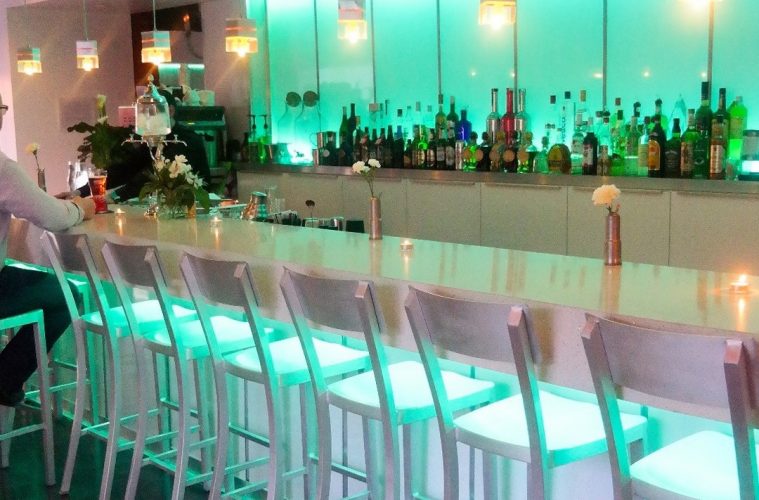 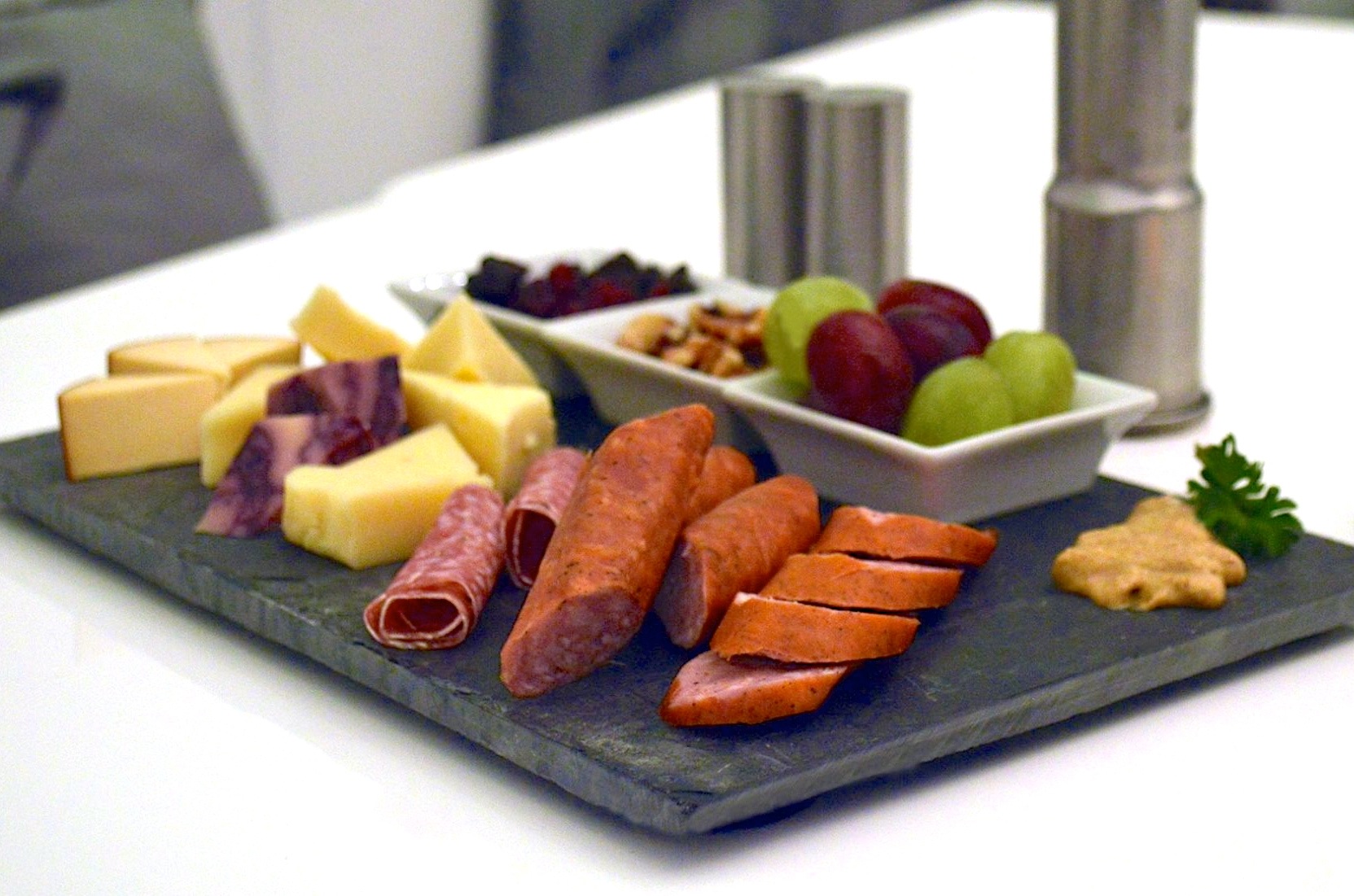 About a year ago, a super sleek Slavic restaurant and watering hole called Milk Bar opened up in a tiny building near McKinley and 3rd Street. I love perogies (who doesn’t) and couldn’t wait to try them. And then life happened. So here it is a year later, and I’m still craving perogies. I round up my merry band of willing eaters, drinkers and design fiends, and head off to try the Polish treats housed therein. After several visits (and at least 10 rewrites), I’m still not entirely sure what to say about Milk Bar.
Here’s what I know for sure. Milk Bar is the latest iteration in a Polish tradition of comfy, cozy outposts for affordable food and drinks, usually featuring milk. Never intended to be fancy, these homey spots were community centers, in the style of public houses in Great Britain. After the fall of communism, milk bars became kitschy throwbacks, but still offered affordable food for the masses. So Milk Bar pays homage to this style of straightforward, unpretentious food and seeks to become a hub of conversation, friendship and, of course, food and drink.
Milk Bar looks like a charming spot someone picked up in Europe and dropped in central Phoenix. It’s gorgeous, replete with white surfaces and loads of color-changing LEDs to tweak the mood. An all-white bar perches next to white tables (perhaps eight of them, at most) and gorgeous metal chairs. A wall made of charming white milk bottles beckons you to the outside patio, and on your way you’ll pass an impressive Warhol-styled artwork featuring Pope John Paul (a Polish folk hero at this point). Two silver fatted calves straight out of a swords-and-sandals epic guard the outside of the bar. It’s impressive. As are the two private rooms secured by velvet ropes that adjoin the restrooms, with a Space Age–looking chrome dairy milker repurposed into a stunning fiber-optic light. 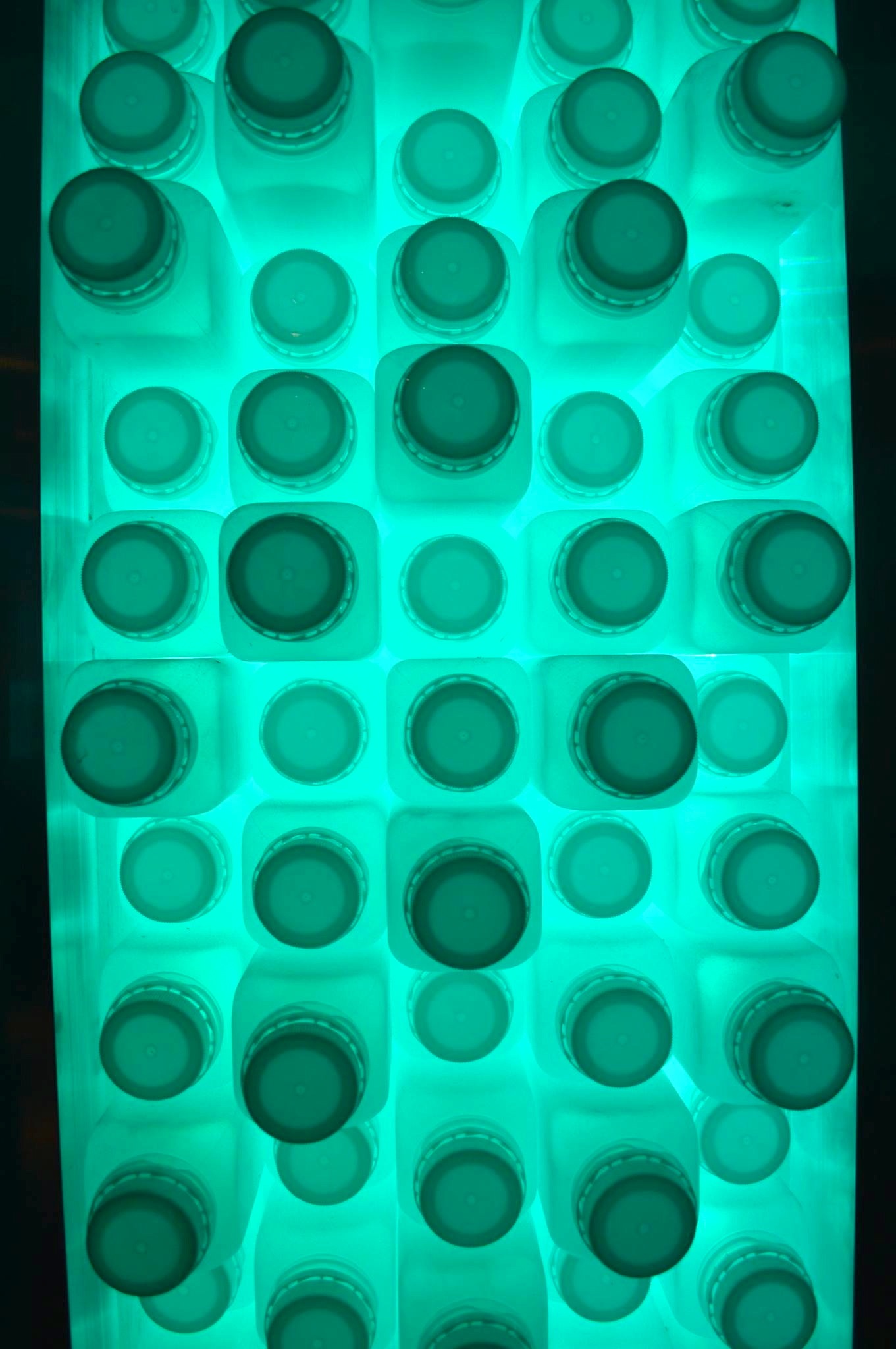 The restaurant is only open for dinner, and we were surprised to see a bevy of parking meters. We were informed by a very charming bartender that yes, the city will ticket you, and yes, you have to pay until 10 p.m. Mercifully, since these ancient parking meters only take coins (who does that?), she had a giant stash of coins just for the meters.
We were excited to be there. The place is gorgeous and the drinks seemed amazing. The Dirty Commie Martini ($12) came highly recommended by several regulars at the bar, who insisted we try it because, they said, there is nothing like it in town. They also indicated they only drink here. More on that later. This martini is a stunner—a mélange of vodka, pickle juice, and raw sugar, with a smattering of dill atop that creates an olfactory impact. It’s herbaceous, warming, homey and really tasty. So is the Matkas ($8), a milk-based sweet cocktail perfect for summer sipping, which comes topped with a tiny triangle of milk chocolate, best swirled in the drink before consuming. I’ve never been compelled to drink vodka and milk, but when it’s this good—I’m sold.

And as for the food? There are some clear winners. Like the Klupski Sliders ($14.95), two meatloaf sliders loaded with sliced Gouda and served on a soft roll with a side of fries. The sliders are meaty and delicious, and every bit as good as they sound on the menu. The room-temperature fries, not so much. After a do-over, they were excellent. However, they were not salted. Let’s face it, fried potatoes need salt. But that is easily remedied (and eaten).

The Cheese and Potato Perogies ($3 for three) were excellent—pillowy perfection, a carb within in a carb with a smattering of bacon on top. Is that heaven? It is with the vodka cream (skip the meh sour cream).

The Burak Beet Salad ($7) was actually the crowd favorite on each visit. Ribbons of perfectly pickled beets, nutty goat cheese, walnuts and perky vinaigrette create a huge winner. If you could add a protein, I bet every Paleo/Keto/Adkins enthusiast in town would add this to their rotation. 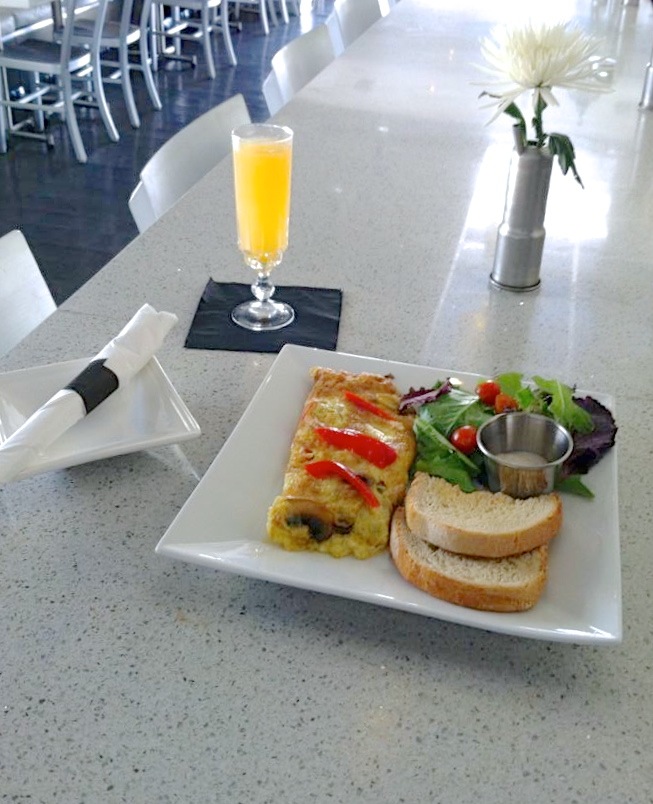 The Bukiet ($5) salad is a quartet of pickled lovelies, including the stellar beet ribbons, whole mushrooms, cucumber pickles and a toothsome slaw that disappeared first. This quality at this price feels like a steal, and quite frankly I couldn’t stop ordering them.

The Bigos ($7.95) is allegedly a hunter’s stew. I say that because while meaty, stews usually have some form of gravy, and this does not. It’s more like a slightly loose country paté. Don’t let that discourage you—the sliced bread perched in the dish is perfect for dipping. It’s a tasty, robust meat dip. Not that it’s a bad thing, but it wasn’t nearly warm enough to be considered a soup or a stew.

The Meat Cheese Board ($14.95) is precisely what you’d expect—gorgeous hunks of rustic sausages, salami, kielbasa and cheese are dotted with quirky toothpicks. A small dish of slightly crunchy and candy-sweet raisins comes alongside. If I had grown up eating these instead of the ones that come in the ubiquitous small cardboard boxes, I would probably still like raisins. It was odd, not having any bread or crackers with a meat and cheese board, but we were happy to roll with it. 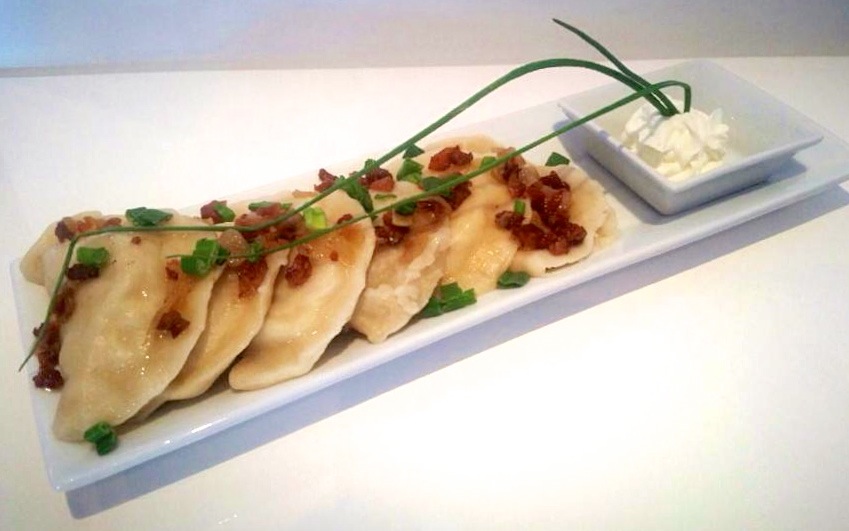 The Cabbage Roll ($7.95) comes covered in a white country gravy, and it is succulent and delicious. That is, when it isn’t cold. Tender ground beef, spices and enough rice just to hold it together. When served at the right temperature, this is good. Almost nearing excellent.

Sadly, service was never attentive here, unless I sat at the bar. Having the attention of the bartender made all the difference in the world. The drinks are stellar, the surroundings are gorgeous, and the food—when it comes out of the kitchen at the right temperature—is bordering on truly special. However, if you aren’t fortunate enough to sit at the bar, expect long waits. I guess, in the overall scheme of things, this isn’t bad, but when it takes so long to get your food that it arrives room temperature, it starts to be a question. 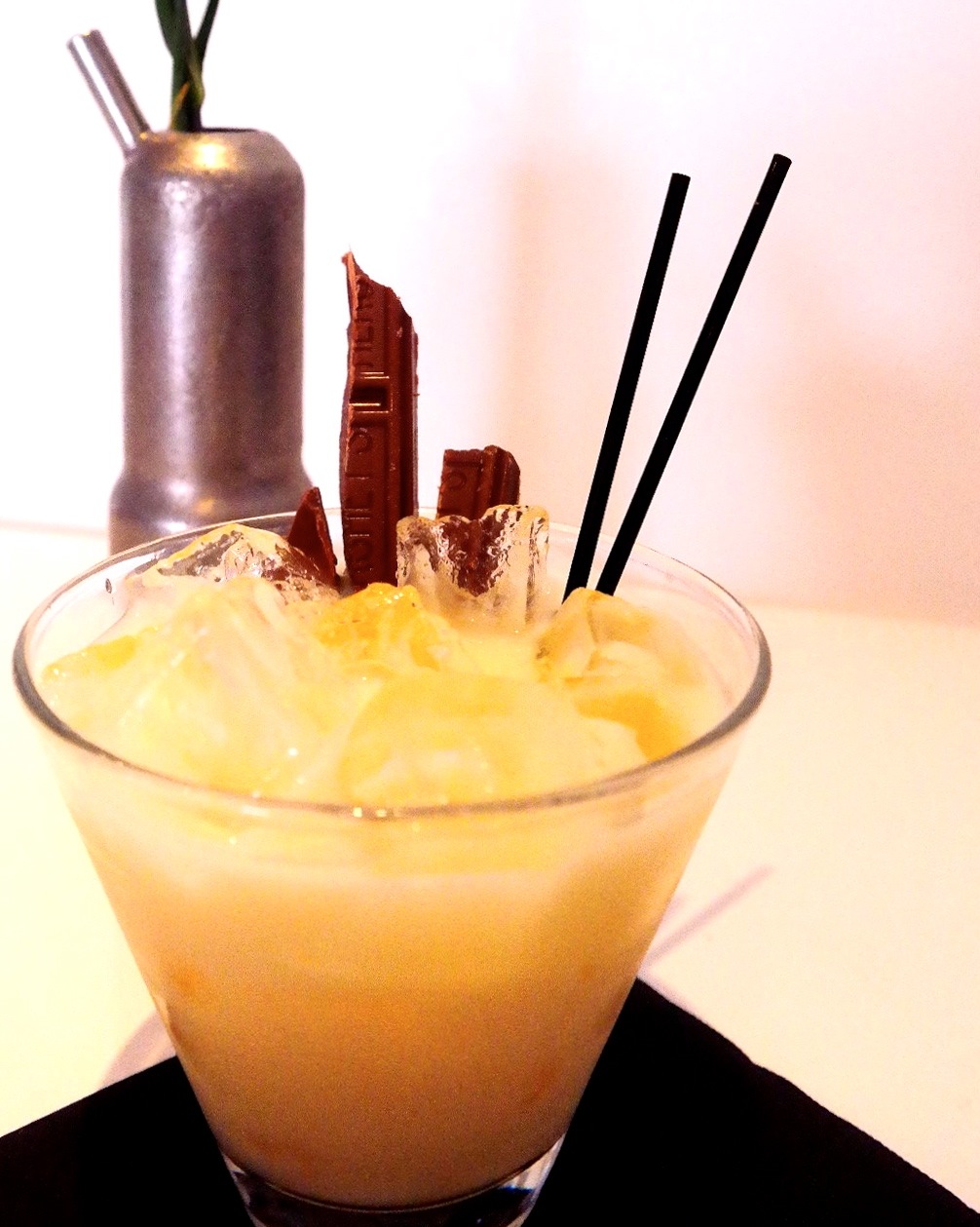 On every visit, I’d see people on the substantial patio just give up and come inside to order. Whenever we actually sat at a table, at no time were our water glasses refilled. We were never asked about a second round of drinks, or even if we wanted dessert or coffee. There’s being busy, and then there’s missing out on substantially increasing per-person revenues. It’s the difference between a successful restaurant and a “For Rent” sign.

It made me wonder if that is the reason why the regulars we met at the bar only come to drink. It’s too bad, really, because I feel like Milk Bar is this close to something truly unique and aspirational. Adding another server or expediter should solve these issues. And I hope that happens, because I want to love Milk Bar! 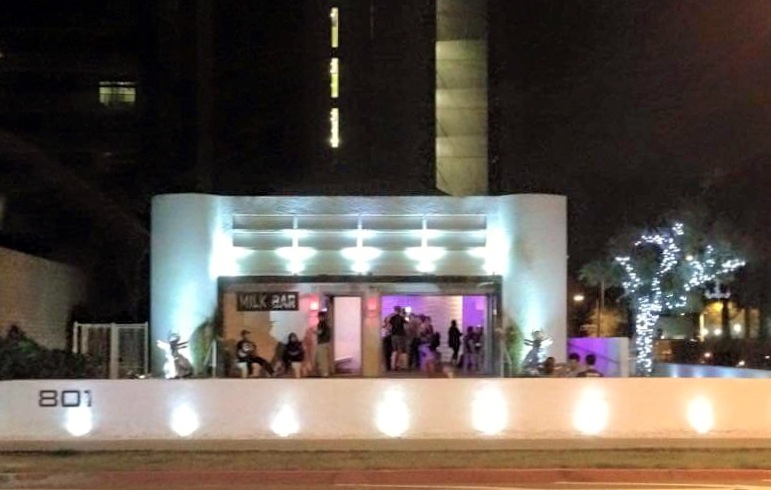