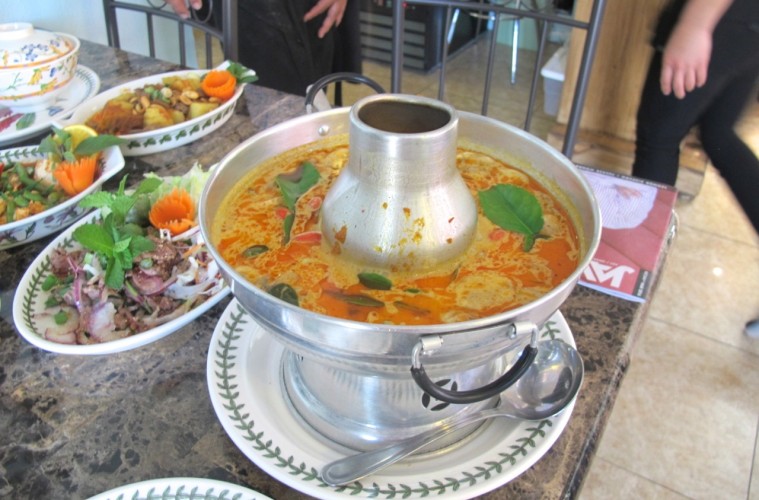 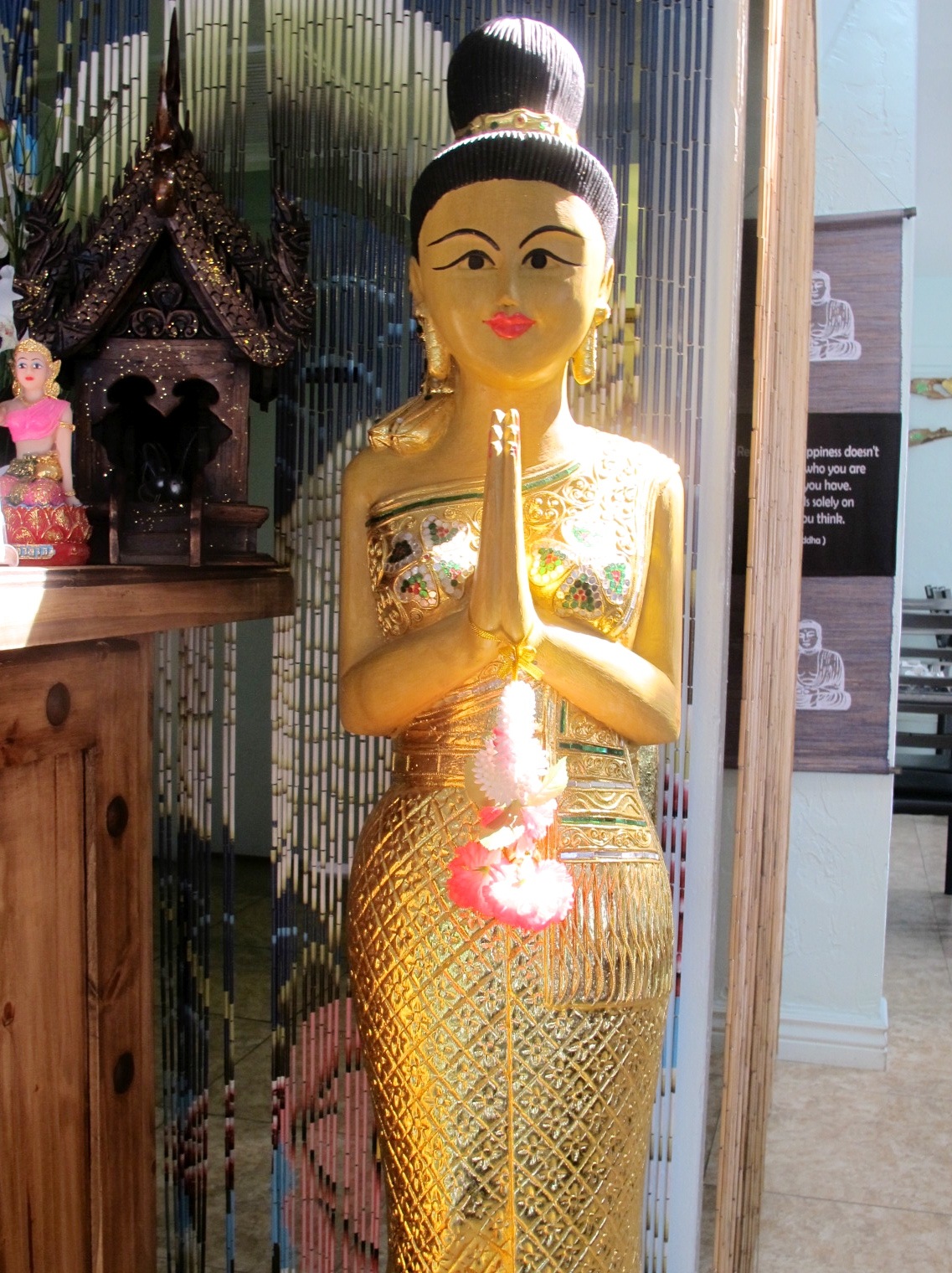 According to a well-known restaurant superstition, some locations are cursed. I’ve never believed it, but there is a tiny house-turned-restaurant spot that has been several pizza joints (some good, some bad) since I moved into the neighborhood. When America’s Taco Shop took over, I was certain the spell would be broken. And when it closed, given their great reputation and food, I began to wonder if there might be some merit to the thought that certain locations just aren’t meant to be restaurants. I’m hoping this latest incarnation can forever fix what may have marred this tiny, well-placed spot in the past.

Thai Long-an manages to pack in 10 slightly undersized four-top tables and a hostess station. You’ll notice how small the tables truly are once your meal and its many components appear. But you’ll hardly mind once you begin to dig in. The small tables are almost a plus, since it’s easier to sneak a nosh of your dining companion’s food.
Thai Long-an has all the usual suspects, like a stellar Thai Iced Tea ($3). Theirs is a textbook version, minus the slightly bitter taste that comes from concentrate (discovering the mix at Lee Lee’s grocery finally explained that bitterness). Plus there’s a wider range of imported beers here than I would have thought. You’ll need the Singha ($4.95) to wash down the impending fiery heat. 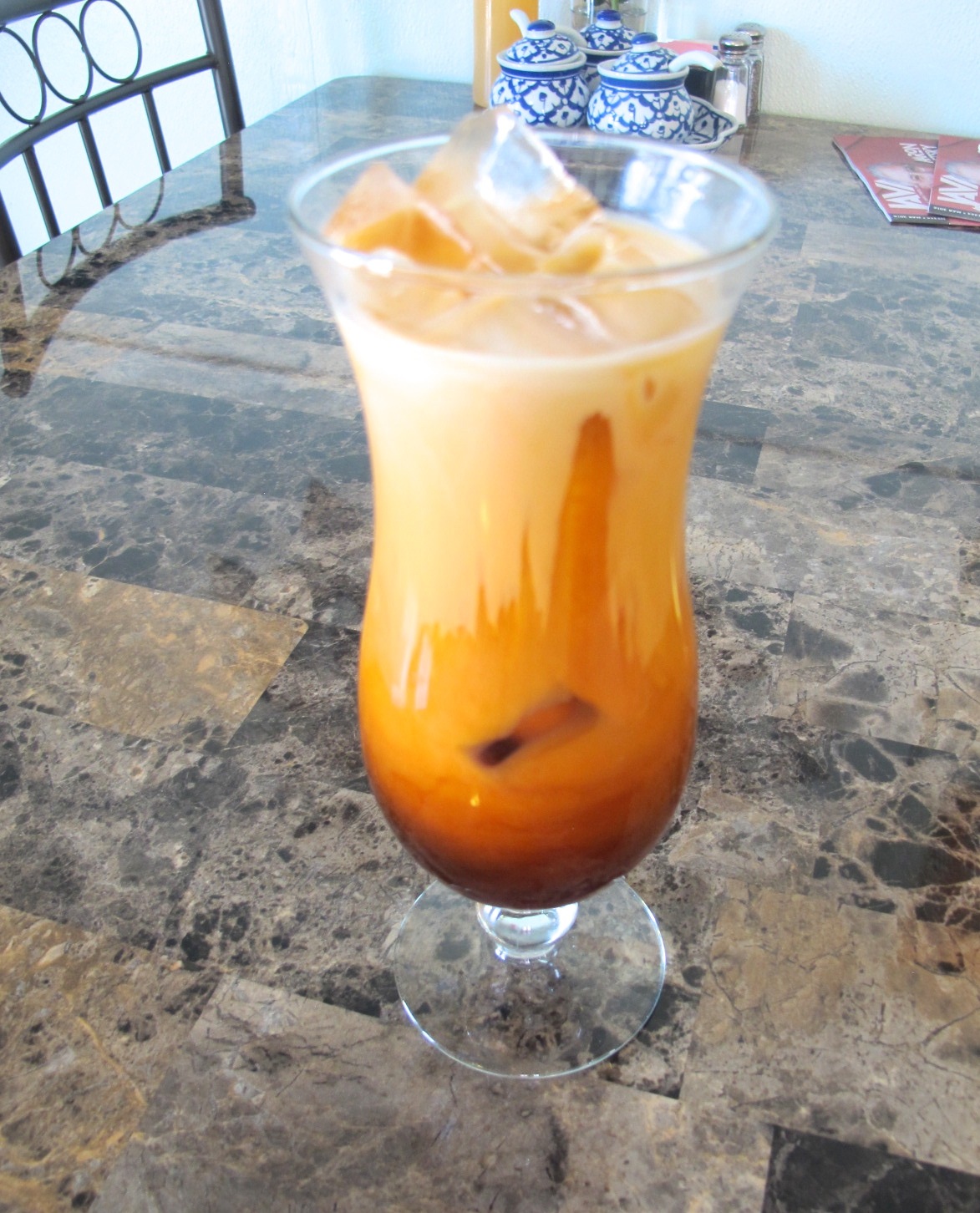 Thankfully, most of the appetizers ease you in. The Thai Toast ($8.95) is excellent. Their version comes coated in panko breadcrumbs and loaded with ground pork instead of shrimp. These tasty winners manage to be crispy and still melt in your mouth. The Egg Rolls ($5.95) are standard fare—well made and tasty, but not nearly as stellar as the Crab Rangoons ($7.95), which are head and shoulders above others. I’m not sure how they accomplish this, since there are only three ingredients in play (cream cheese, imitation crab and the wrappers). Whatever magic makes this happen is worth the price. Same with the excellent, slightly kicky peanut sauce that comes alongside.
Perhaps the best indicator of the impending inferno comes in the tiny side of ubiquitous cucumber slaw. This version has sliced chili on top. Note to self: when the cooling accouterment comes spiced, the kitchen is telling you where their heart lies.

I like heat, don’t get me wrong. I’m a confident 3, on most scales of 1 to 5. Even at Thai E-San, the home of mega hotness, I’m a solid 3. It’s the kind of heat that you feel, but doesn’t leave you gasping for air. I’ll be frank—several of the 3s here left me gasping. And given that this was true on multiple visits, I’m smart enough to keep my beer close, and my squirt bottle of slightly sweet “sweet and sour” house sauce on the ready to beat back any raging fires. 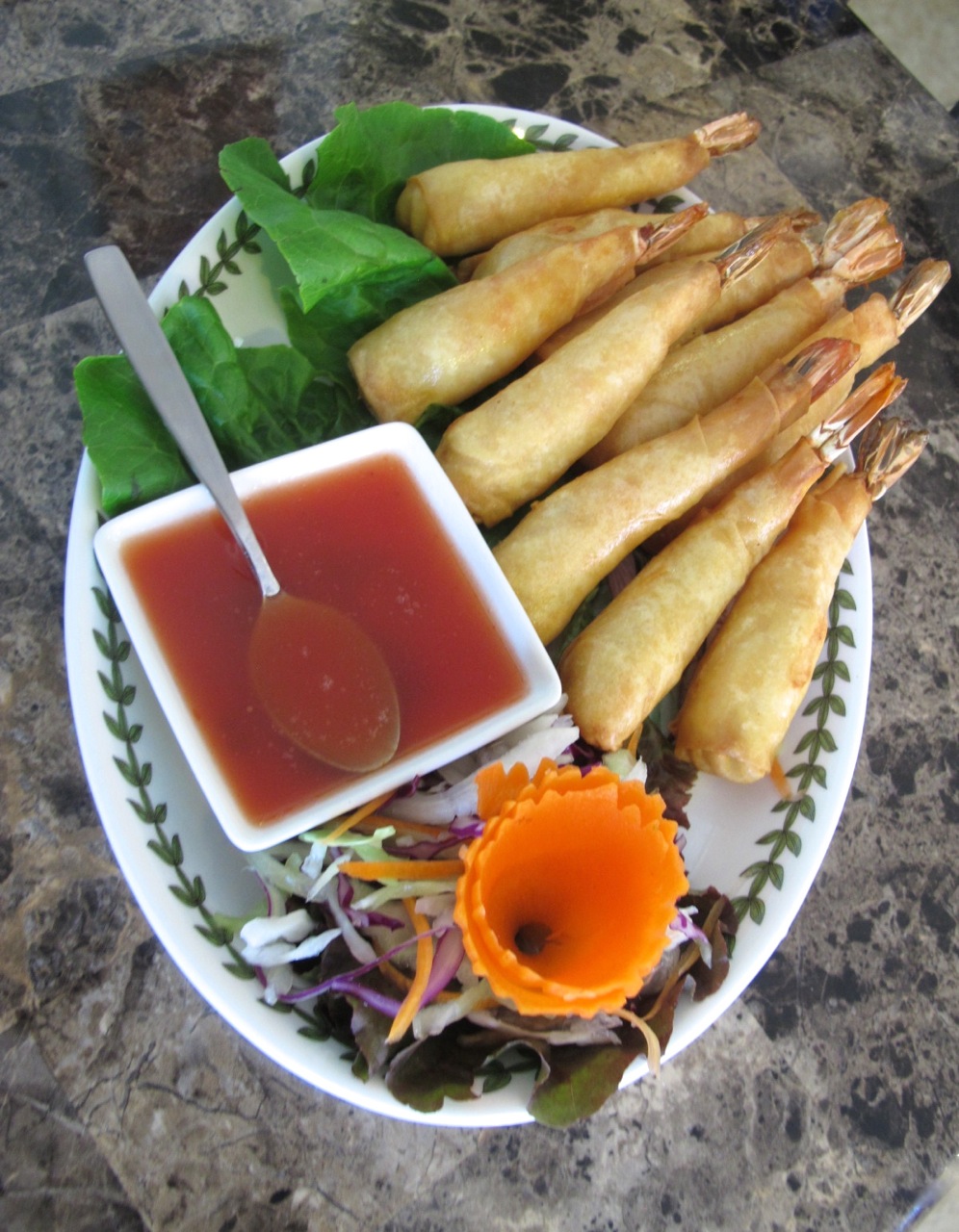 On Tom-Kha ($10.95 with chicken) usually you expect the coconut broth to mediate some of the spice factor. Not a chance here. Loads of tender chicken, mushroom, lemongrass and galangal come in the familiar silver cooking ring, heated by Sterno. You’ll notice the bright red color right away, and interestingly enough the soup gets hotter the more you eat. “I can’t stop!” said my friend. I wasn’t sure if he meant he couldn’t stop because it was so flavorful or because it was so hot, like “I can’t stop my lips from peeling.” Honestly, I barely heard him because I was too busy slurping from my bowl and then sipping beer to stem the burn.

Lest you think that 3 is merely the point where heat begins, the Pad Thai ($10.95), at a 2, was still shooting sparks. My heat-seeking dinner date proudly proclaimed this one of the best Pad Thai’s he’s had in town. Realistically, consider ordering a number down. Maybe it’s just me, but there’s a point at which the flavor is a second to the ferocious fire in my mouth. I love the heat. I just need to be able to eat it. 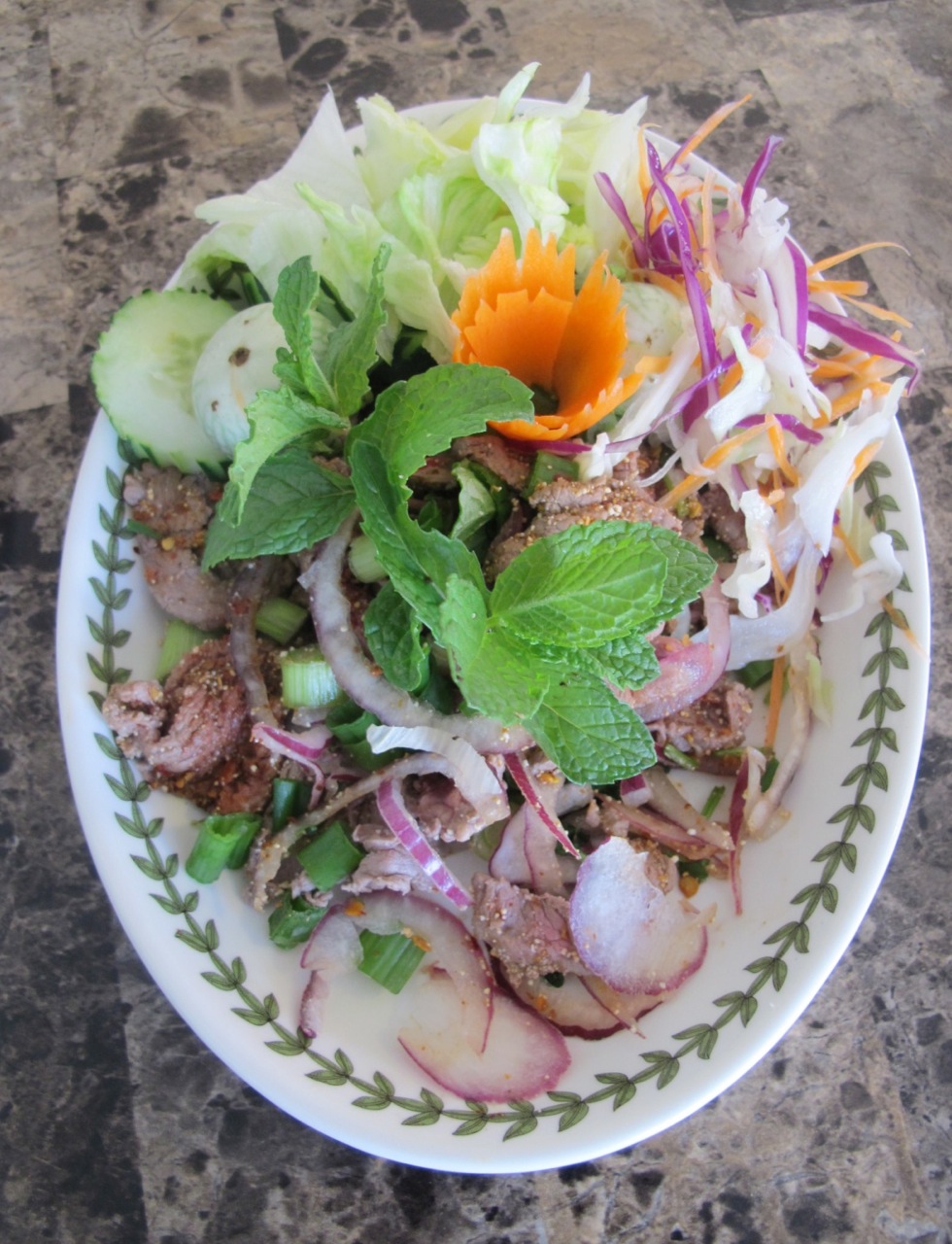 Our adorable server indicated that the Roast Duck with Red Curry ($13.95) was their most popular dish, and I understand why. An impressive amount of duck is simmered into a dizzying array of herbs, chili, tender veggies, and a handful of sliced pineapple to create a slightly sweet symphony of savory goodness. Spooned over rice, it’s nearly magical.

Salad fans will happily enjoy the Papaya Salad ($10.95). I picked Bangkok style with shrimp, peanut and Thai long bean, and received a rather large plate of shredded green papaya, carrots, a smattering of long bean—and a giant pile of red chili. The perfectly cooked shrimp were in the nearly impossible to achieve c-shape, and ground peanuts provided texture and crunch. However, at a 3, this salad was too hot for me. I lasted three bites before it was too much. I took it home, and overnight it got even hotter. My remedy to the caustic hotness was to shred even more cabbage into the mix and remove all the chili. I still managed three bites at a time before I had to take a break. I’ll be honest here: it’s been a long time since a 3 brought me to my culinary knees. And this salad did. I’d order it again, at a 1.5 or, if I feel lucky, a 2. If it weren’t so yummy, I would have given up and tossed the remnants in the bin.

One caution: If you visit, note that the chicken satay ($9.95) is missing some of Thai Long-an’s usual magic, with rail-thin slices of anemic chicken stretched onto skewers. I’d skip these until something in the preparation changes. 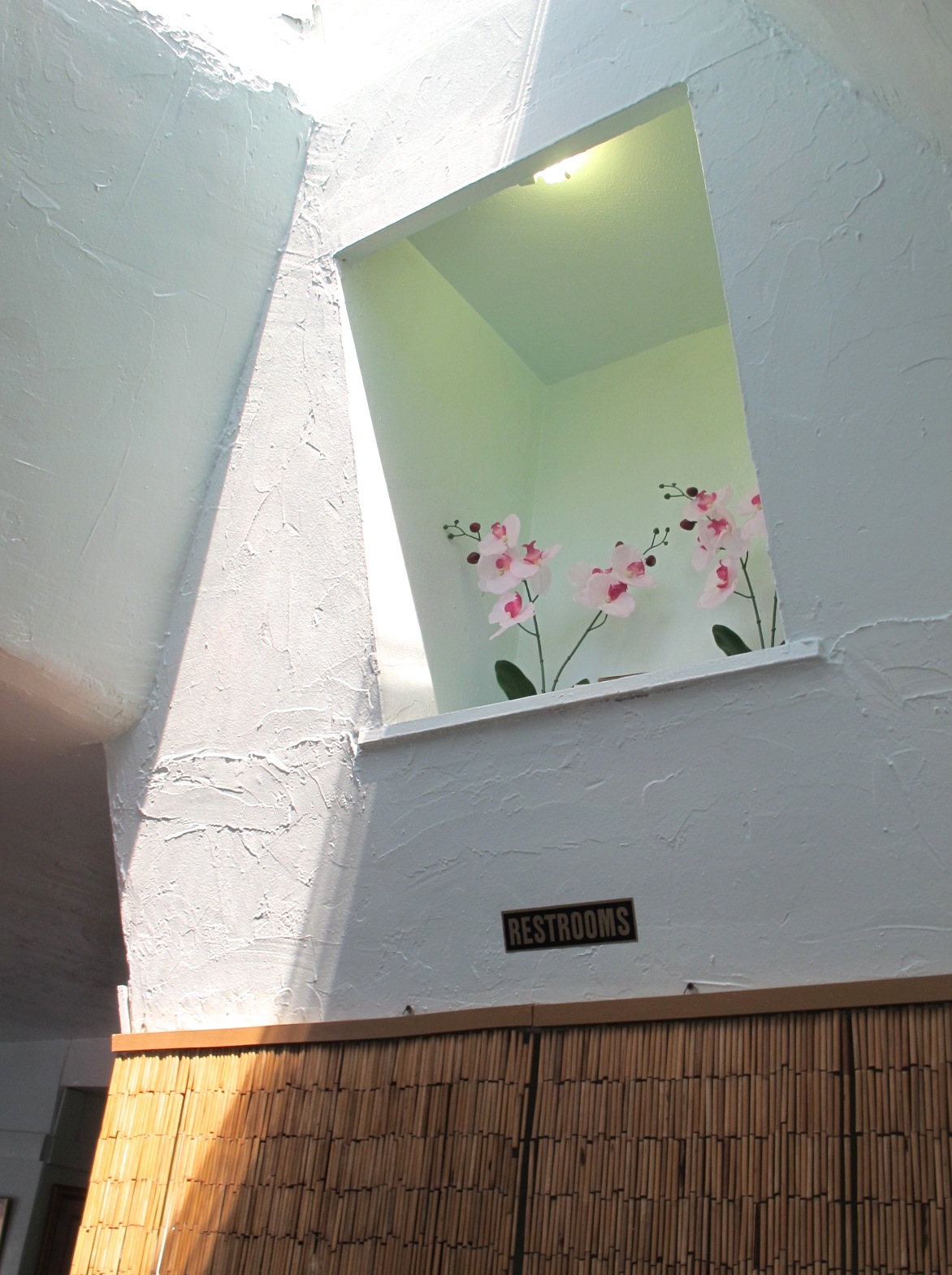 I’m still not convinced that the restaurant location superstition is rooted in any kind of reality. The restaurant biz is a risky game, and over 50% fail in the first six months. Not very lucky, right? I also know that garlic is supposed to keep away vampires. And maybe for this location, spicy chili is the key to driving away bad luck. I hope it’s true; Thai Long-an is a compelling place with a lot of tasty things going for it. 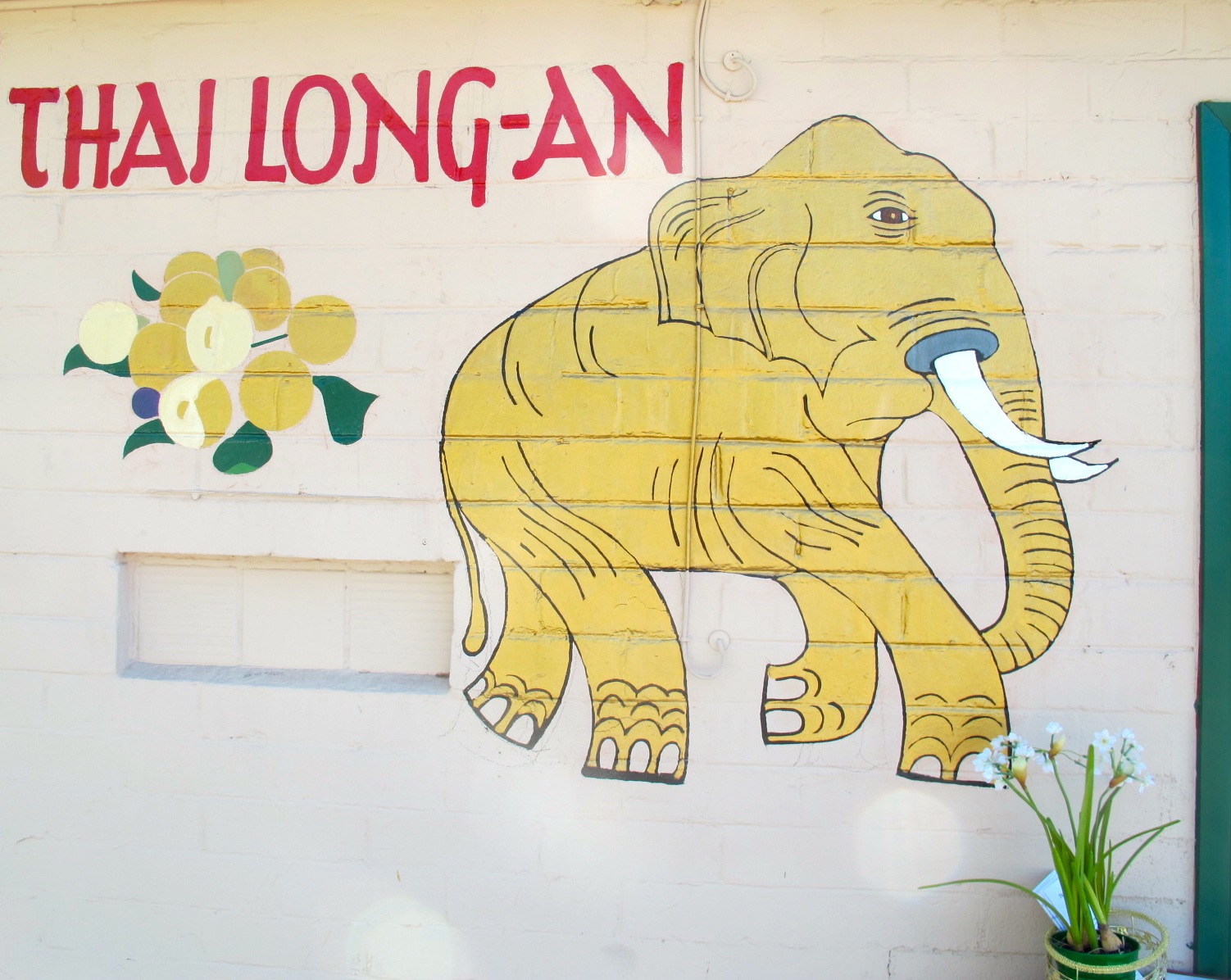